Unsurprisingly, The Cavern gets busy and they charge a £2 cover fee. However, there is almost always live music, even in the middle of the day in the middle of the week, and the atmosphere is unbeatable. You can find out more on The Cavern Club website.
Definitely one of the most historic and picturesque parts of Liverpool, the Royal Albert docks opened in 1846. It’s the largest collection of Grade I listed buildings in the UK. The docks have a dark history, forming a major part of the British Slave Trade. Today, the docks have a much better use – a place of culture packed with museums, restaurants, and bars. The Albert dock extends into the area known as the Pier Head. It’s a lovely river-front walk with more sights, museums, and eateries. 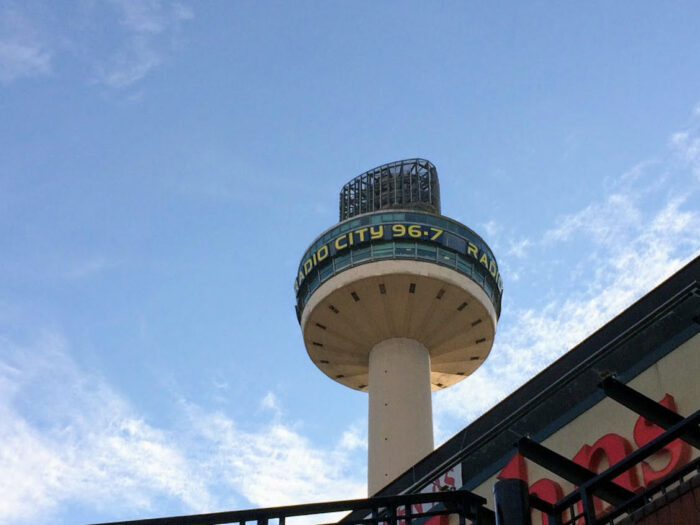 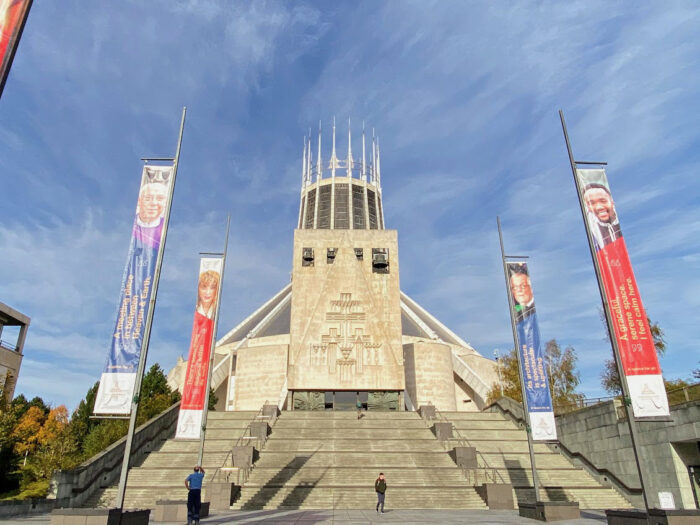 In all cases, you have to get yourself to Anfield from Liverpool City centre. If you want the easy option, take an Uber or taxi for around £7-£10 each way. Otherwise, the bus is quick and cheap. Take the number 17 bus from Queen’s Square. They run every 10 minutes and cost about £2.50 each way. You can find out more travel info on the Liverpool FC site.

2. Take the Ferry Cross the Mersey

The Liver Building, together with the Cunard Building and the Port of Liverpool Building, form the Three Graces, three of Liverpool’s gothic-style, waterfront buildings from the 1900s. Try to spot all three as you wander along the Pier Head.
Like this? Share it on Pinterest…

3. Go inside the Liver Building

Historically, members of the public were not allowed into the Liver Building. (I was lucky enough to go in because my sister worked there for a while). However, in 2019 the building opened up and you can now take a tour, which includes 360 panoramic views at the top. You can book tickets on the Royal Liver Building website. The tour includes a cool digital experience with lights and video. Shiny, shiny.
(Yes, I AM embarrassed by how few posts I’ve written about my home city of Liverpool. Promise I’ll fix that very soon. In the meantime, sign up for my newsletter or drop me a comment below if you have questions).
By the way, you may think the Liver Building is pronounced the same way you’d say Liverpool but it’s not. It’s pronounced lie-ver building. Hell knows why! Liver birds are mythical birds and are thought to be based on cormorants. You’ll see Liver birds everywhere in the city from the city emblem to the Liverpool FC crest.
You can buy tickets for both bus tours on Get Your Guide: Standard Liverpool City Sightseeing Bus and the Liverpool City and Beatles Bus. Both buses include a booklet of money off vouchers for the city so I’d recommend taking the bus at the start of your visit.

Do you know those wonderful City Sightseeing buses that can be found in so many cities around the world? Well, there are two of them in Liverpool so choose wisely. The standard City Sightseeing bus will take you on a 50-minute tour of the city. The other bus takes 1.5 hours and includes a city tour as well as some of the famous Beatles locations. Included are the childhood homes of John Lennon and Paul McCartney, Penny Lane, and a stop at Strawberry Fields, where you can get off the bus to take a picture in front of the famous gates. If you’re a fan, the bus is a great way to see the Beatles sights which are otherwise a pain to get to, as they’re dotted around the suburbs, outside the city centre.
There aren’t many cute bars located on Bold Street but the surrounding streets like Duke Street have lots of cool, indie bars. I have a post about bars and restaurants coming soon, too.
Liverpool One will meet your chain-restaurant needs and the Albert Dock serves up some great restaurant options but if you want to eat like a local in Liverpool, head to Bold Street. Recently pedestrianised, this part of the city is chock-full of independent restaurants and cafes. And most of the world’s best cuisines are on offer. A few of my favourites include Mowgli, Pho, Bakchich, and Rudy’s. Leaf and Coffee on Bold Street are popular cafes. 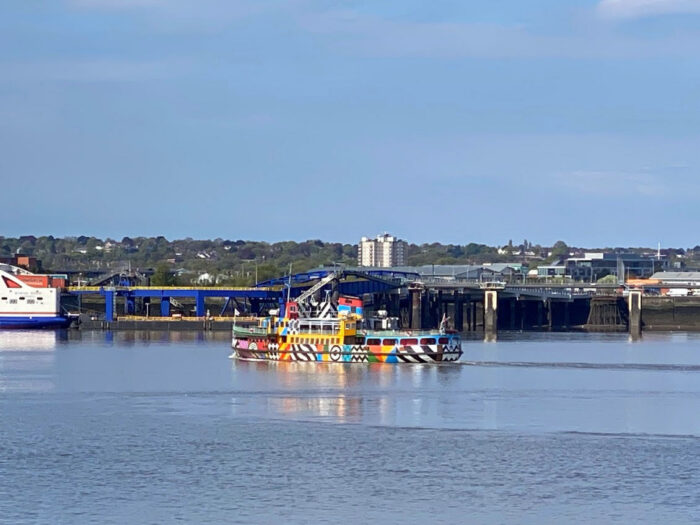 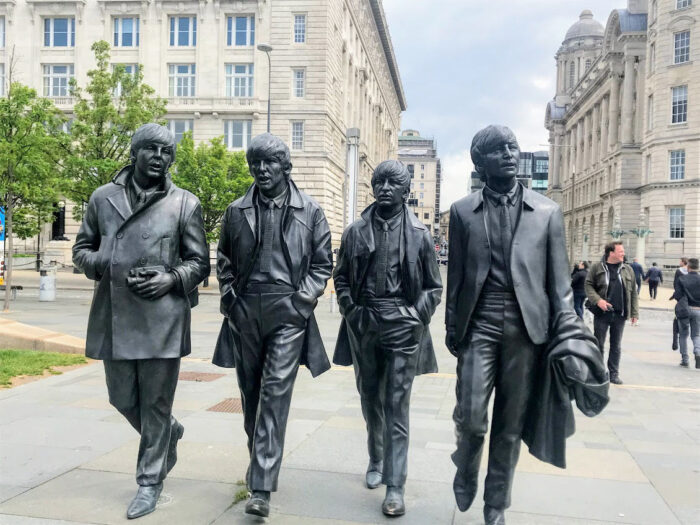 6. Catch live music at The Cavern Club on Mathew Street

That’s my guide to the best things to do in Liverpool. I hope you enjoy your first visit to the city. But most of all, I hope it will be the first of many. Got any questions or suggestions? Let me know in the comments below. 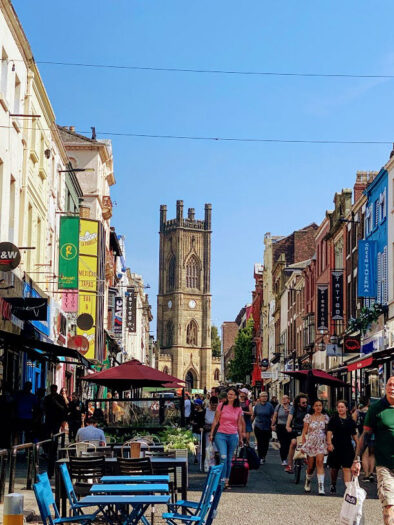 If you want the tourist experience (trust me, you do), take the 50-minute River Cruise Experience. It doesn’t just take you across the Mersey, you go on a waterfront sightseeing tour, which includes audio narration. I suggest booking ahead on Get Your Guide. It’s the same price as the official site but you get mobile tickets and easy cancellation. The tours leave on the hour every hour. The cheaper alternative is to take the commuter ferry. It costs around £4 return but you need to go before 9 am or after 5 pm. If you take this option, just stay on the ferry and come back. You’ll have to make up your own stories as there’s obviously no tourist audio on the commuter ferry. Extra points if you can do it in a scouse accent. Details on the Mersey Ferries website.
Liverpool Cathedral I have visited many times. Nope, I’m not especially religious, it’s just one of those sights I feel like every visitor should see when they’re in Liverpool, so I’ve taken most of my travel friends there. It also helps you to explore different parts of the city including cool shopping and restaurant areas. 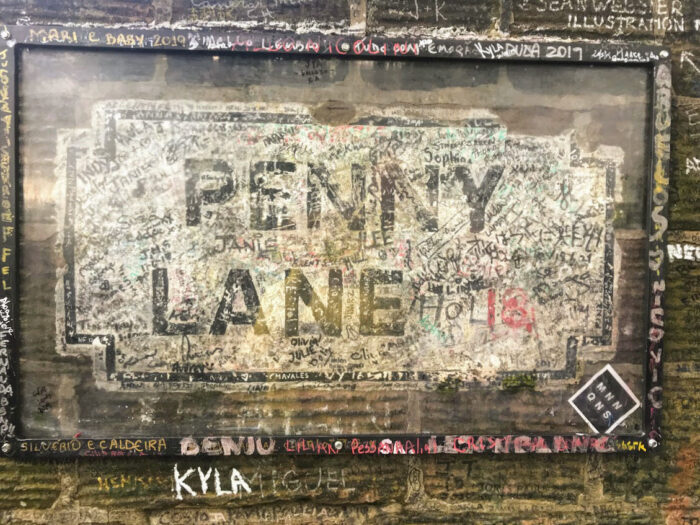 Am I a red or a blue? I’ve been asked this question in the strangest places all over the world. Red means I support Liverpool FC and blue refers to the local rival team, Everton. I am a red. Why? Not just because they are the better team (cue: football trolls). Your football team is picked for you by your dad when you’re a kid. And that’s the end of that.

Speaking of bars and restaurants on Hope Street, I strongly recommend you at least poke your nose into The Philharmonic Dining Rooms. This pub has repeatedly been named the most ornate pub in England. A well-preserved Victorian boozer, you’ll find a series of small nooks and rooms perfect for a mid-sightseeing break. Don’t be surprised if you see troops of tourists coming in and heading to the gent’s loos (ladies and all). The loos are a Grade I listed example of an old Victorian ‘pisser’ and are frequently visited for their historical significance. Do pop in. Ladies, try to get a male companion (or the barman) to check if they’re busy first. Be aware – these toilets do smell like the 100-year-old pisser that they are. Still got a mask in your pocket? Wear it!
What a lot of tourist guides won’t tell you is that the original Cavern no longer exists – it was closed in the 70s and bricked up as part of construction work on Liverpool’s underground rail network. The Cavern moved a few doors down, which is where it remains today. There was a project in the 1980s to re-open the original Cavern but it failed because the site had become structurally unsound. However, the team salvaged what they could and the current Cavern shares about 70% of the footprint of the original club. So, it’s as good as you can get. 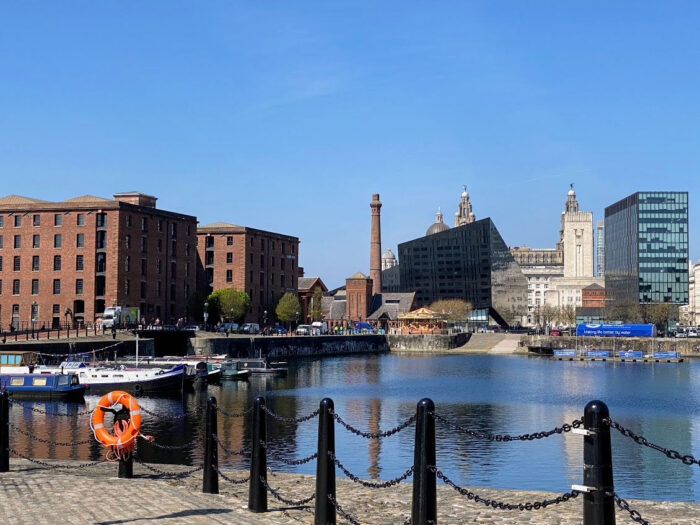 Born in Liverpool, I know the city inside out. Yet, it wasn’t until I came home after spending years overseas that I started to explore my city as a tourist. Showing my travel friends around the city, I finally took time to visit Liverpool’s many tourist attractions. In this guide, I’ll give you the 12 best things to do in Liverpool for first-time visitors. This list is ideal if you’re on a weekend break in Liverpool and want to blend sightseeing with eating and drinking.
Visitor tip: from the Albert dock heading up towards the ‘top end’ of the city, you’ll walk through the city’s main shopping area. Don’t miss Liverpool One and Church Street if shopping is on your itinerary.
First of all, no trip to Liverpool is complete without a walk down Mathew Street, one of the major bar streets in the city; and while you’re there, you might as well pop into The Cavern, the small cellar bar made famous because the Beatles performed there (before they became so big the club couldn’t afford to book them). 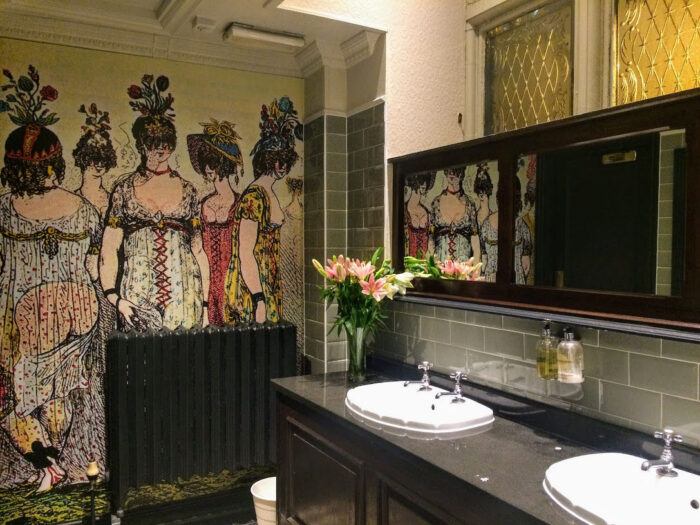 Liverpool parking tip: The car park on Heath Street, just off Bold Street, is one of my favourites in the city. It’s affordable and well-located for exploring. If you want fancy parking (they’ll lend you a brolly if it rains), head to Q-Park in Liverpool One. It’s great if you’re shoppin’ ’til you’re droppin’.

Don’t get confused with the Cavern Pub – just across the road from the Cavern Club is the swish-looking Cavern Pub. The Cavern Club owns the Cavern Pub but that’s the extent of the links to the Beatles. It feels like an overflow pub where they like to send the tour groups. That said, it’s free to enter and also features daily live music. 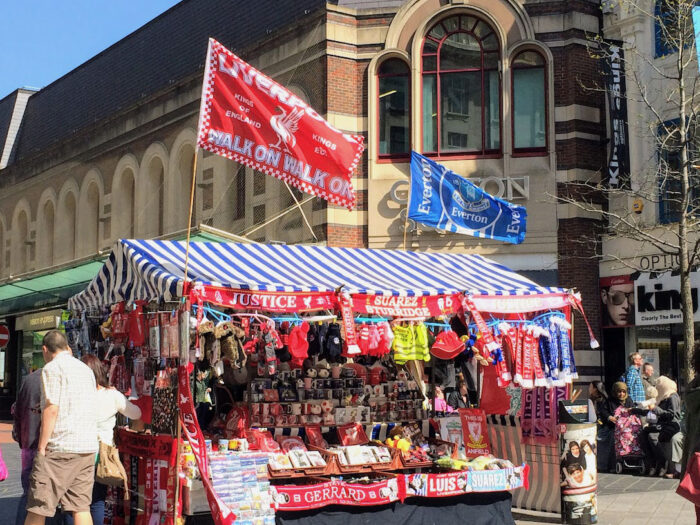 I’m aware you probably think I’m trying to convert you to some sort of special Liverpool religion by suggesting two cathedrals on your visit but Liverpool Cathedral and Metropolitan Cathedral top and tail the same street – Hope Street – and can be ticked off your list in under half an hour. While Liverpool Cathedral is famous for being old and large, Liverpool Metropolitan Cathedral is very modern, circa the 1960s. And that’s why I’m recommending you visit. Known locally as Paddy’s Wigwam, due to the circular shape, step inside and look up – the roof is pure wonder. A spectrum of coloured stain-glass windows bounces light around the wigwam-shaped interior. Do a spin inside then head back to Hope Street, which has some great bars and restaurants.
Most tourists make a beeline for The Beatles Story, a museum in the Albert Dock dedicated to all things Beatles including plenty of things once owned by the fab-four. Personally, I was a little underwhelmed. Mostly because it was smaller than I expected it to be. The Beatles Story is definitely worth an hour of your time and now I’ve explained it’s small, you hopefully won’t be disappointed. You can book tickets here with Get Your Guide. 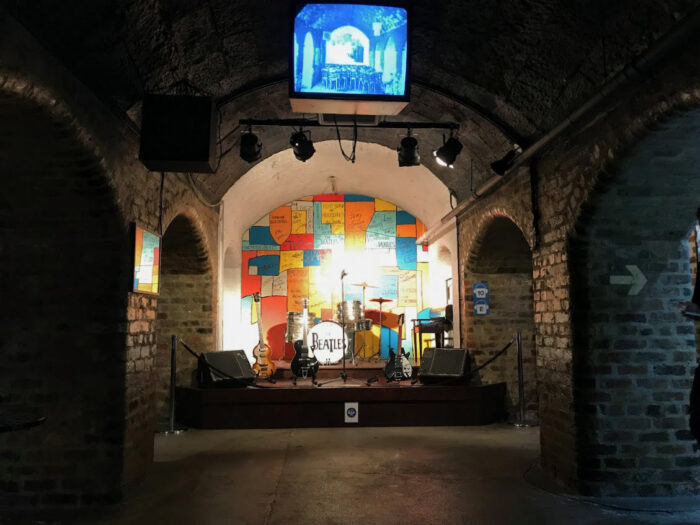 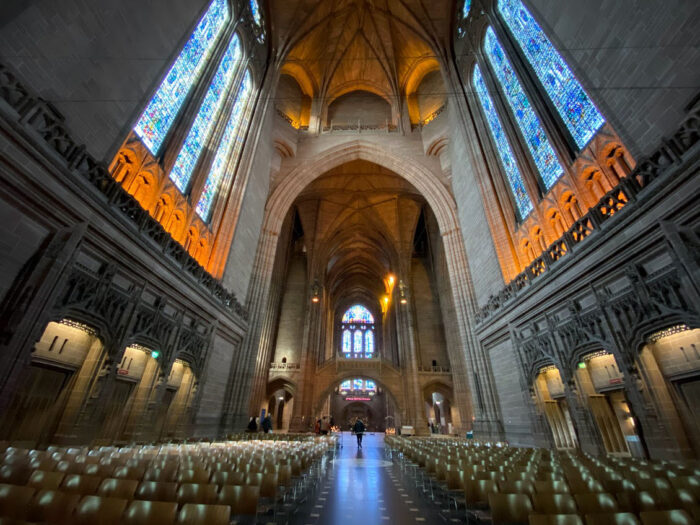 Much to my dad’s disgust, I’ve never been to Anfield – the football stadium that is home to Liverpool FC. But if you’re a football fan, this will probably be at the top of your list of things to do in Liverpool. Like many of the Beatles sights, Anfield is a couple of miles outside the city centre. You can book a standard tour of Anfield on Get Your Guide. Otherwise, there are more customisable tour choices on the Liverpool FC Stadium Tours website.