Skip to content
I took a tour with Monashee Adventure Tours, which is sadly no longer in operation. However, other specialists have offerings in the valley.

Great Canadian Trails
Myra Canyon Trailhead on the Kettle Valley Rail Trail.
Today the Kettle Valley Rail Trail is a National Historic Site of Canada. It traces the journey of a route that was also once a part of the Canadian Pacific Railway – a secondary railroad operating both passenger and freight services in the Southern Interior region of British Columbia from 1915. 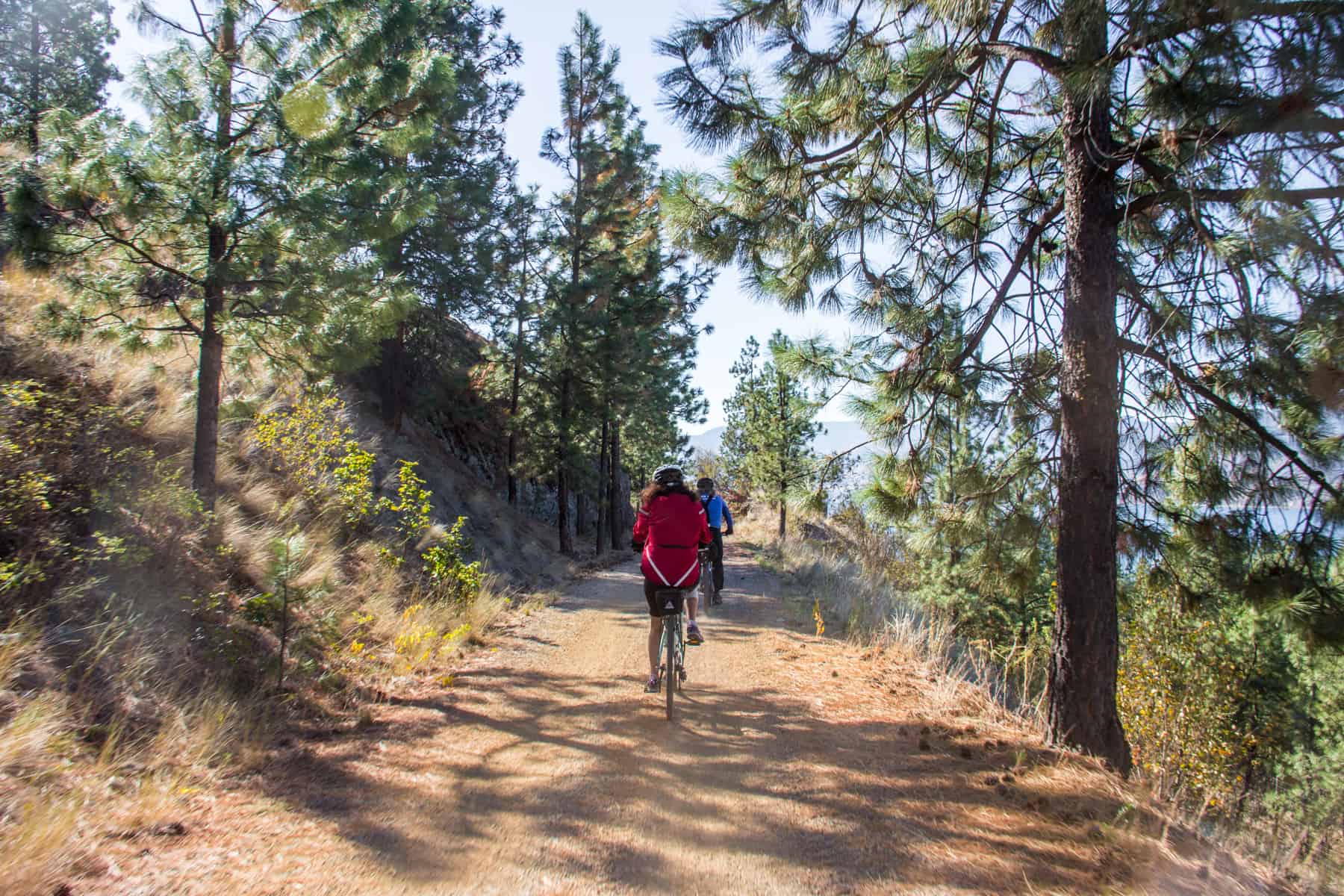 The Kettle Valley Trail covers over 600km, and it would take up to four days to bike the entire route, including overnight stops.

KVR Cycle Tours
The Kettle Valley on the banks of the Kettle River, British Colombia.

History of the Kettle Valley Railway

Rolling hills of the Kettle Valley Trail.
Despite the Kettle Valley railroad’s eventual abandonment in 1990, the already carved and easy-grade route quickly attracted hikers and cyclists eager to explore the mountainous area. 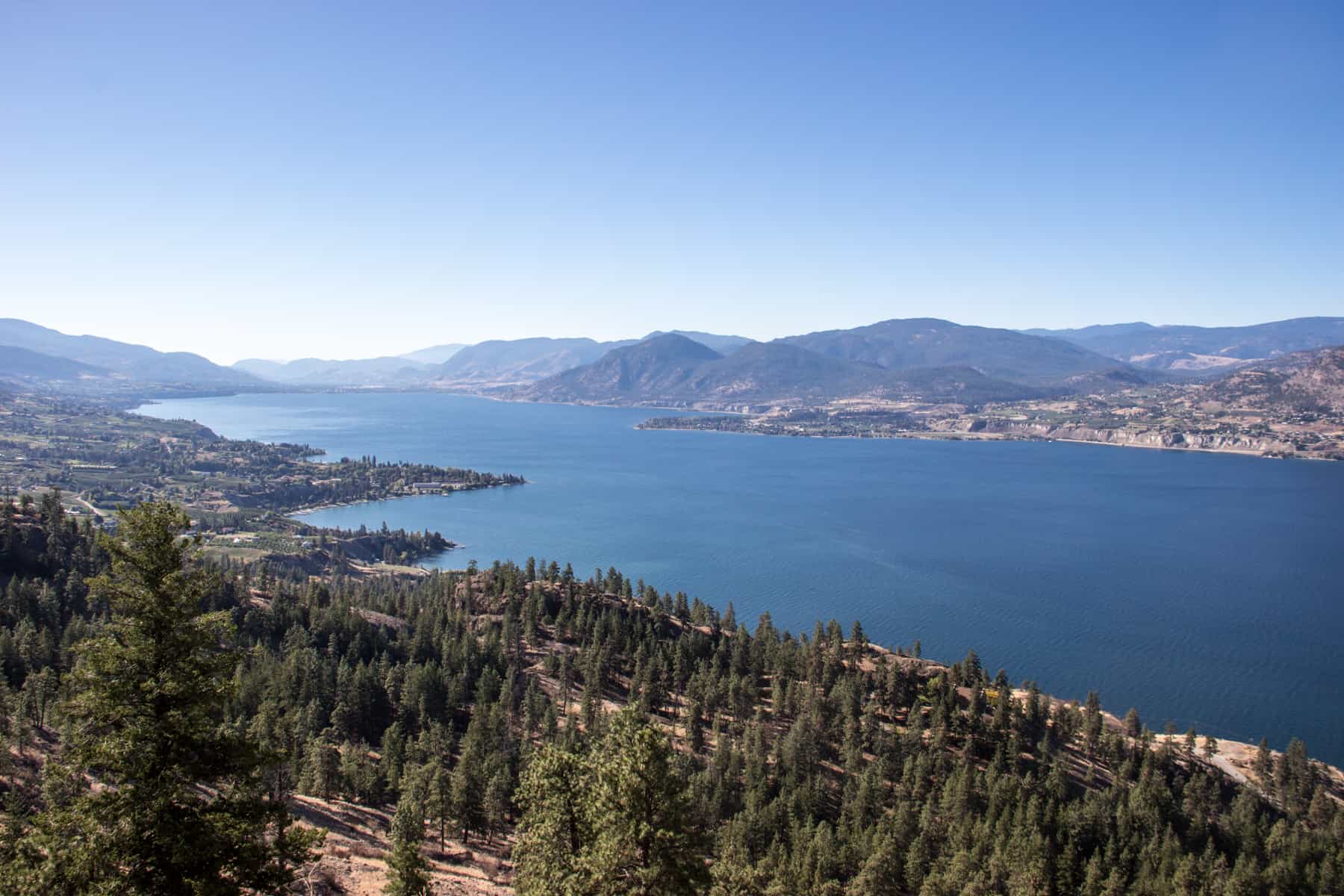 One of the dozens of photo stops on a Kettle Valley Rail bike tour. 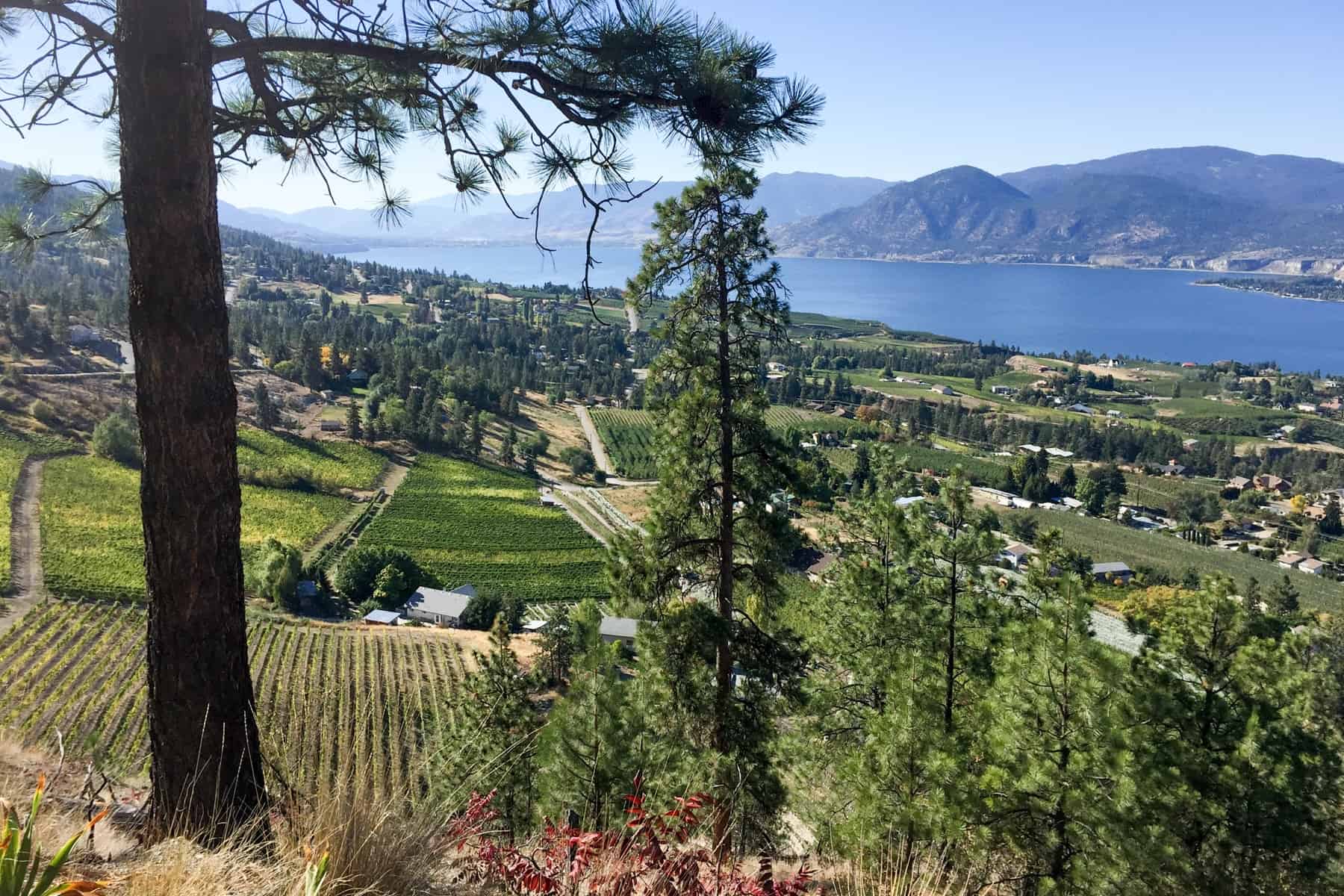 How long is the Kettle Valley Trail?

I’m leisurely biking the route of the old Kettle Valley Railway, cruising in a low gear on my mountain bike along a cliff face overlooking the endless rows of vineyards nestled beside Lake Okanagan. When told about the area’s history, it’s easy to picture the steam rising out of this canyon and the rumble that would have reverberated throughout the valley.
Having spent three days riding the Via Rail from Toronto to Edmonton, it was symbolic to end my time here. 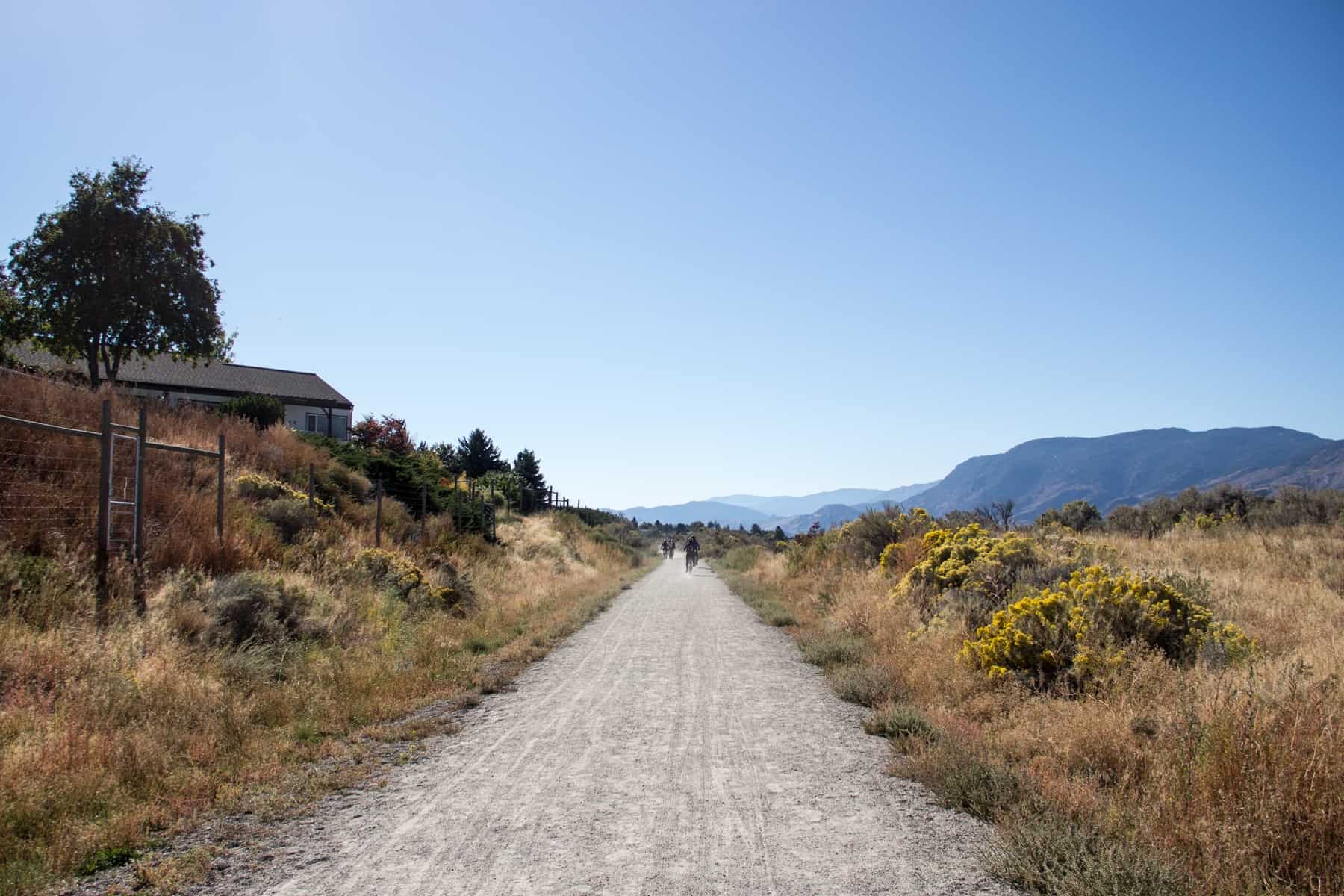 The carved-out tunnel on the railroad route.

The Kettle Valley Railway Trail winds around scenic viewpoints like this. 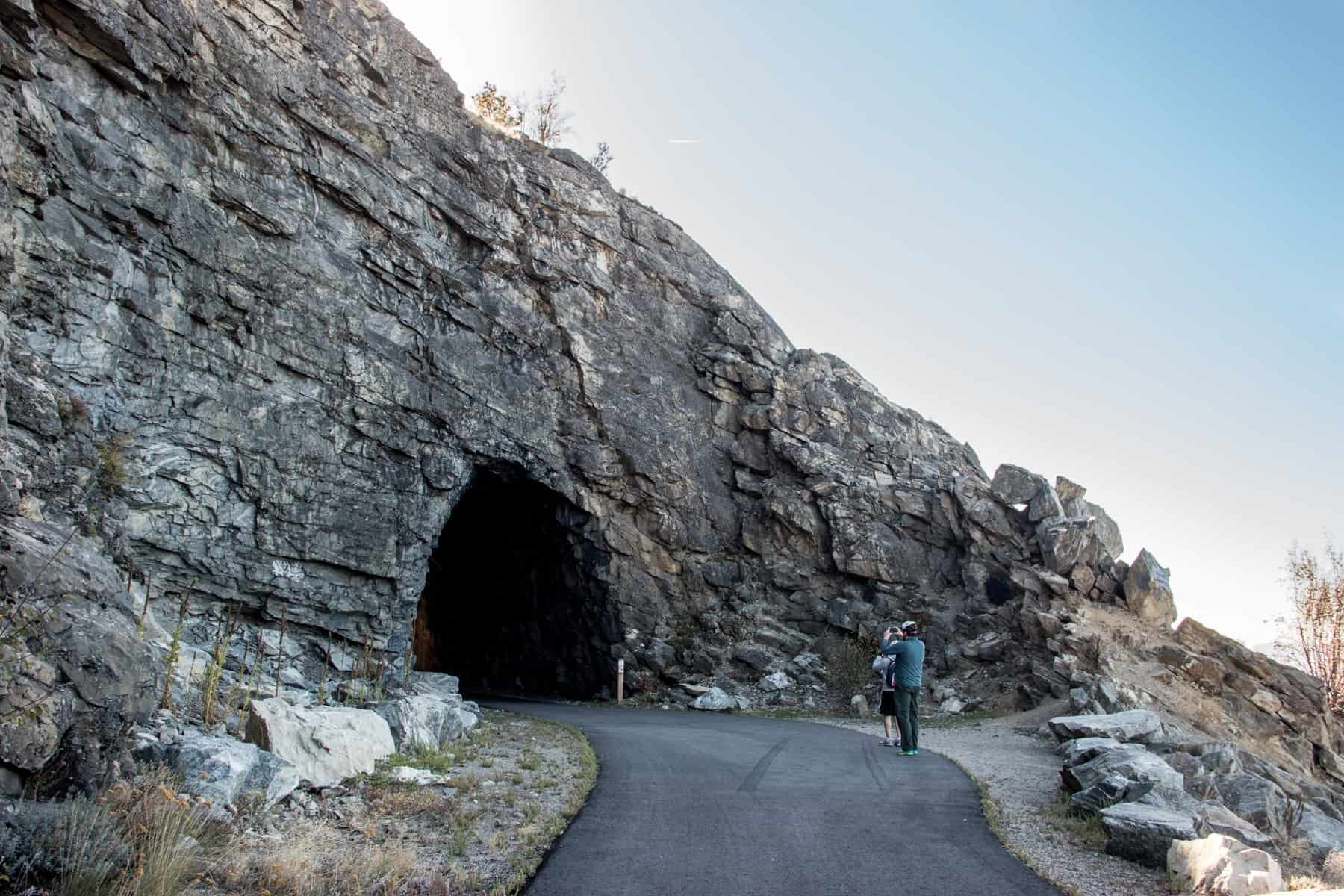 We began our journey on the Myra Canyon Trestles Trail at the Okanagan Mountain at the mighty Myra Canyon Trailhead, whose densely carved-out tunnel marked the start of this historical journey. 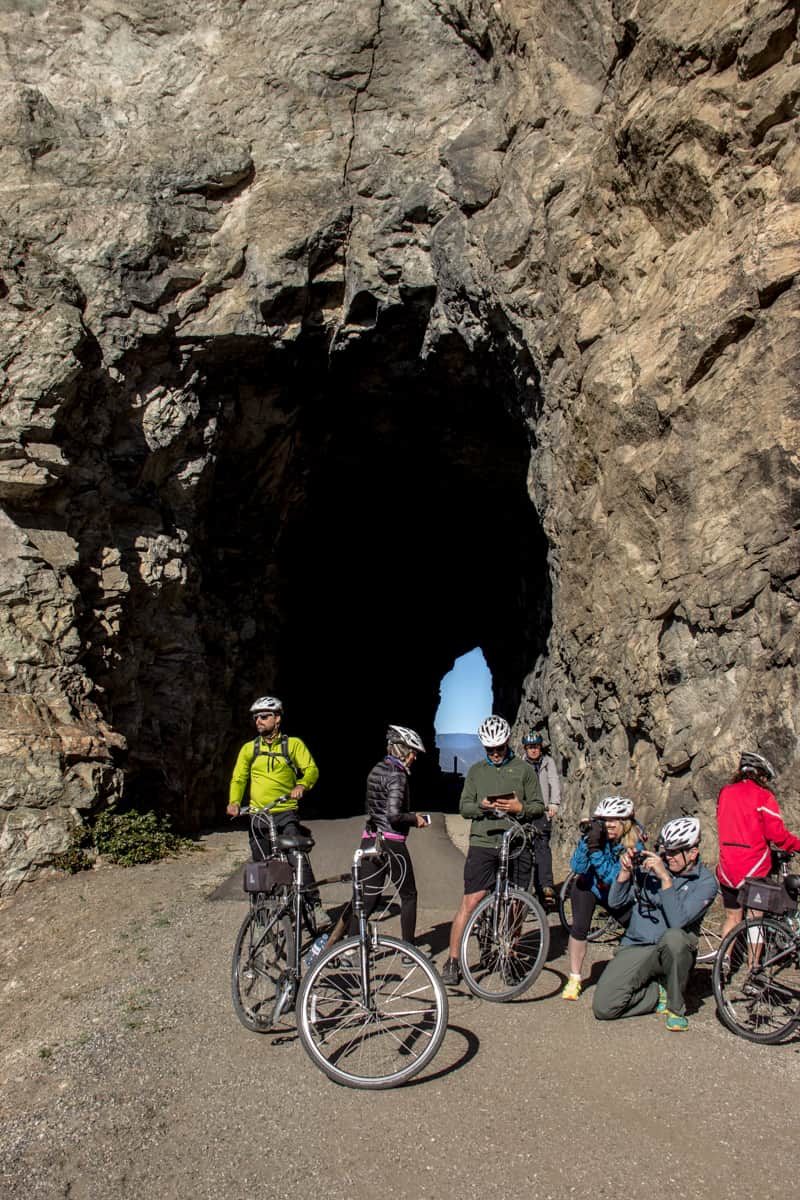 In Penticton, British Columbia, you can cycle on dirt paths that were once the tracks of the abandoned Kettle Valley Railway Trail, also known as the KVR Trail.

The area became accessible for more than just past train passengers, yet disrepair called for restoration regarding the safety of those using the route for recreation purposes. So, the government of British Columbia purchased the Kettle Valley Railway corridor, bringing its bridges and trestles back to life. 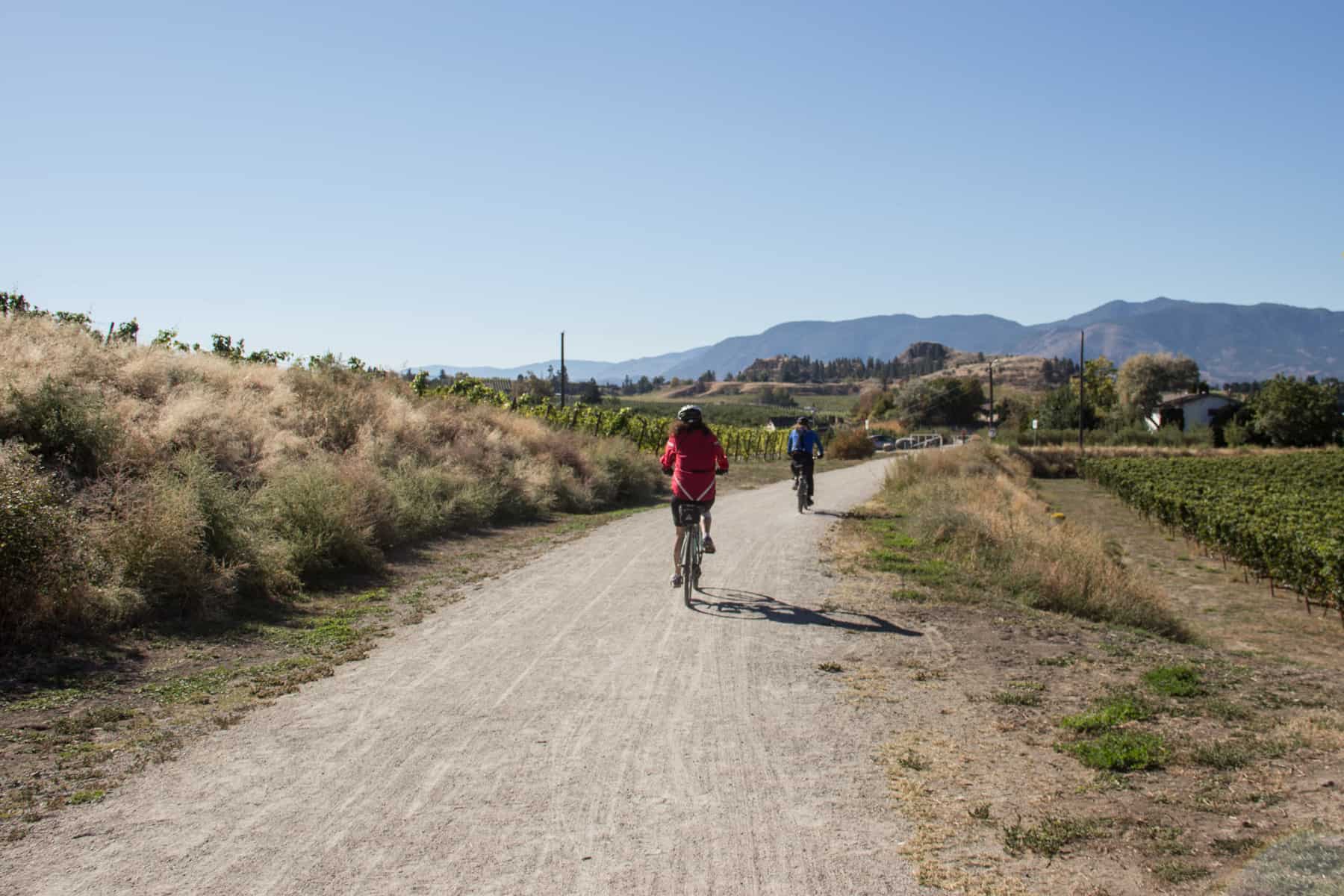 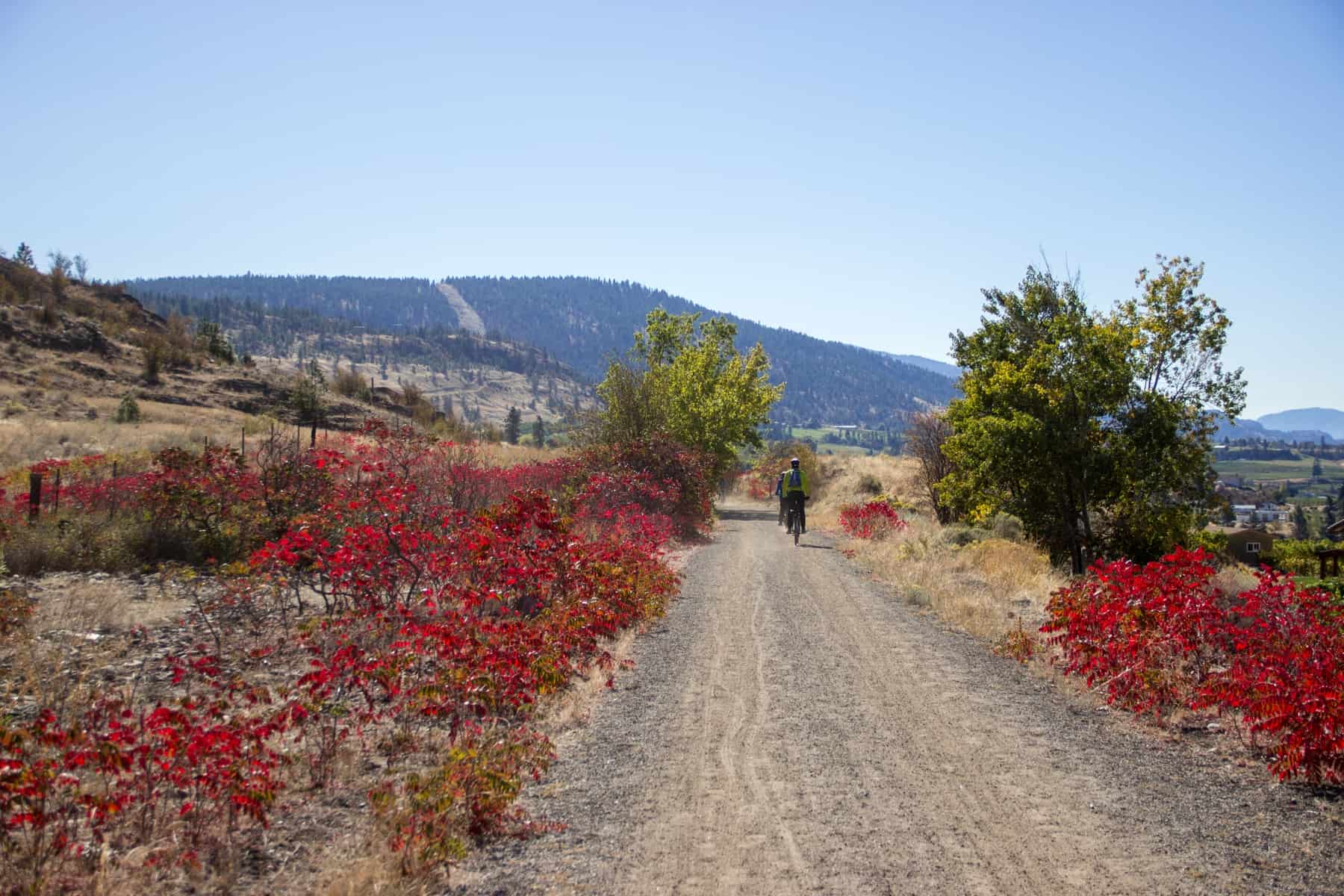 This short, scenic cycle was only a glimpse into the fascinating history of the railway in Canada. The 600km route this railway once spanned awaits the more adventurous looking to travel the Kettle Valley Railway’s entire journey. 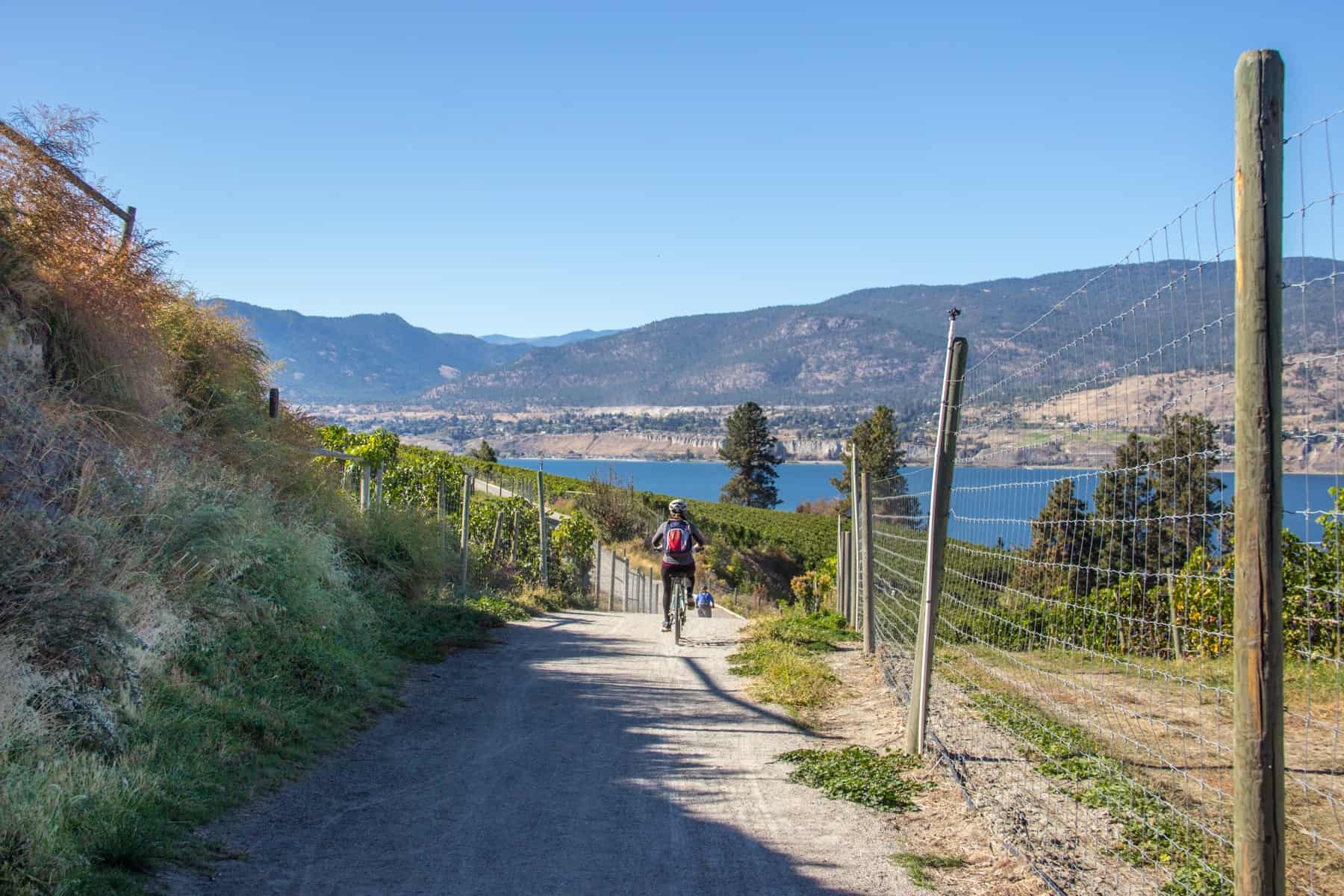 The Kettle Valley Trail covers 600km, but you can sample around 20km on the Myra Canyon Trestles Trail. 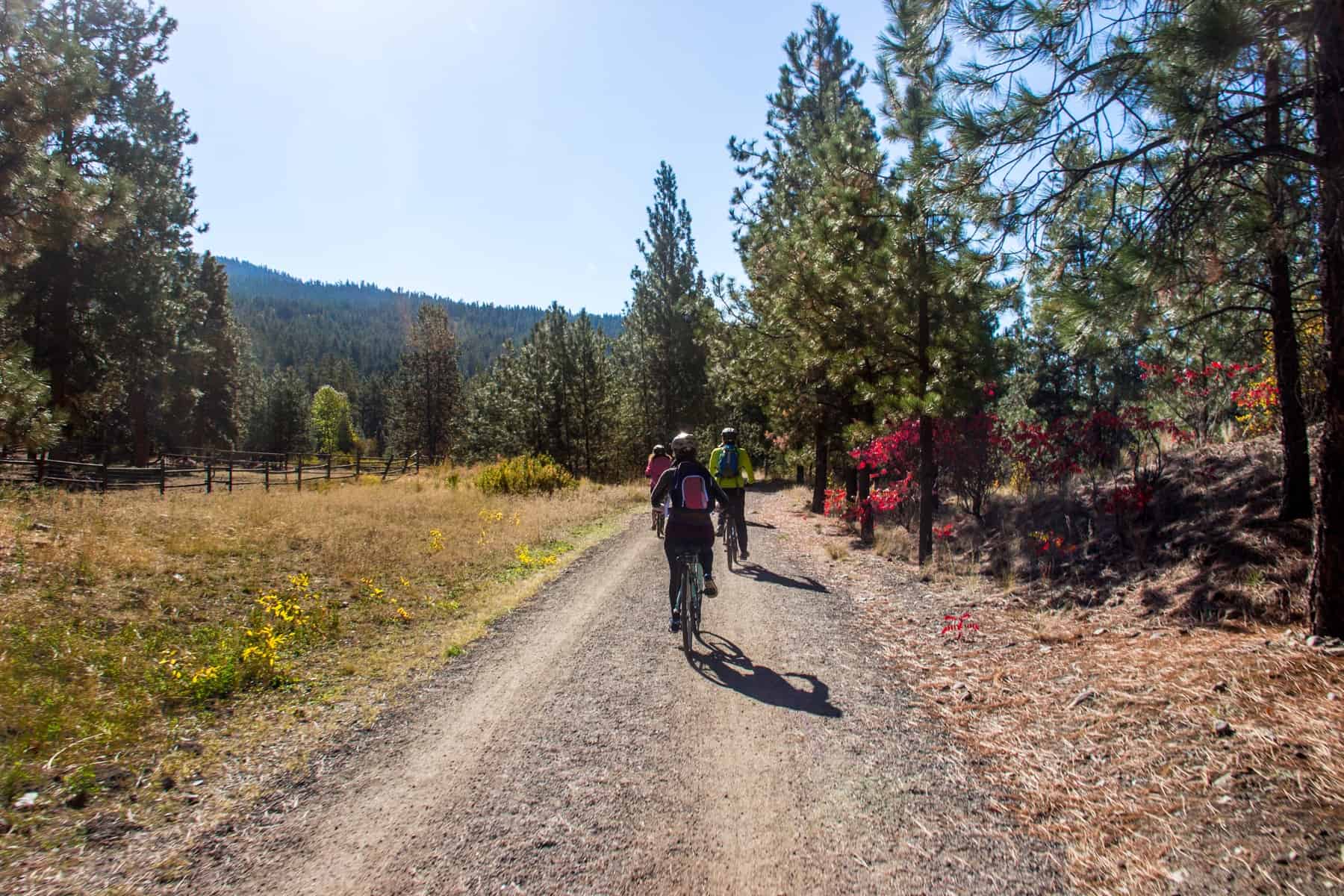 Changes in landscape on biking the Kettle Valley Railway route.
We then sped through this window to another time, where gravel pathways and gentle bends marked the route preserving this town’s important heritage. Picture stops are compulsive as you wind through woodland and pretty panoramic views of Penticton. 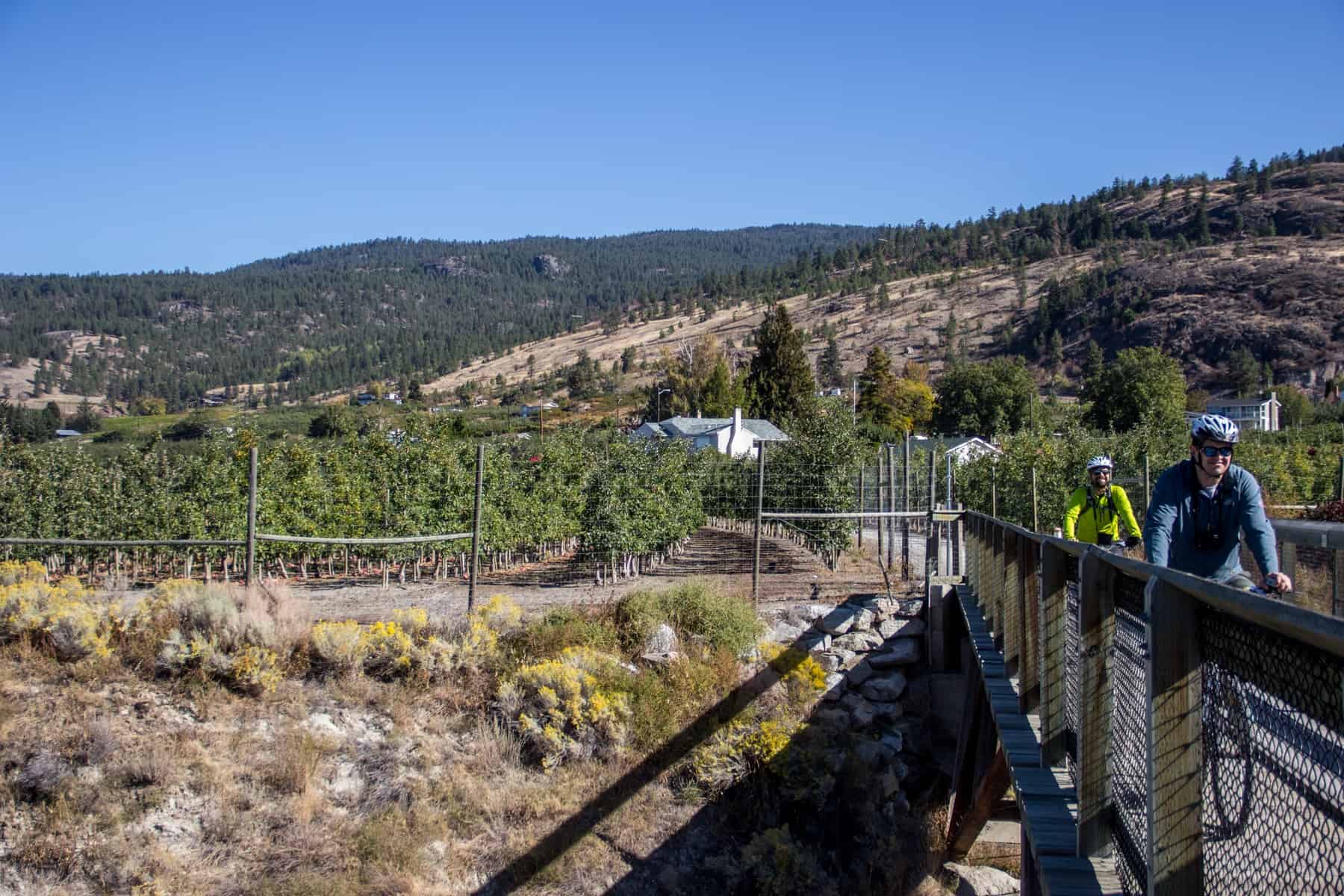 A small section of the Kettle Valley Railway remains. The preserved section of the heritage railway line is a 10-mile journey in Summerland, British Columbia.

It’s a shame quaint steam engines no longer trundle at such heights. Over time, a series of events eventually led to part-closures of the KVR between the 1950s to the 1980s. Like mine closures and decreases in freight loads from the mills, then changes in the forestry industry as trucks became the preferred method of transportation.
In restoring the historic railway route, bridges and trestles were mended and made safe for cyclists.

The blissful route of the KVR Trail.
Are you thinking of cycling part of the 600km tracks of the abandoned Kettle Valley Railway Trail between Kelowna and Penticton? Here’s how to bike back to 1915. Preserving this old rail bed not only brings people to Penticton aside from its wine country fame but also conserves a significant part of the region’s industrial heritage and contributes to the community.

Part of the easy-grade route of the Kettle Valley Bike Trail. 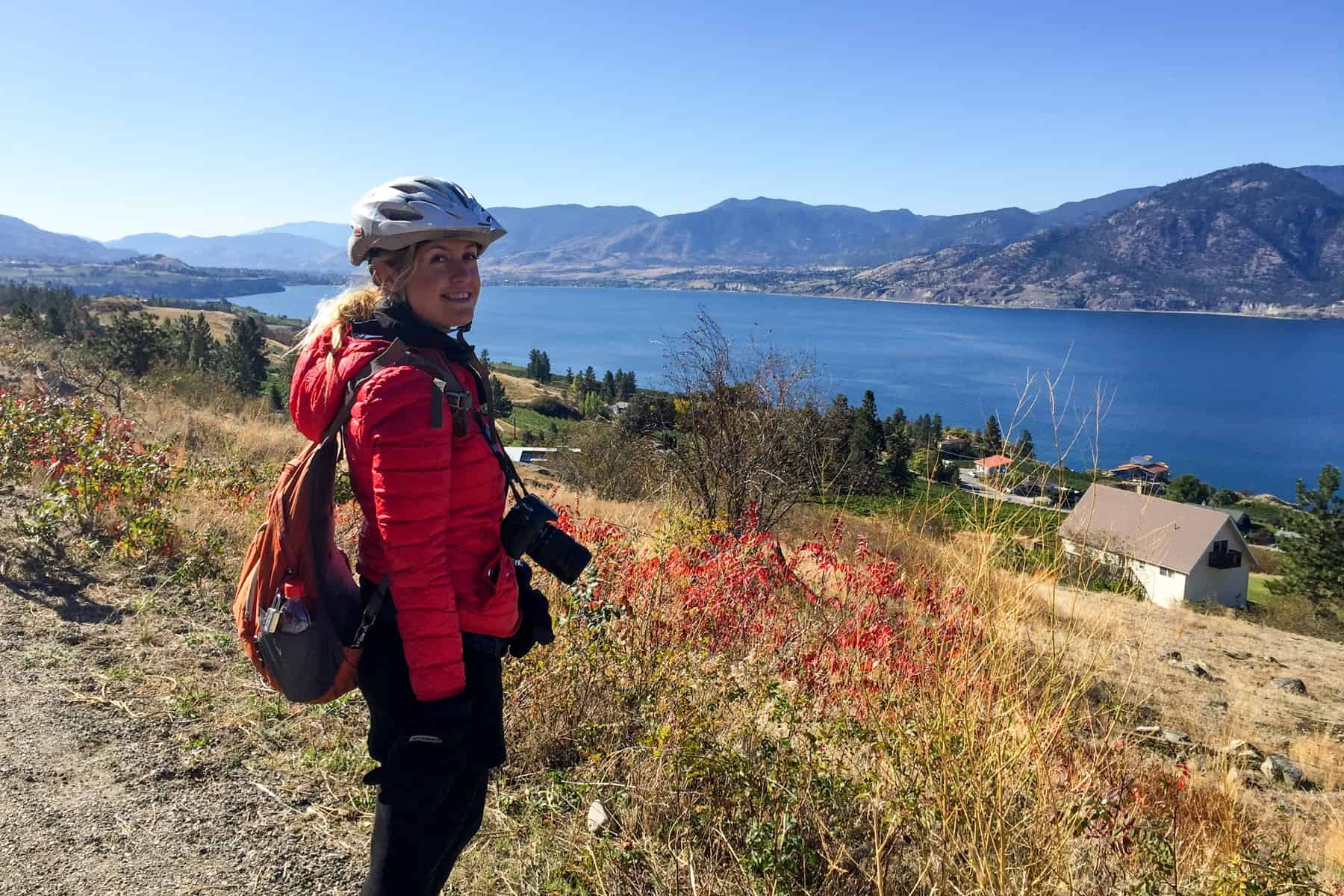 However, you can sample a stretch of the KVR trail in one day on the Myra Canyon Trestles Trail, that’s considered one of the most scenic portions. Covering around 20km along a steep canyon wall, it’s an easy grade route that crosses multiple trestles, tunnels and bridges with sweeping views that are, at times, precarious at great heights.

Now it is an abandoned site that gave rise to a nature trail accessible to all.
One hundred years ago, trains servicing a growing mining and milling industry ploughed through here on the same corridor I am riding.