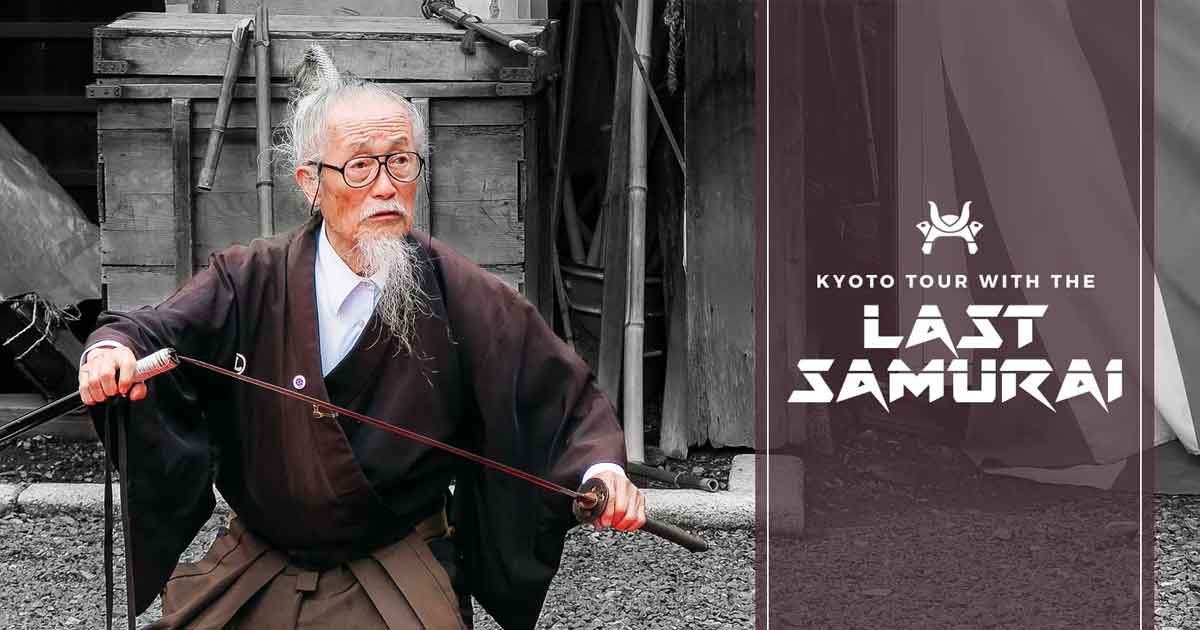 Since one of the byōbu had an illustration of a sakura (cherry blossom) tree, Joe even started to share facts and trivia about it.

As I walked closer to him, I made a mental note about how domineering he looked… but the moment that he took notice of me, Joe flashed a big and warm smile towards my way which quickly washed away my initial estimation! THIS will be a recurring theme when you’re with Joe because he wouldn’t hold back in sharing interesting information that is unique not only to Kyoto but to Japan as a whole! And since he’s like a fountain of information, a lot of us in the tour wouldn’t hold back either in asking questions.
The meeting place for Joe’s walking tour was at the Kyoto City Hall near Kyoto Shiyakusho-mae Station, and it wasn’t that hard to spot him in the crowd because he was wearing samurai clothing (that looked like a kimono) while holding his long sword. This didn’t seem obvious at first since it was wrapped in thick fabric, but a glimpse of the handle (tsuka) was a quick giveaway of what it was.
Once everyone was accounted for, Joe started to talk more about who he was, about his life during the war, and about Kyoto in general. He would also start to quip clever jokes here and there — sure, some were cheesy, but never too cheesy that it left all of us in smiles. From then on, I already had a really good feeling about Joe’s tour!
TIME: Every Saturday from 10AM to 3PM
WALKING LENGTH: Around 4km
TO RESERVE YOUR SPOT: Go to Tinggly.comPRICE:  for 2 people, includes lunch and snacks (FREE for children under 12) We exchanged greetings and confirmed my booking for his tour, and it was at this point that I made a second mental note about how he spoke English very well — a rather rare trait among the Japanese people (more so for the older people).
• • •
Our first stop that day was to an art exhibition in Teramachi Street called Yokaan. Joe told us that the displays here change from time to time, and what was being shown during our visit were byōbu or Japanese folding screens with decorative paintings that are typically used to separate sections inside rooms.
– – –