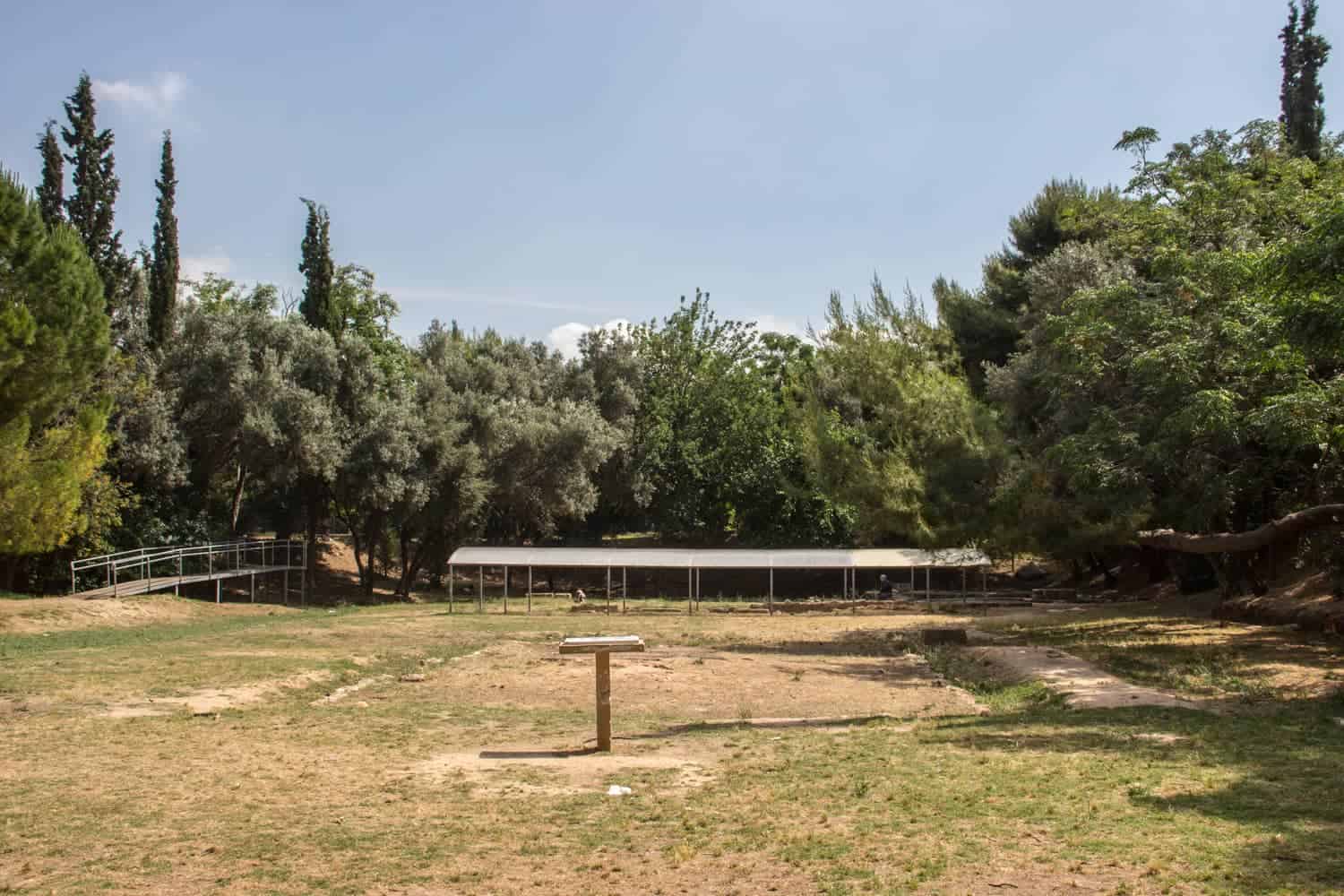 Join urban artists from the city who will give detailed insight into the street art scene, emerging in the early 1990s as a social-political voice – a sentiment that continues today. You can learn about the designs, techniques and messages found mainly within the central Exarchia, Monastiraki and Psirri neighbourhoods with Manolis (aka “rtmone”) and in the lesser-known and grittier Gazi and Metataxourgio neighbourhoods with Achilles from Alternative Athens. Each has their own distinct style and personal highlights to share.
In the eastern reaches of the city, outside of the central confines, is a park known as Plato’s Academy. If you stumbled across it, it would look like nothing more than a slightly abandoned space with a scattering of ruins. Yet this was an important space from the 4th Century – a time of power, intellectual growth, and literary and philosophical activity.
This is most apparent in the varied architecture of the city that showcases the history of occupation and re-build. 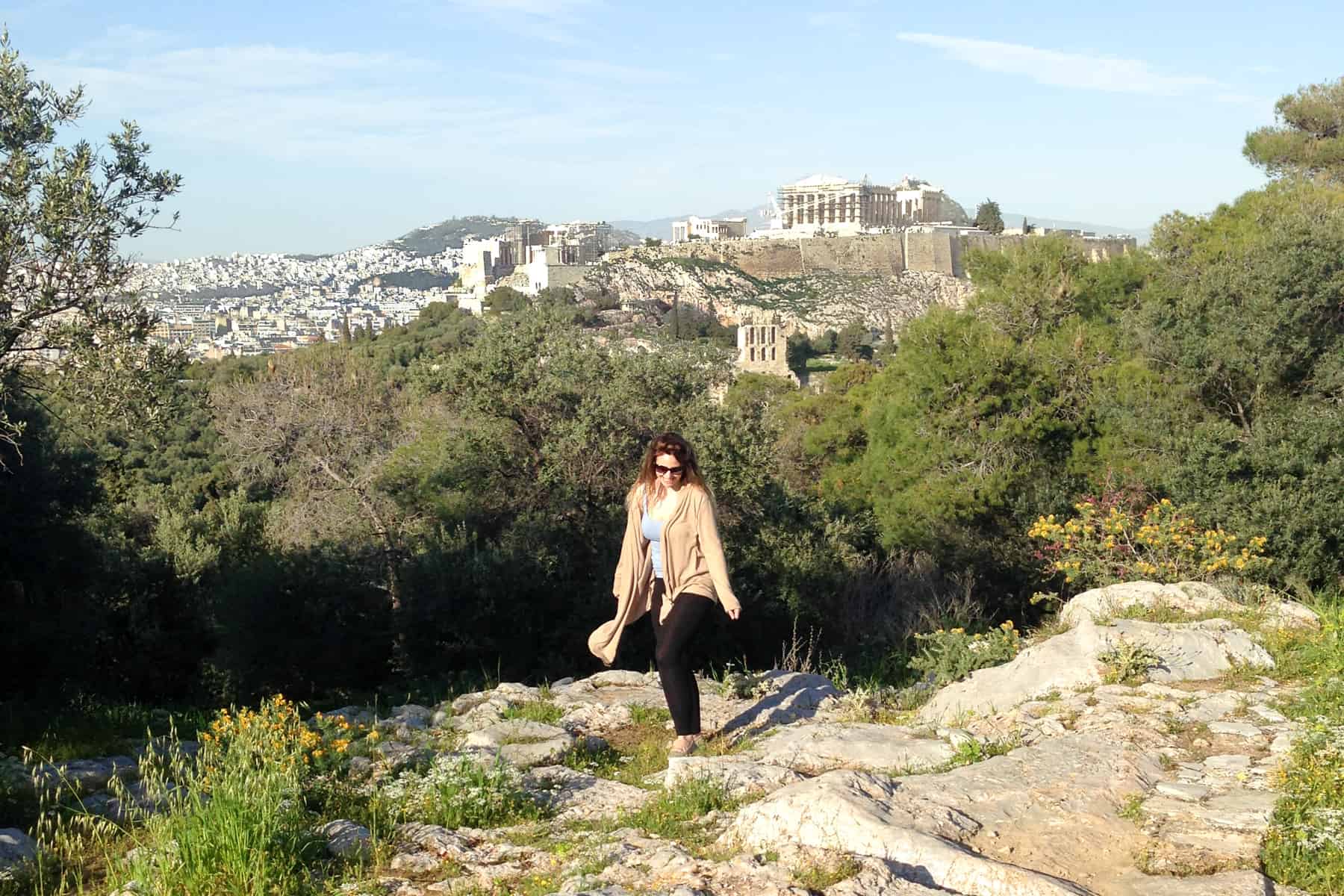 The gritty streetscape of Athens may dominate the scattering of golden classical sites, but its history is rich, its neighbourhoods varied, and its soul thriving in both tradition and a unique modern-day cultural regeneration.

Disclaimer: This post contains affiliate links to handpicked partners, including tours, gear and booking sites. If you click through or buy something via one of them, I may receive a small commission. This is at no extra cost to you and allows this site to keep running.
Deep discussions on the Philosophy Athen’s walking tour
Your architectural journey, in the company of scholar Vasillis from Context Travel, starts in 1935 at Syntagma Square and jumps back and forth through the ages as you walk through the Omonia, Monastiraki and Plaka areas. 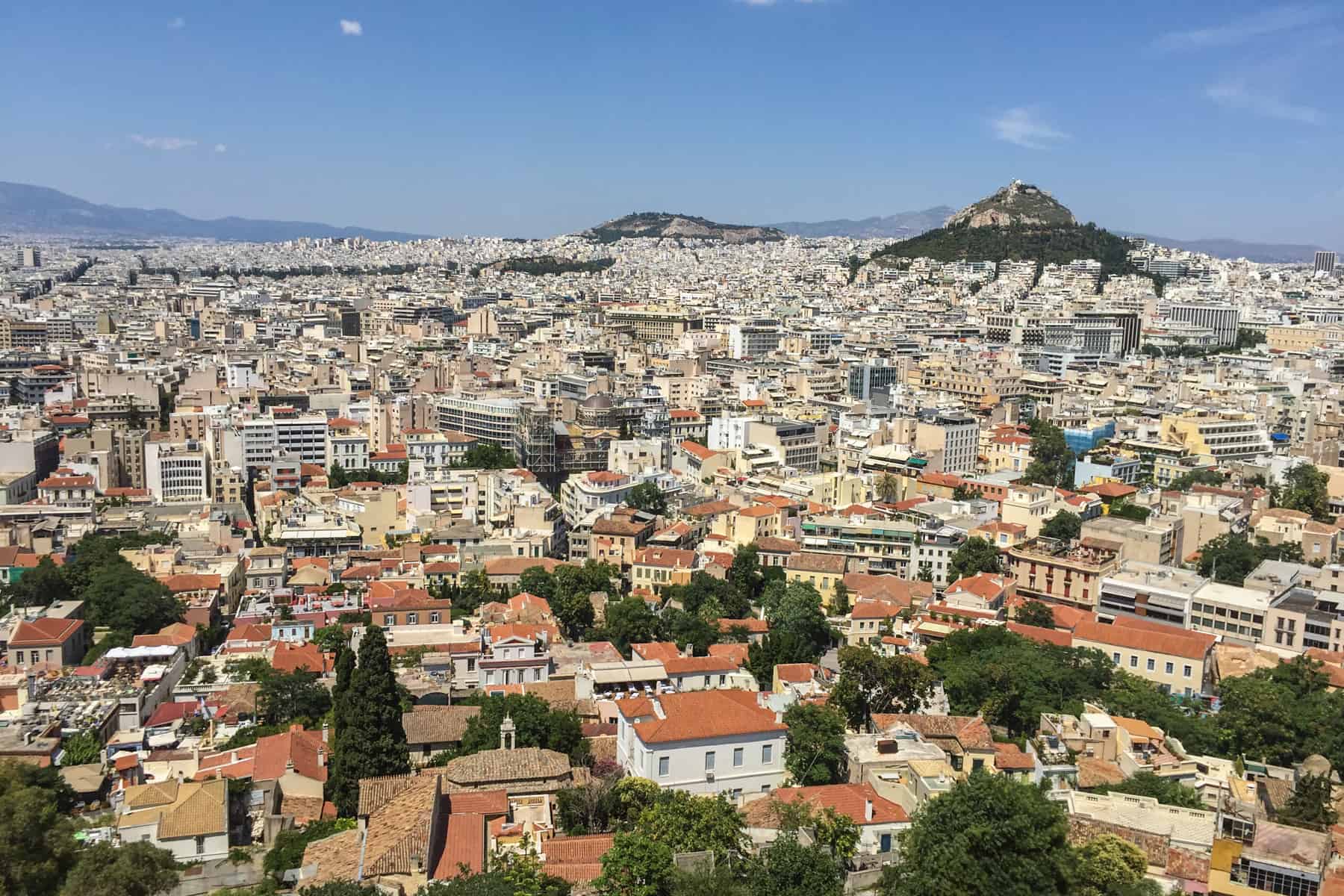 While Greece isn’t known for its wine, the scene in Athens has grown over the past two years, in an attempt to highlight homegrown varieties to international wine lovers. During the Ottoman rule in Greece, wine production was halted and vineyards became neglected, while France and Italy’s production soared. Over the years, small vineyards emerged, with every village touting a different grape variety – a much wider choice, but less concentration on mass production and export.
A modern neighbourhood stands alongside the ancient Plato’s Academy
I was a guest of all the walking tour companies listed, and I took the walks over a period of three months during one summer. All opinions on this Athens walks blog remain my own.
Despite being a free programme guided with passion, be sure to tip your guide – they will appreciate it. 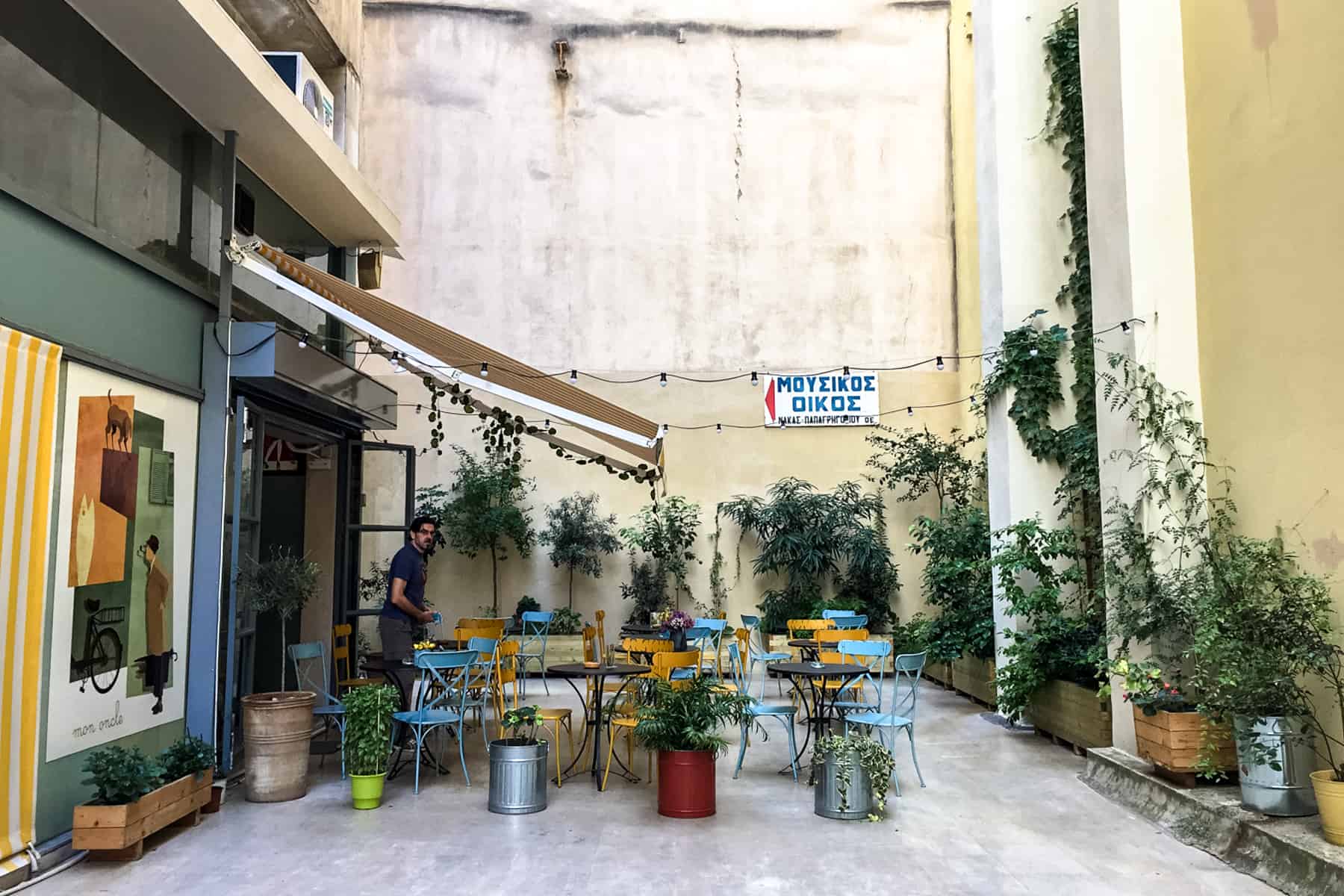 From the sauvignon-like Nemea, the pinot noir-like Naoussa and fruity moschofileros, to the wild fermented assirtikos and the distinct flavours of Santorini and Crete, the real test is if you can pronounce the names of them all at the very end.

If you don’t know your Nemea from your Nauossa (two of Greece’s main wine-producing regions) or that Santorini’s volcanic soil is known as the best terroir in the country, then it’s time to brush up on your Hellenic vino knowledge and get to grips with the unknown Greek wine scene.
It is possible to take in the highlights of Athens sightseeing in just a few short hours with an Athenian who will guide you through the ancient and ottoman parts of the city and walk the neo-classical ‘triangle’ from Syntagma to Omonia to Kerameikos. 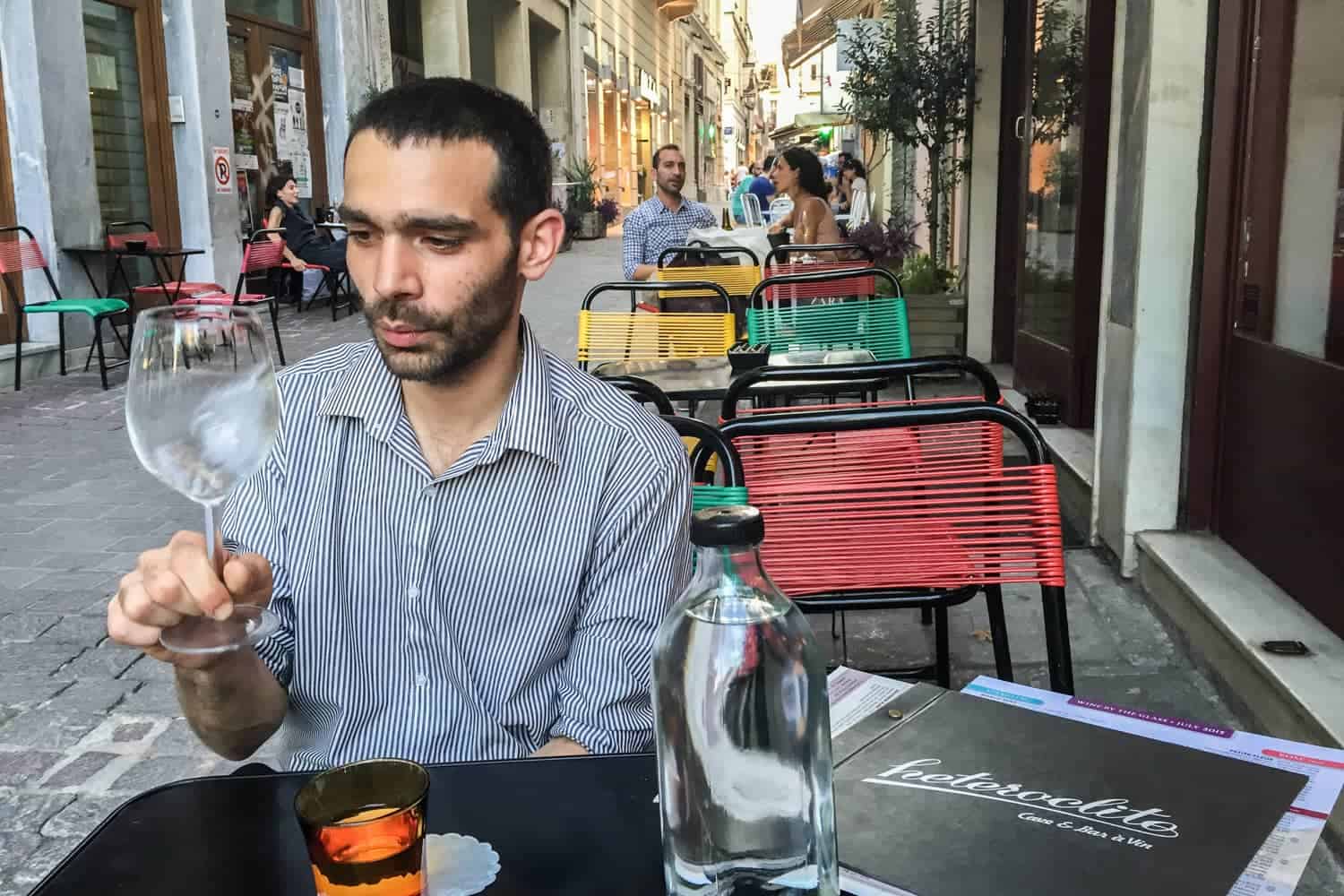 The things to do in Athens go far beyond its Acropolis fame; a city that is easy to walk around and big on experiences. One of the best ways to understand these complex layers is to engage in the variety of themed Athens walking tours, in the company of locals who can take you through this diverse metropolis and show you a very different side.
Some of the treats from the traditional Greek food walking tour in Athens

While unsightly tagging is common, some of the ultra-creative pieces on show here will catch your eye on every corner. Shop shutter covers and buildings whose entire façade is covered; abandoned spaces and hidden finds – each artwork has its own story, sometimes about the particular building or area itself.
The morning starts with coffee and sweet treats at one of the oldest dairy shops in Greece, once based at the port but relocated to the city centre after being bombed during the war, before learning about the production of feta at a family-run cheese shop that’s been around since 1916. 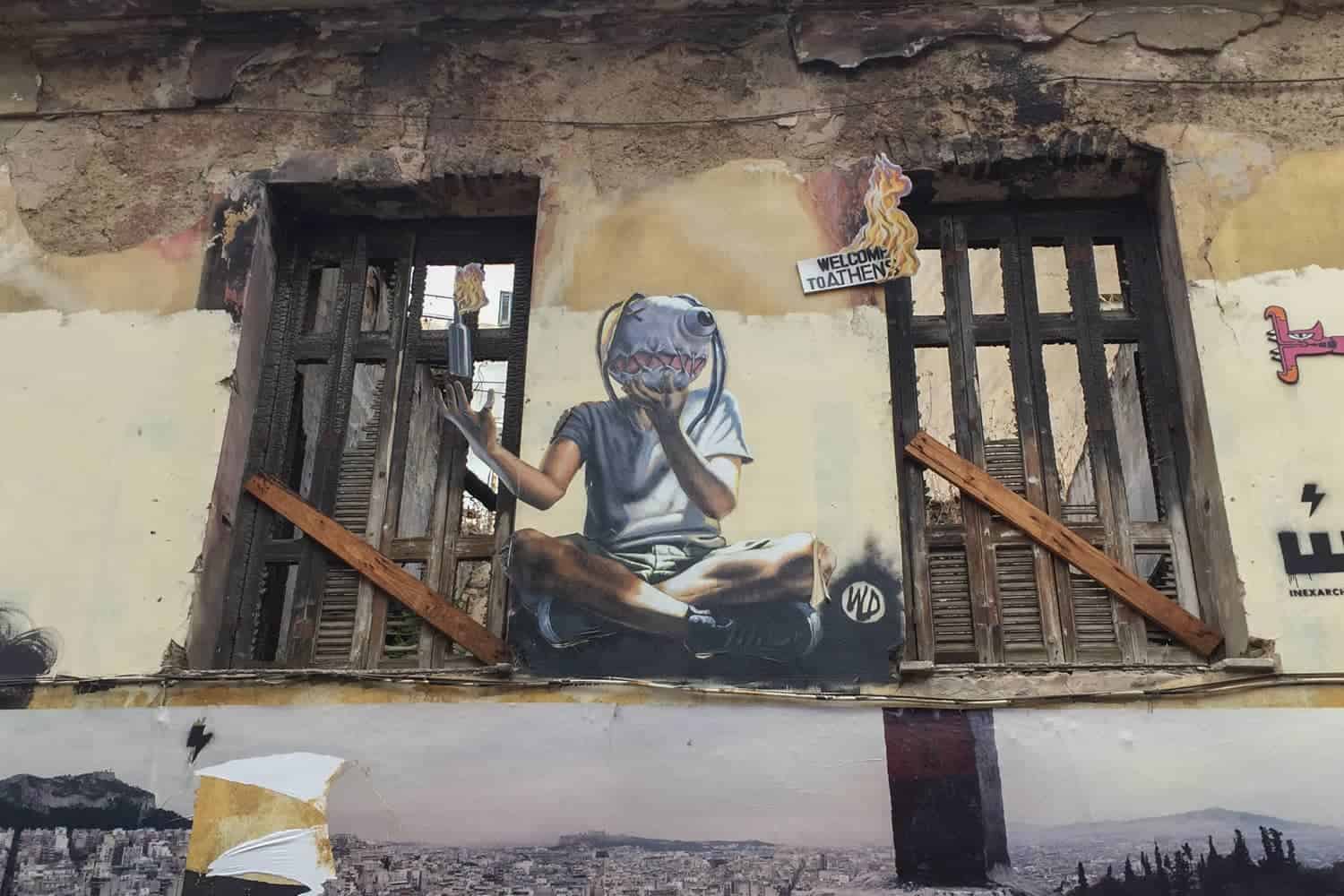 The delicious samples on the Athens wine tasting tour 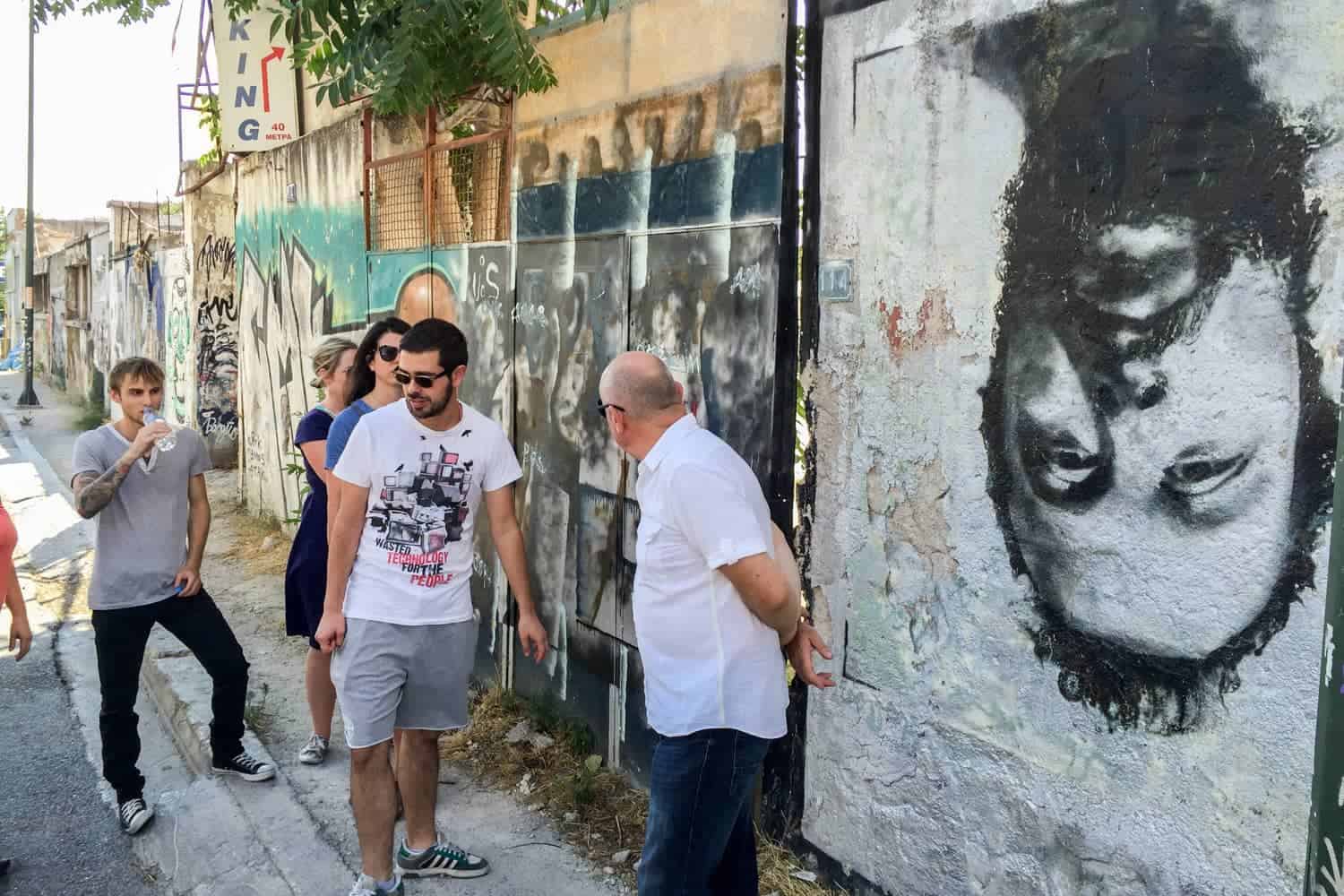 Taking a walking tour in Athens is a great way to navigate the city’s history, culture and hidden spots.

The best street art Athens tour takes you to the most famous and long-lasting murals
With Culinary Backstreets, you go beyond the taverna and explore the tasty secrets of downtown Athens. Think northern Greece style Souvlaki, moussaka, Greek salads, generations-old recipes of feta cheese, yoghurt and honey served in old dairy bars, olives fresh from the market, Armenian cold cuts, Cretan cuisine and sweet treats like the loukoumades Greek doughnuts.

So you shouldn’t leave Greece without trying its best selection on home soil. Sommelier Yiannis from Athens Insiders takes you to three of the most well-established wine bars in central Athens. You’ll not only learn basic tasting techniques, but you’ll also be able to pick out regional attributes and Greece’s very distinct blends as you savour some of the finest by the glass.
The Ancient city of Athens easily seen on a walking tour through the ages
You’ll soon notice the triangular pediments and classical column designs of the neo-classical era, learn why Plaka’s buildings are dotted with beautiful balconies, see the oldest standing preserved Ottoman building, find one of the only art-nouveau buildings in the city, and pass through Athens’ secret island-like village. 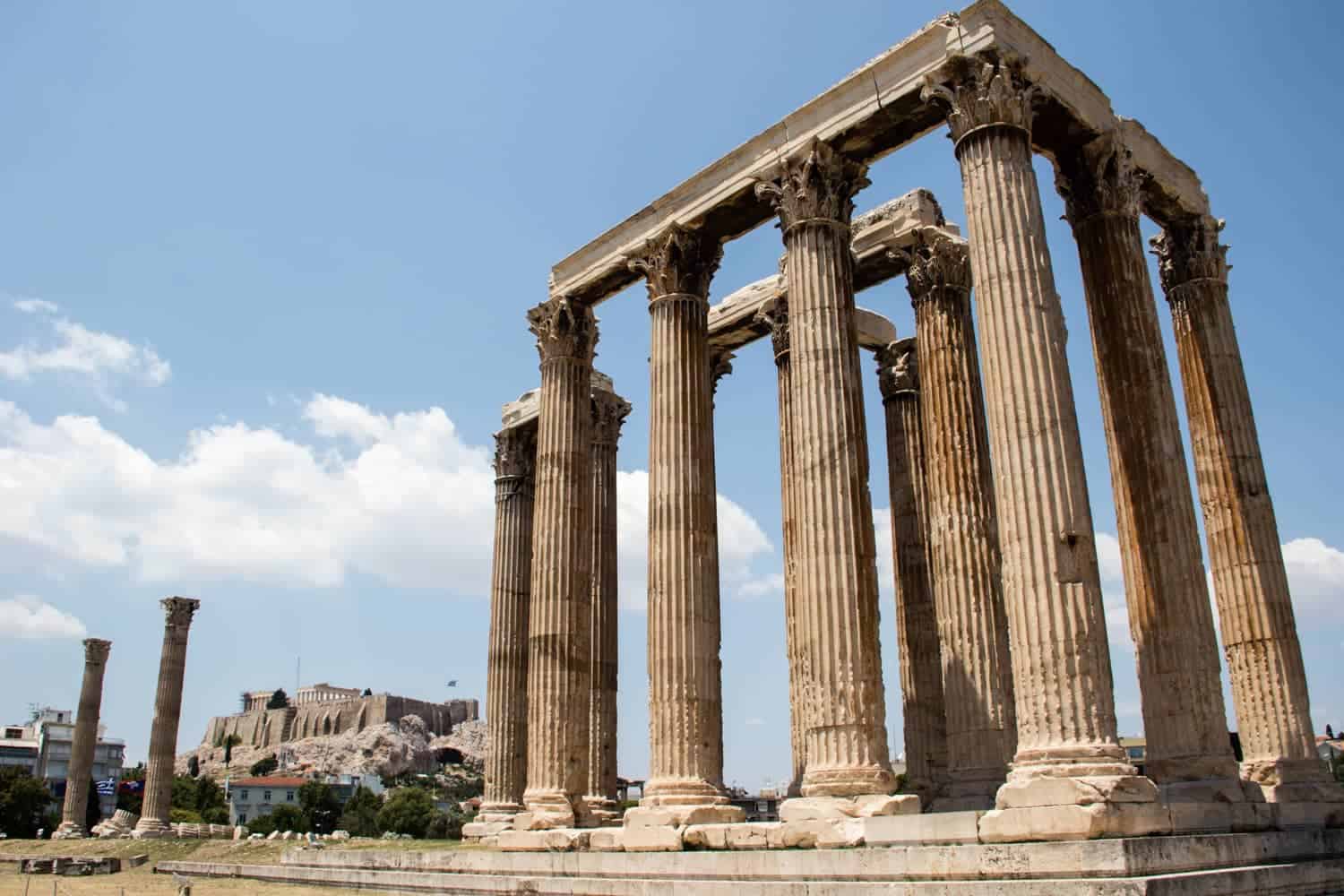 Connect with a local guide and experience life through their eyes on one of many Athens walking tours. It really is the best way to break through the misconceptions surrounding the identity of the city, dig deeper into its past, understand its present-day persona and indulge in the unique culture that thrives here in this bustling Greek capital. 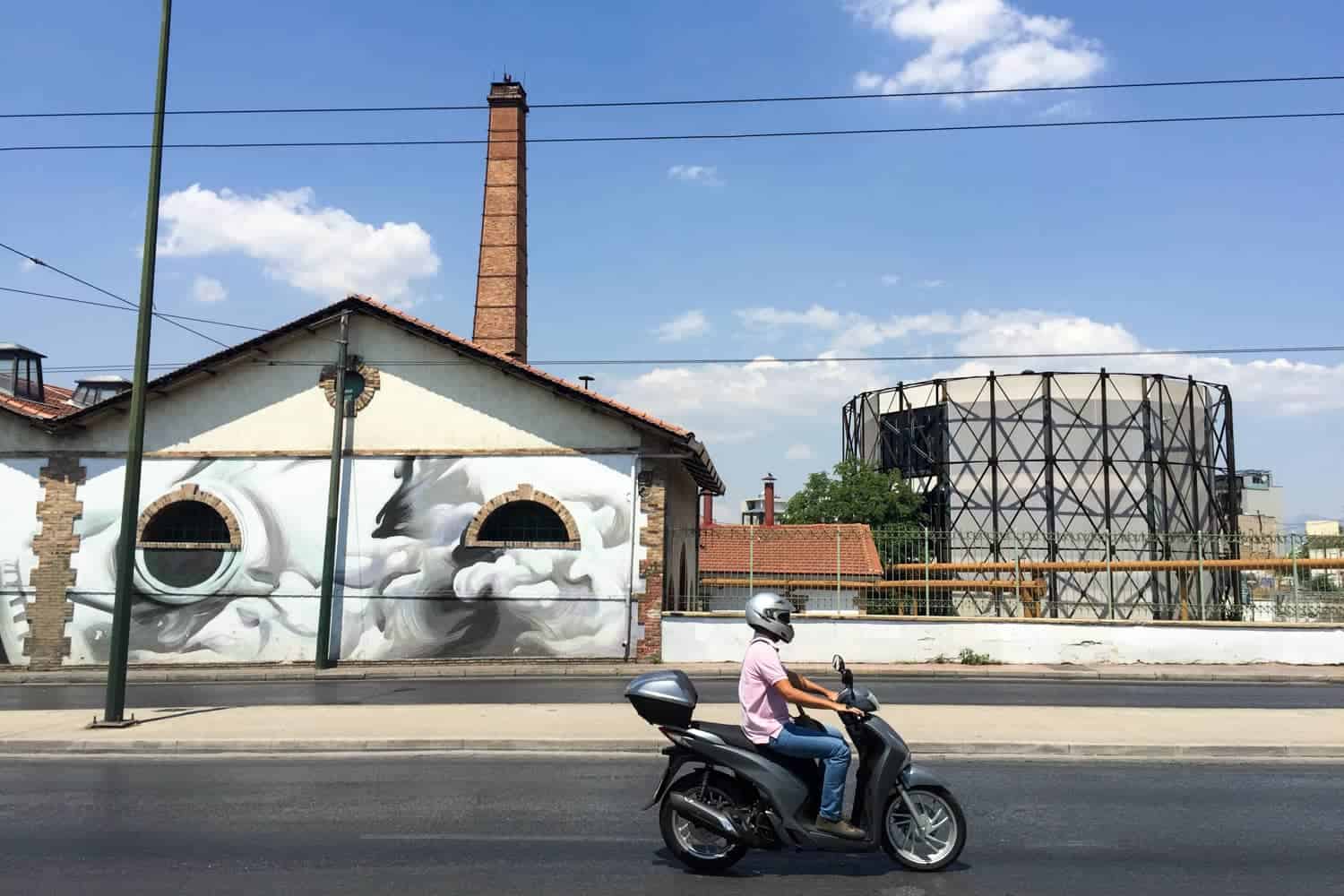 The old industrial area of Athens

READ MORE: Athens Like a Local – The Real City Behind the Headlines
The Best Athens Walking Tours With Locals – See the City Differently.

While the Renaissance was happening elsewhere in Europe, the Ottoman Turks didn’t follow. In the 19th century, countries including Germany, France, and Britain injected classicism into the city as a way of bringing back the ancient Greek identity. With Greece besieged by seven wars over the centuries, Athens in particular always lagged very far behind in its engineered beauty.
Then it’s time to sample cold cuts from the Armenian restaurants and stores (many Armenians came to Greece during the tragic genocide) and indulge in one of the city’s best souvlaki at a third-generation family-run stand, established in 1950 and currently run by the original owner’s grandson.
And if that wasn’t enough, you also get to sample olives and meats at the frantic but fun on the senses, fish-market and sweet honey and cinnamon laden loukoumades doughnuts at one of the oldest local favourites in town.
To not sample traditional Greek eats is quite possibly one of the biggest sacrilegious acts of travel here. Even the least discerning of food aficionados will learn to love the Greek cuisine, based on the most simple and fresh of ingredients. Especially when you are in the hands of the passionate local guide, Carolina.
Find Athens’ hidden corners with a local in the know.
The ‘This is My Athens’ free greeter programme means being able to hang out with a local who matches your interests or organising a walk tailored to what you really want to see. 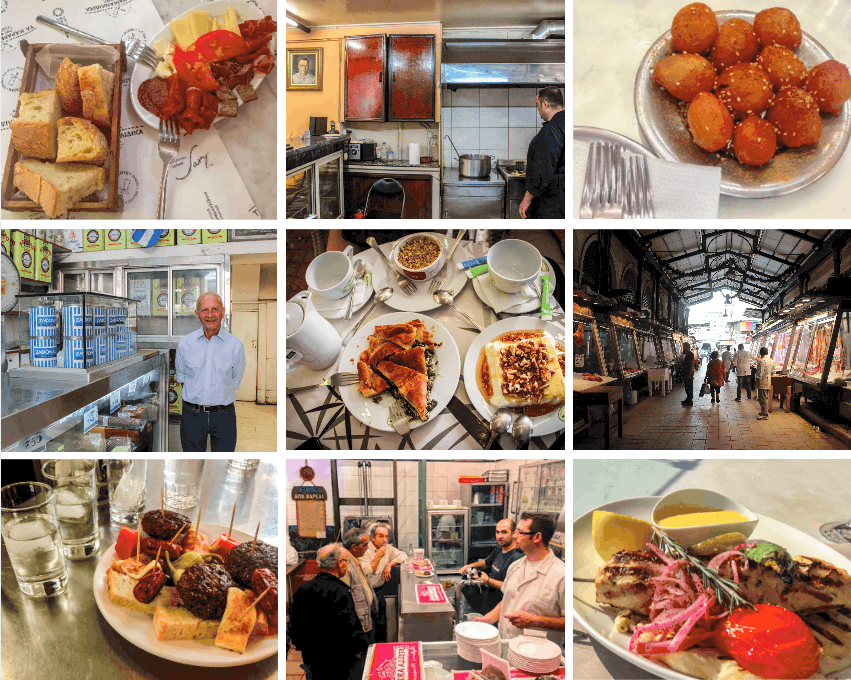 The birthplace of democracy and a city that changed with Roman and Ottoman occupation, to the more modern wave of Neo-Classicism and the practical yet non-descript re-build of the 1960s, Athens has been destroyed, conquered and rebuilt many times over.

Athens Philosophy Walking Tour: On the Trail of Plato 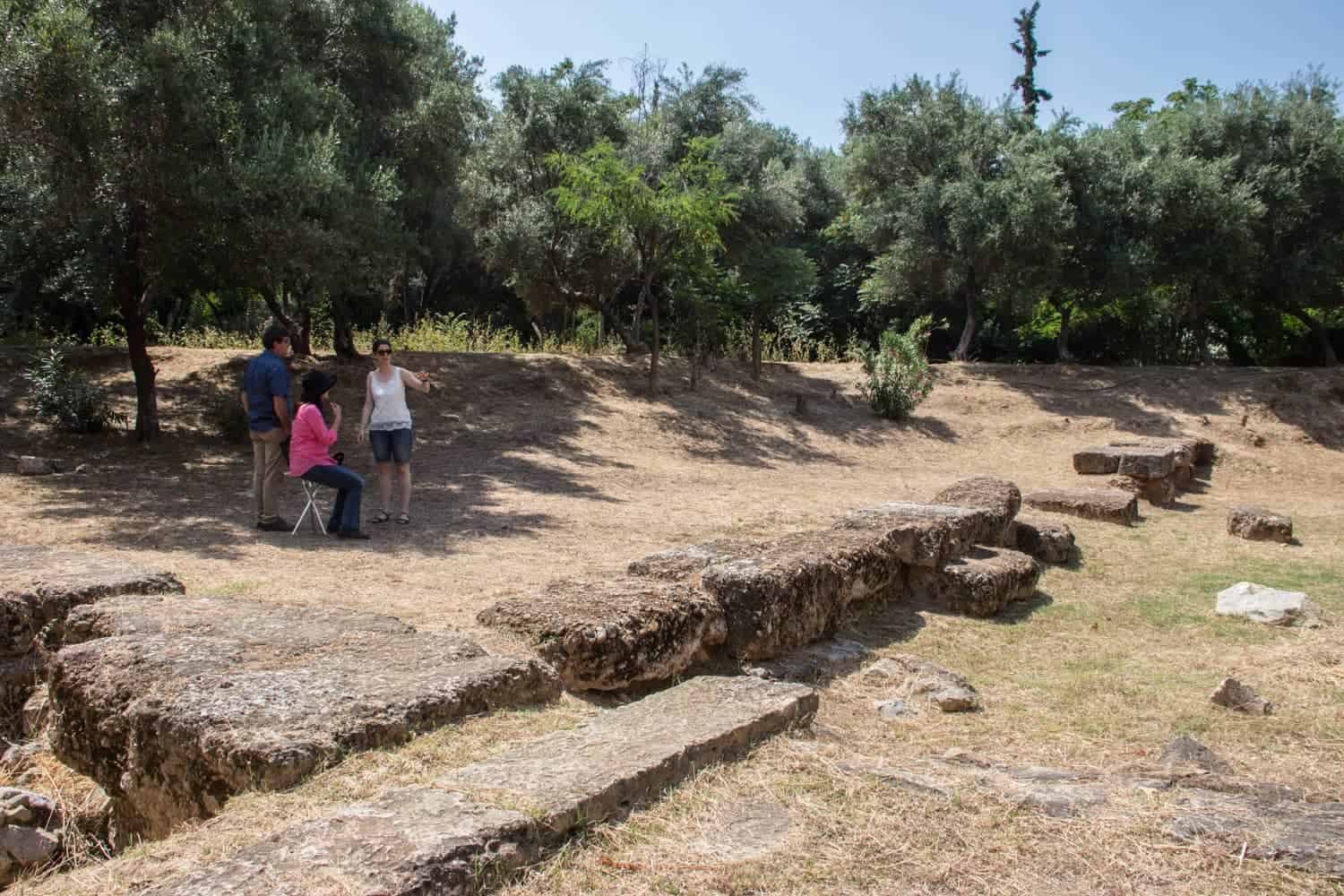 Read on for a selection of the best Athens walking tours with local guides, who will show you a different side to the city, covering food, philosophy, wine and history. 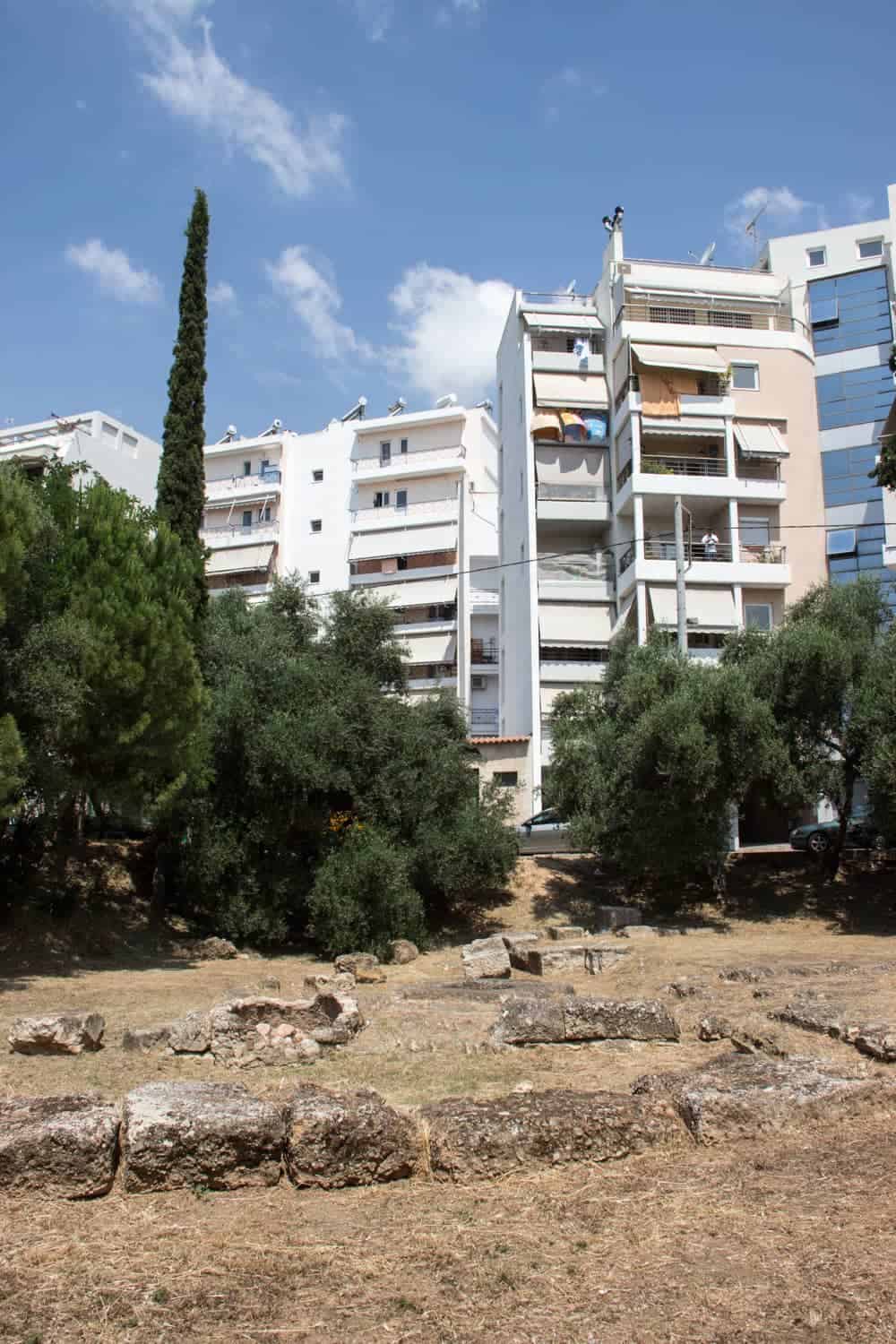 This tour is a full day of food tasting in the city, which combines history, sightseeing, and a very full stomach, as you hop between third-generation food stores, restaurants offering traditional foods, and places only locals know. Skip breakfast, you will need the space.

The ‘Socrates, Plato and the Pursuit of happiness’ walk will bring to life the history behind this simple patch of land where Plato lived and worked. Wander the ruins of the gymnasium where it is said Plato met the young men he would later educate, and stand within the school (Academy) he founded (albeit with Byzantine additions). This is a scenic and thoughtful walk through the importance of Plato’s teaching in early Greek civilisation and where his ideas of temperance, wisdom, virtue, and piety were practised.

City Walks in Athens – Are They Worth It?

Looking to dig deeper into the political expressions of Greece? Street Art has become the modern voice of creative Athens – a city that is said to have the largest collection of street art in the world.
Or, you can be sporadic and let the locals show you their favourite places in the city, including local hangouts and quirky sites you might not find in a guidebook. An excellent way to uncover Athens with extra time to source spots outside of the highlights.
READ MORE ABOUT ATHENS: How to Travel to Athens – Travel Guide for Greece’s Capital