Skip to content
A city surrounded by the sea, Athens is the gateway to the surrounding Greek islands, with hundreds of people leaving on ferries from the Southern Piraeus port daily. Little do people know that starting at that port, just 25 minutes away from the heart of the city is one of the capital’s best-kept secrets – a 40 mile stretch of scenic coastline along the Saronic Gulf called the Athens Riviera.

Which is great for those with limited time or on a long weekend city break.
If you hire a boat to sail the Athenian Riviera then you will be given instruction for what marina to meet at – there are many along the coastline although most will begin trips at the Piraeus end. I found myself at the Mikrolimano Marina in Piraeus – a short taxi drive from the Faliro metro, which is one stop before Piraeus at the end of Line 1.
By hiring a skipper, not only will you benefit from the experience of being within the haven of a lesser-known spot of the city, but also you’ll be aiding the local economy and helping the sailing community in tourism thrive. 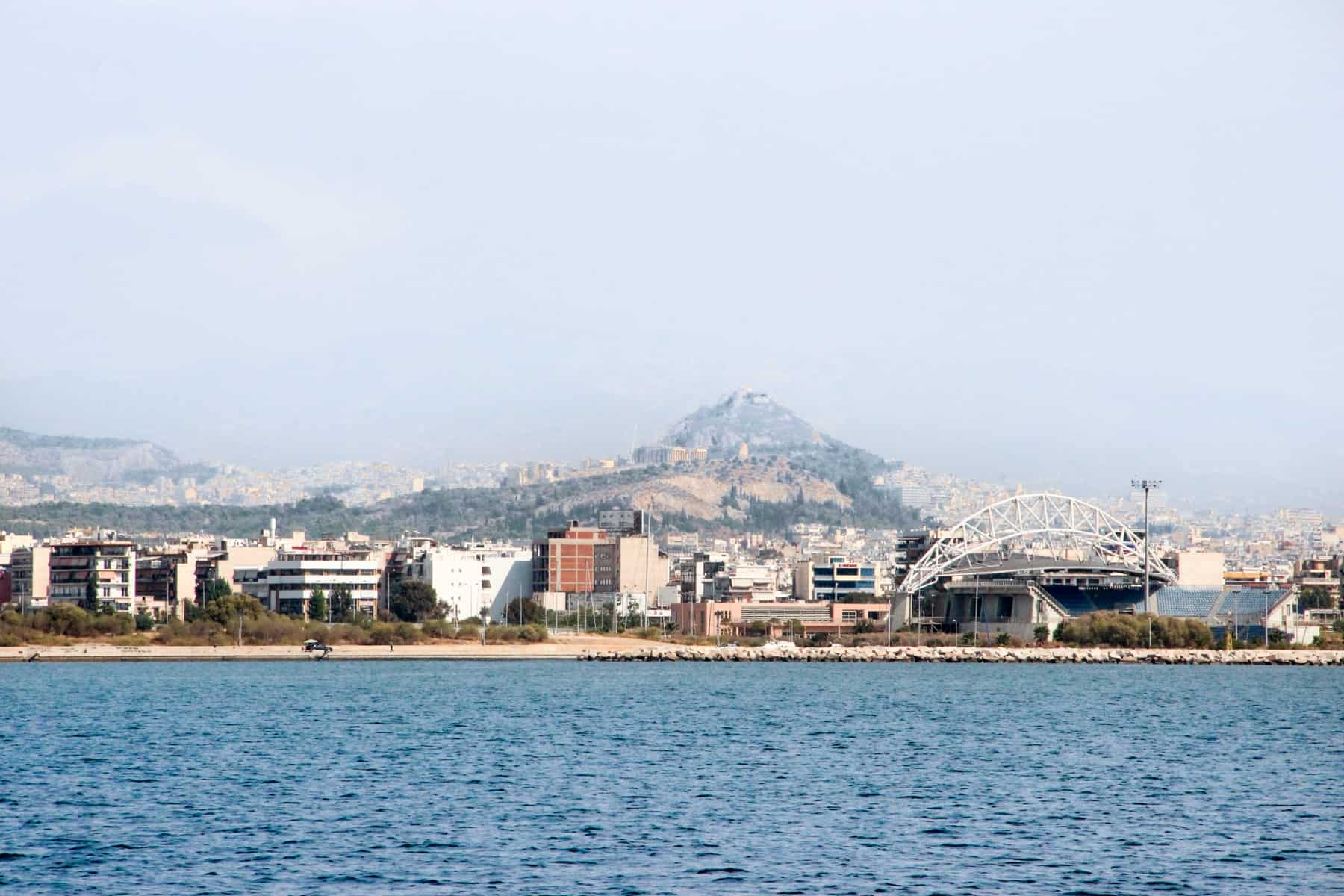 While on the area that makes up the Athenian Riviera, you are still firmly in Athens – just the greater expanse of it. 10km south of the Akropolis to be exact. This means the marinas, seaside towns and Athenian beaches are more accessible than you think.

Where Is the Athens Riviera?

If you are searching for a slice of island living, with sea view restaurants and bars and the chance to dip your toes in the sand, then the coastline suburbs are a wonderful addition to Athens’ more urban neighbourhoods. 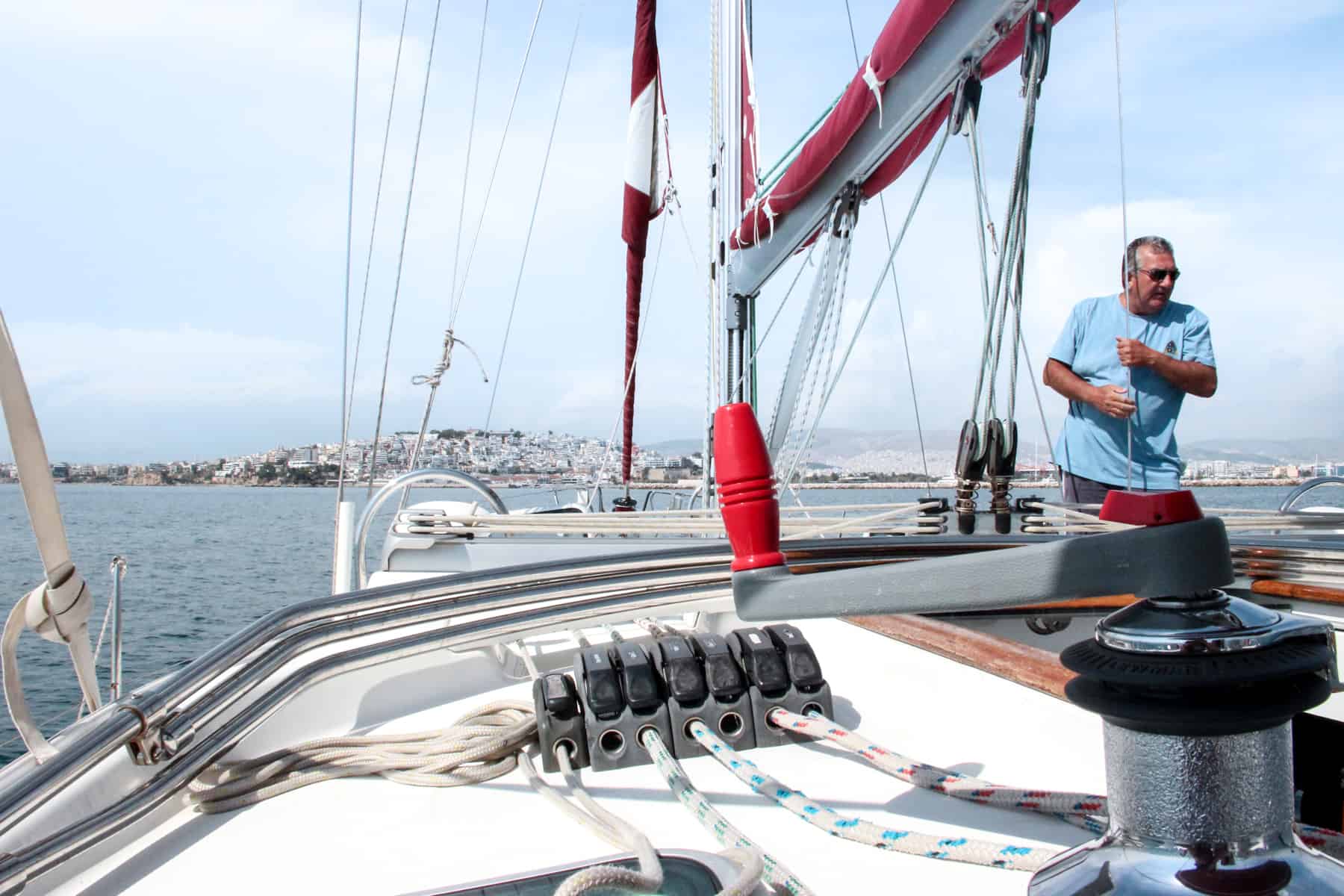 If you are looking for something closer to the city instead of sailing to the Saronic Islands (including Hydra, Poros and Spetses) then the Athens Riviera is the easiest way to access and enjoy the Saronic coastline for a few hours, without leaving Athens.
From upbeat Glyfada to the lake famed suburb of Vouliagmeni to the historical Cape Sounion, you can live the island life on the coastline of the Athenian Riviera – strolling the many bourgeoning seaside neighbourhoods like Voula and Agia Marina, or relaxing on the scattering of beaches that line this coastline. Without even having to board a ferry.

Visiting The Athenian Riviera – Where To Start

Sailing in Athens Riviera – Swap the City for the Saronic Gulf. It starts right here.

How Do I Get to the Athenian Riviera? 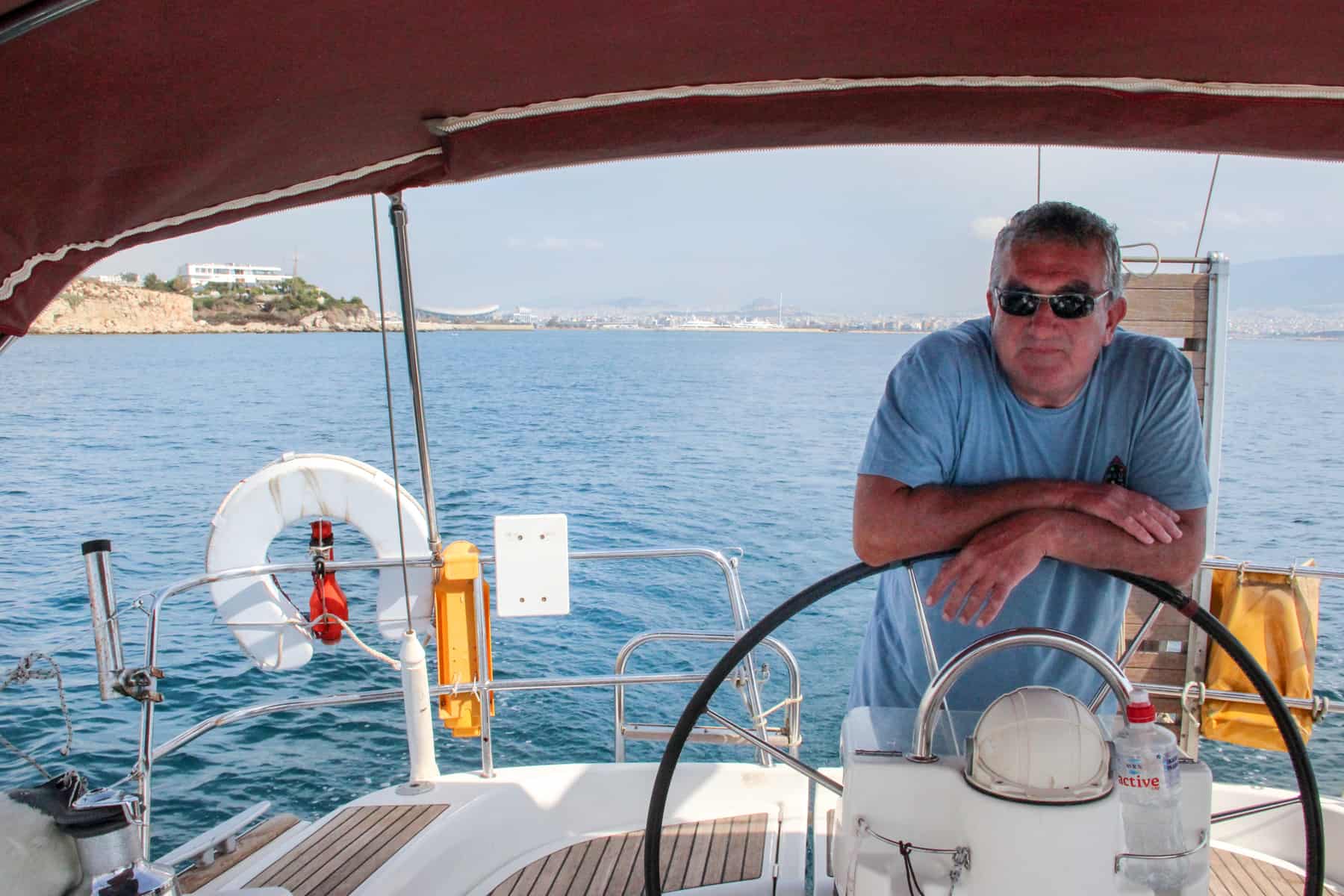 READ MORE: How to Travel to Athens – A City Explorer’s Guide for Greece’s Capital.
Athens Riveria by Bus
Pantelis was welcoming, friendly and all too eager to show us around his yacht before embarking on our mini adventure. He’d stop at all the scenic lookouts and let you clamber all over the boat in the curiosity of how it all worked. His livelihood and passion, it was clear he loved his job and took pride in where he was from. 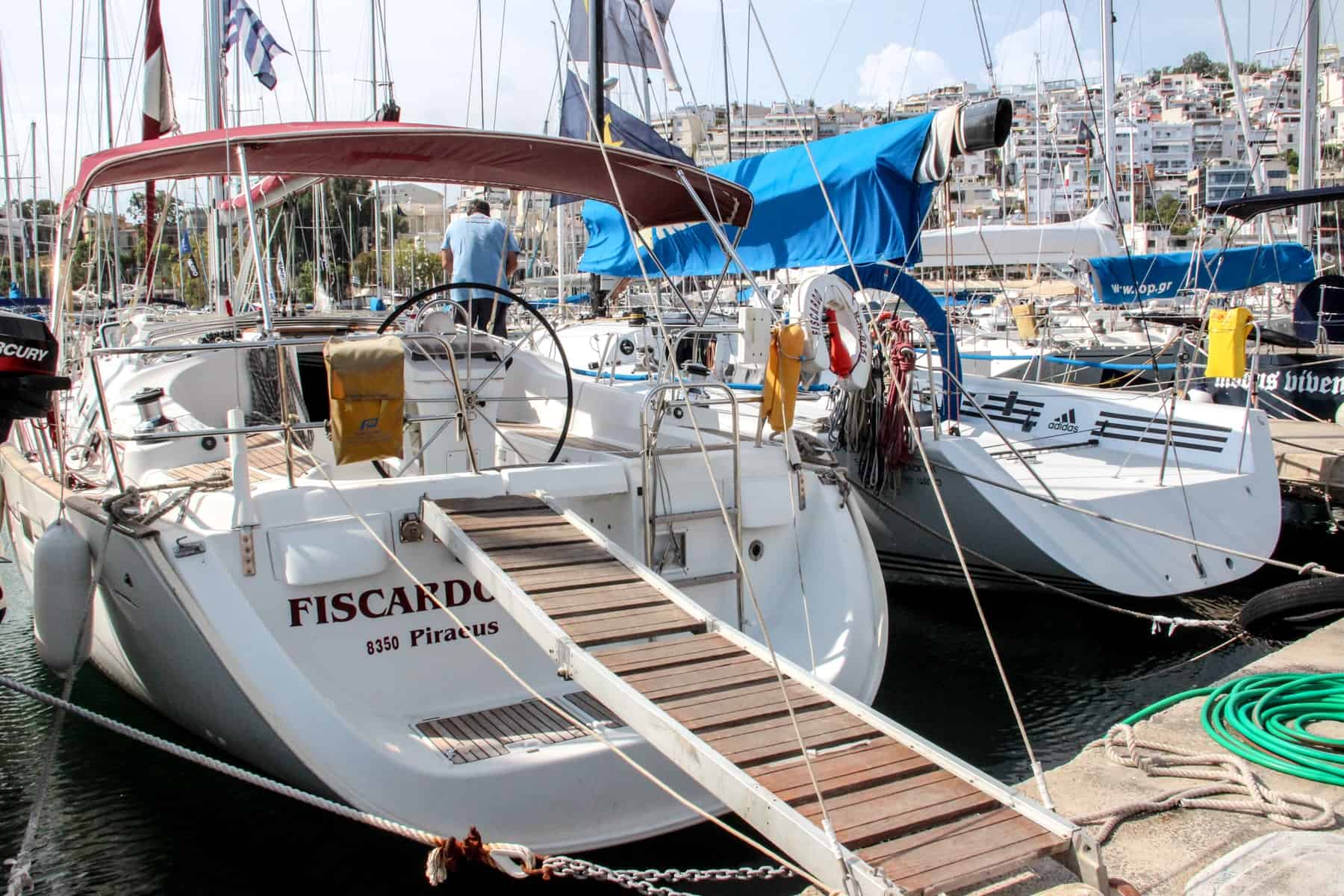 Athens is more than its inner-city bustle. Here’s how to plan a city escape visiting the Athens Riviera, without having to board a ferry. 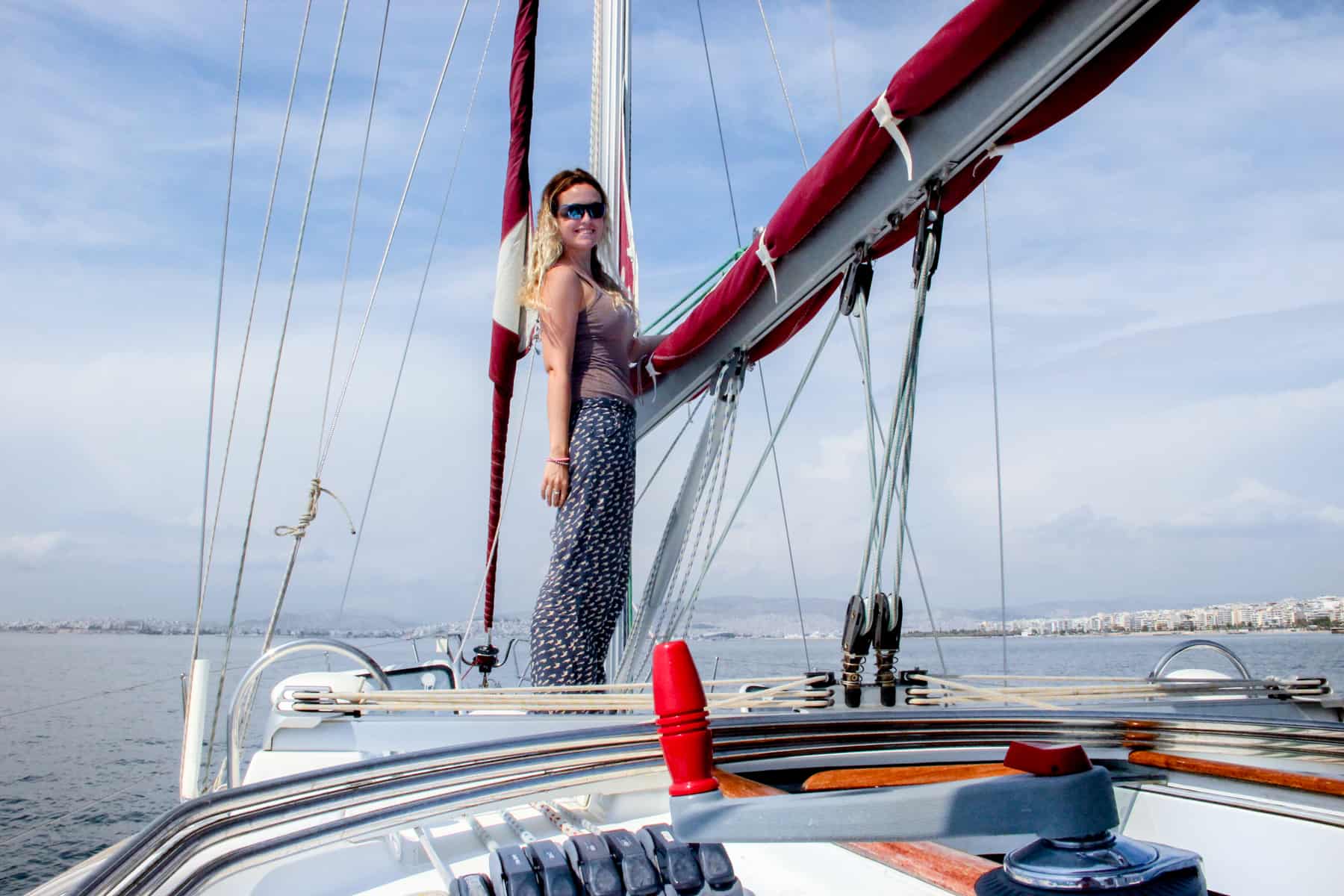 I was invited to try Athens Riviera Yachting by Marketing Greece. As part of their “I’m An Athenian”, I was sent to uncover the best of Athens, from the hidden hotspots to the best kept local secrets, with a little guidance on where to find them.

Finding verified boat owners in Athens isn’t so hard either. I was met at the marina by yacht owner and skipper Pantelis Karatzas, sourced from boating holiday specialists, Nautal – a rental platform connecting travellers with boat owners. Pantelis is one of over 700 verified, and you can charter a yacht for as little as €100 for the day. 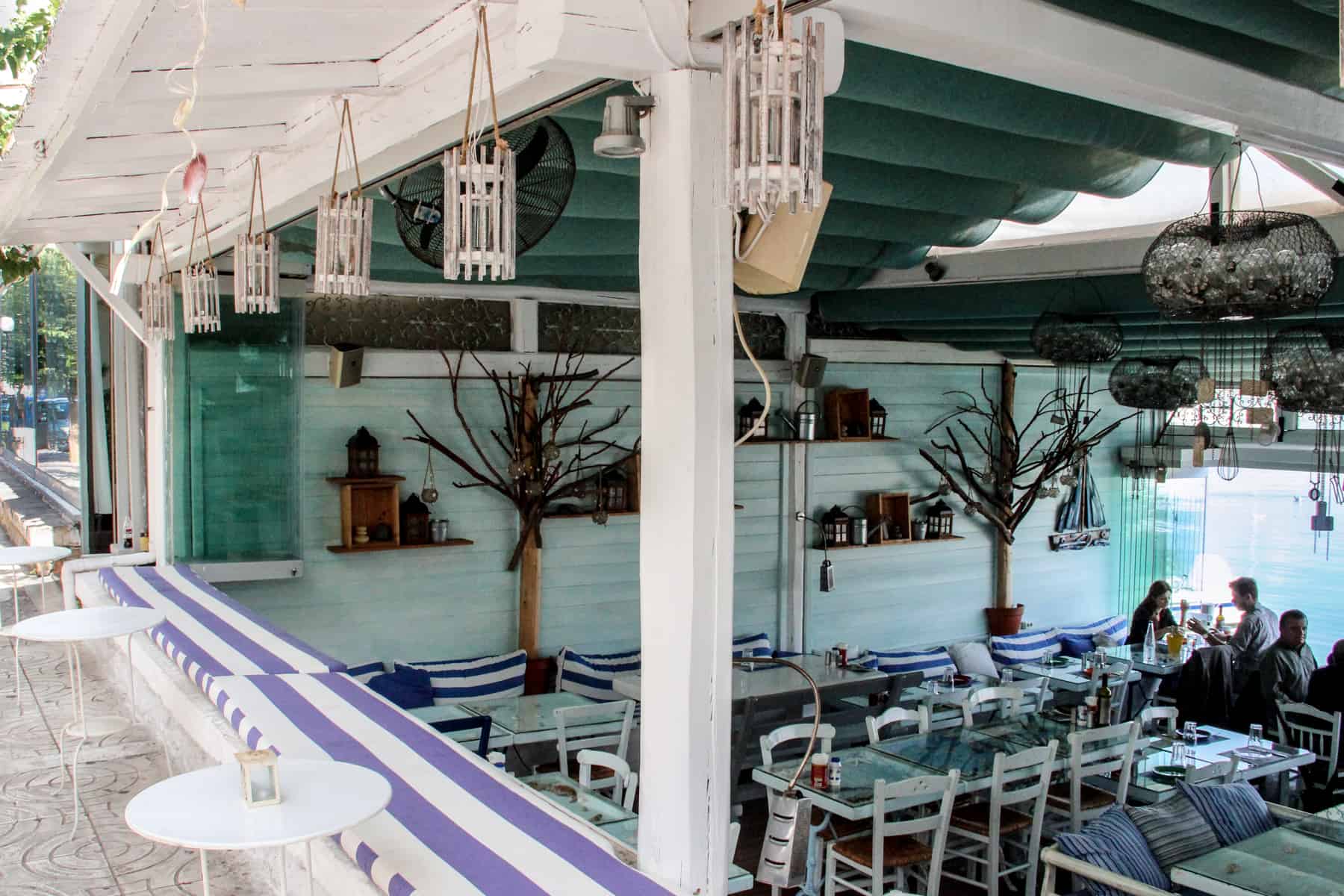 The bus X96 leaves from both Piraeus and Faliro metros with over 25 stops along the coastline towards Kalamaki Glyfada and Voula (where you can get a taxi or walk 30 minutes to Vouliagmeni Lake).
The Athens Riviera is located in the southern region of greater Athens and is more than 60km of coastline stretching from Piraeus to Sounion, the southernmost tip of Attica peninsula.
It felt strange jumping off the boat, leisurely dining at one of the many restaurants lining the marina, before being back within the heart of the city within minutes. But that’s what makes the metropolis of Athens special. You have everything you need in one place.
Athens Riveria by Metro / Subway 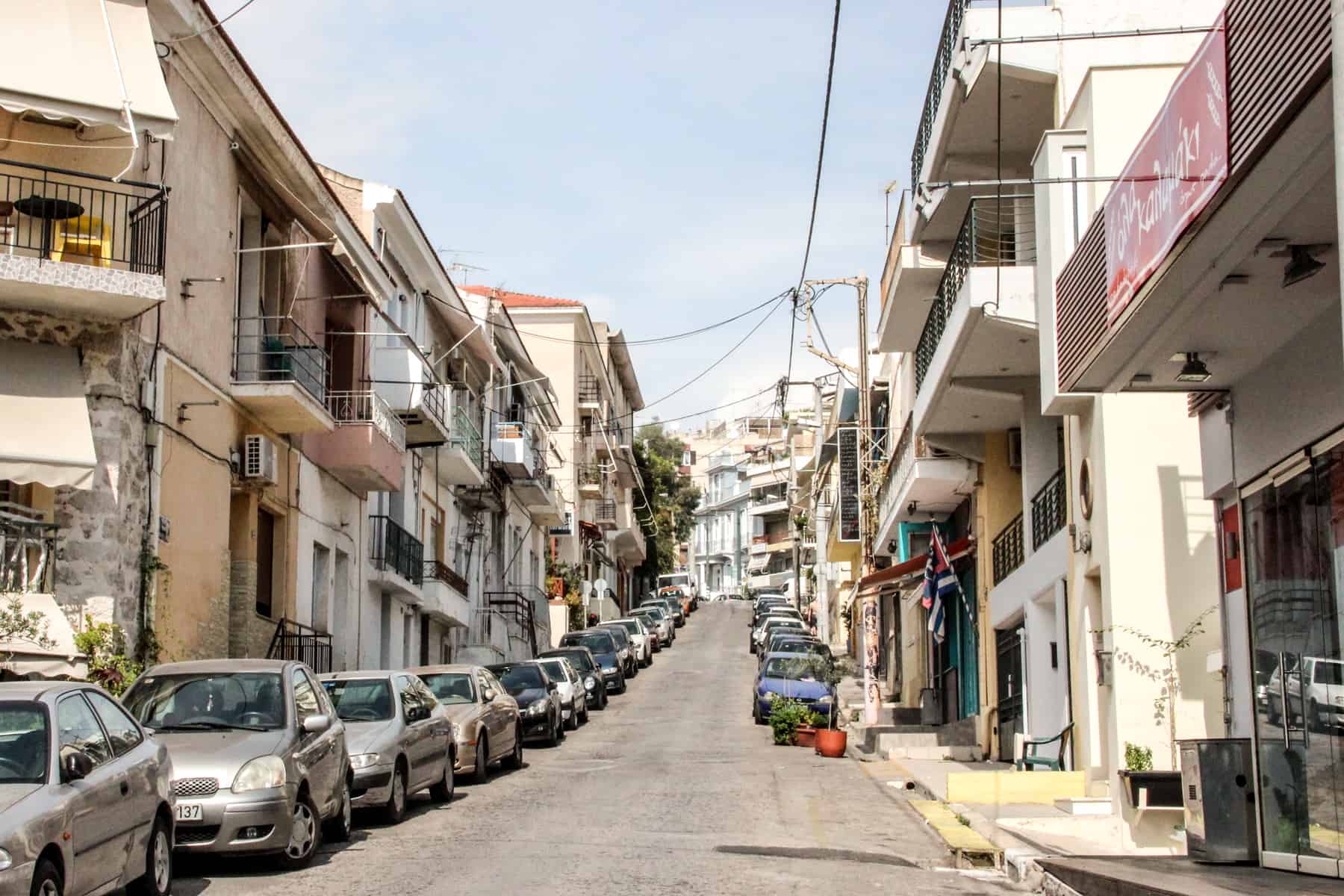 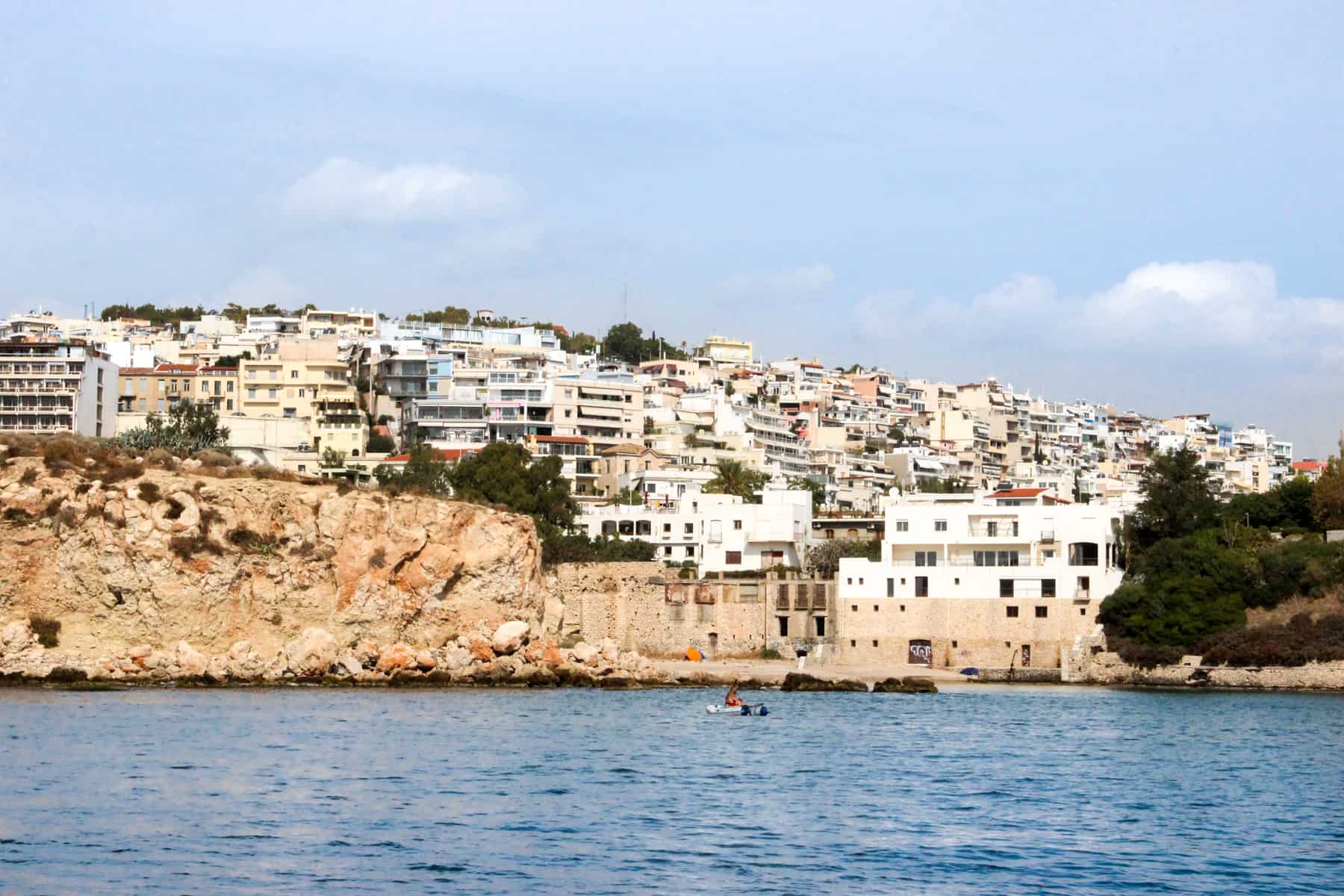 Is Athens Riviera Yachting Worth It?

You can set sail for an entire day, a long weekend or even customise a longer route with the help of your potential boat owner, whose knowledge may even include uninhabited islands to stop at or divulging their own, secret hotspots.
Hiring a private yacht charter, motorboat or sailboat on the Athens Riviera through Nautal isn’t only about short trips for a couple of hours.
The general feeling is that the boat is your very own, except you just have a master navigator at hand. Everything is about your own unique experience and where you want to go.
Good starting points are the Piraeus and Faliro metro stations, from which you can pick up a taxi or take a short walk to your desired area if closer to this end of the coastline.
If you have the experience, you don’t necessarily have to hire the skipper, only their boat, but personally, that would detract from the relaxation aspect a little.
Getting off the land is still a part of the city escape, and sailing the Athens Riviera you can relax on a deck of a yacht, cruising the vast open waters while looking at the city from an alternative viewpoint. The well-known hills of Lycabettus and Filopappos, in particular, look incredibly spectacular from afar.
Disclaimer: This post contains affiliate links to handpicked partners, including tours, gear and booking sites. If you click through or buy something via one of them, I may receive a small commission. This is at no extra cost to you and allows this site to keep running.