20. It was from the steps of the Lincoln Memorial that Martin Luther King delivered his “I have a dream…” speech on 28 August 1963.
12. Look closely and you’ll see that the stone of the Washington monument is in two shades. That’s because there was a two decade building hiatus during the Civil War. When construction work continued, a different stone was used to complete the monument.
9. The pesky Brits (apologies on behalf of my ancestors), nearly razed the Capitol Building to the ground during the War of 1812 but a fortuitously timed storm put the flames out.
7. Two Supreme Court judges had their faces printed on bank notes. But you’re unlikely to get hold of either since John Marshall was added to a 0 bill and Salmon P. Chase was printed onto the ,000 – if anyone has either of these bills, please send to me to verify ;p
24. The National WWII Memorial includes a curved Freedom Wall adorned with a field of 4,000 golden stars. Each of those stars stands for 100 American military deaths in the war.
There you have it, 25 interesting Washington DC facts. Got any to add? Drop a note in the comments below.
8. The Capitol Building is home to both the House of Representatives and the Senate. It’s located on top of Capitol Hill and, probably because the building is packed with very important and busy people, it has its own Subway system.
2. Today, Washington DC is located in the District of Colombia; a district that was created and named in honour of Christopher Columbus (before we all realised he was not the hero we all thought he was). The DC in Washington DC stands for District of Colombia. (Are you also having an ah-ha moment?)
1. Washington DC is not actually located in any of the 50 states of the USA. It was originally located in the State of Philadelphia but it was separated after the Revolutionary War (the American War of Independence from Great Britain) so that the federal government would be located in a federal district that was independent of the states it governed.
11. The Washington Monument is the tallest structure in Washington DC. It was the world’s tallest man-made structure until the Eiffel Tower was completed in 1889.
13. The Library of Congress is the research library for the United States Congress and has over 170 million items in its collection. That makes it the largest library in the world. Anyone else think it’s a shame these 170 million items aren’t all fiction books (or travel books)?
6. The Supreme Court is based in Washington DC. The court is the highest court in the USA.
Related Articles:
25. In front of the Freedom Wall is the inscription: “Here we mark the price of freedom.”
18. John Adams was the lucky president who was the first to live in the White House. Having moved into a ‘new build’ home myself, I hope he didn’t had half the trouble I had with my snagging list. 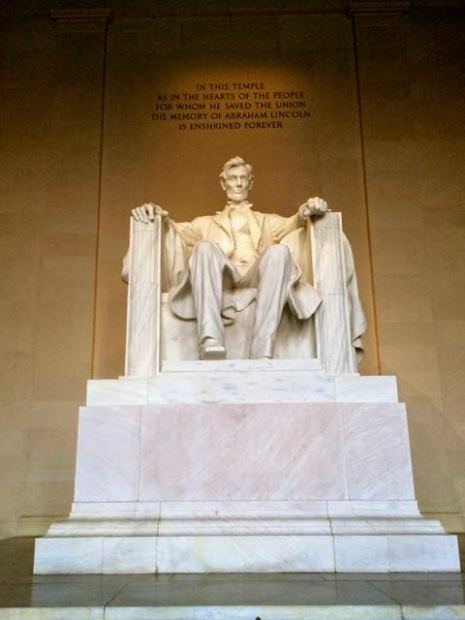 14. The National Mall comprises 146 acres of lawn that runs from the Potomac River all the way to the Capitol building. (Glad I’m not the landscape gardener).
23. The winner of the design competition for the Vietnam Veterans Memorial was an unknown, 21-year old student from Yale, Maya Lin, who beat all of the professional architects who entered. (The competition was anonymous). Although striking in black, the memorial is at odds with all of the white marble buildings and monuments that fill the rest of the National Mall.
Most people know that Washington DC is home to the White House but what else do you know about the Capital of the USA? If you’re not from the USA (or maybe even if you are), did you know that Washington DC is the capital of the United States or did you, like many people, think it was New York? In this article I’ll share with you some fun and interesting facts about this small but fascinating city.
16. Snakes on a plane? Yes. But snakes in a city? Not normally…unless you’re in Washington DC where garter snakes can be found. Although more commonly found in Mexico and the southern USA states, garter snakes have taken a liking to the nation’s capital (I’ll let you make a joke about politicians). The good news is they prefer bushes to bars and, while scary (aren’t all snakes?), they’re not poisonous.
15. The purpose of the National Mall is a place for public gatherings and many political rallies and events have been held here including the famous march on Washington for jobs and freedom.
19. The Lincoln Memorial was built in honour of the assassinated president but it took over 50 years from his death before the memorial finally opened. The reason? Bad design plans, funding, disagreements and, of course, red tape.
5. The Potomac River is the source of drinking water for around 90% of Washington DC.
22. The Vietnam Veterans Memorial was built in honour of those who fought in the Vietnam war. Names are still being added to the wall – in 2006 a marine corporal whose death from a stroke was determined to be the result of wounds received in action in 1967, was added to the memorial.
10. For just over a decade at the beginning of the 1900’s there was a law preventing any building being built higher than the Capitol. Although that law has long been repealed, there are still only 4 buildings in Washington DC that are higher than the Capitol: The Washington Monument, Basilica of the National Shrine of the Immaculate Conception, the Old Post Office and the Washington National Cathedral.
21. After President Lincoln was assassinated, plaster cast masks were made of his hands and face and it was those casts that were used to later create the likeness for the memorial (a bit creepy if you ask me).
17. George Washington, the first President of the USA, and the person who the capital was named after, oversaw the construction of the White House. However, he never got to live there because his term was up before the building was complete.
4. The Potomac River is 405 miles long and runs through Washington DC. It also runs through the states of Maryland, West Virginia and Virginia.