Skip to content
A statue was erected in 2014, to mark the 844th anniversary of the marriage – considered one of the most influential events in Irish History, which would give Strongbow succession rights to the Kingdom.

READ MORE: Kilkenny Medieval Mile – The First Medieval Capital of Ireland.
On a journey from Waterford to Kilkenny, you will visit cities that have become symbolic of the rich urban history of Ireland. Both have become cities of an accolade. Where adventure-seeking Vikings and zealous Norman invaders came and made their mark, imposed their ideas, and laid the characteristics of each city as they stand today.
If you are not on a self-drive route, you can plan and book rail and bus tickets on the Transport for Ireland (TFI) site.
Waterford, Ireland has a long heritage. One so long that Waterford is Ireland’s oldest city, where a Viking called Regnall came and moored his ship on this coastal fringe in 914, before he sailed off to York two years later, becoming King in both. 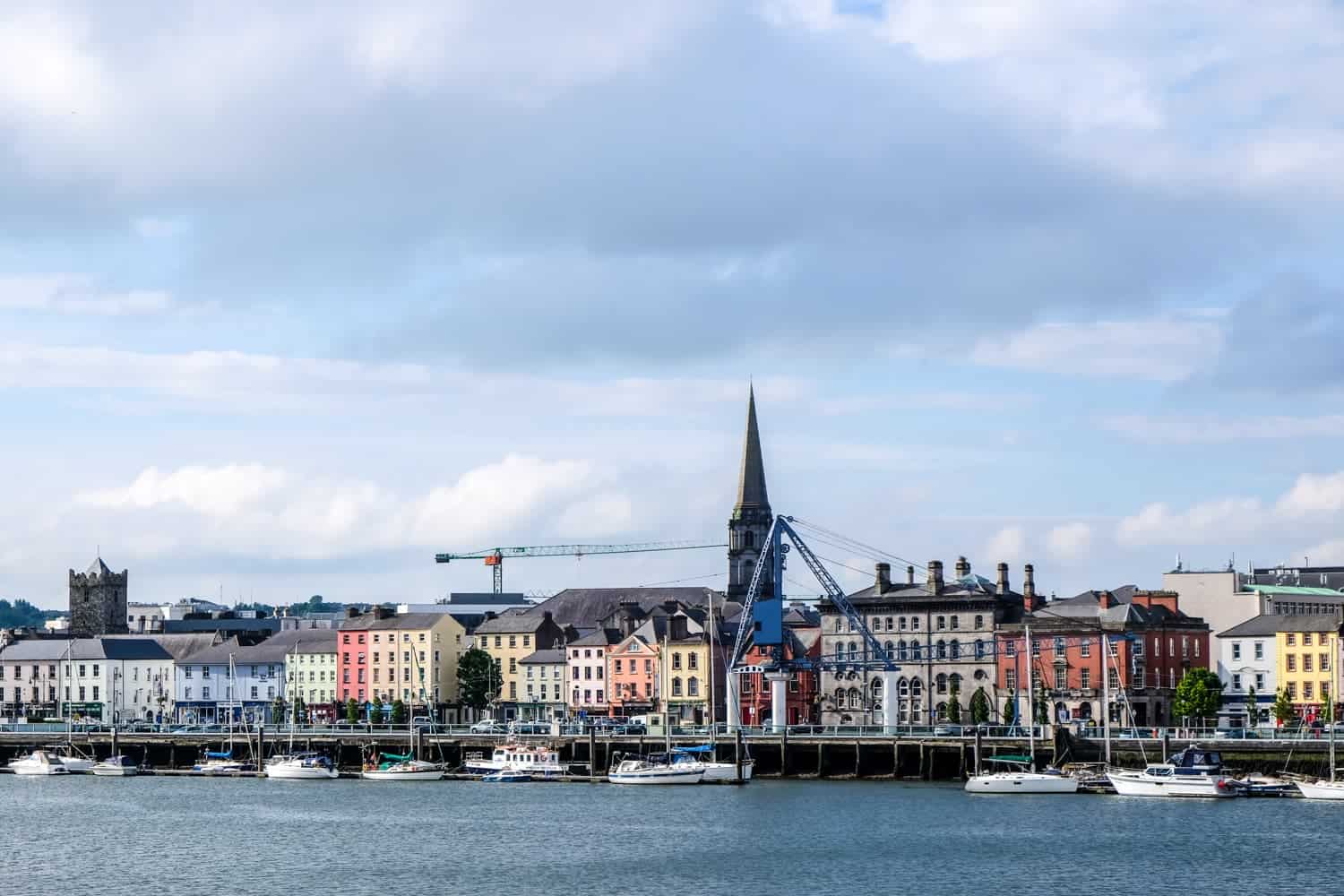 If you have more time, check out these extra things to do in Waterford, including surfing, hiking the Coumshingaun Loop, and a food tour. 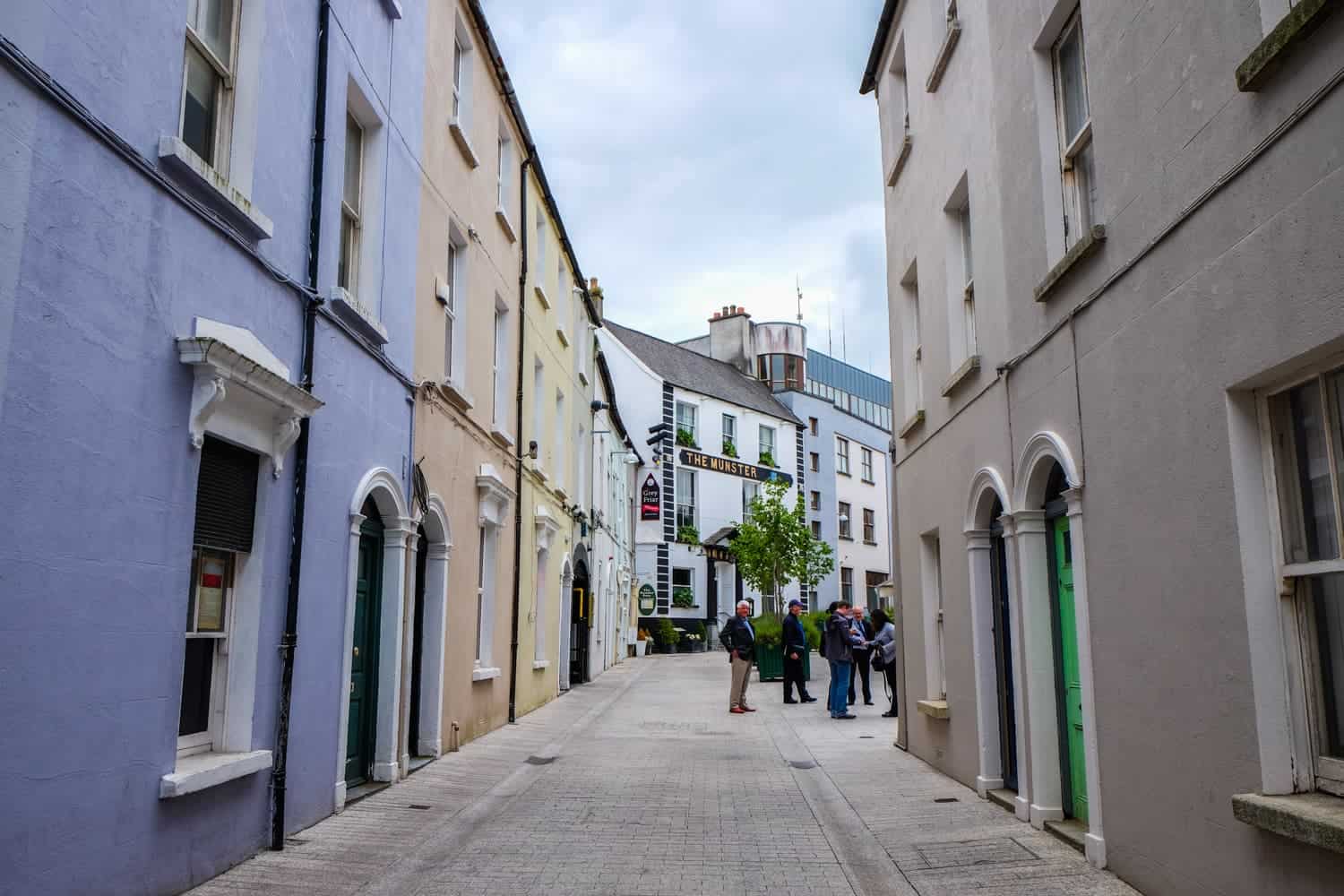 Take a walking tour of the Viking Triangle of Waterford
Go inside the Bishop’s Palace in Waterford
Watching the masters at work at the House of Waterford Crystal
In 1170, the city was captured by Anglo-Normans, who set in stone the first layers of what slowly grew to the modern city we see today. 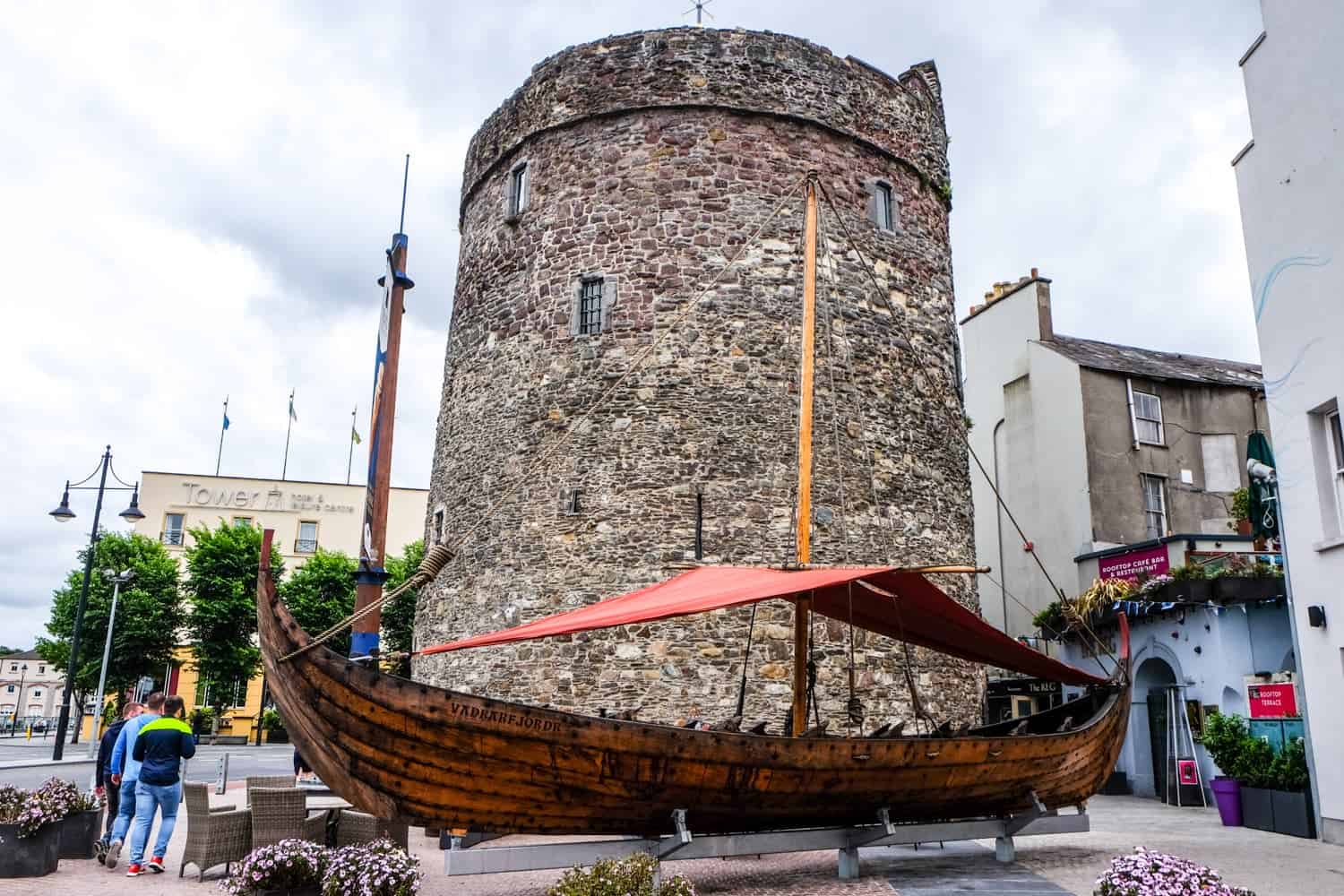 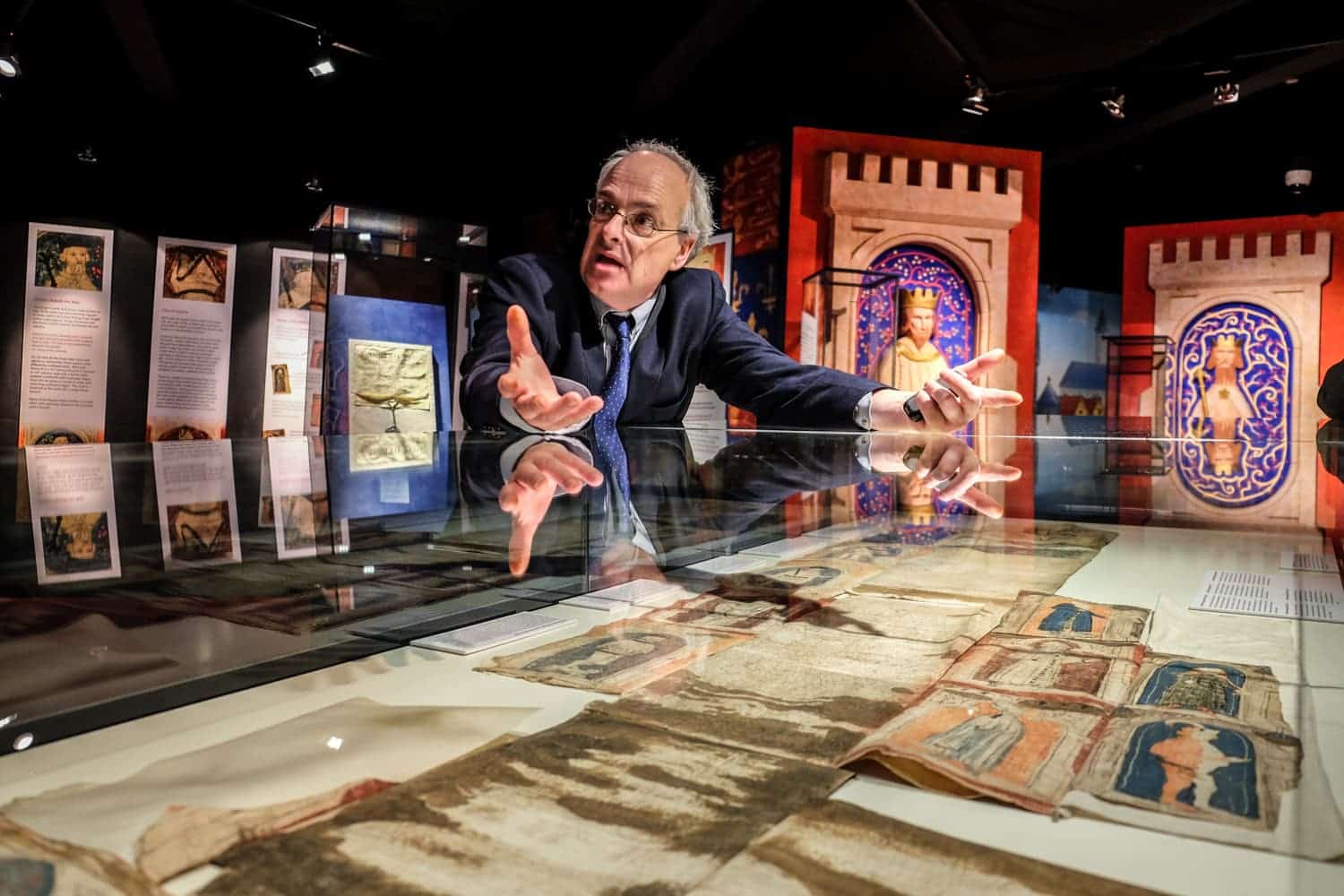 Dublin to Waterford: 2 hours and 40 minutes. 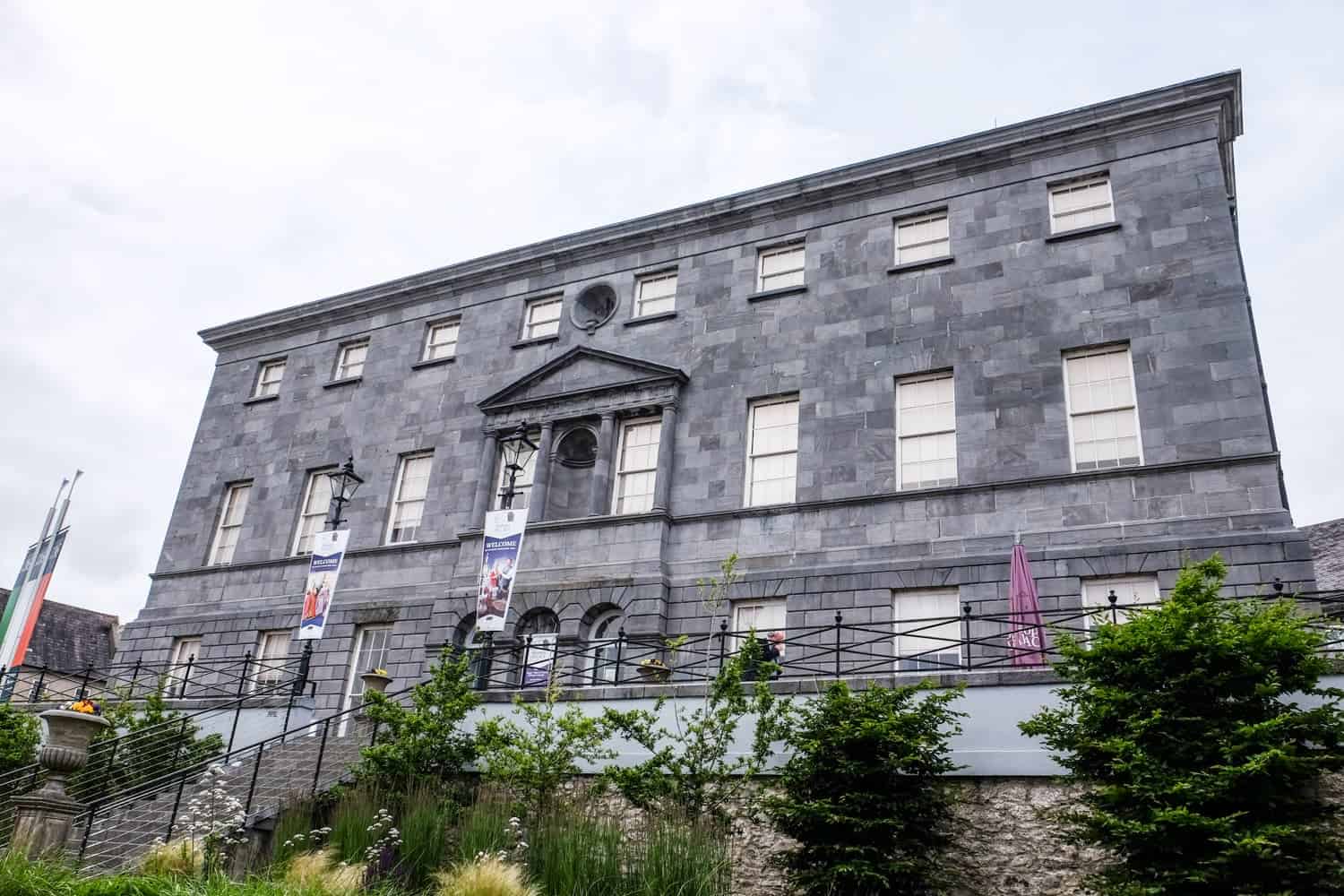 Tickets for the ‘Epic Tour of the Viking Triangle’ are available from the Medieval Museum or the Bishop’s Palace. 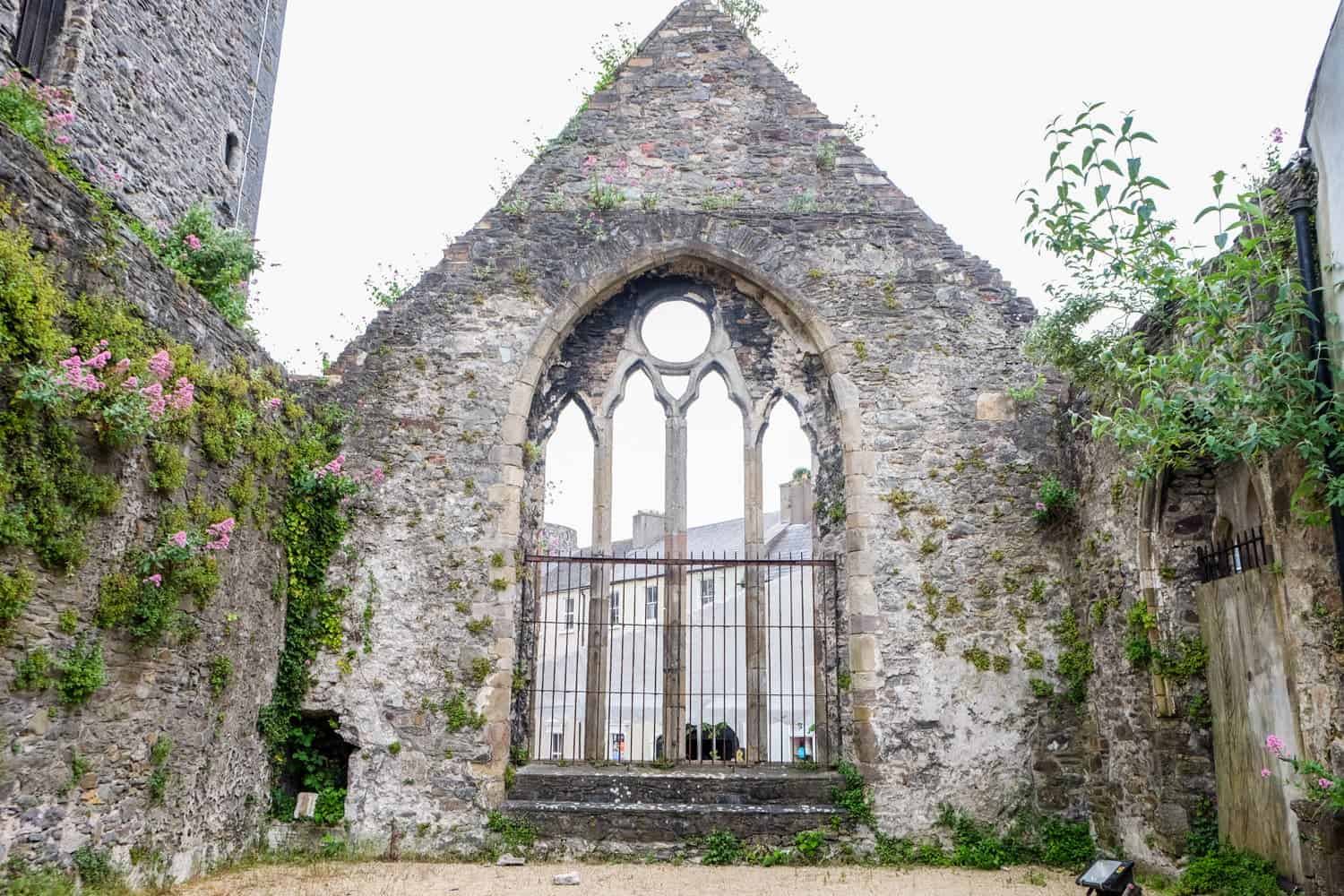 Line of the Medieval City of Waterford

Via the 736 Kenneally’s Bus Service or number 600 Dublin Coach
Those looking for a homestay style should check out the centrally located Trinity Apartments, ideal for two or more travellers sharing. This apartment comes with a kitchen, living room area with TV and free WiFi. 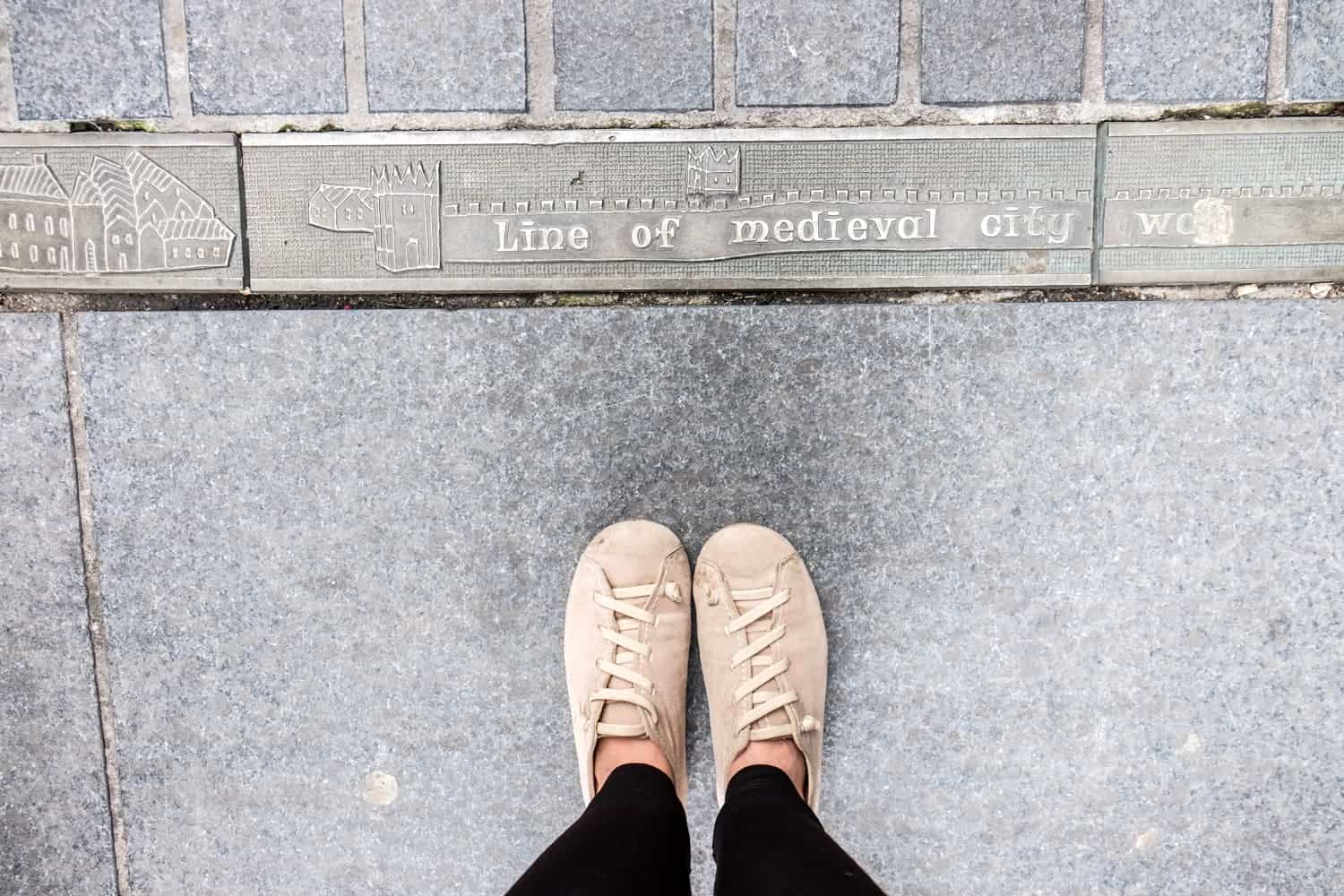 On the site of the original 9th century Viking Settlement, I walked in the footsteps of adventurous Regnall in what is now a compact area of Waterford’s Old town.

Waterford to Dublin: 2 hours and 40 minutes

The Dyehouse is a bed and breakfast with funky decor and fun vibes located close to Reginald’s Tower and House of Waterford Crystal. Run by lovely hosts with great reviews.
Soon, you will notice the connections of Ireland’s Southeast. For example, Strongbow (the Norman who invaded Kilkenny) married his wife, Aoife in Waterford. Her father gave her to Strongbow not long after the Norman invasion of Ireland that he, the King of Leinster, had requested. 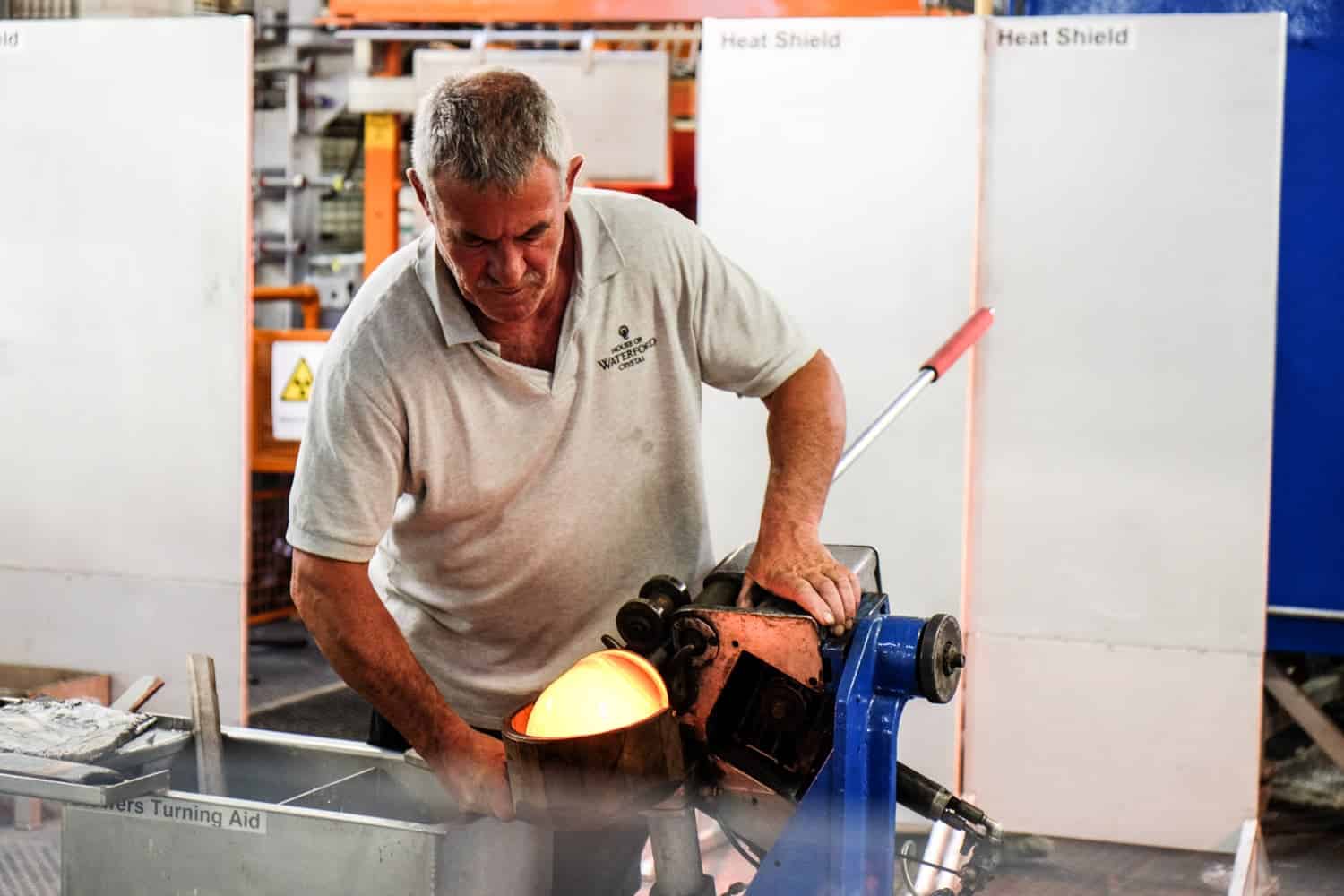 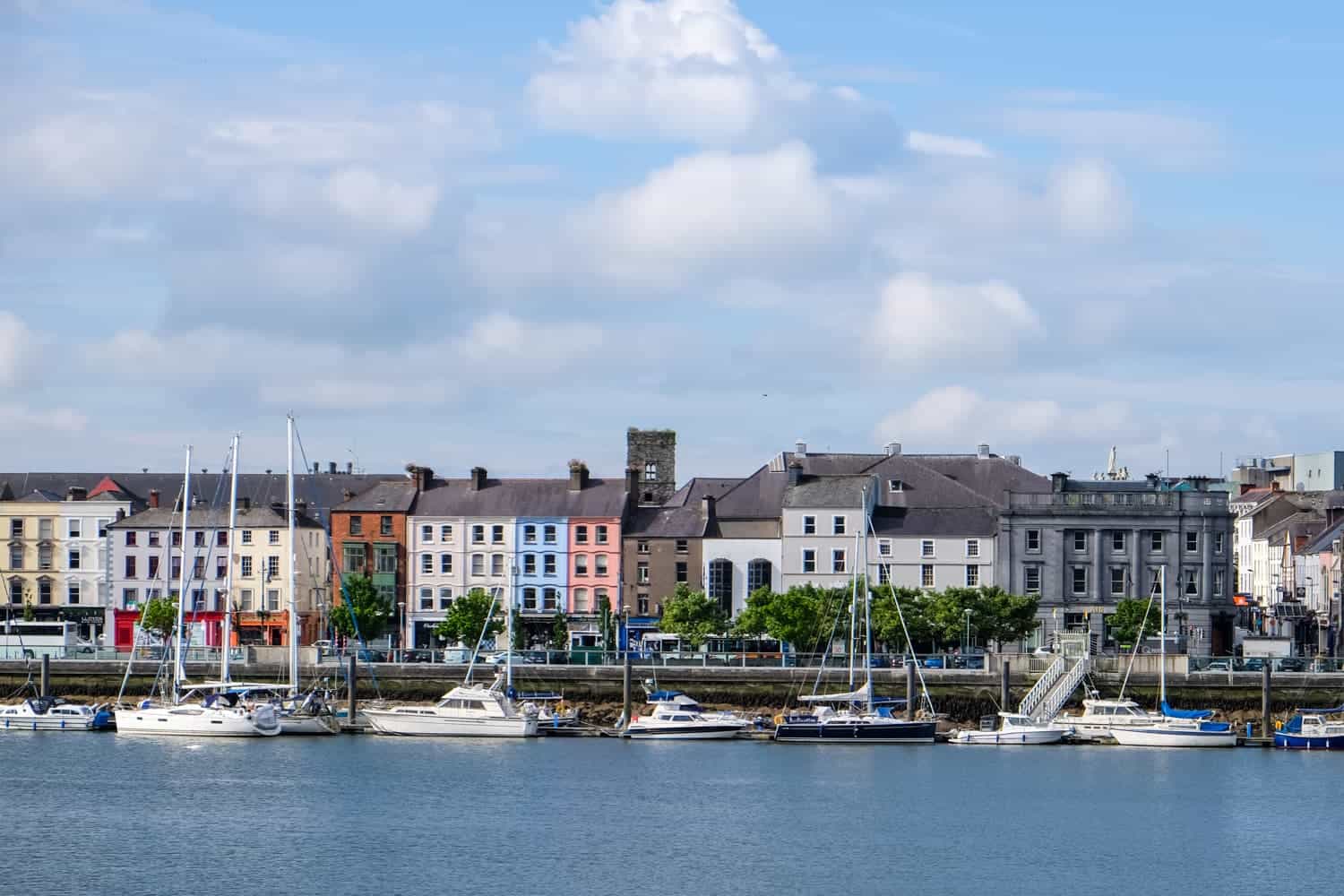 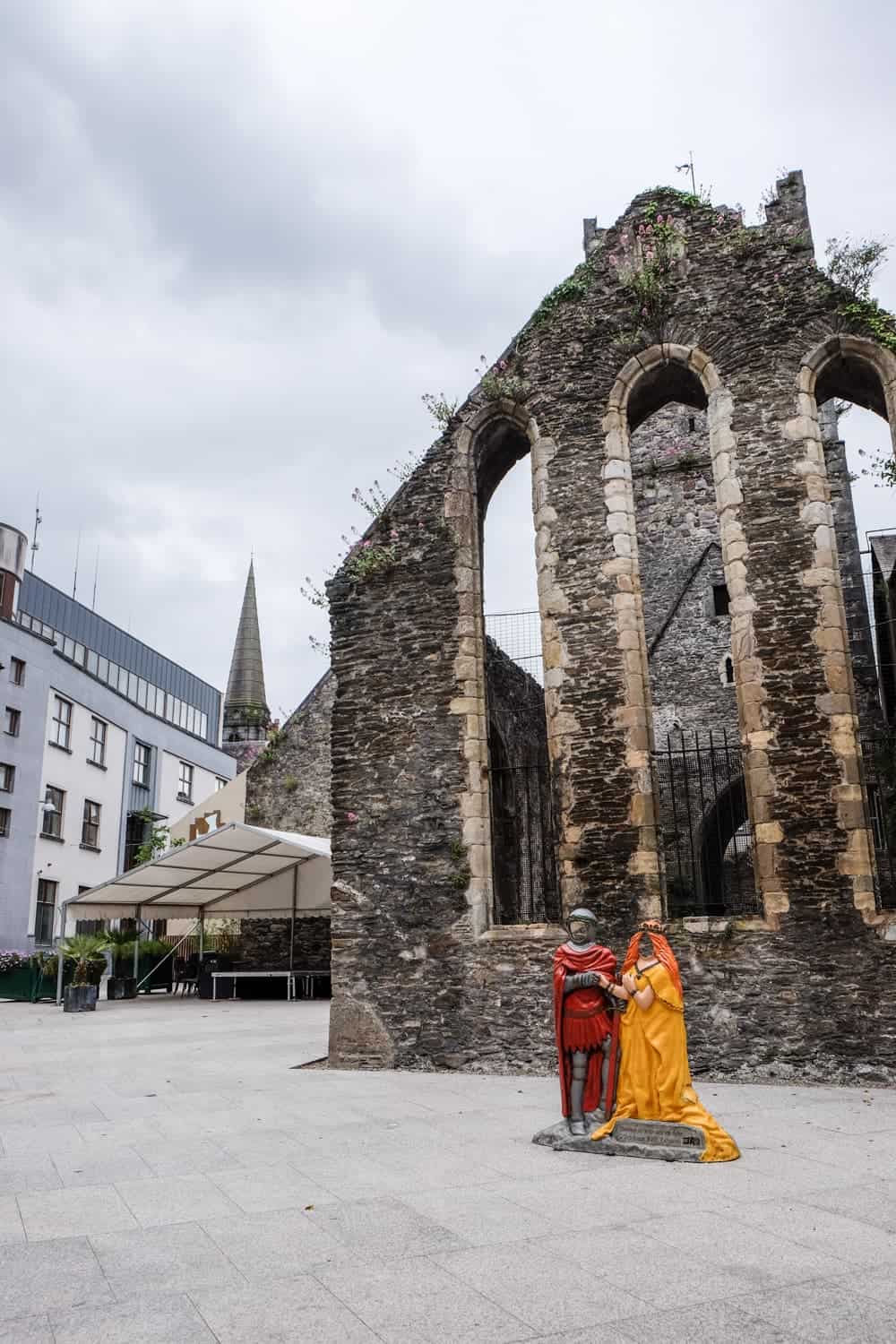 At over 1,100 years old, Waterford is the city dubbed as ‘where Ireland began’.
In European history, the Middle Ages or medieval period lasted from the 5th to the 15th century. Wander through 5,000 years of history as I did by travelling around the southeast region of Ireland. My trip was in conjunction with Ireland Tourism as part of a campaign to bring the country’s centuries-old history to life.
Accessible by foot and in the nooks and crannies of old spaces, this trail is easily navigated, although there is a costumed tour known as Epic Tour of the Viking Triangle.

How to Get to Waterford

Aside from being a lively cathedral city filled with pubs, bistros, and shopping, the city of Waterford is world-renowned for its crystal. The House of Waterford Crystal factory is a fascinating insight into the handcrafted designs that have provided it with a modern legacy, often passed through generations.

Dublin to Kilkenny: 2 hours – 2 hours and 30 minutes
The most frequent and direct service is the number 736 Kenneally’s Bus Service.
Via two routes, I was able to immerse myself in a journey that quite literally paved the timeline of conquest and cultivation – in Kilkenny’s Medieval Mile and Waterford’s Viking Triangle. Each safeguards their city’s early beginnings, while a modern vibrancy grows around it. And if you are debating Waterford or Kilkenny, don’t. Find the time to immerse yourself in both cities, as they have such different historical offerings.
This journey is on the Kildare/Waterford Rail Service or you can take the frequently running number 600 Dublin Coach.

Between Waterford and Kilkenny

In just a few short hours, I was able to gain a better understanding of the history from the triangle’s hotspots – the colourful artefact-filled Medieval Museum and the 18th century Bishop’s Palace (recording Waterford’s history from 1700-1970). The Christ Church Cathedral and Reginald’s Tower (housing a Viking exhibition) that stands next to a replica 40 foot Viking longboat.

Kilkenny to Dublin: Approximately 2 hours.
Kilkenny to Waterford / Waterford to Kilkenny: 53 minutes via Irish Rail.
Disclaimer: This post contains affiliate links to handpicked partners, including tours, gear and booking sites. If you click through or buy something via one of them, I may receive a small commission. This is at no extra cost to you and allows this site to keep running.
Via the 600 Dublin Coach or the Kildare/Waterford Rail Service.

Where to Stay in Waterford

Tour the Waterford Viking Triangle and visit the preserved landmarks of the Viking Settlement and the oldest city of Ireland.
Alongside the singular ancient relics whose crumbling walls echo the stories of 5,000 years from their rolling green and hilltop settings, Ireland’s Ancient East preserves in its cities the very foundations of the country’s civil growth.

Things to Know About the Medieval Cities of Ireland

Visiting the Medieval Museum in Waterford

Visiting Kilkenny and Waterford form part of an accessible round trip from Dublin. The two cities are less than one hour apart in journey time, via Irish rail or by road. If you want to visit both, the easiest routes are as follows:
A famous view of Waterford – Ireland’s Oldest City