Skip to content
On St Kierens Street is the famed Kytelers Inn – the oldest of all in Kilkenny and at the centre of Ireland’s (and it is said Europe’s) only witch trials took place here in 1324.

Visit Kilkenny Castle in your Ireland’s Ancient East journey
Walking along the Medieval Mile in Kilkenny, Ireland
A Kilkenny hostel option is the Tourist Hostel located in an 18th-century townhouse with a mix of private rooms and dorms. Right in the heart of the city for easy access to historical hotspots, nightlife and access to public transport.
Visit the Kilkenny Medieval Mile, and retrace the 1500-year legacy of this old capital of Ireland on a historical trail through the city. 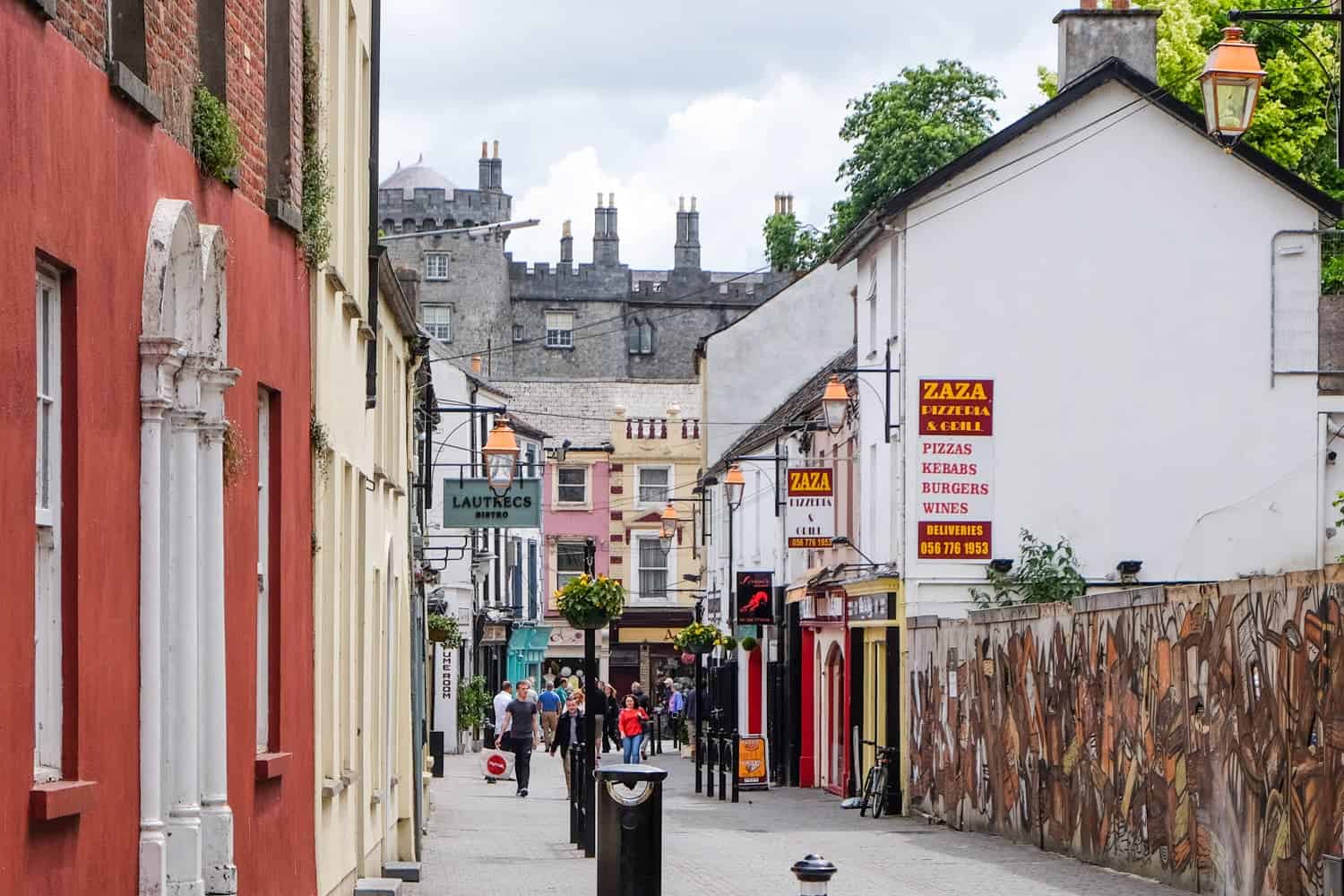 Kilkenny, Ireland is the medieval stronghold of the ancient east. Once the great medieval capital of Ireland, Kilkenny’s 1,500 years of heritage runs through its laneways, stairwells, walled-city gates, towers, and stone-clad landmarks. 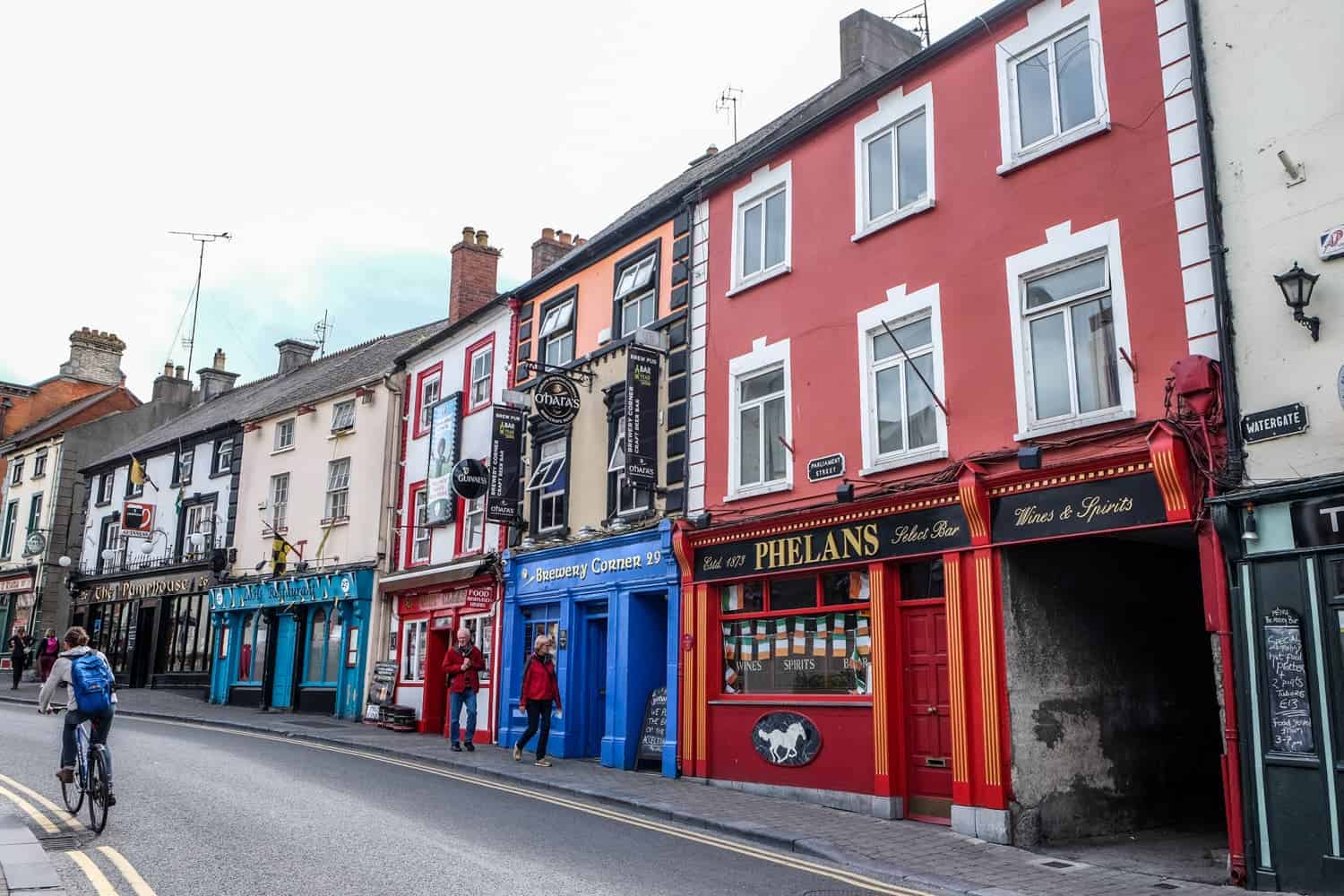 Back to the 9th century where the round tower stands beside the 13th St Candice’s Cathedral – one of two medieval towers in all of Ireland that can be climbed.
On a journey from Kilkenny to Waterford, you can visit two cities associated with the rich urban history of Ireland – where Viking and Norman invaders made their mark. These historical trails are preserved and it’s worth combining the two cities to retrace history via the Medieval Mile and Viking Triangle routes of Ireland’s Ancient East.
This is via the 600 Dublin Coach or the 717  bus service (operated by JJ. Kavanagh & Sons).
The two cities are less than one hour apart in journey time, via Irish rail or by road. If you want to visit both, the easiest routes are as follows.
This journey is on the Kildare/Waterford Rail Service or you can take the frequently running number 600 Dublin Coach. 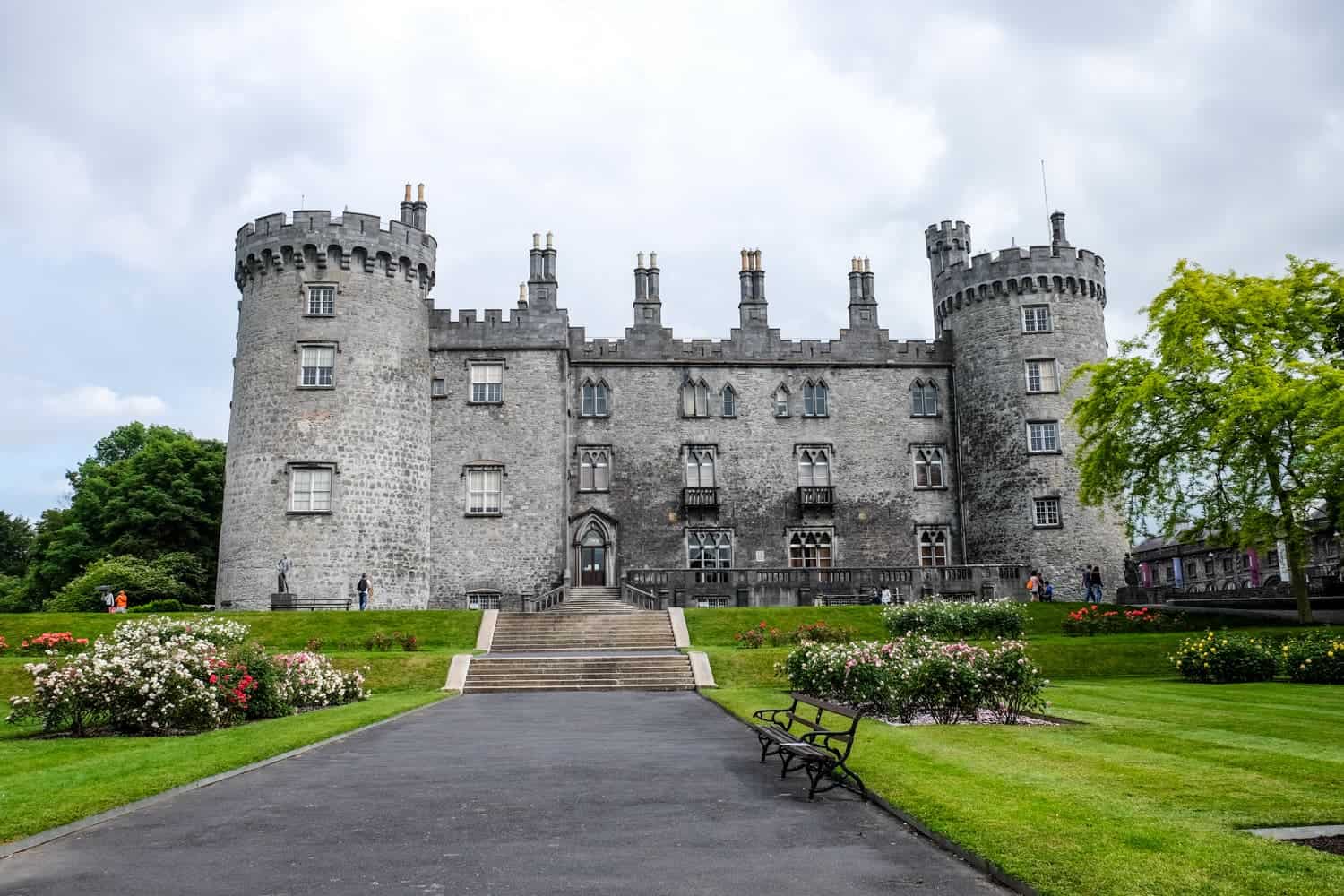 Mary’s Lane and Coffin Lane are two of many lanes in the medieval mile, or you can clamber down the steps of the arched alleyway from 1616 called Butter Slip, that connects the modern High Street to the picturesque medieval street of St Kierens. 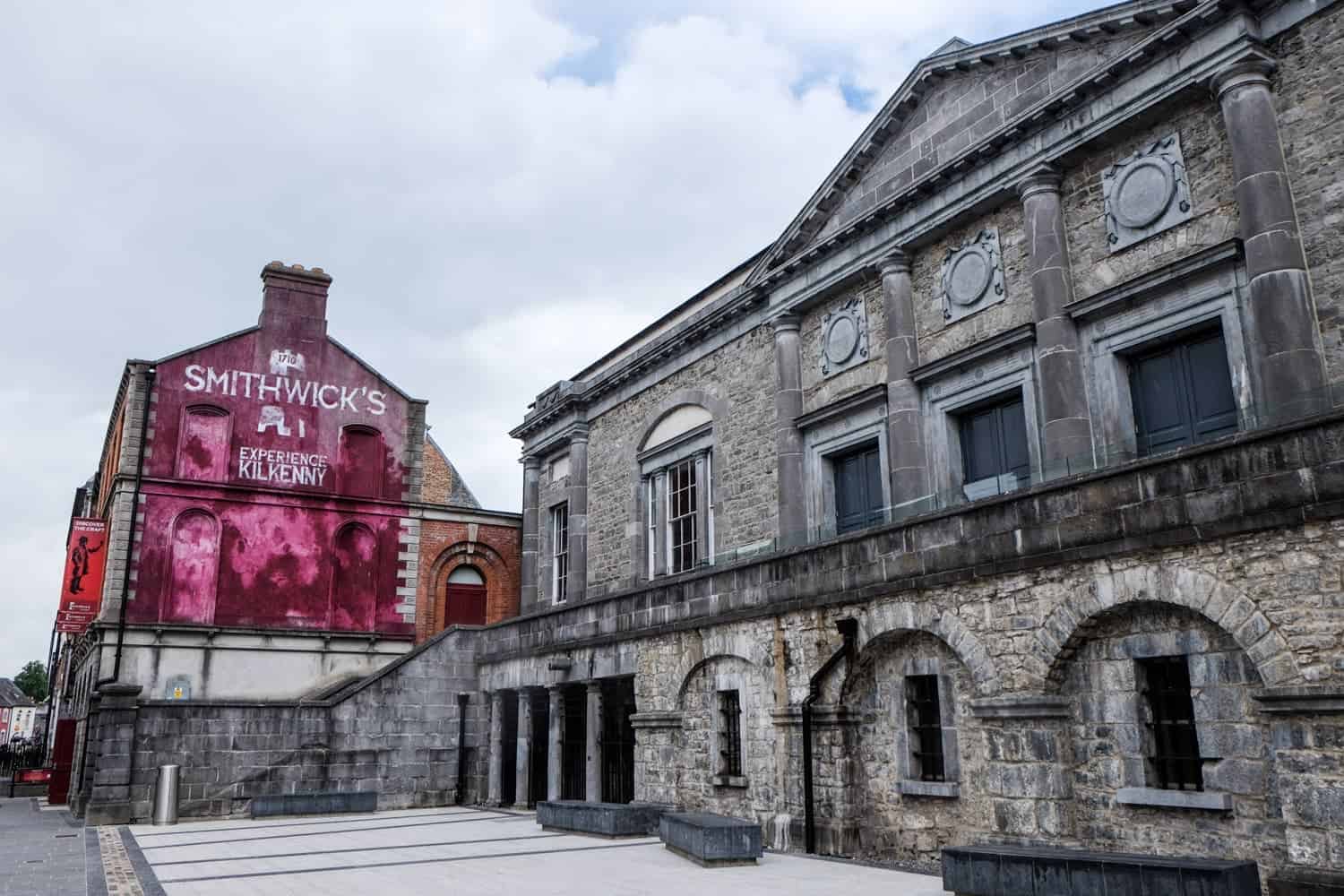 Laneways that connect the Medieval Mile divert visitors in the modern high streets back into the old. 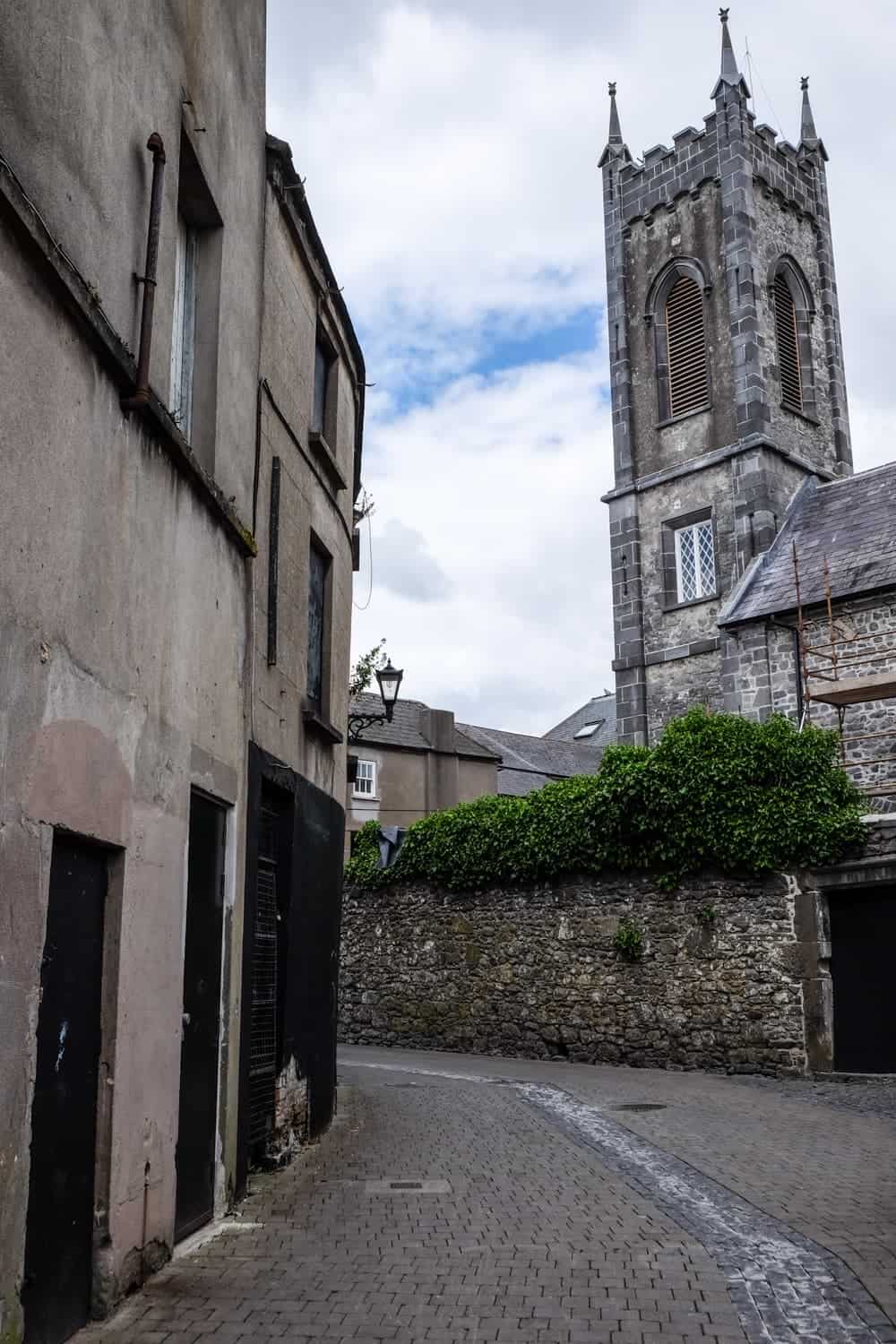 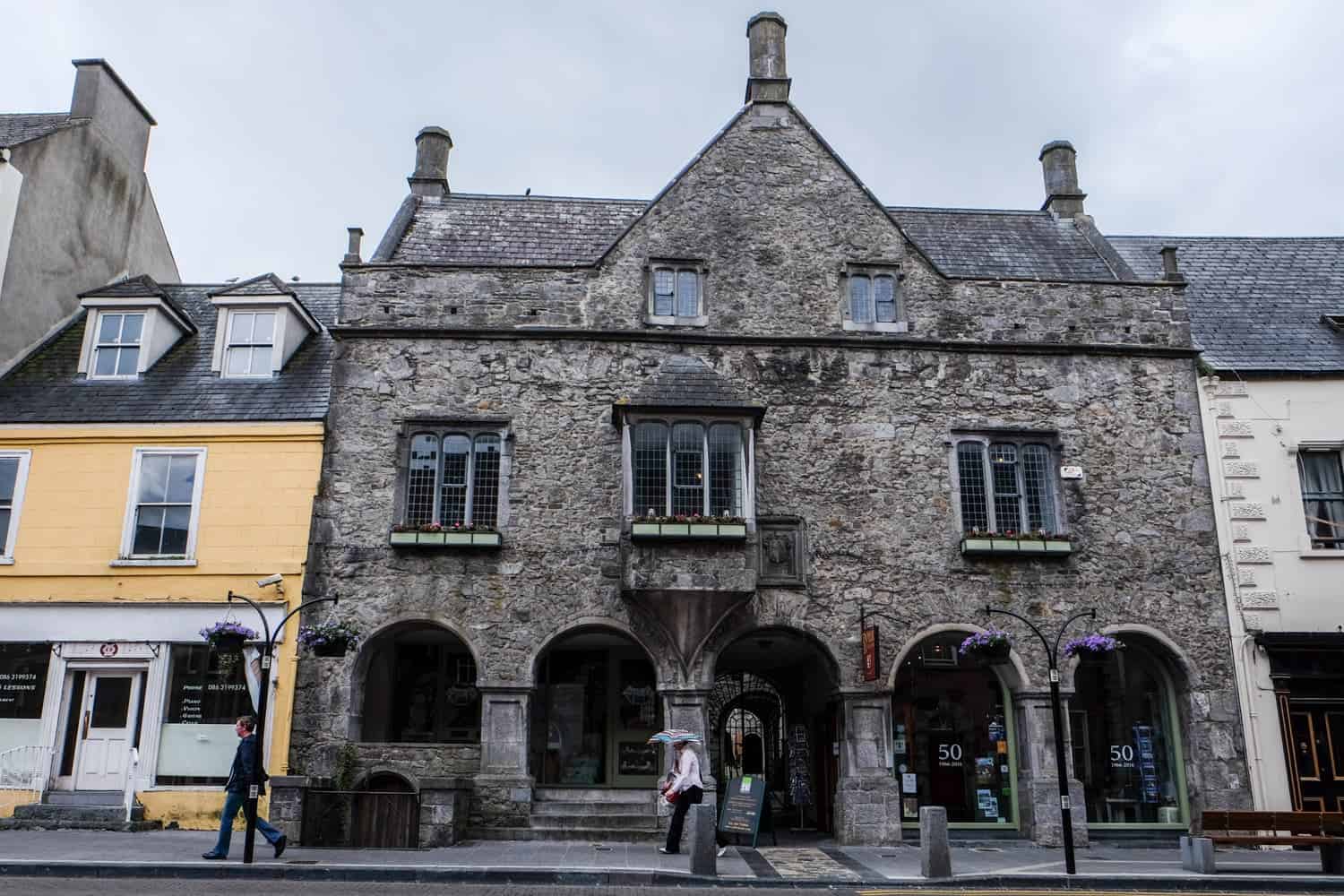 Waterford to Dublin: 2 hours and 40 minutes 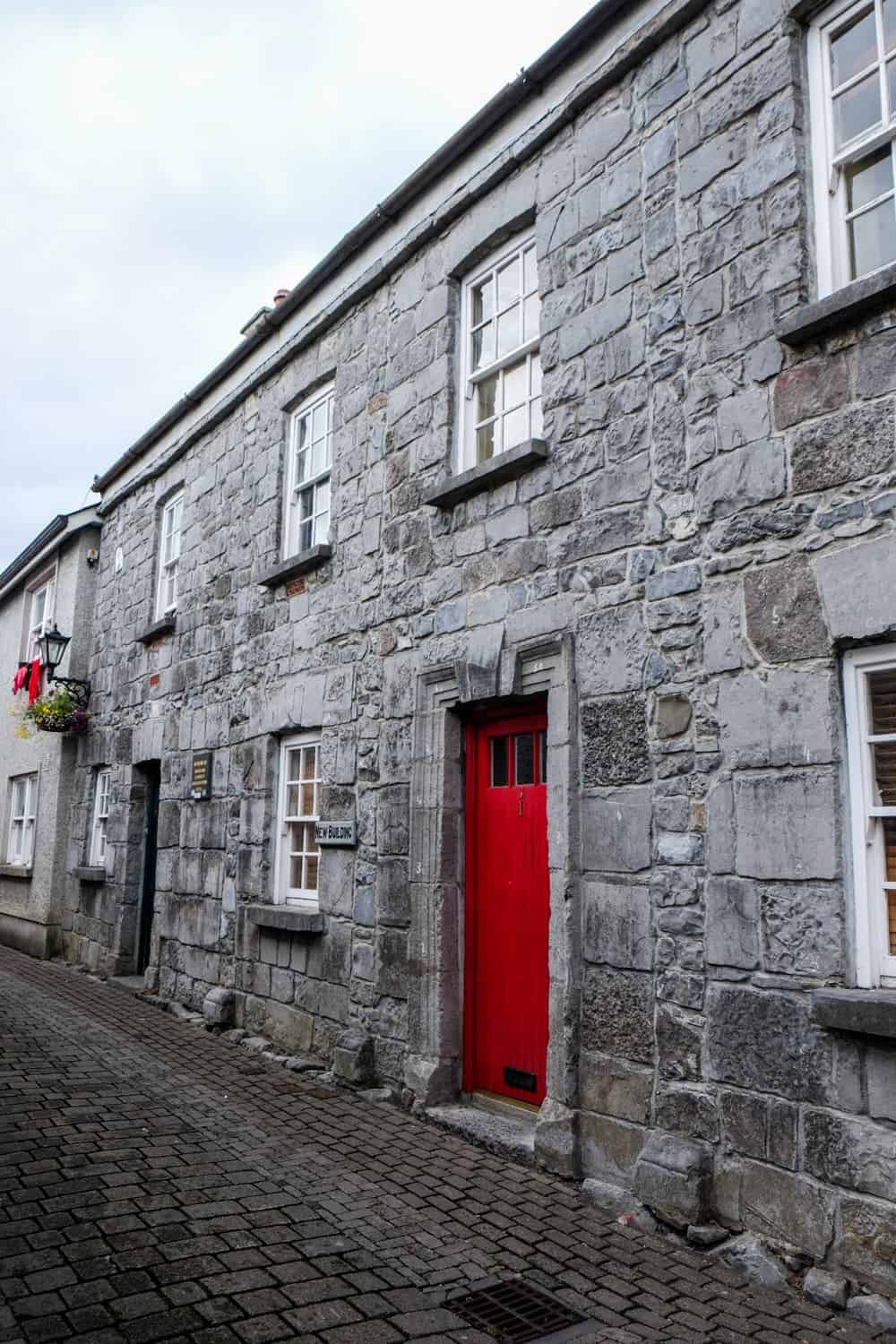 Waterford to Kilkenny / Kilkenny to Waterford: 53 minutes via Irish Rail.
I stayed at the beautiful Kilkenny Pembroke Hotel 4-star property right behind the Castle. Stylish decor and with the on-site Statham’s Bar & Restaurant offering traditional Irish and international food. 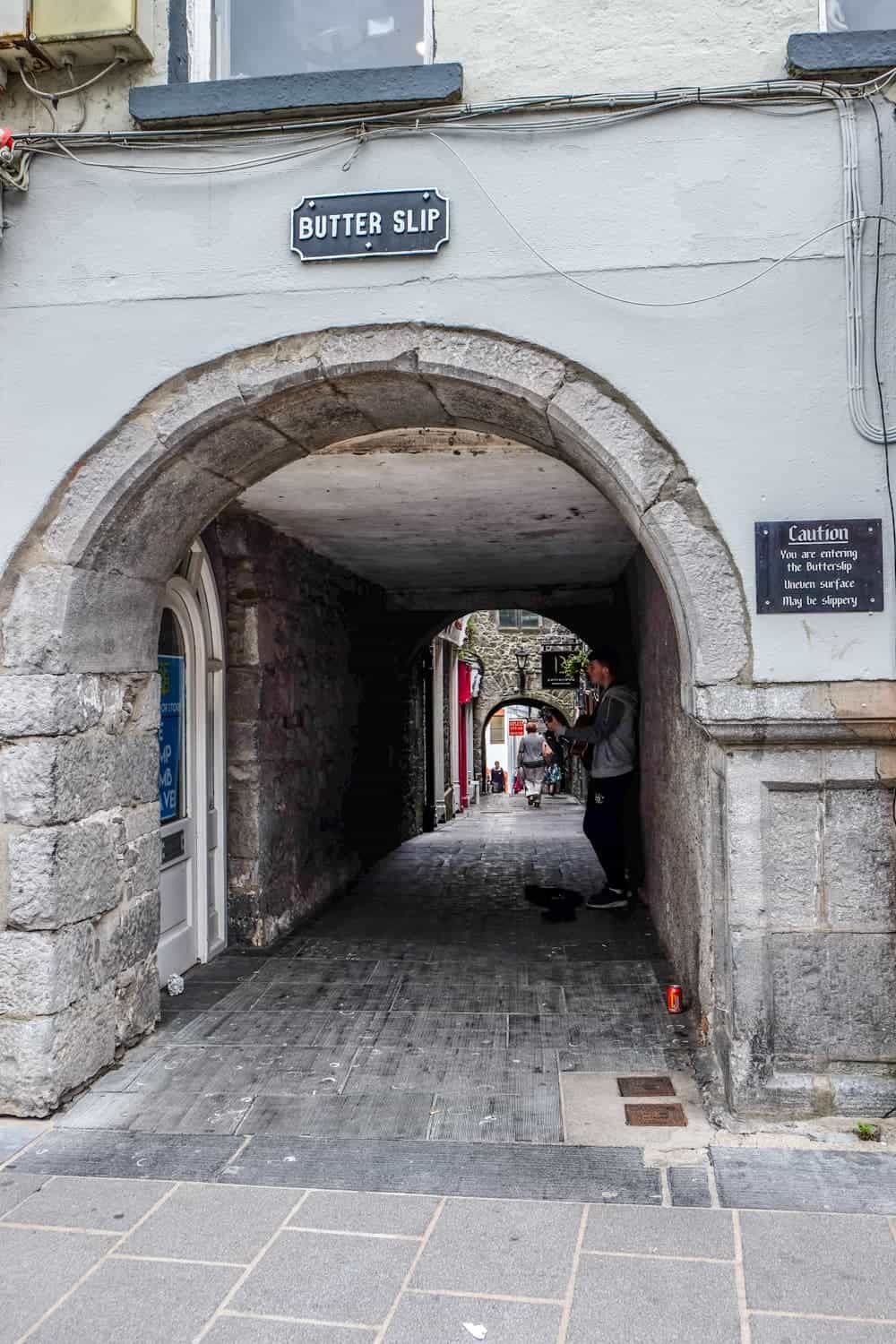 Via the 600 Dublin Coach or the Kildare/Waterford Rail Service. 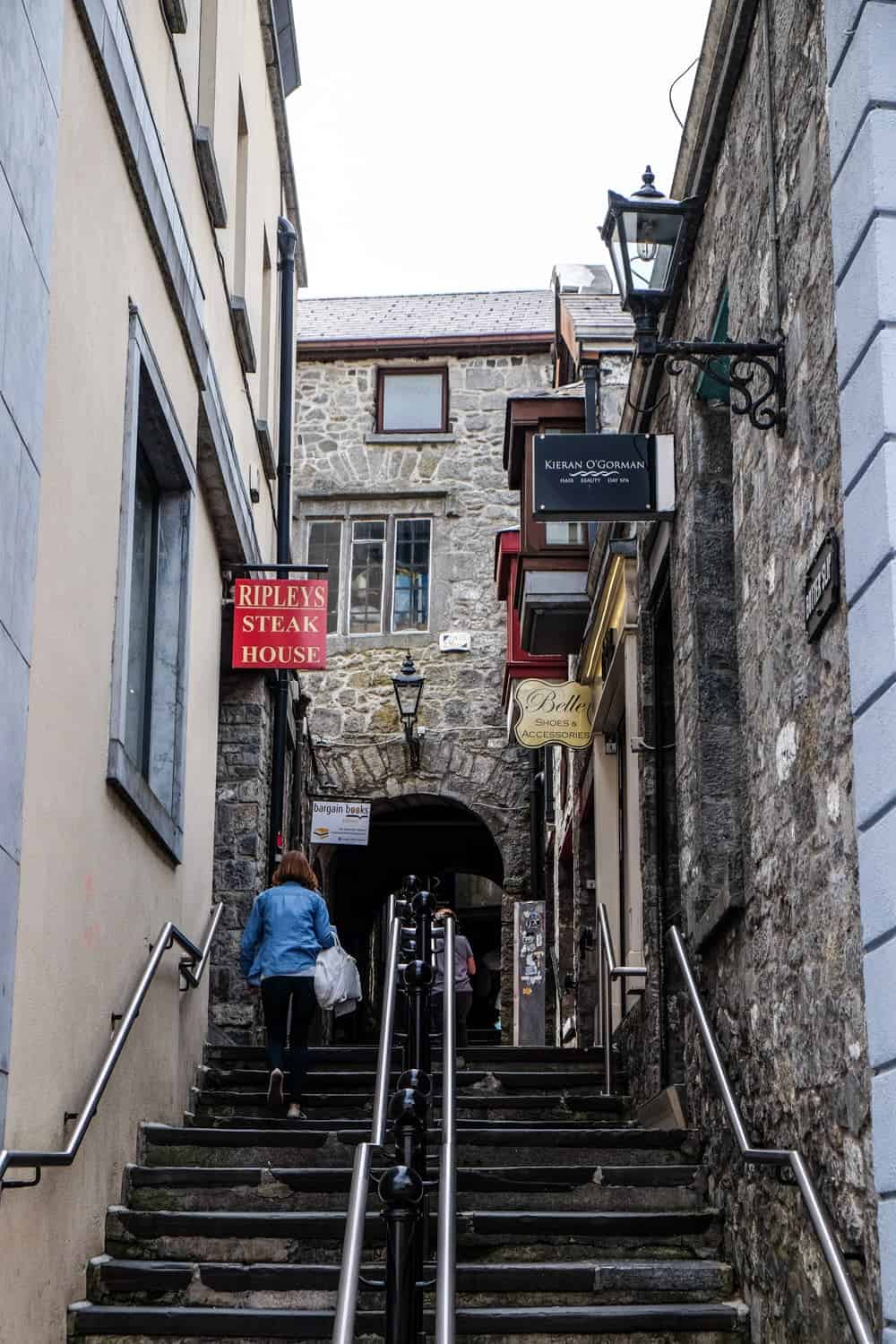 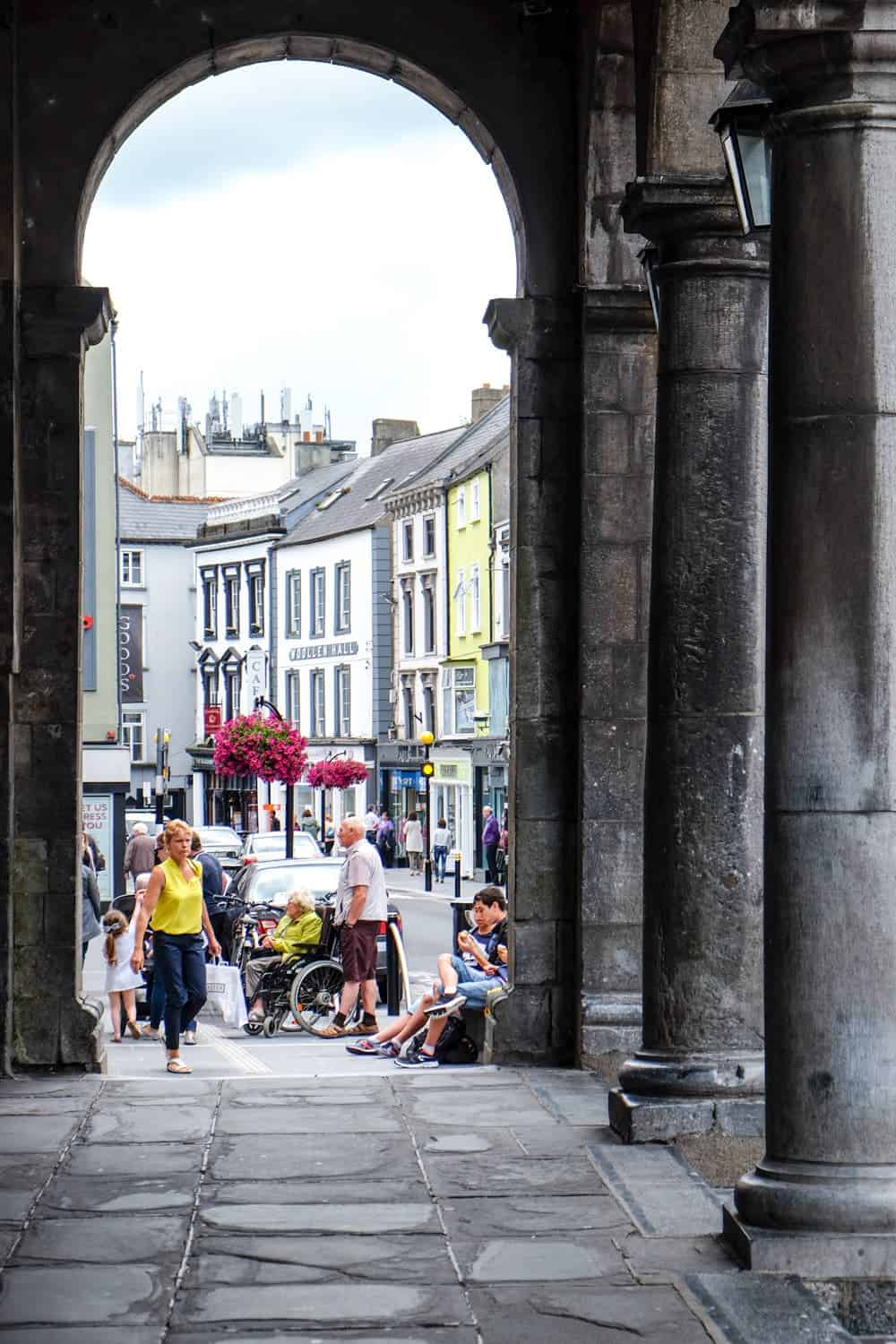 Visit the Oldest Inn in Kilkenny

Disclaimer: This post contains affiliate links to handpicked partners, including tours, gear and booking sites. If you click through or buy something via one of them, I may receive a small commission. This is at no extra cost to you and allows this site to keep running.
Dublin to Waterford: 2 hours and 40 minutes. 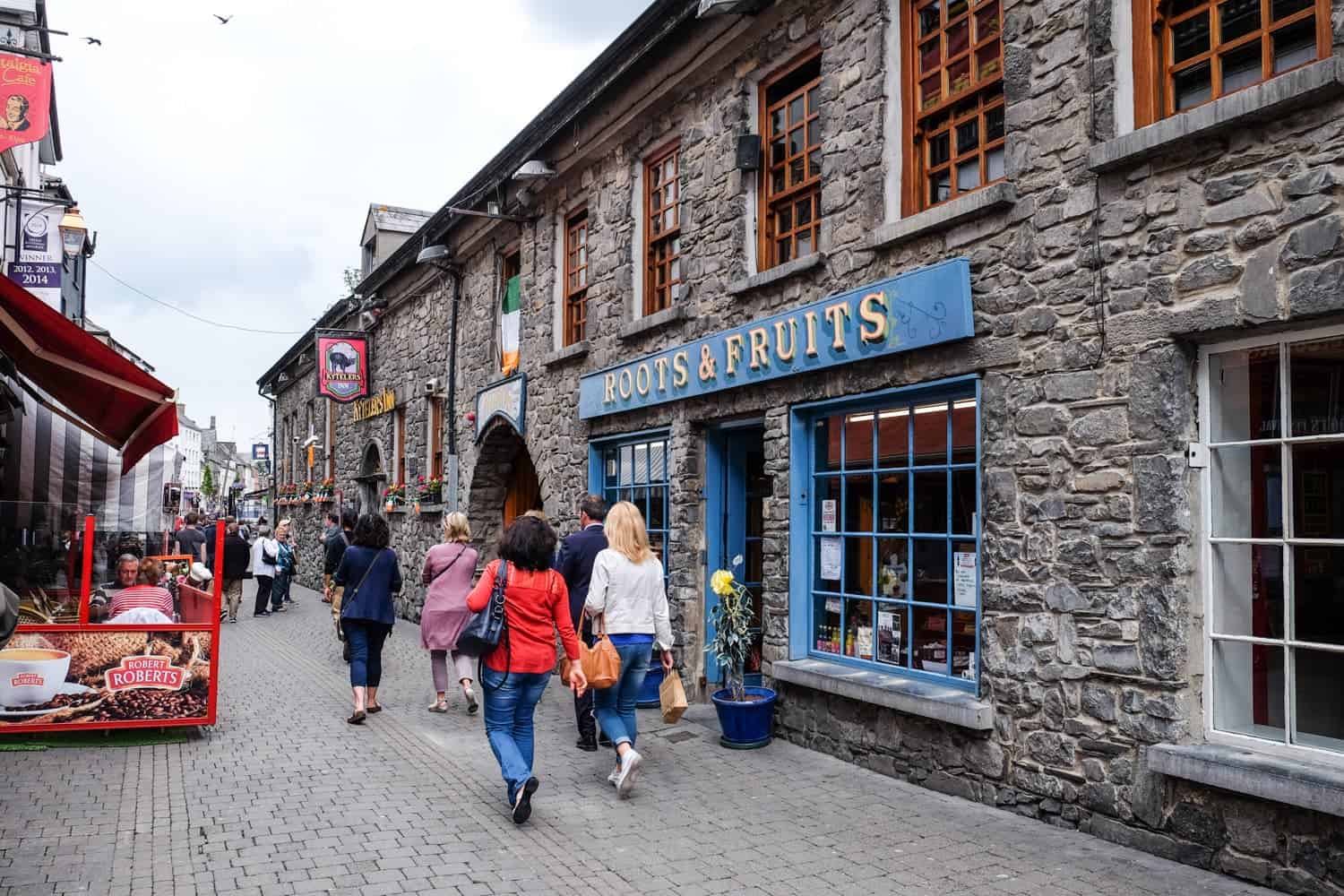 The old houses of the Medieval Mile in Kilkenny
Today it stands as a city of nine churches, two cathedrals, and up to 70 pubs for its 30,000 inhabitants and guests.
Even more recent historical buildings such as 16th-century merchants houses can be found intact behind the 18th and 19th-century buildings, like The Hole In The Wall music venue – the oldest surviving townhouse in Ireland from 1582 where you could once have ‘got drunk for a penny’.

If you are not on a self-drive route, you can plan and book rail and bus tickets on the Transport for Ireland (TFI) site.

Walking the Medieval Mile means being able to backtrack in years by the thousands.
READ MORE: On the Waterford Viking Triangle – Visiting The Oldest City of Ireland

Smithwicks Brewery is a traditional experience in Kilkenny
Want more local insight? Walking tours of Kilkenny’s Medieval Mile are available as part of the offering from the Kilkenny Tourist Office. Pat Tynan has been guiding visitors around Kilkenny for the past 30 years and touches upon a dozen great sites in the city.
Kilkenny’s famous Butterslip Lane

The most frequent and direct service is the number 736 Kenneally’s Bus Service.
Dublin to Kilkenny: 2 hours – 2 hours and 30 minutes
The Kyteler family arrived with the Normans, where the money lending ways of the banker, Joseph Kyteler didn’t go down too well with the teachings of the church. When he died, his daughter Alice took over, marrying four wealthy men who all died under mysterious circumstances. Accused of heresy and witchcraft, she fled to England, and it was her maid (on trial as an accomplice) who was burnt at the stake.
Pop into the Kytelers Inn in Kilkenny for a pint and some ghost stories

Between Waterford and Kilkenny

Kilkenny underwent heavy restoration from the 1960s to preserve its ancient legacy. Buildings were restored and re-opened, the city was granted ownership of the Castle and opened to the public for the first time in 1976, unsightly neon signs were removed, and small shops retained.
Though it started life in the 6th century as a monastic settlement, it was with the arrival of the Normans in the 12th that it grew. It became a walled town of seven gates, with a castle to the south and a cathedral to the north.

Viking strongholds and medieval capitals are not built over in the south of Ireland’s Ancient East but are used as a means of living history – ceremonious historical gateways of the early urbanisation that made cities like Kilkenny what they are today.
And to the Smithwicks brewing house takes you on an interactive experience to the 1300s where the monks of St. Francis Abbey where Irish beer was born.
The Kilkenny River Court Hotel is one of the bestsellers and in a top location. On the banks of the River Nore, you may even be lucky and get a room that looks out over the grounds of Kilkenny Castle. Stylishly decorated with a traditional touch this hotel in Kilkenny is set in a quiet location but in close distance to the main sightseeing and entertainment areas in the centre of the city.
Kilkenny to Dublin: Approximately 2 hours.

To Kilkenny Castle, built upon what was a 12th Century Castle erected by the Norman invader, Strongbow, whose son-in-law (William Marshall) built the fortified structure that remains a centrepiece of the city.

Where to Stay in Kilkenny 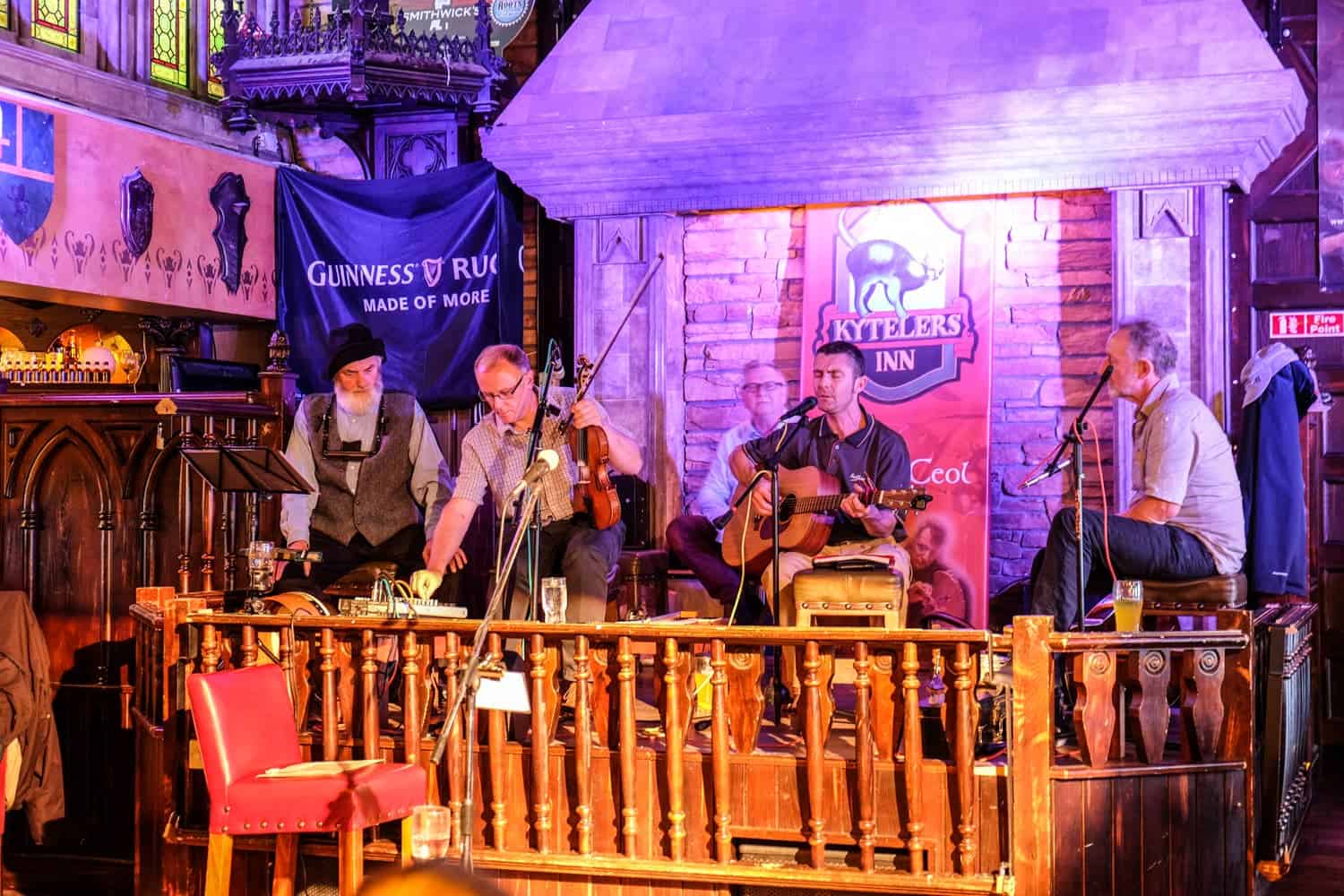 You can visit the 13th Century built Kyteler’s Inn and join the merriment of live music, and dare yourself to venture into the dark corners of the stone-walled rooms, where it is said Alice sometimes watches over to make sure her Inn is running to order.
Walking through Butterslip Lane

Things to Know About the Medieval Cities of Ireland

In European history, the Middle Ages or medieval period lasted from the 5th to the 15th century. Wander through 5,000 years of history as I did by travelling around the southeast region of Ireland. My trip was in conjunction with Ireland Tourism as part of a campaign to bring the country’s centuries-old history to life. 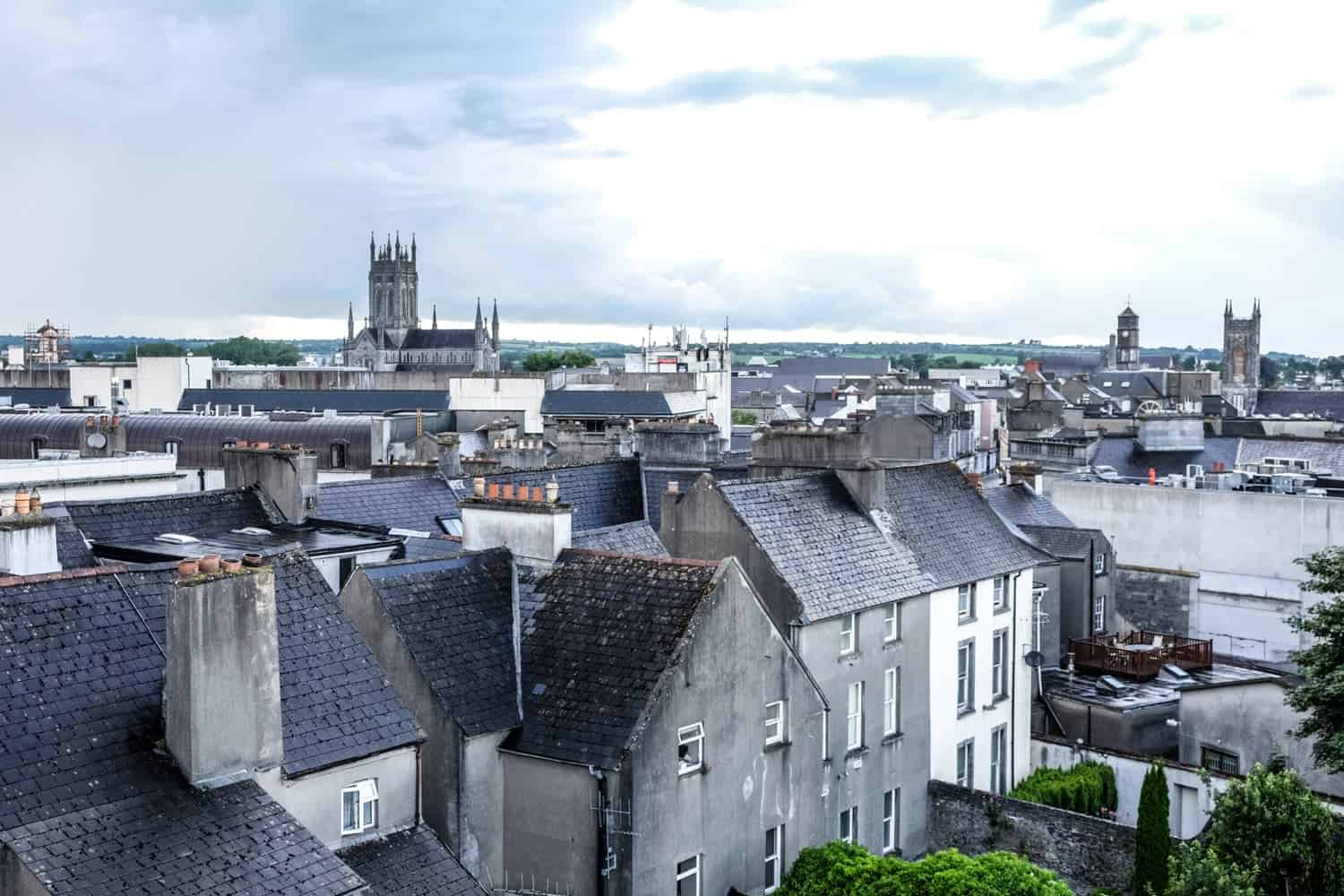 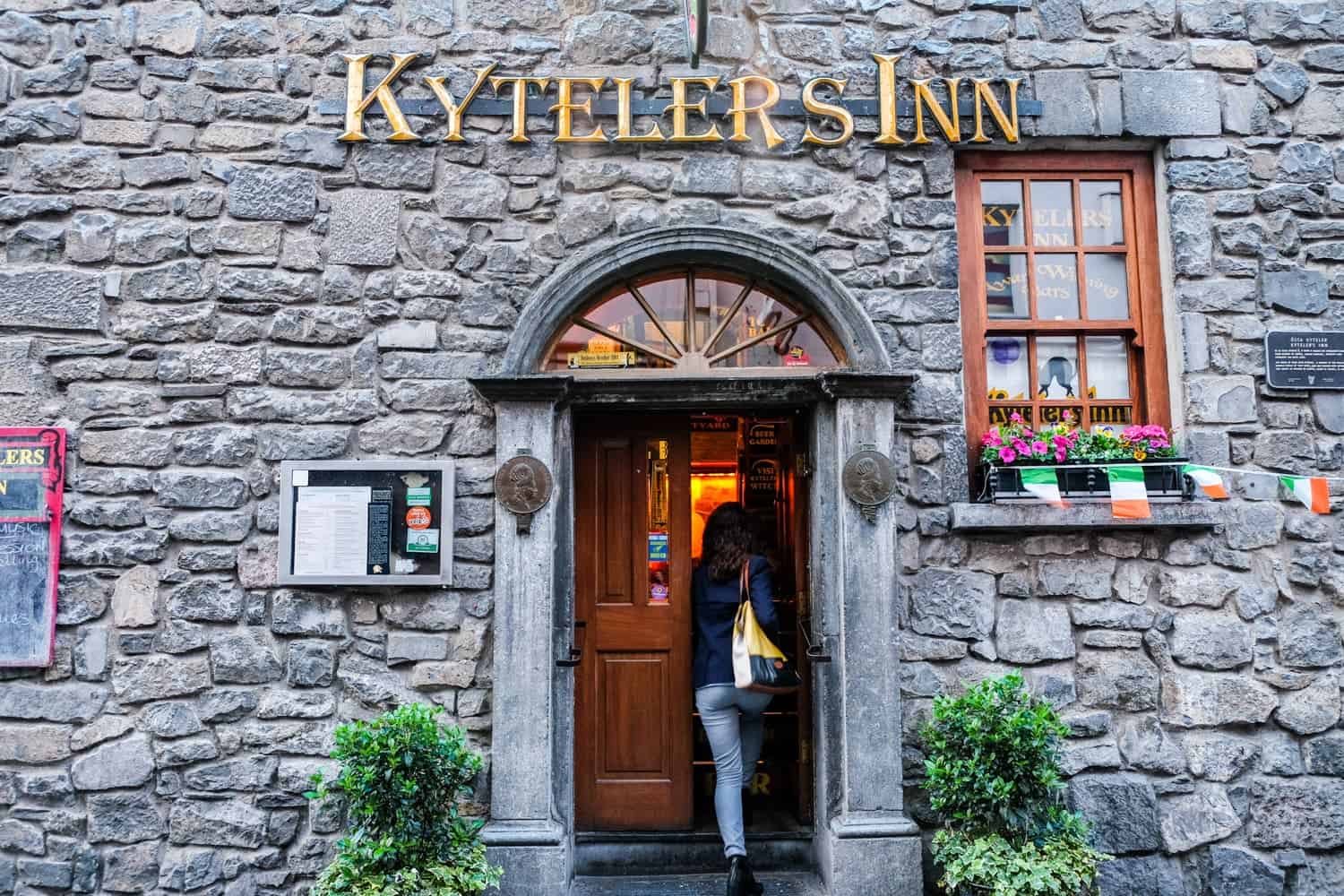