Skip to content
The castle-like Ajafería Palace in Zaragoza.

Street art in Zaragoza is helping to revive forgotten neighbourhoods.
Here’s why you should schedule the extra stop when travelling the popular Spain train route and experience what it feels like to stumble upon a Spanish secret.
Disclaimer: This post contains affiliate links to handpicked partners, including tours, gear and booking sites. If you click through or buy something via one of them, I may receive a small commission. This is at no extra cost to you and allows this site to keep running. 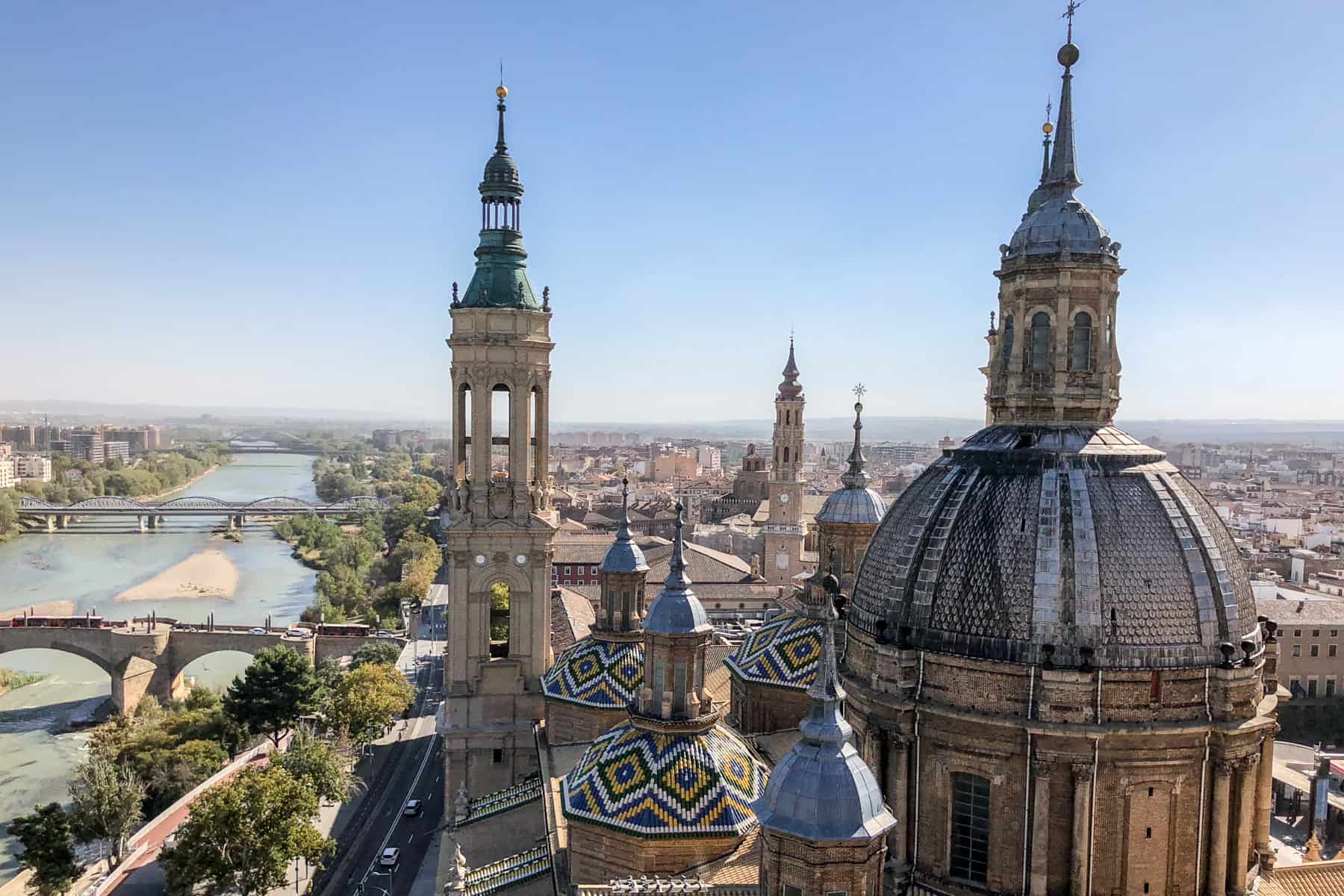 All the Things to do in Zaragoza

Zaragoza is synonymous with gastronomic, cultural expression. Much like art, people reinvent old recipes and add modern twists to traditional establishments and food customs. So where’s the best place to eat in Zaragoza?
El Salvador Cathedral was built upon the site and structure of the main mosque of the old Muslim city. Today, Mudejar design can be found on the outer wall of the parish chapel, and the Church of Mary Magdalen is Mudejar in style with a tower and intricately patterned tiles. 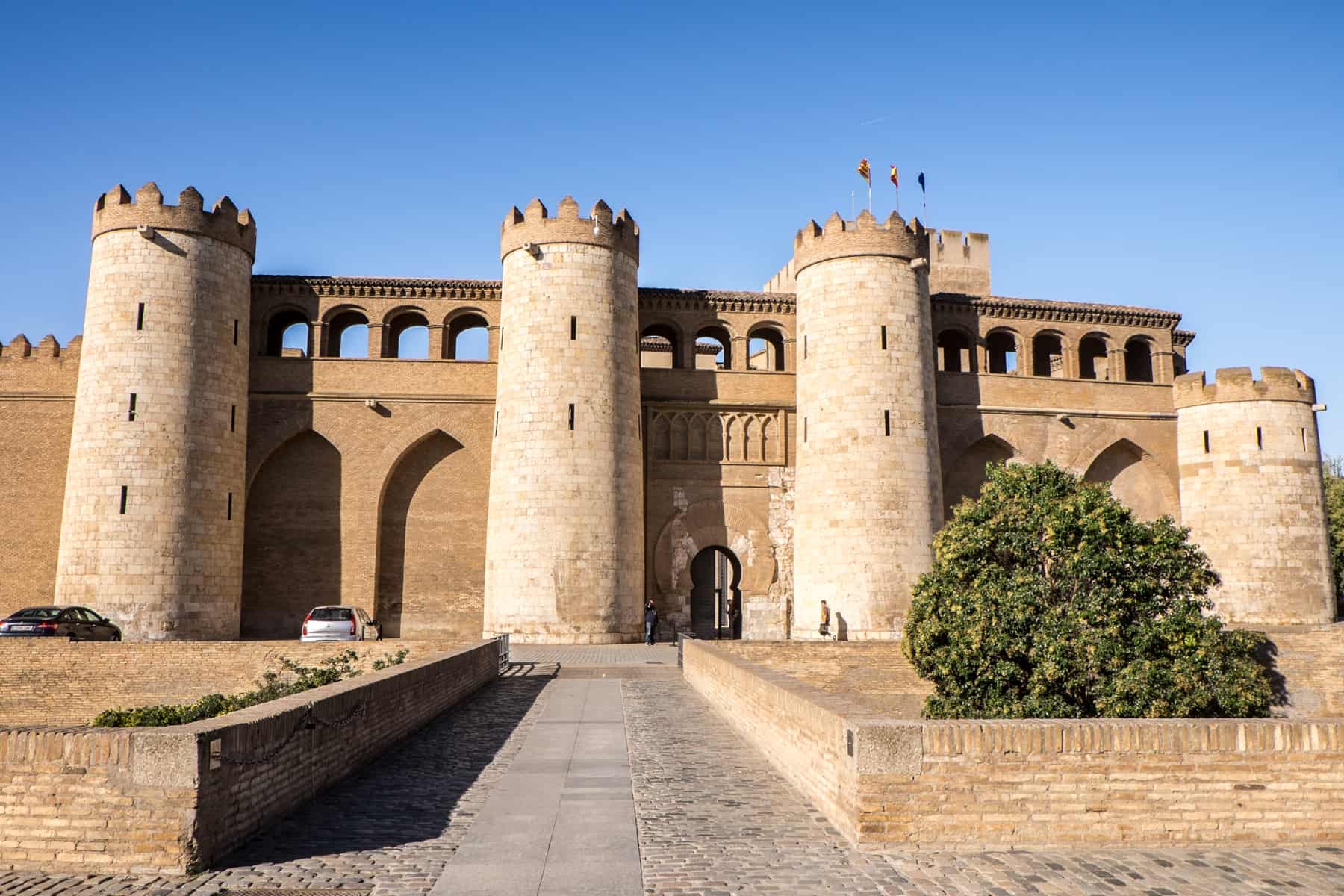 Like most Roman cities, modern structures have covered many ancient remains, and Zaragoza is no exception. The construction of the San Pablo church replaced the old Roman hermitage of San Blas.

Still, there’s a lot of Roman Zaragoza on show. The Caesaraugusta Theatre Museum (Museo Del Teatro De Caesaraugusta) is one of the largest theatres of Roman Hispania that once held 6,000 spectators, and you can view ruins from a market at the Caesar Augustus Forum Museum. Even an 80-metre long section of the old Roman city walls stands crumbling in front of a modern apartment building.
Detailed artworks on tall apartment blocks in Zaragoza – part of the urban regeneration drive, of Festival Asalto 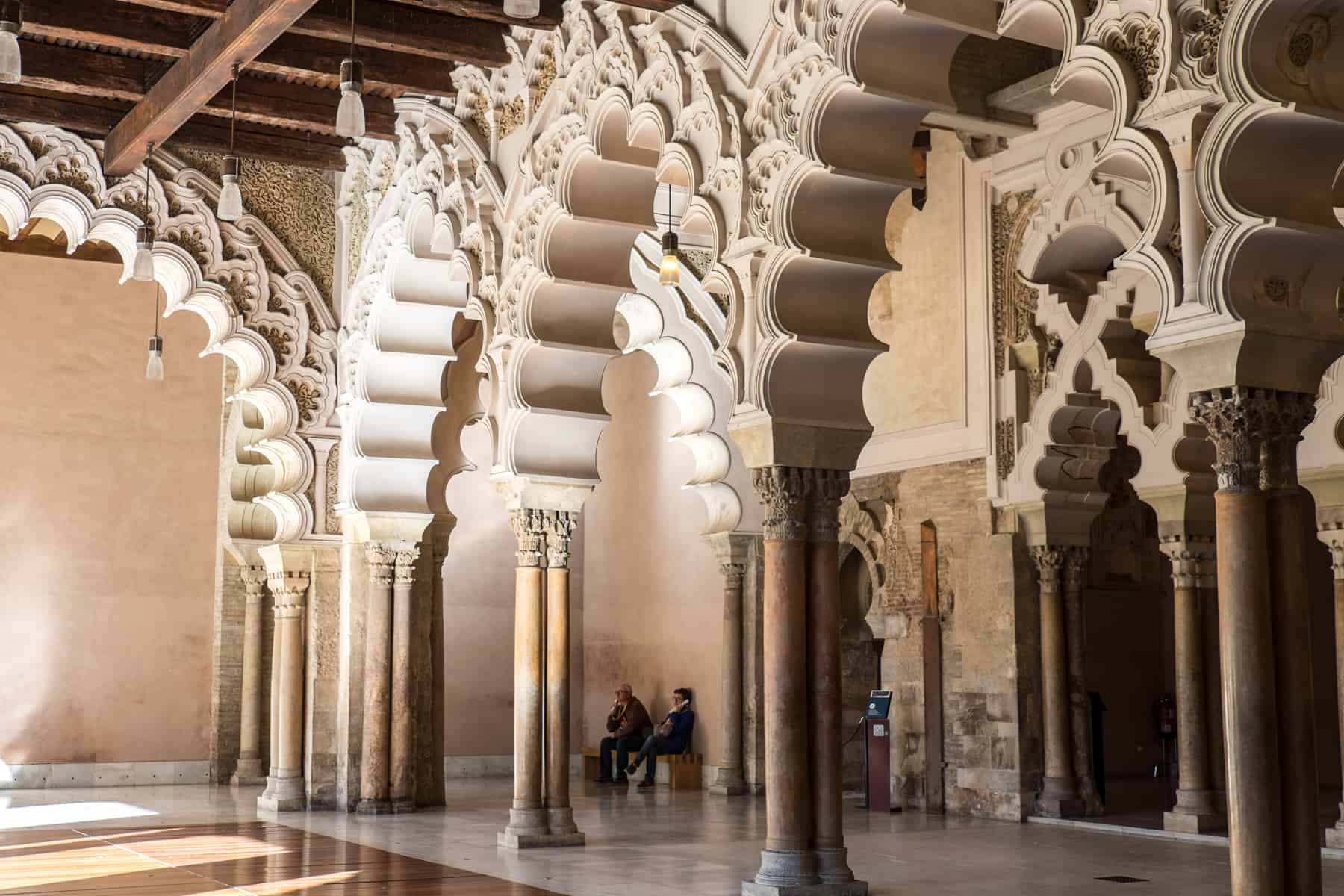 The ticket check before boarding a Renfe train in Spain.

Zaragoza’s oldest sweet shop, Fantoba which opened in Zaragoza in 1856.
Mudejar art on the Church of Mary Magdalen in Zaragoza.
The Alma del Ebro sculpture at Zaragoza Expo Zone 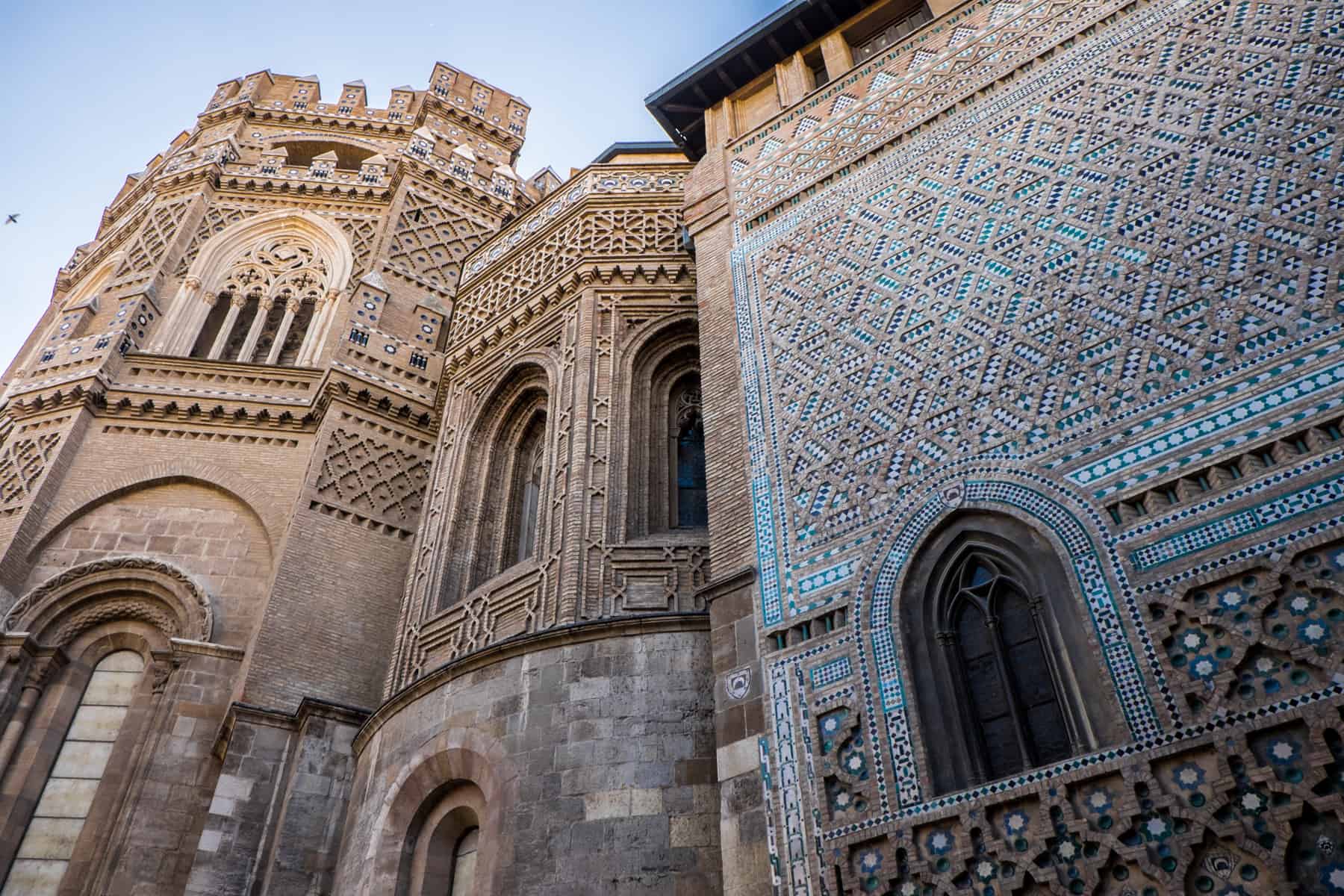 This 11th-century medieval Islamic palace remains one of the most beautiful and significant of all the sights in the city and the seat of the regional parliament. It’s an open museum of the residential structures of the Taifa kingdoms.

Climb the Cathedral-Basilica of Our Lady of the Pillar

Since its inception in 2005, the city has been filled with over 70 artworks using murals, graffiti, templates, posters and installations as the medium of expression by local artists and groups. You can embark on a self-guided walking tour to find them all using the handy online map (a printed version is also available). 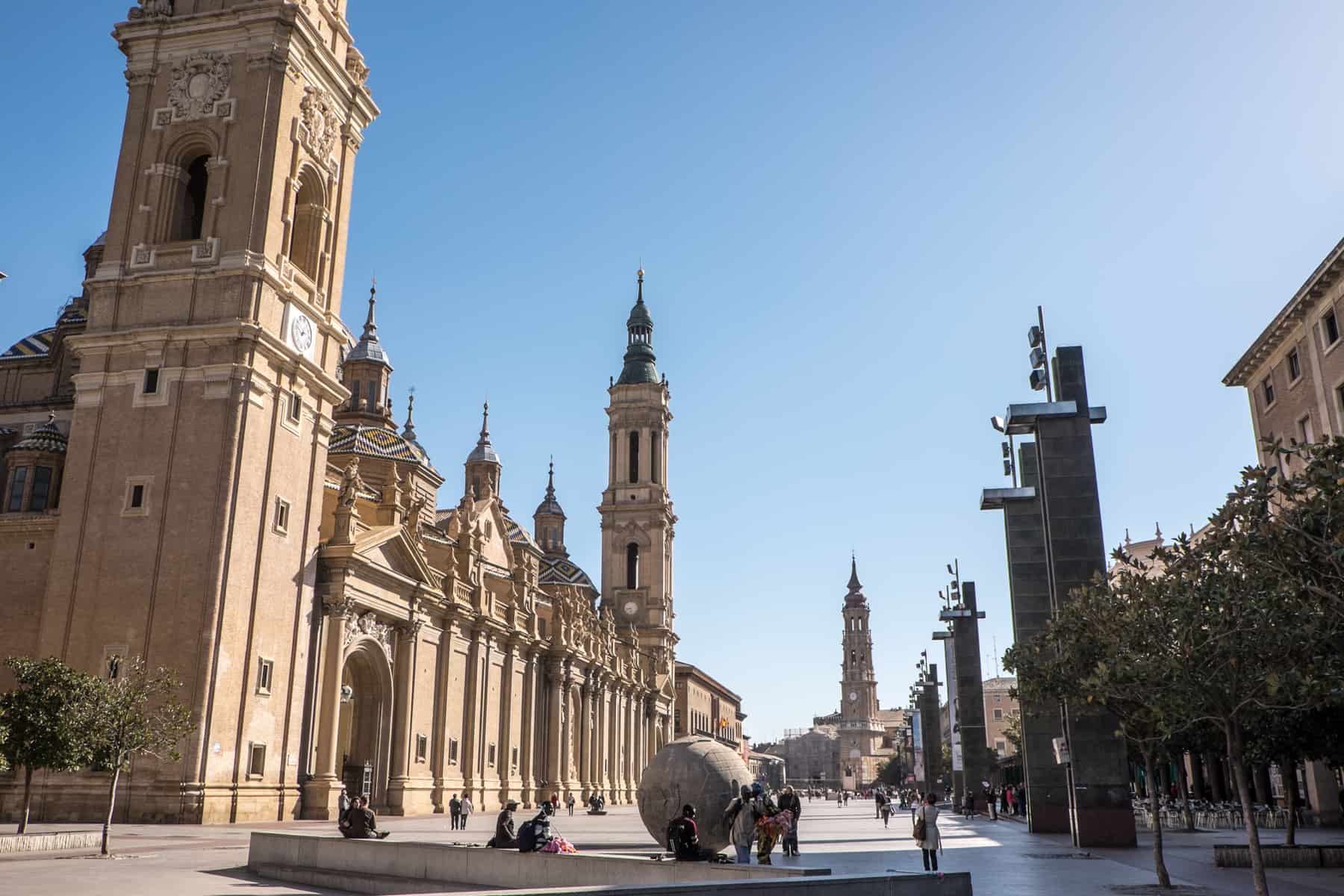 Wedged between Madrid and Barcelona is a city of an artistic legacy often overlooked. Here are all the things to do in Zaragoza city – the capital of mighty Aragon. 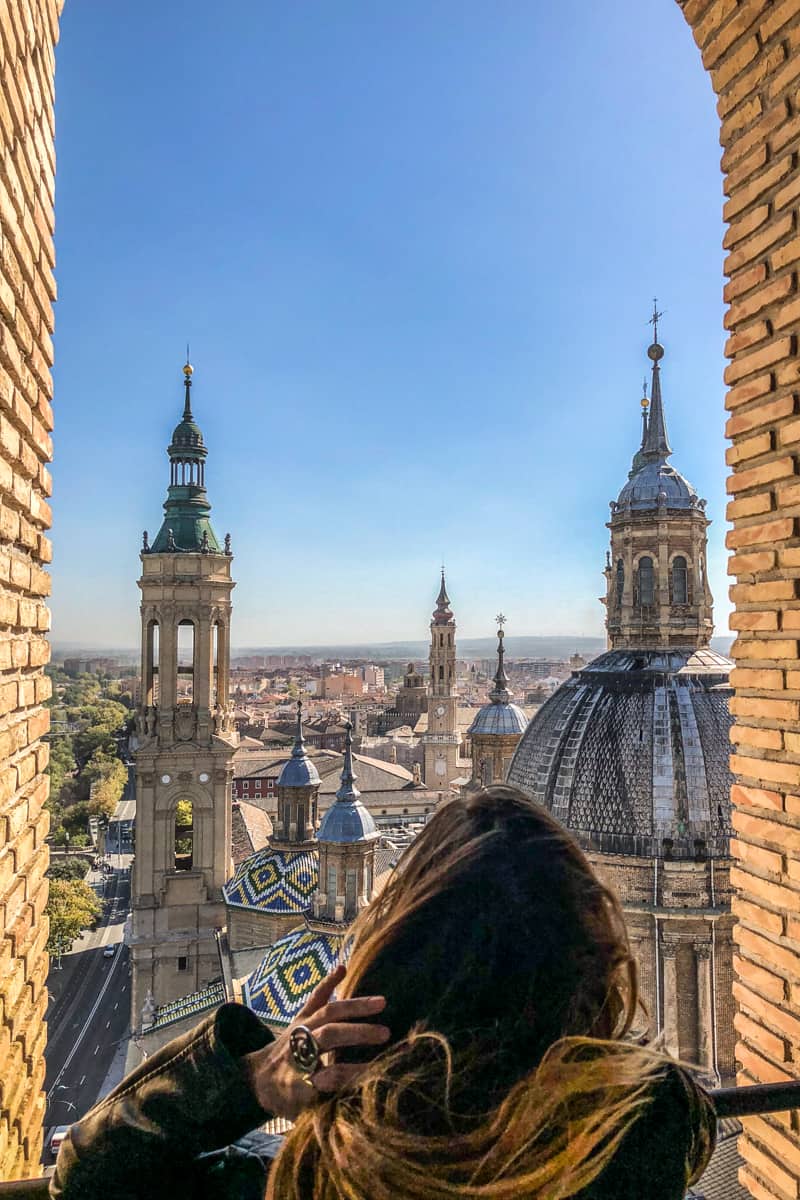 Plaza del Pilar is where you will find another of Zaragoza’s famed public artworks. Controversial but central to Aragon’s history, the Fuente de la Hispanidad fountain is shaped like the continent of Latin America. A reference to Columbus – amongst other symbols in the city – who monarch Ferdinand II of Aragon commissioned for the ‘discovery of the New World’.

Mixing old and new with artistic flair is very much a part of the food scene in Zaragoza. Here’s where you can sample the best of tradition. 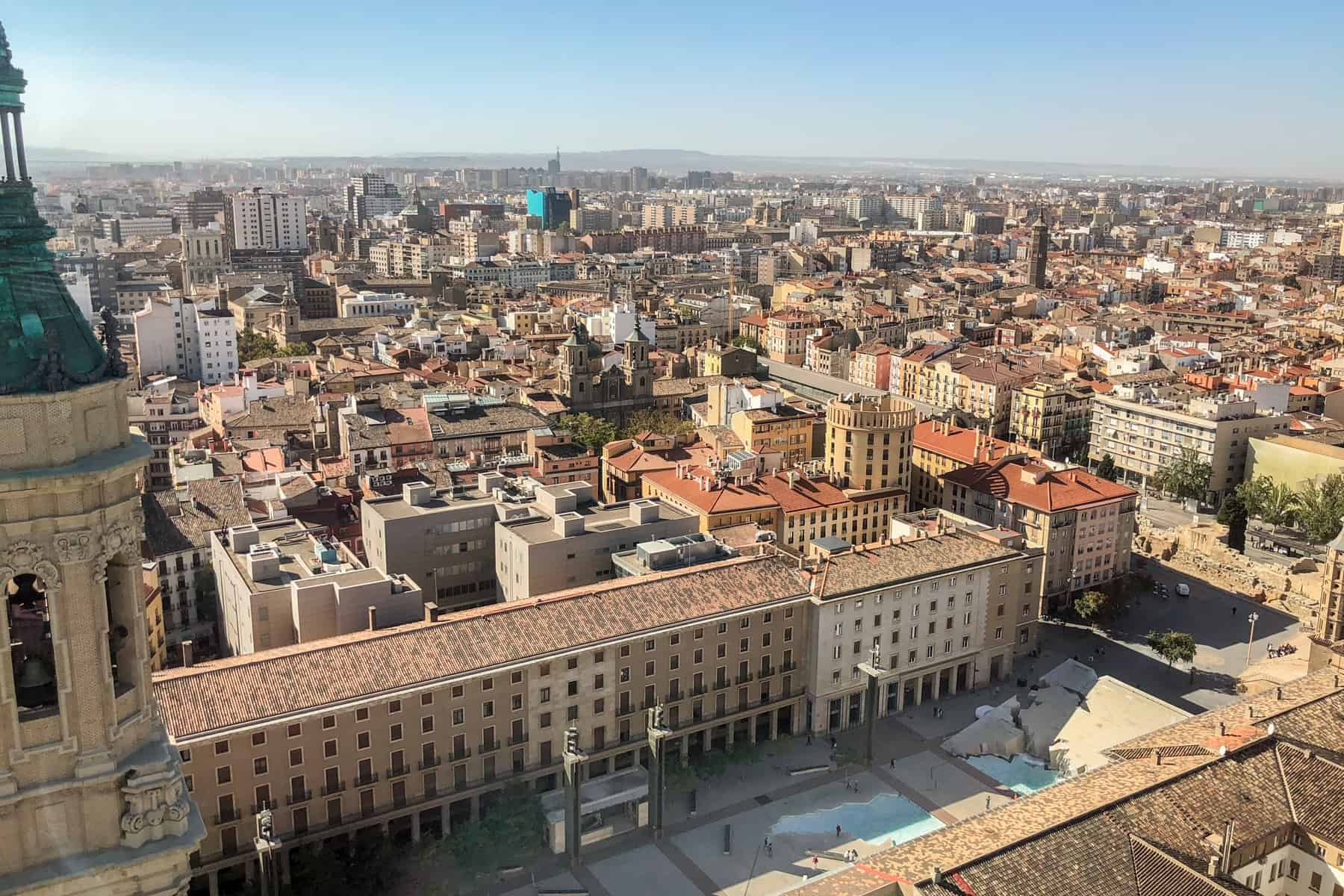 One of its defining features of Zaragoza is the stunning Cathedral-Basilica of Our Lady of the Pillar – a Roman Catholic Church in the heart of the Plaza del Pilar (the largest of all in Spain).

Part of the neverending indulgence of the Tapas Workshop at La Zarola.
I have a whole Spain by train AVE guide, with suggested routes and top tips for travelling around the country, but here are some quick fix tips for planning your rail adventure.
It provides one of the best-elevated views over the multi-domed dreamscape and a better perspective on the artistic Plaza del Pilar and its water features. 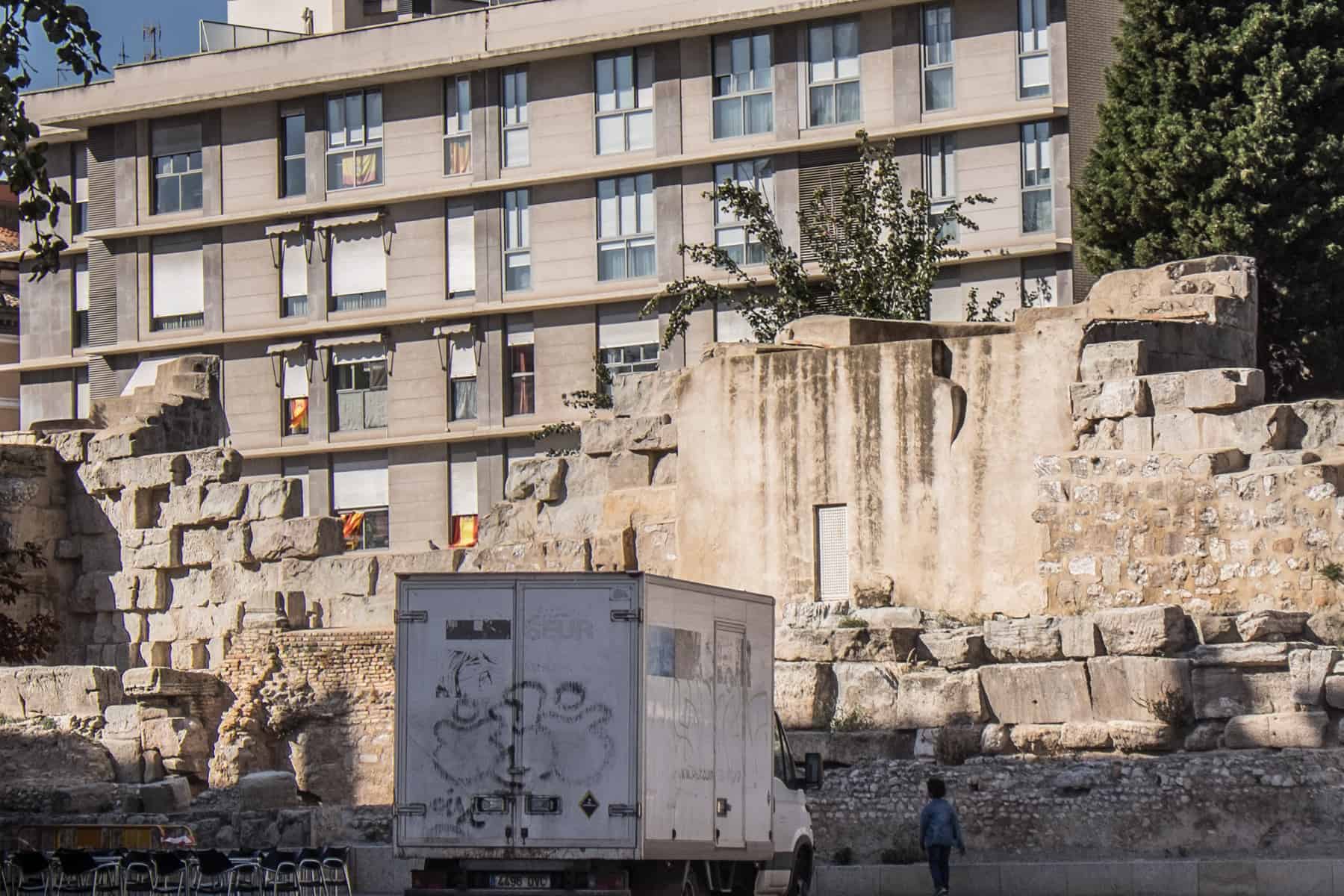 The Cathedral-Basilica of Our Lady of the Pillar lines the Plaza del Pilar.
By 1118, Ajafería became a Christian Palace and the residence of Aragonese monarchs, who added extra layers and extensions to the existing design, as did the Catholic monarchs with the Throne Room in 1492. 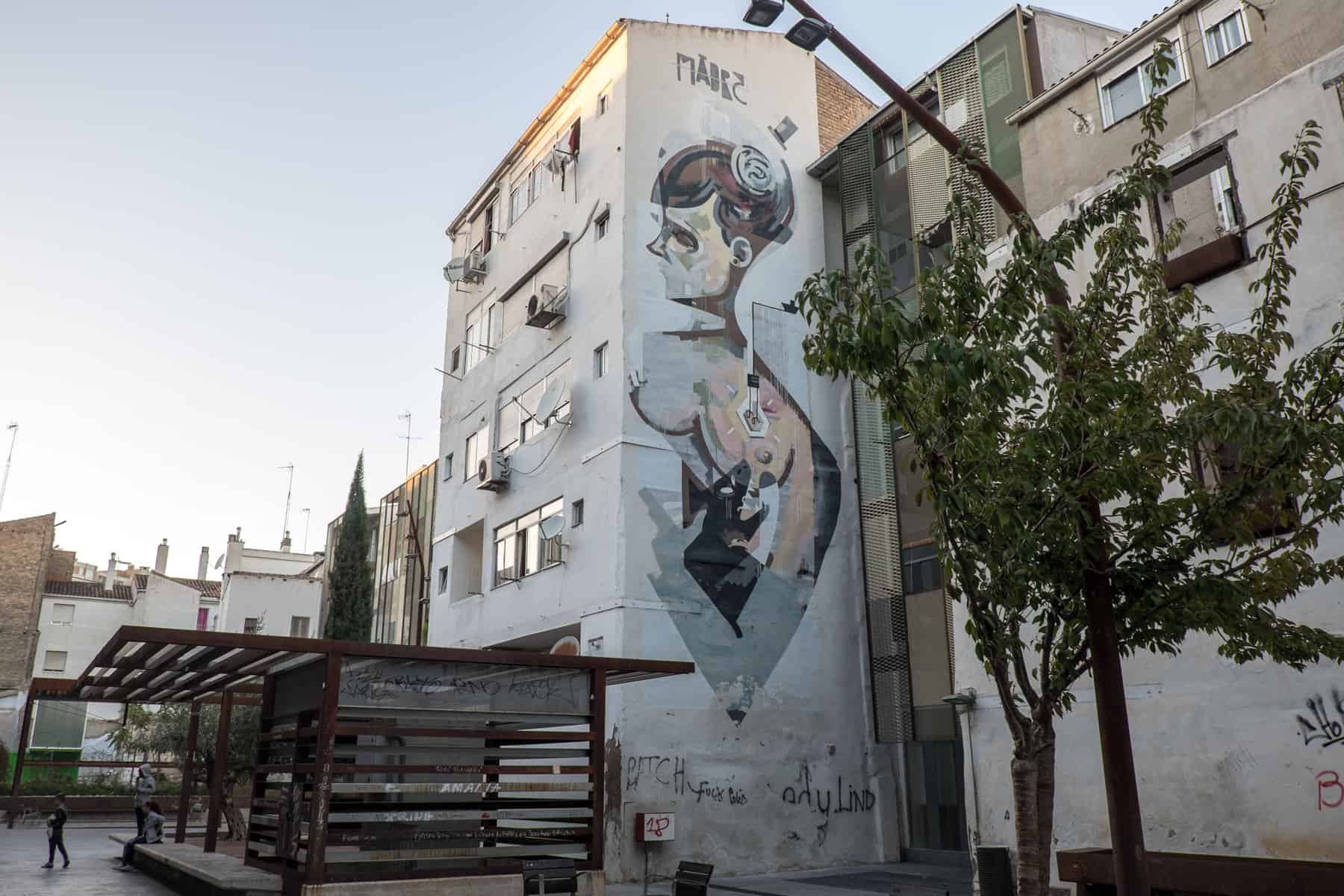 Zaragoza’s street art collection includes a Flamenco dancer on a building in a neighbourhood sports court. 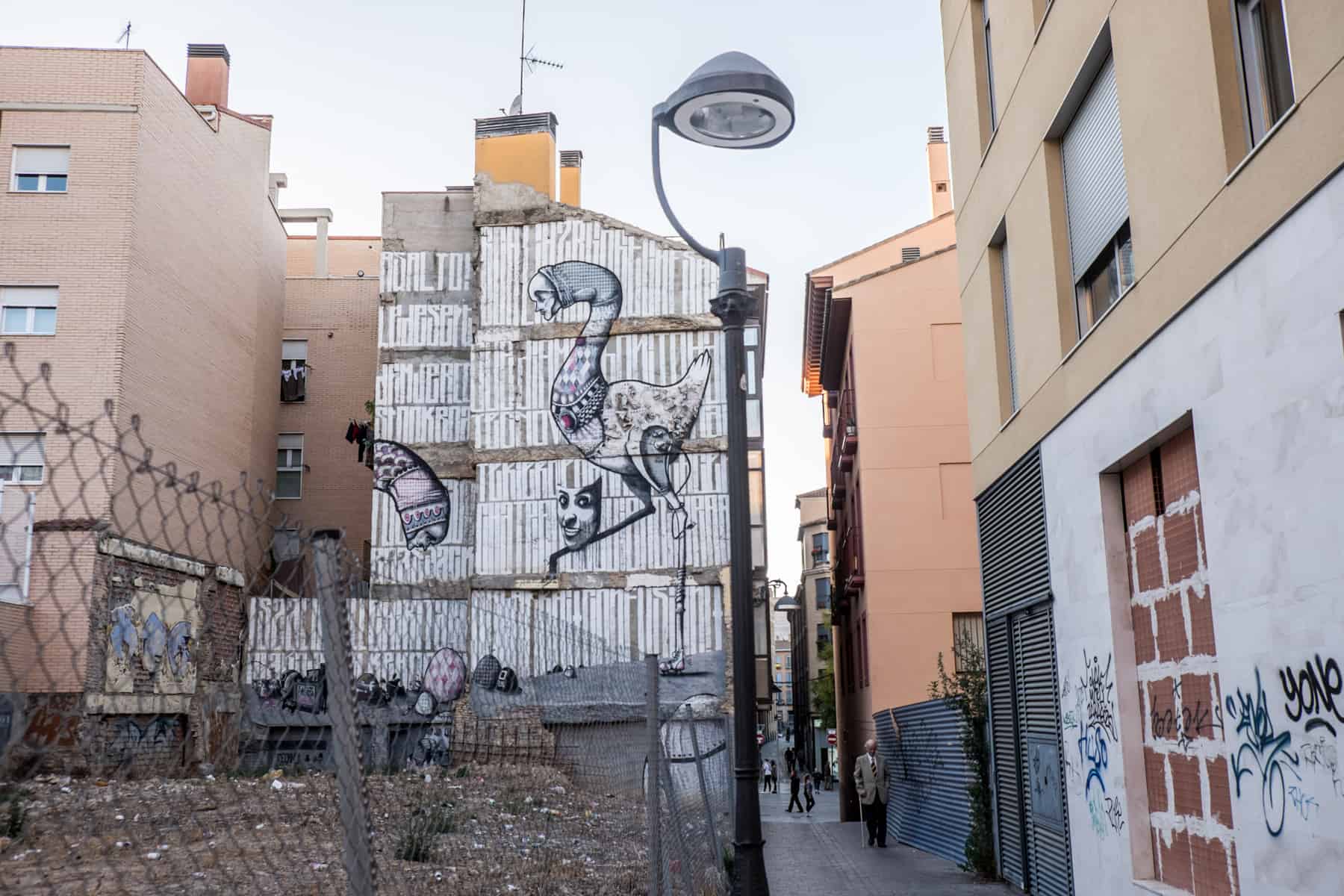 One of the best views of Zaragoza city from the top of the Cathedral-Basilica of Our Lady of the Pillar. 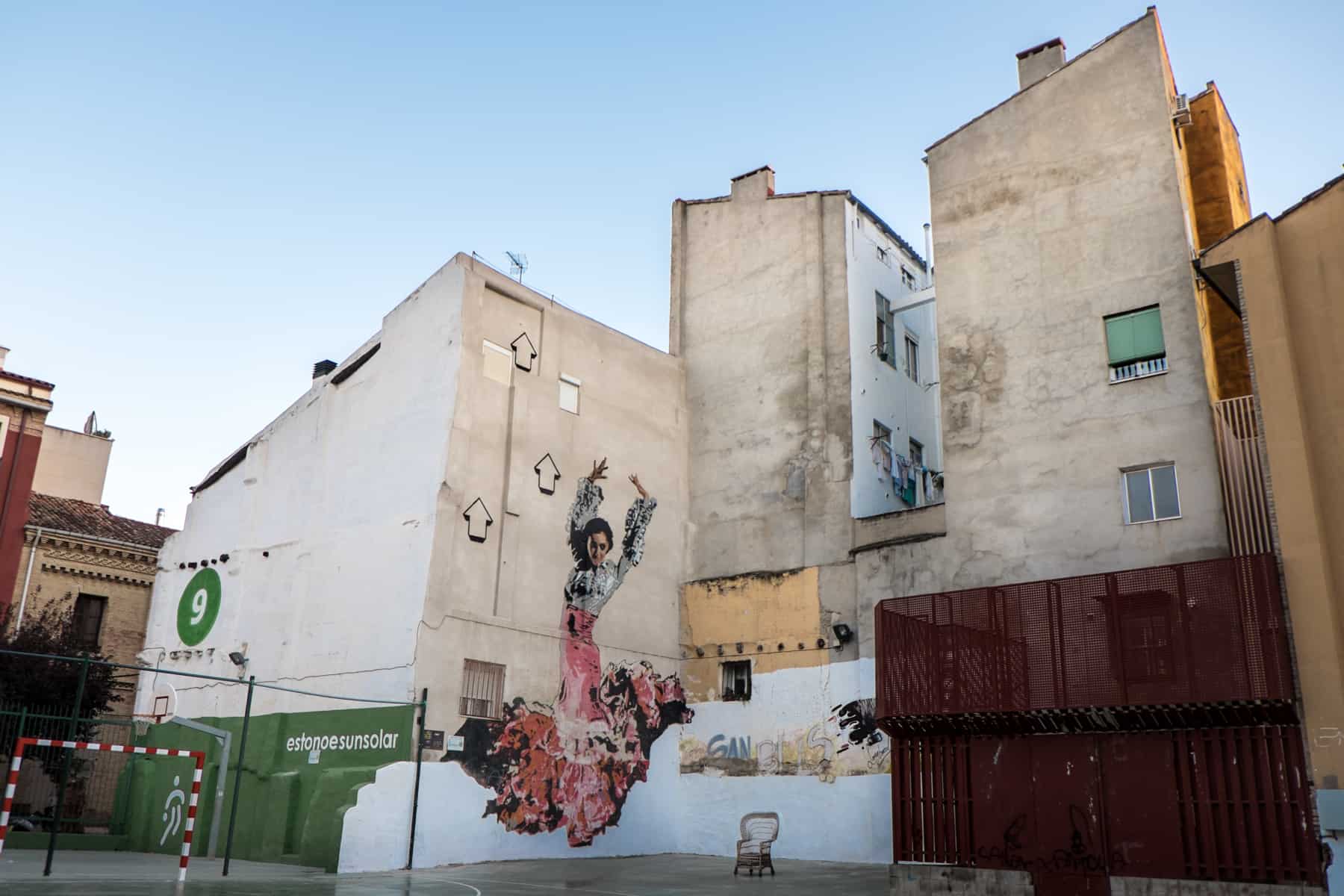 The master at work. Jamon carving by Félix Martínez at his restaurant, La Jamoneria. 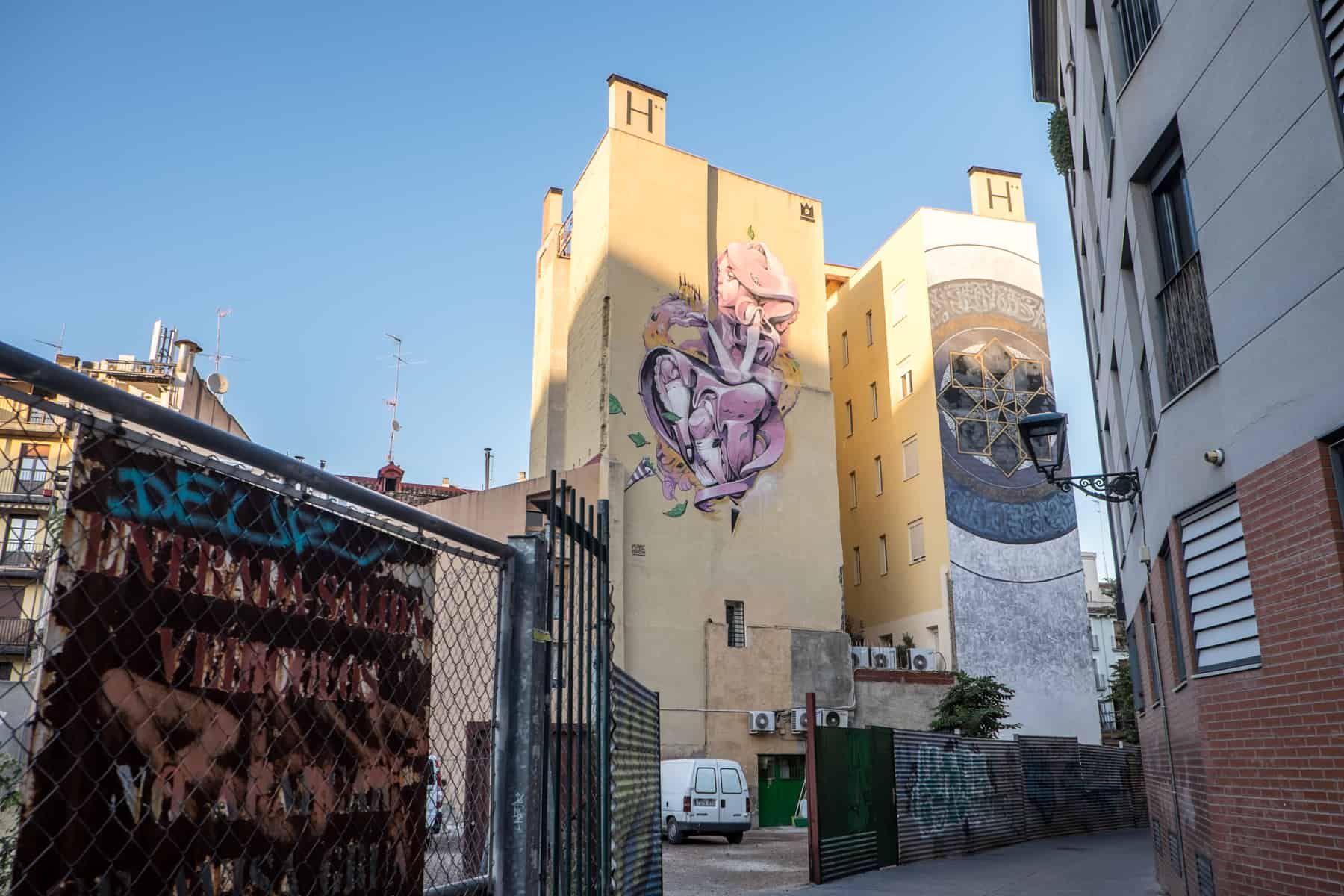 Zaragoza melds modern-day gritty and urban revival with its ancient and decadent architectural design heritage. The entire city is a showcase of its historical linage of art and expression. And when travellers bypass the chance of visiting Zaragoza on their journey between Madrid and Barcelona, they miss out on one of Spain’s most artistic and underrated cities.

A typical side street in Zaragoza’s El Tubo district is filled with the best places to eat and drink.
Zaragoza’s restaurant and culinary establishments pride themselves on local produce. The love for tapas lines every corner and alley, such as the El Tubo district known for attracting the hungry crowds and Plaza de Santa Marta for café culture. 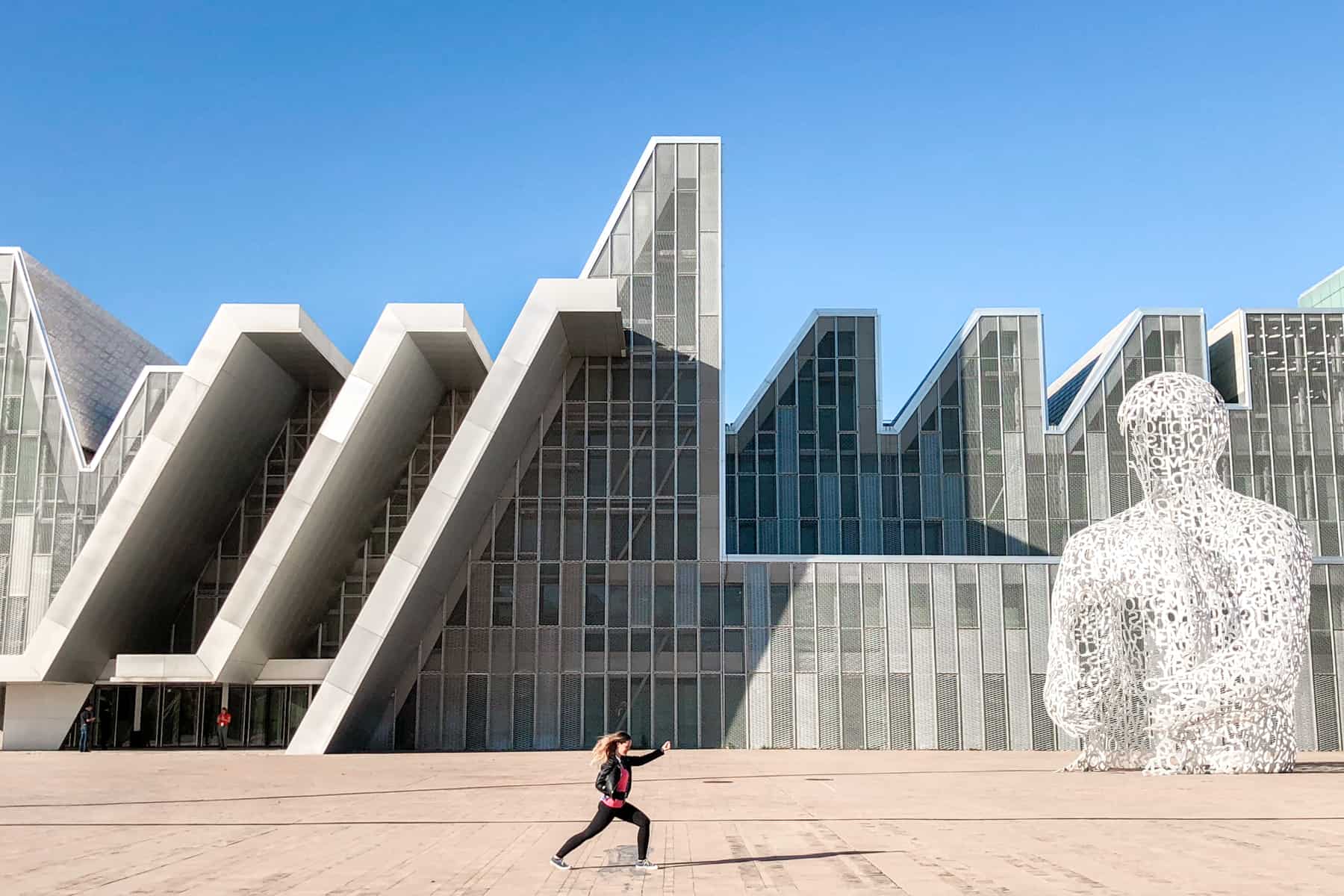 See how Zaragoza’s Roman past is interlaced with Mudejar art at the Lonja Market. Or find the Parish Church of San Gil Abad – a Romanesque temple destroyed in the 14th century to make way for the still-standing Mudejar church.

Visit the Goya Museum – The Artistic Son of Zaragoza

Beyond Ajafería Palace, you can still find Mudejar art details on historic structures around the city. 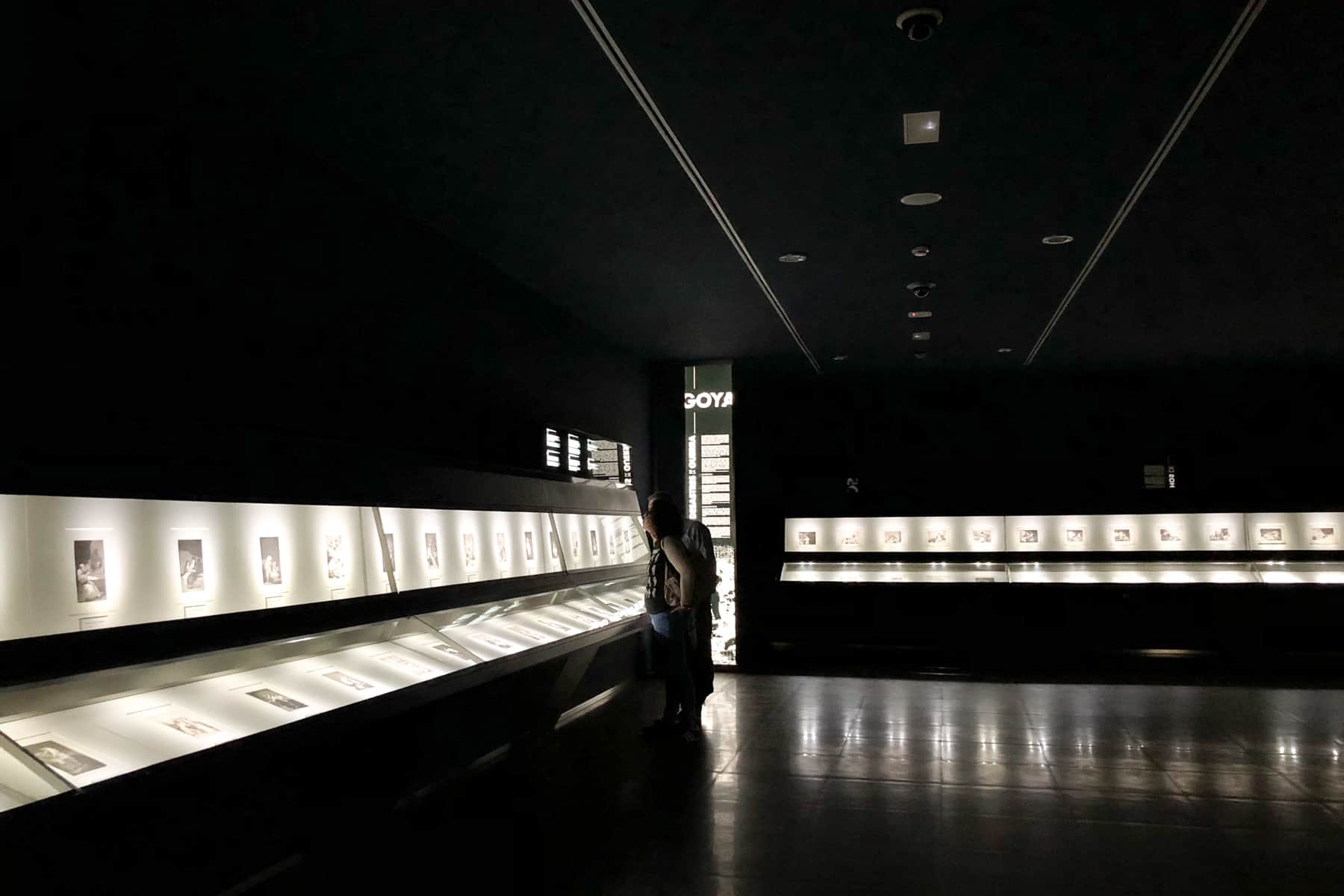 Modernisation into the fortress style we see today came in 1593. Each room is like a puzzle piece of this architectural timeline, and while it draws the crowds, it’s a place where you can easily get lost in its detail, most notably in one of the main halls with these mesmerising archways.

Eat Your Way Through Zaragoza

The modern Goya Museum in Zaragoza, creating a spotlight of his works.
Native to Aragon, Mudejar art blends Islamic and Christian elements from a time during the 12th and 17th centuries when both faiths coexisted. A core part of Zaragoza’s architectural heritage, the sheer amount of Mudejar art earned it a UNESCO World Heritage title, with the Ajafería Palace being the most symbolic. 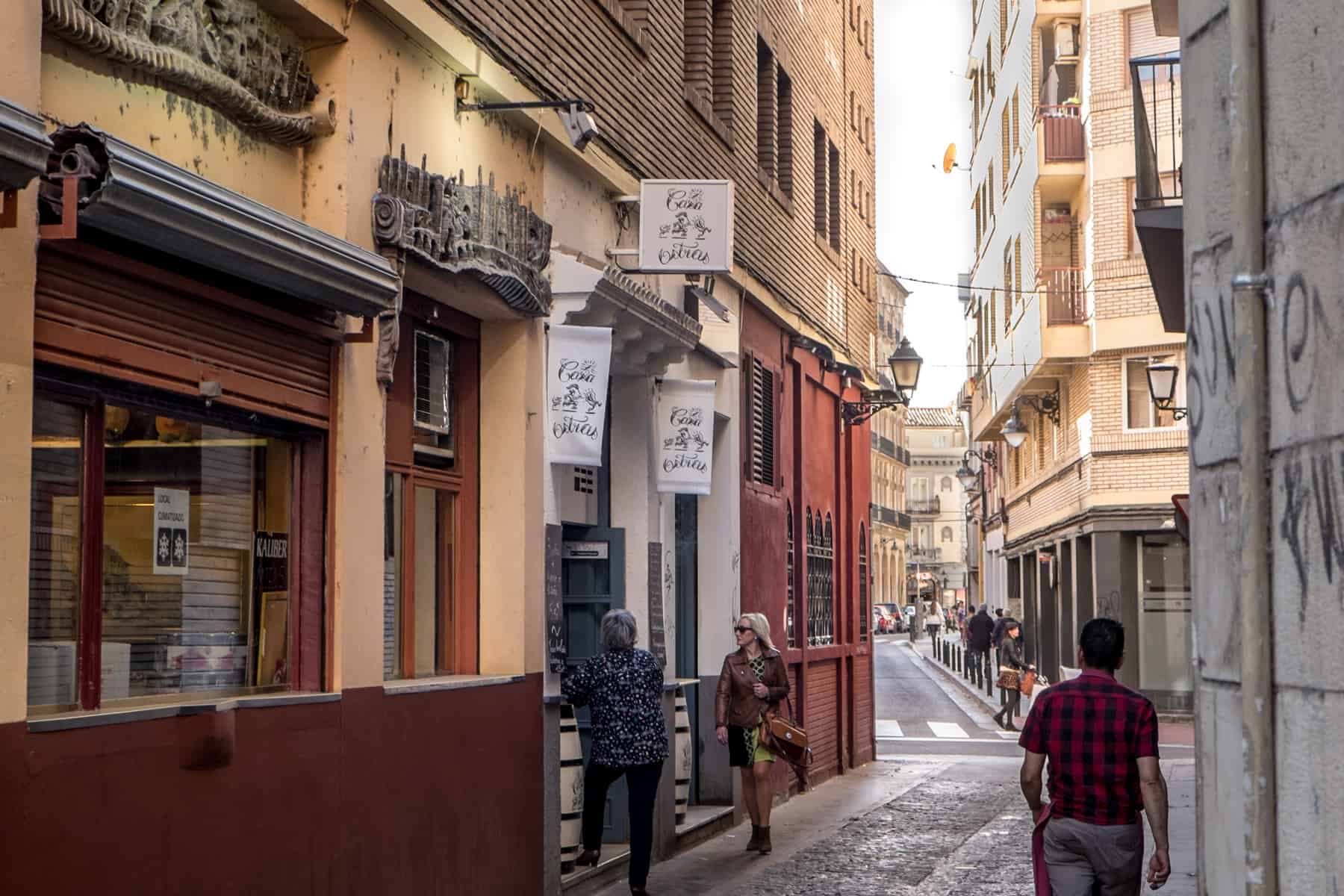 Remains of the Roman wall in Zaragoza city.

Street art in Zaragoza is reviving once run-down streets. 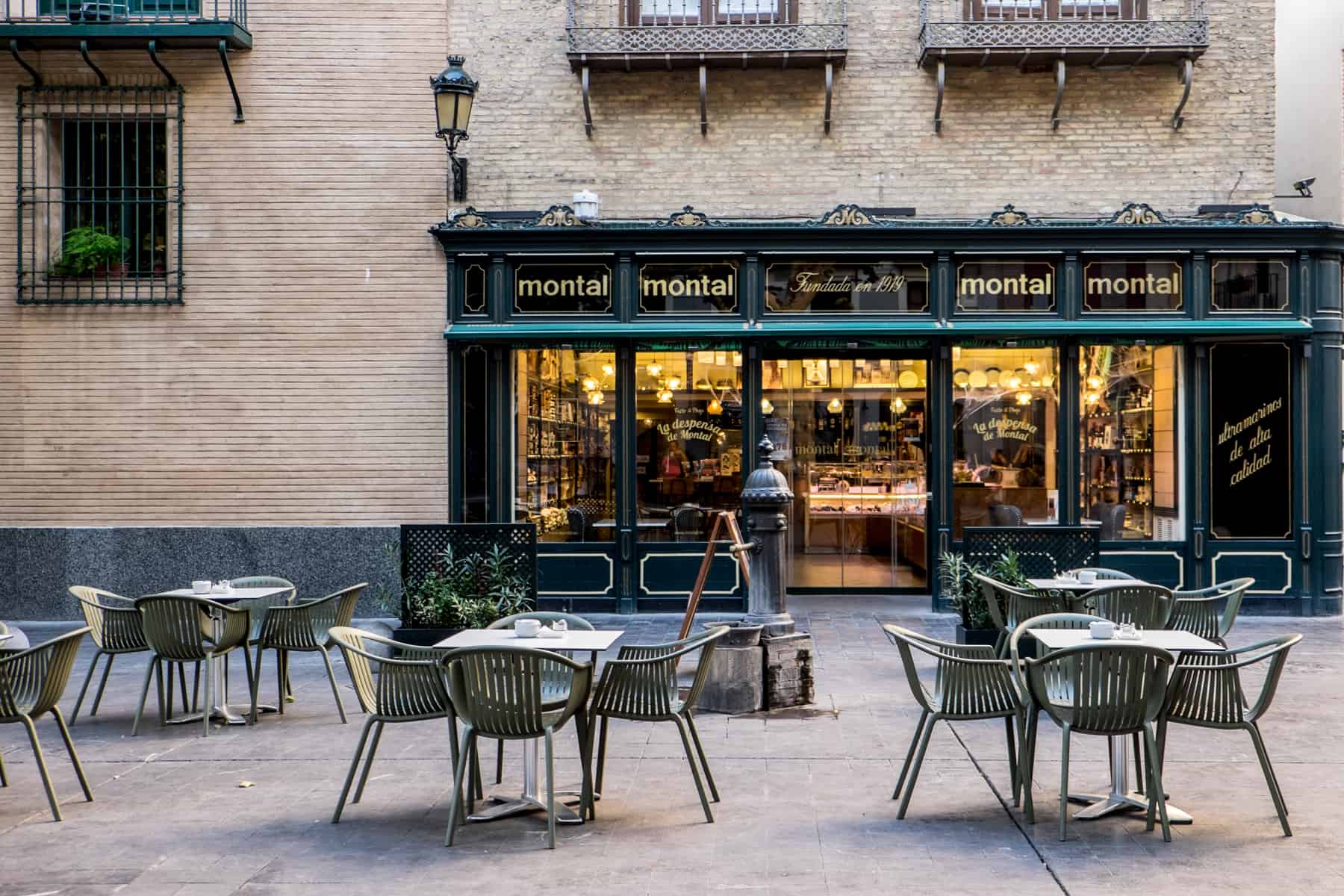 In the home of Goya, it’s no wonder that art plays a central role in the city’s persona. The dedicated Goya Museum (housed within the 16th-century Renaissance building, Calle Espoz y Mina 25) showcases works from the 15th to 20th century, with rooms dedicated to Goya’s self-portraits and etchings – the only museum which has the entire six series on display.

Food Workshops in Zaragoza – The Art of Cuisine

My two favourite designs are the Alma del Ebro sculpture outside the Congress Palace, which was made especially for this International Exhibition by Spanish sculptor Jaume Plensa and the Bridge Pavilion designed by British-Iraqi architect Zaha Hadid. 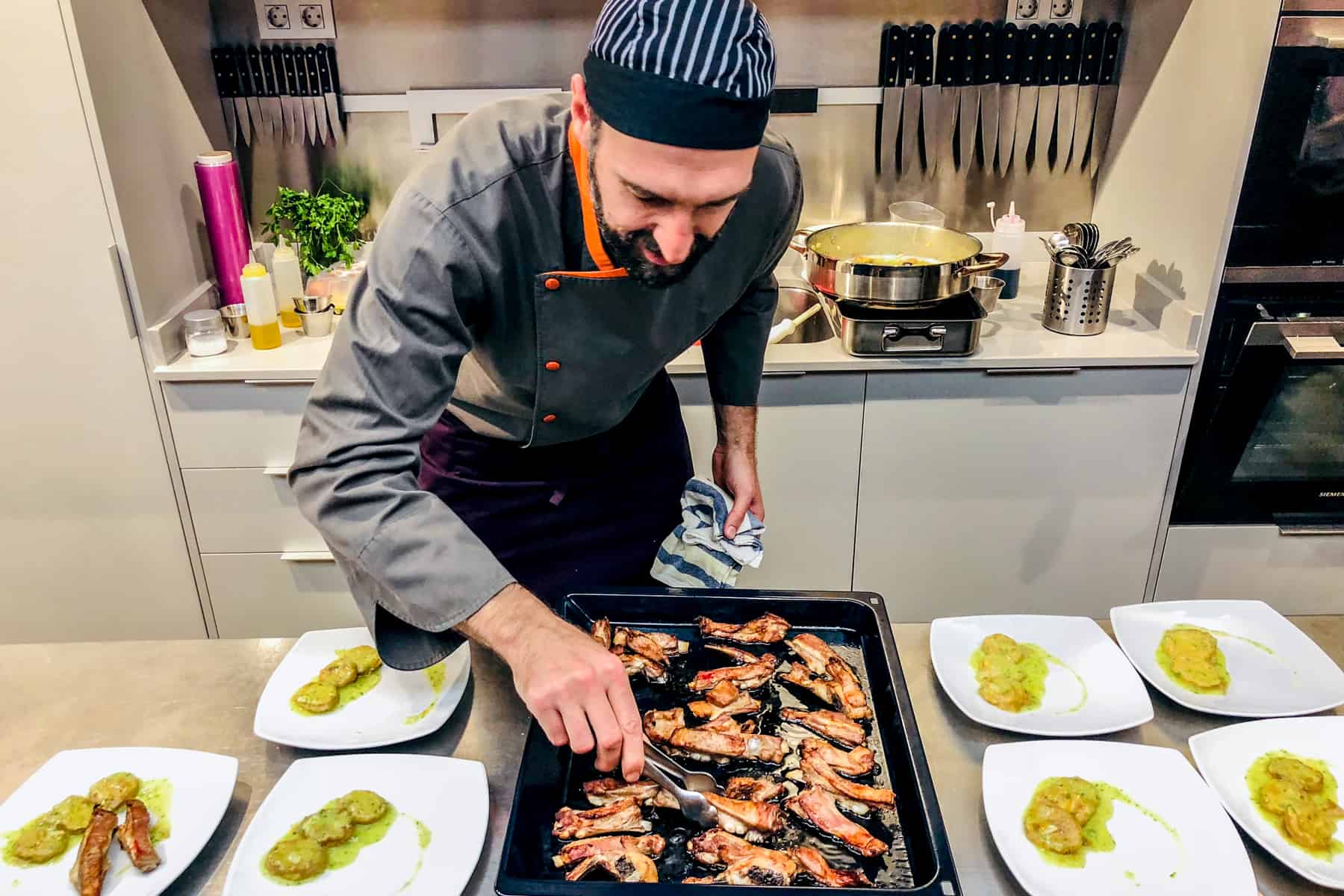 Zaragoza’s 2000-year-old Roman legacy is primarily found in the many archaeological museums, preserving a prominent layer of the city’s design. 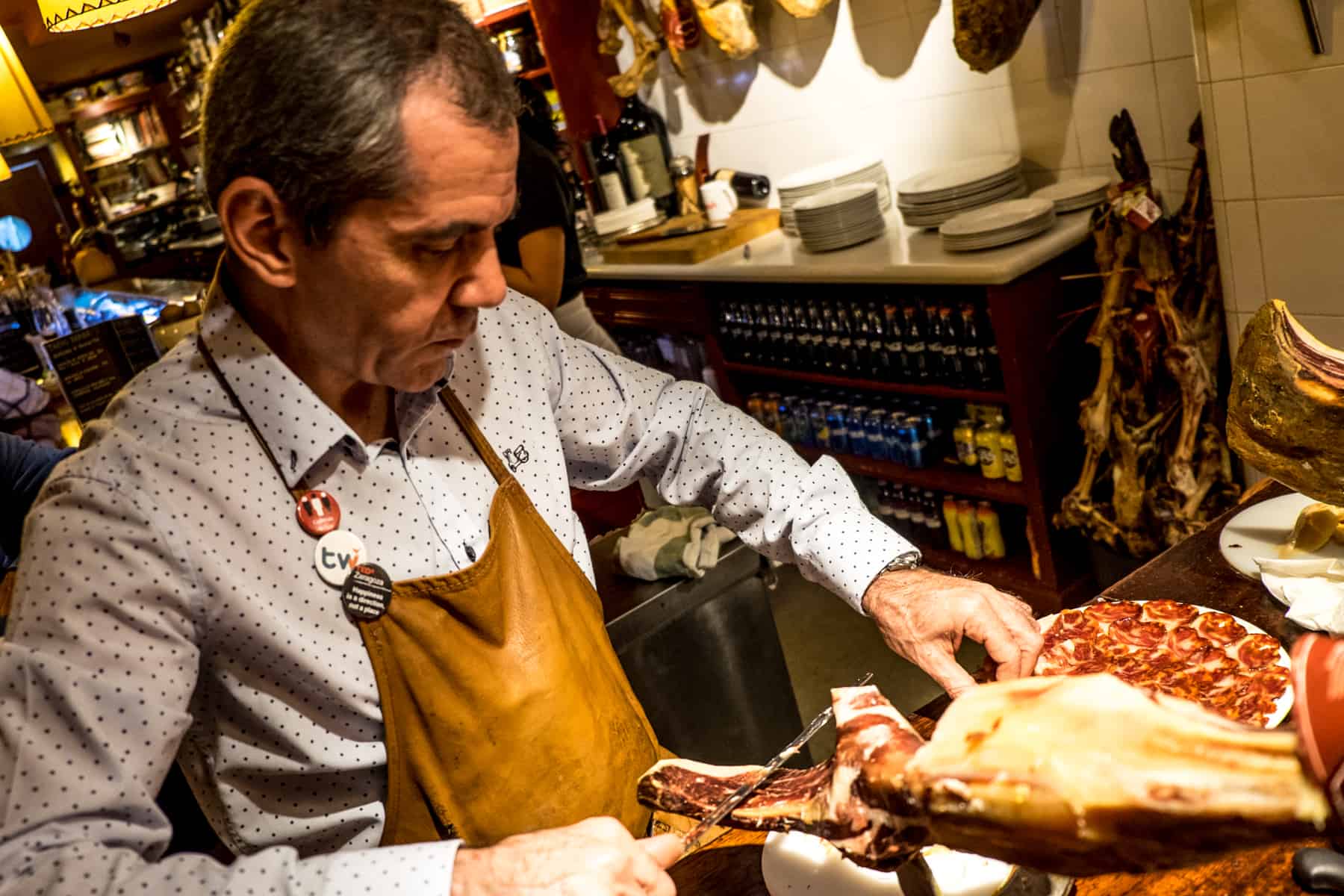 Space age-like modern architecture adds to the multi-layers of artistry here, which you can see showcased at the Zaragoza Expo Zone, constructed in 2008. 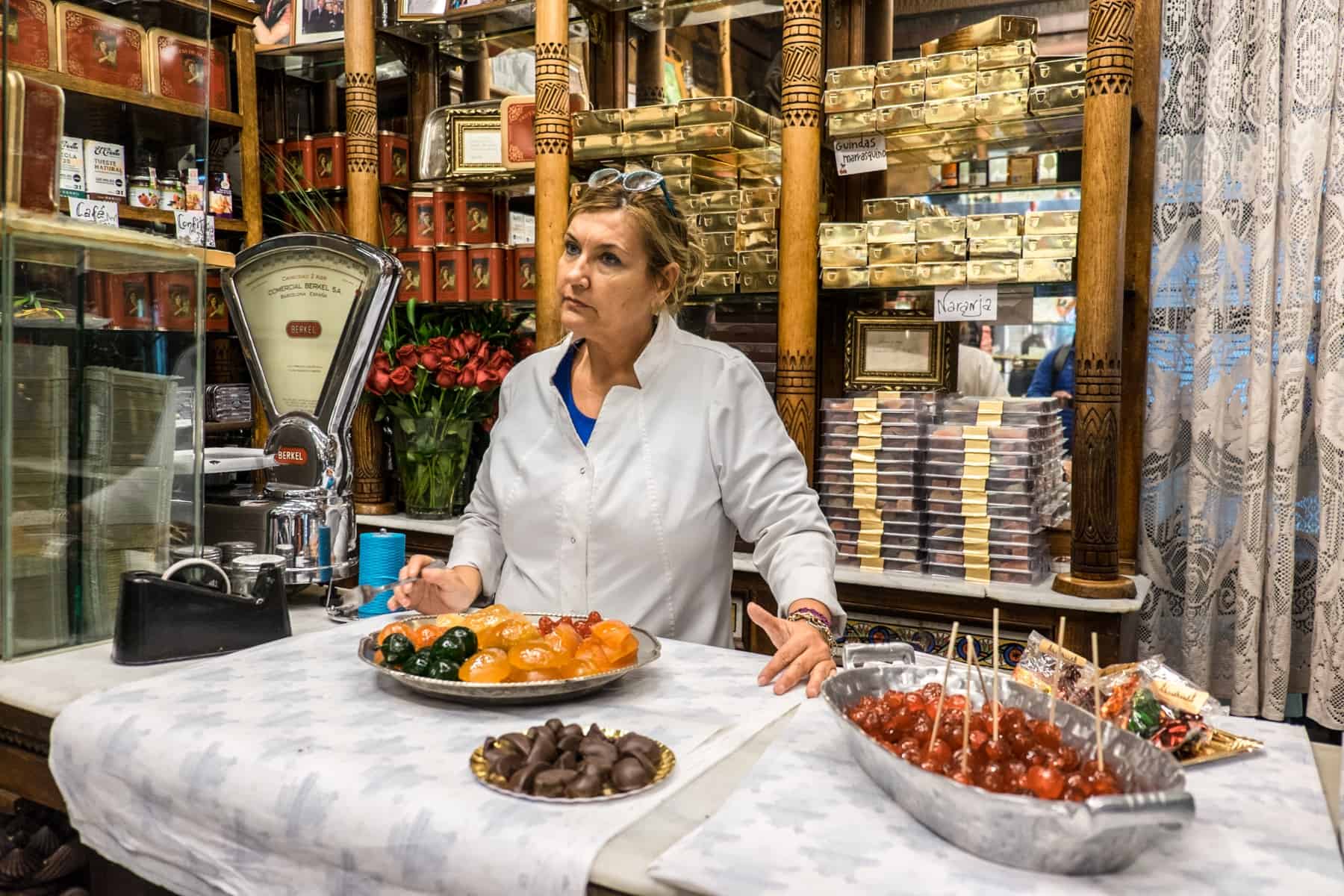 Things to Know About Travel to Zaragoza 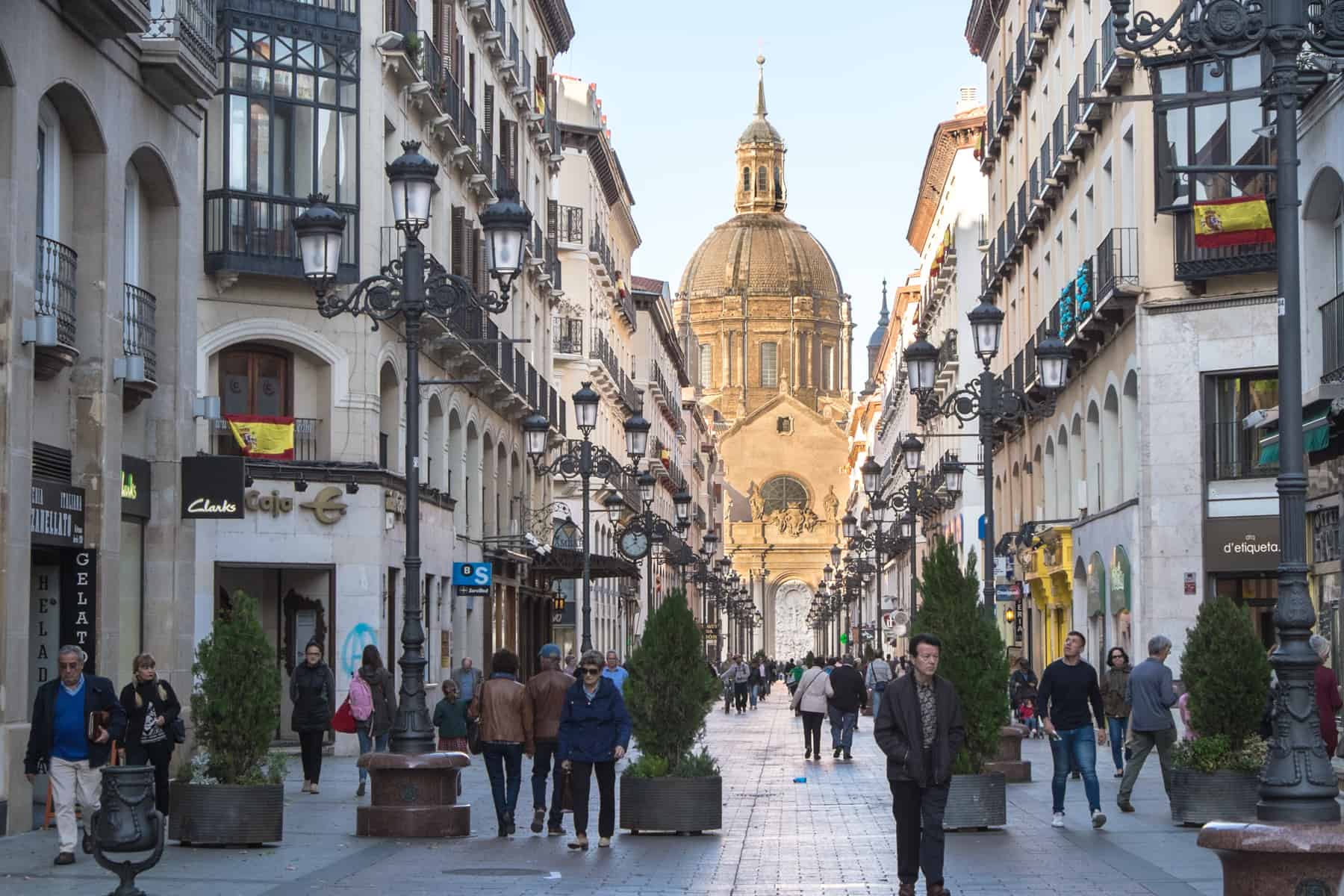 Ready for a centuries-long journey into Zaragoza’s artistic heritage? Here’s where to start.

How to Get to Zaragoza

We were able to wander beyond the opulent centre of Zaragoza, where there is an interesting contrast in its abundance of street art. It’s all a part of an annual urban regeneration drive, Festival Asalto (the International Festival of Urban Art), bringing an artistic new life to forgotten neighbourhoods. 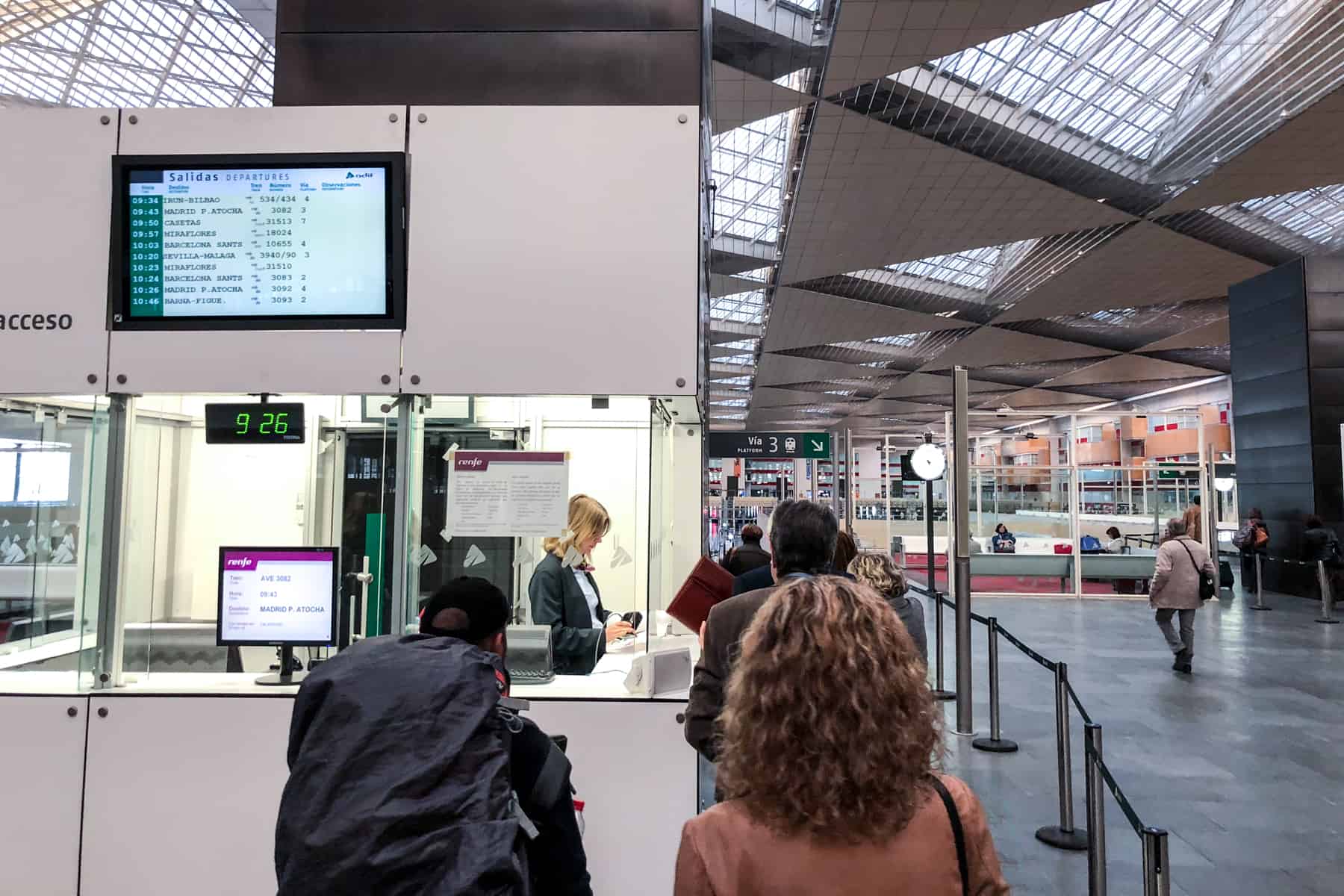 The beauty of visiting Zaragoza city.

The Art of Travel in Zaragoza, Spain – A Guide to World Heritage, Legacy and Urban Revival.