Skip to content
As you walk down to the river, you get a plastic bucket for one of the most fun parts of the day – bath time! Everyone, including the caretaker, swoops up bucket after bucket of water and throws it over the elephant as it leisurely enjoys being cooled down in the baking northern Thailand heat.

Elephants are highly intelligent and social animals, and this means of taming them produces nothing more than one of the cruellest shows on earth where you become more than just a spectator, but a participant.
Elephant bathing without abusive practice.
As a firm believer in karma, I’ve always felt guilty about what I have done. I tell people not to ride elephants or bathe with them to counteract my actions. I want to educate people about why you shouldn’t ride elephants in Thailand or anywhere else in the world.
Lek is hoping to change all that with her project, where tourism can move away from exploitation and bring elephants back to their natural environment through rehabilitation and education. 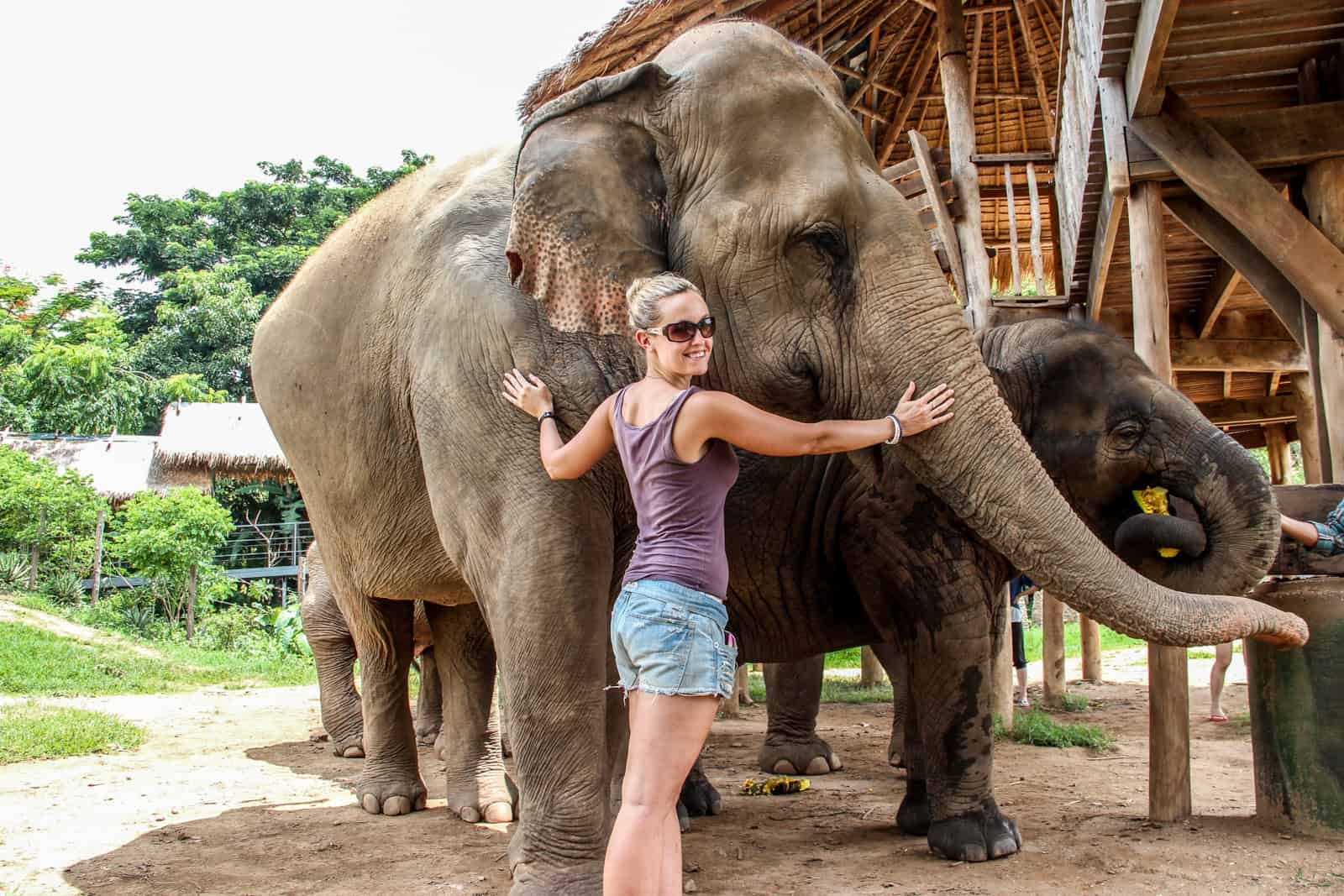 After a hearty lunch and a slow wander around the site, you learn more about elephant conservation and the problems in Thailand and much of Asia. More heartbreakingly with a video of “the crush” process – it’s both graphic and heartbreaking.

Elephant Nature Park promotes a core education and awareness programme that is helping to overcome a huge problem that exists with tourists riding elephants in Thailand.
You shouldn’t be riding elephants, only observing them in the wild.
You know you’ve done an excellent job when the elephant trunk hugs its caretaker in delight.
You will never RIDE an elephant, anywhere, EVER again.
The elephants at Elephant Nature Park come mostly from abusive pasts, including being overworked in trekking camps, forced breeding and street begging. It leaves them with permanent injuries from the horrific torture they had to endure at the hands of their owners, who use a practice known as ‘phajaan’ or the ‘crush’. 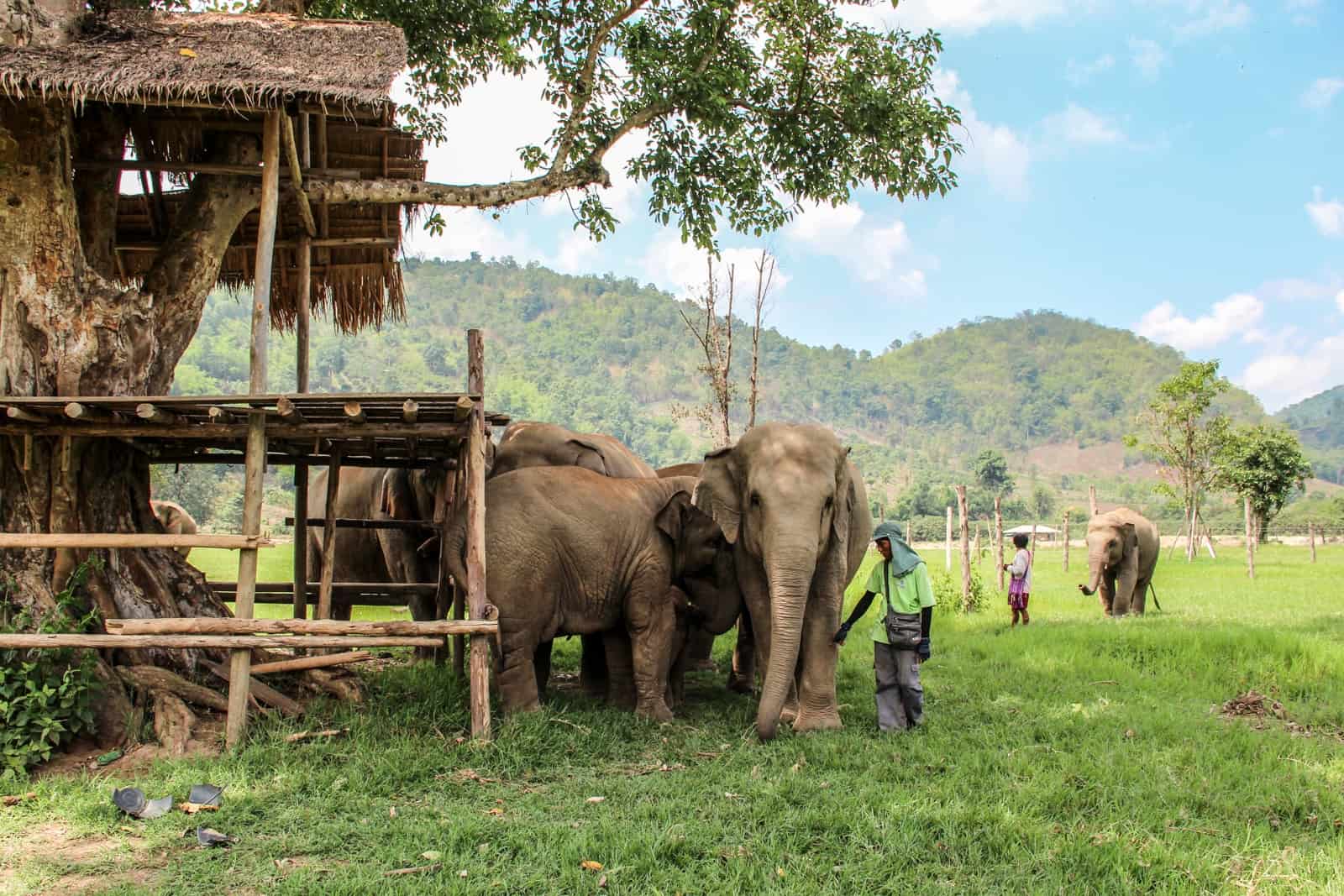 Responsible interaction with an elephant without riding one at an Elephant Sanctuary in Northern Thailand.

The Truth About Riding Elephants in Thailand

Disclaimer: This post contains affiliate links to handpicked partners, including tours, gear and booking sites. If you click through or buy something via one of them, I may receive a small commission. This is at no extra cost to you and allows this site to keep running.
You can visit Elephant Nature Park for one day (2,500 ฿), as I did, or do an overnight stay (5,800 ฿), multi-night and volunteer weeks (12,000 ฿). All visits include transport to the project site from the ENP city office, bus station or the hotel where you are staying. You can find an overview of the visit and volunteering packages here and book a full day trip, including hotel pick-up and drop-off.
No shows, no rides, and no gimmicks. Just love.
After all, what would Thailand be without its elephants?

While tourism has given elephants a new lifeline, there are no strict penalties for abuse and no extensive measures to avoid mistreatment.

There are many reasons why you shouldn’t be riding elephants in Thailand, and visiting the Elephant Nature Park in Chiang Mai enlightens you as to why. It remains one of my most significant and most valuable lessons in travel about wildlife tourism in South East Asia.
You can interact with elephants without riding them.
There are also no shows, no rides, and no gimmicks like elephant painting. Instead, all that radiates from the elephants and everyone that works here is love, trust and positive reinforcement.
A guide is with you at all times, taking you to the best viewing spots via the walking platforms or out in the open where you can interact with the elephants freely, alongside each of their caretakers. 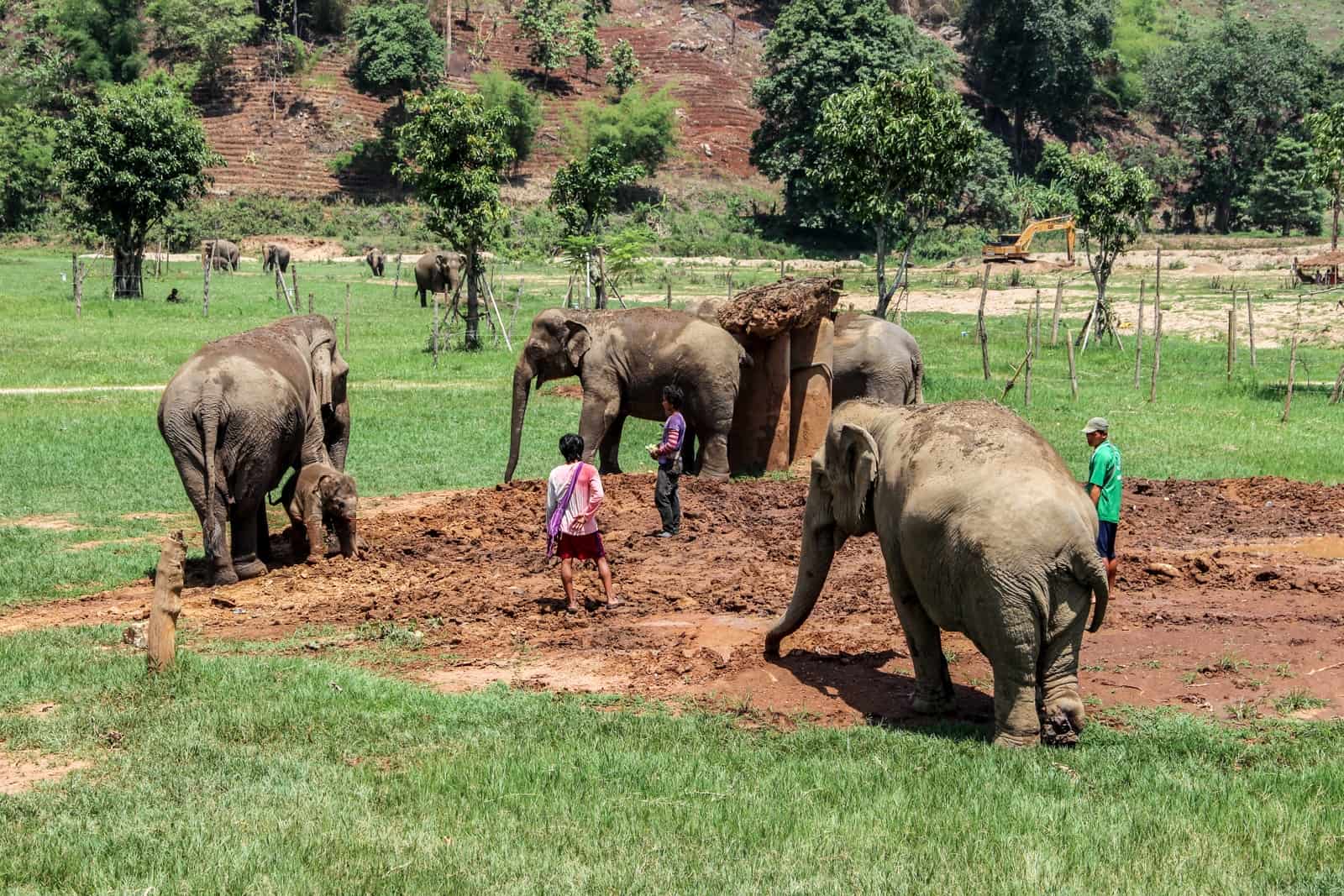 The controversial topic about riding elephants in Thailand reflects the ongoing plight of the Asian elephant as it continues to be affected by this abusive tourism practice. Together, by raising awareness of why riding an elephant is wrong, we can help to end this form of entertainment. 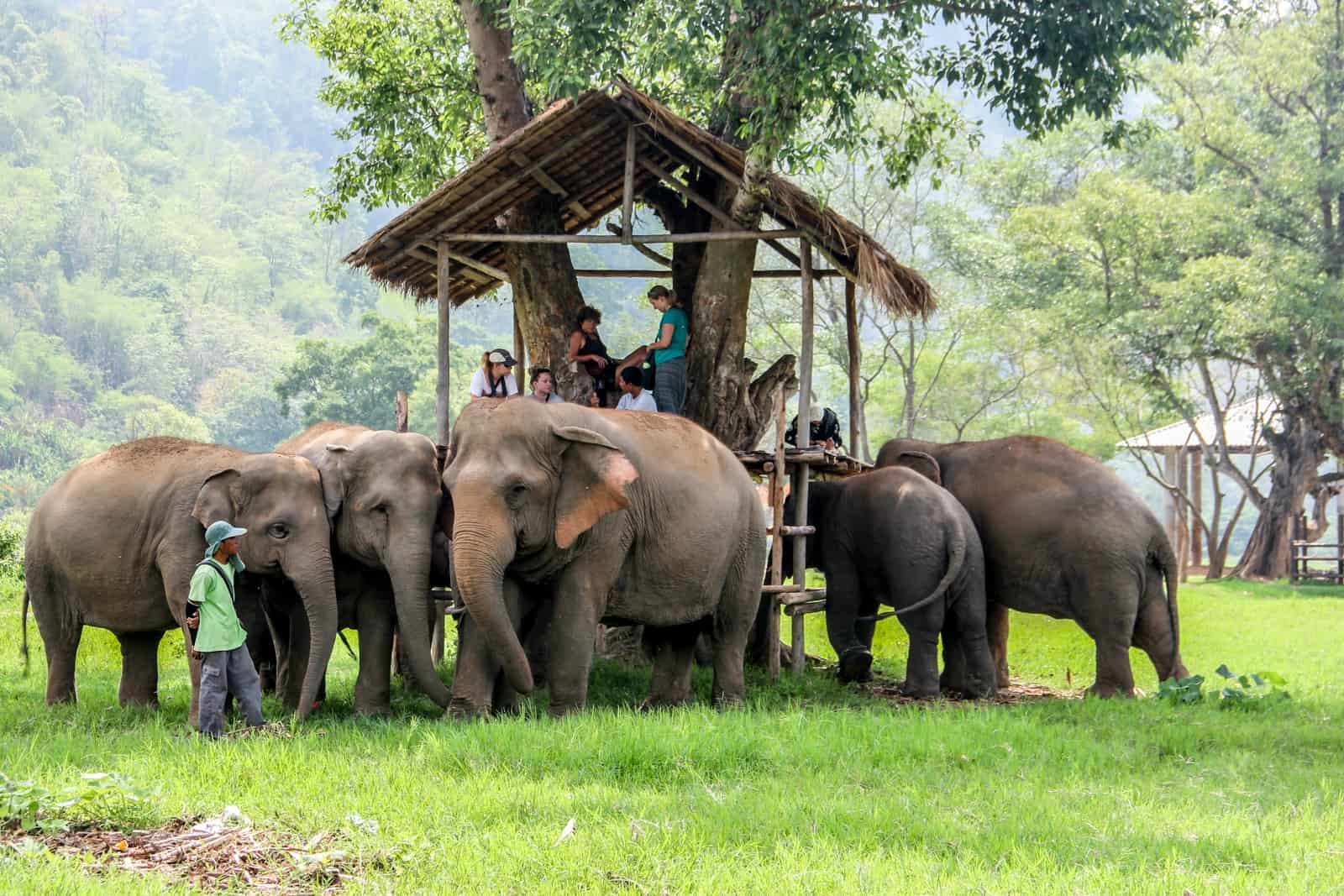 Elephants enjoy at the Elephant Nature Park after a life of abuse and mistreatment.
Playful elephants know the Nature Park guides and carers. 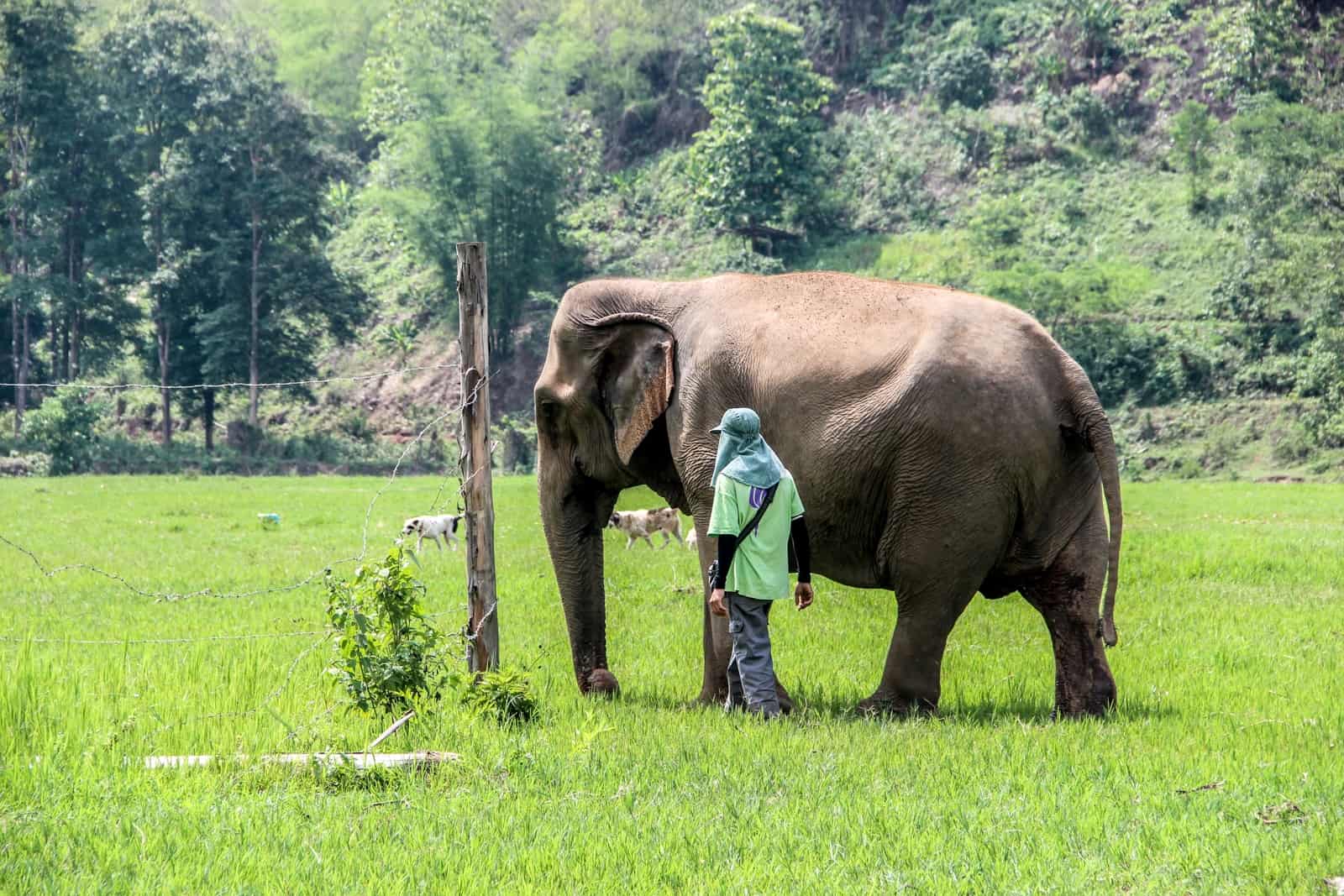 Except at Elephant Nature Park. This sanctuary is a home for the elephants, not a place where the animals are forced to work. Established by award-winning conservationist, Sangduen “Lek” Chailert over 16 years ago, it’s a project that rescues injured and mistreated elephants and educates tourists about responsible practice. 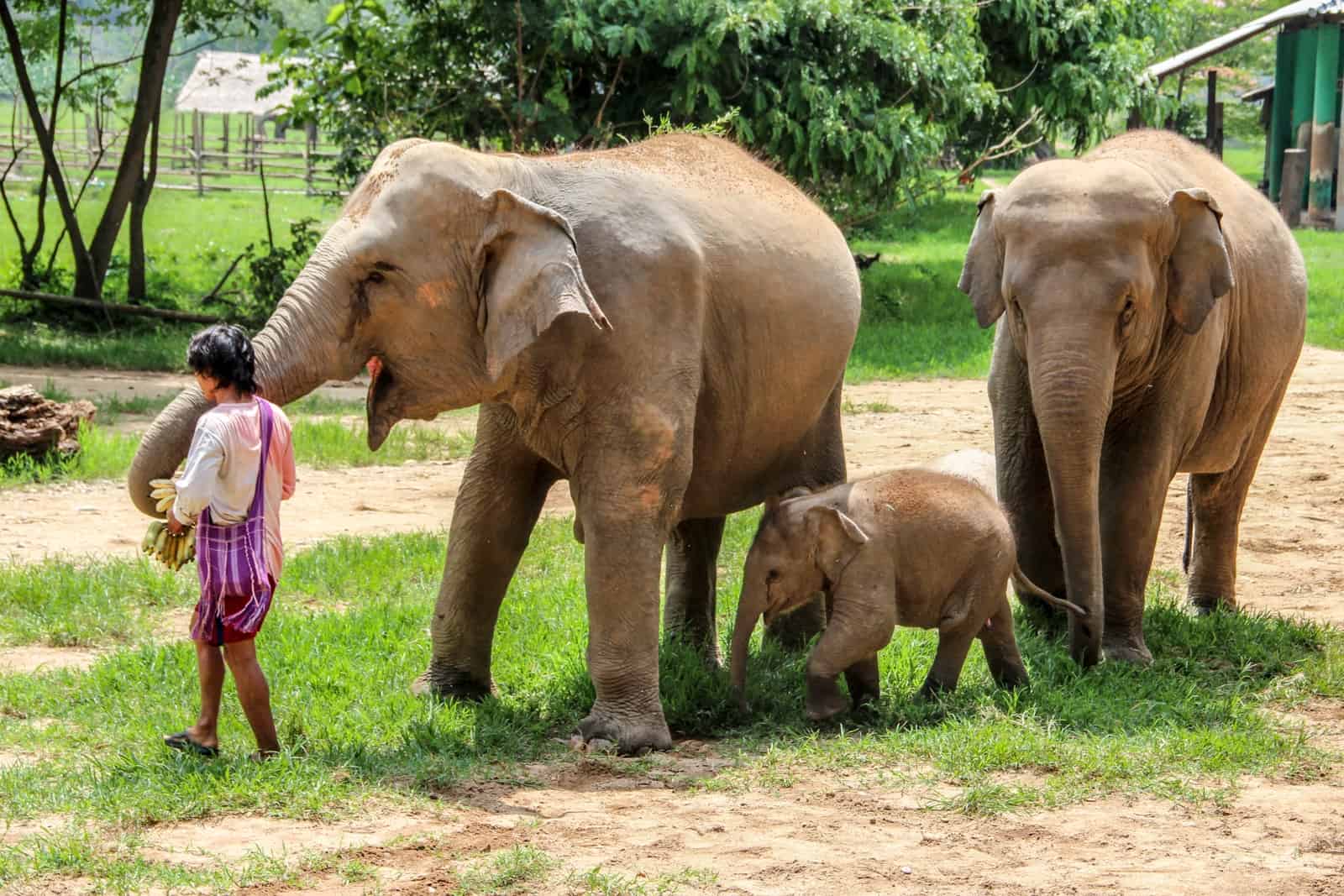 Responsible Interaction with Elephants in Thailand 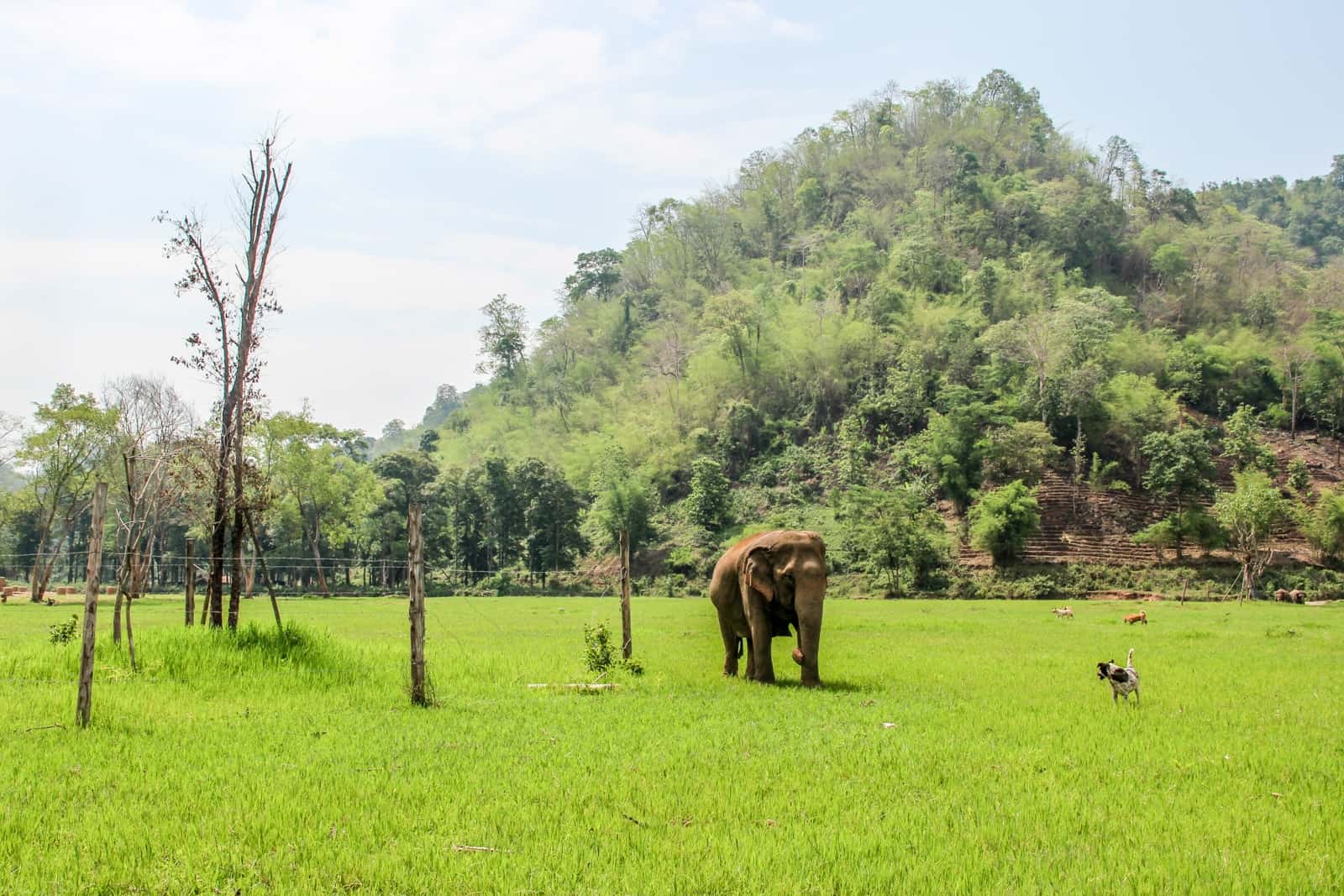 In India, I was used to elephants wandering the streets as if they had as much right to roam like a local, a goat or a cow – almost majestic in their presence. In 2009 on my first trip to Thailand, a country symbolic of everything elephant-related, my curiosity got the better of me. I rode an elephant through a small area of the jungle outside of Chiang Mai that was, back then, promoted as a conservation park. Then in 2012, in Chitwan National Park in Nepal, I embarked on an ‘elephant safari’ following a rhino through the dense jungle while four of us sat in a large square wooden hold strapped to the elephant’s back. The next day I sat on an elephant as it bathed, and almost instantly, it tried to throw me off. 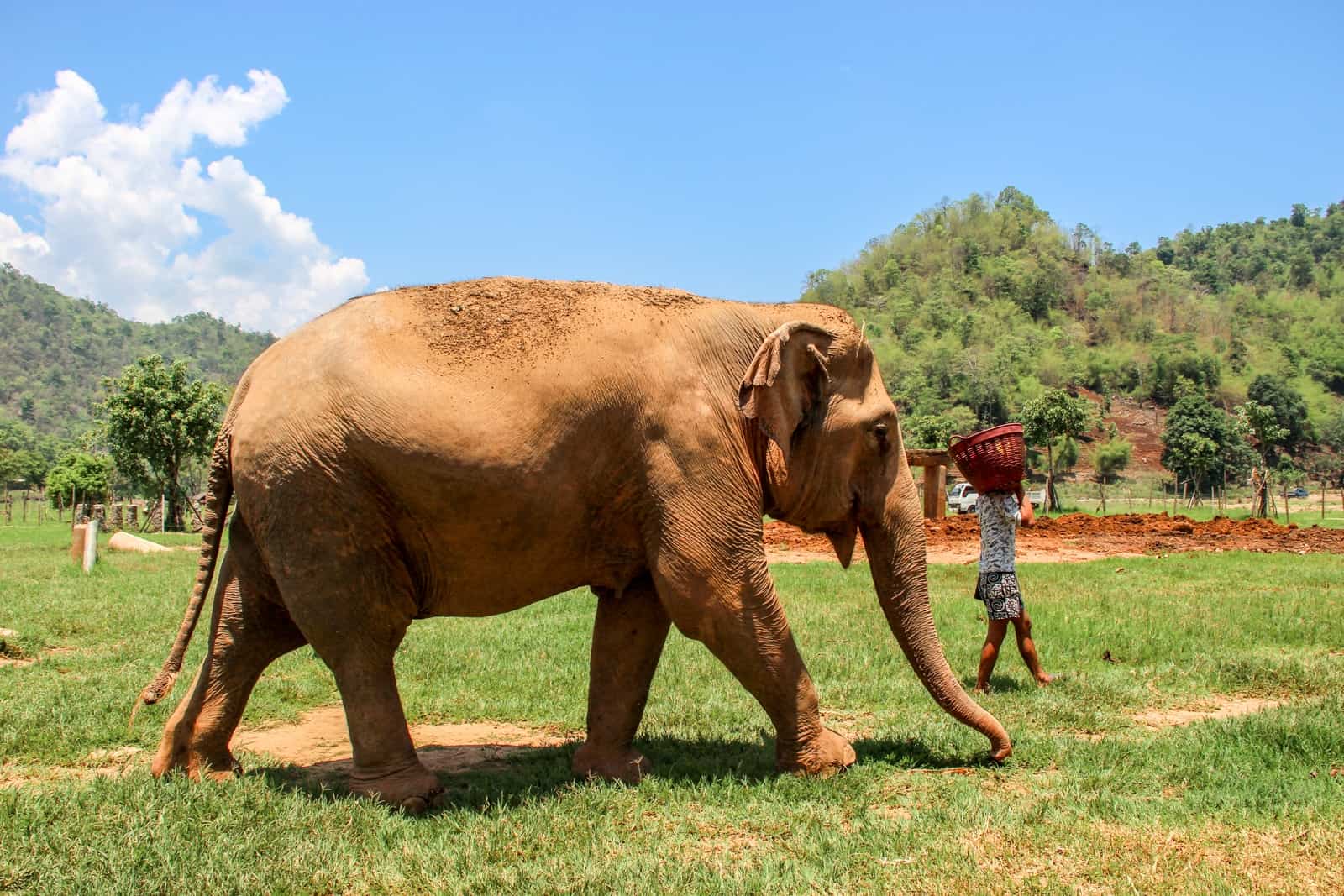 The videos explain how the industry exists today following the time elephants were used for logging. You will never think to ride an elephant, bathe with an elephant, take an elephant safari ride, or support any project that sees elephants painting or performing, anywhere in the world, ever again. 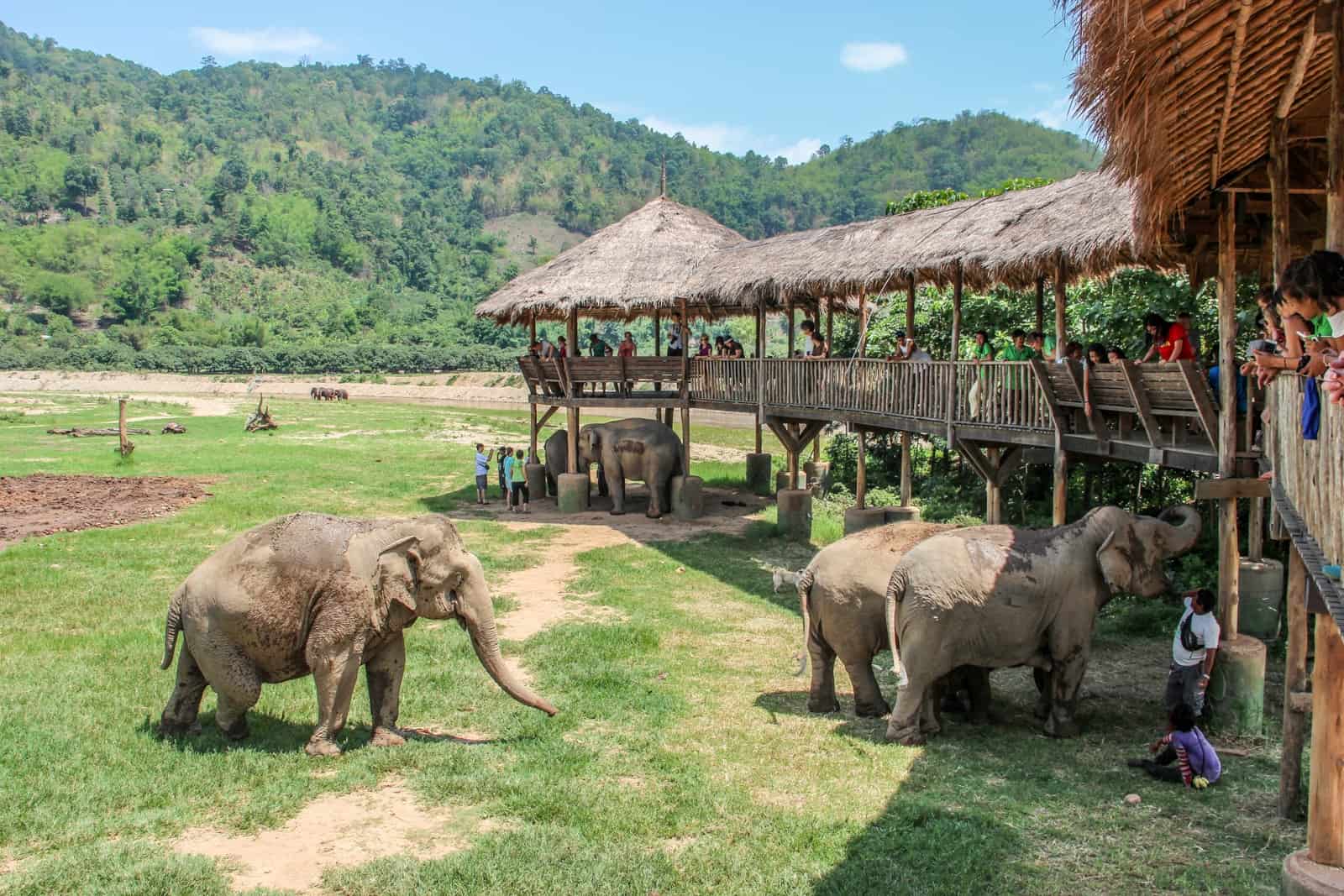 Everyone is encouraged to get involved with feeding time. As the elephants arrive, you are overwhelmed by the crowd of trucks swooping up and sniffing all around for their eagerly awaited treats.

Elephant Nature Park invited me on a one-day visit to experience the incredible work being done here and help raise awareness of the plight of the endangered Asian elephant. They did not ask me to write a favourable review and all opinions in this article remain my own based on what I saw, felt and learned.
We need to save the endangered Asian Elephant, not be responsible for their demise. 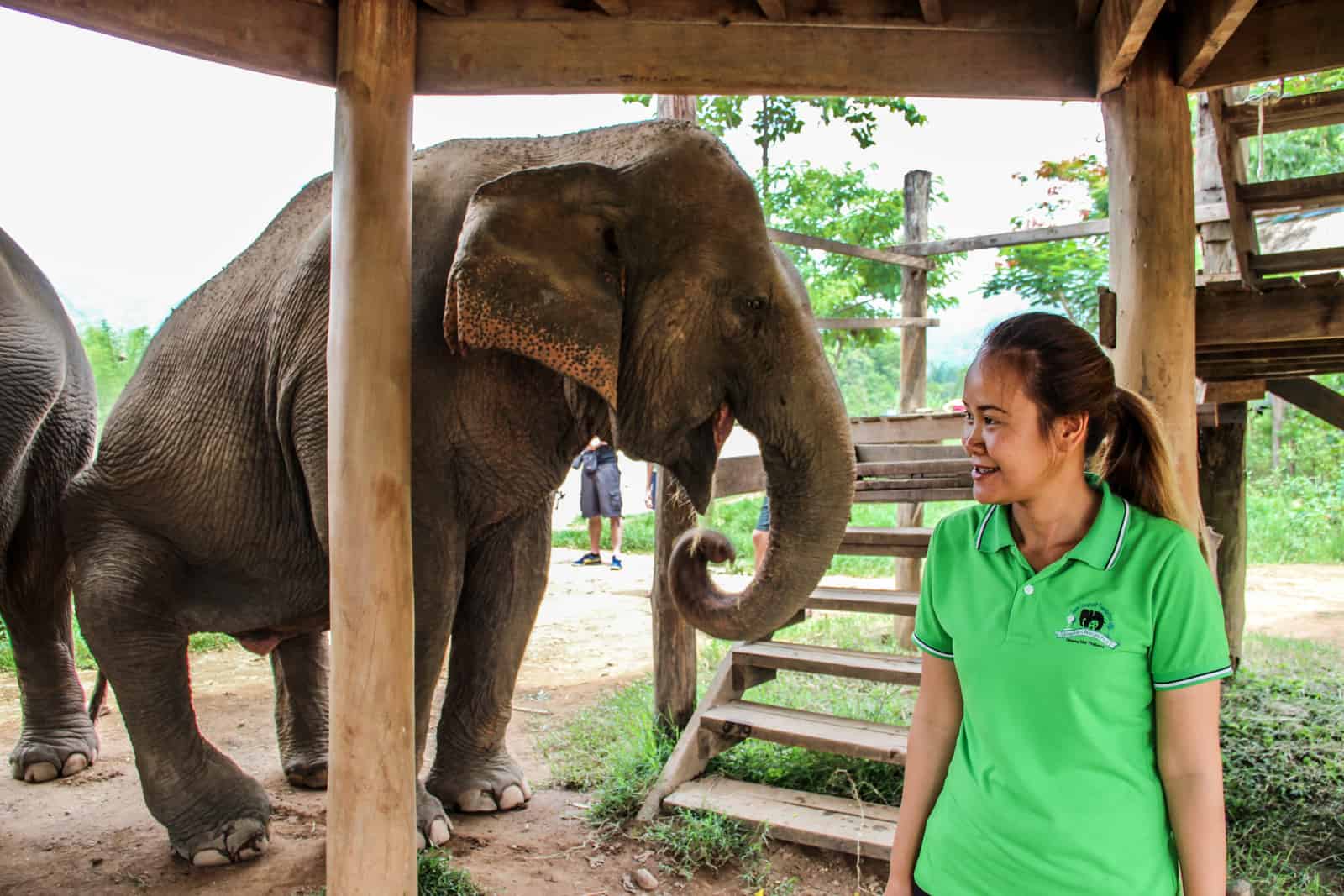 With dense parkland, a river and a mud bath at hand, the elephants roam freely and do as they please. 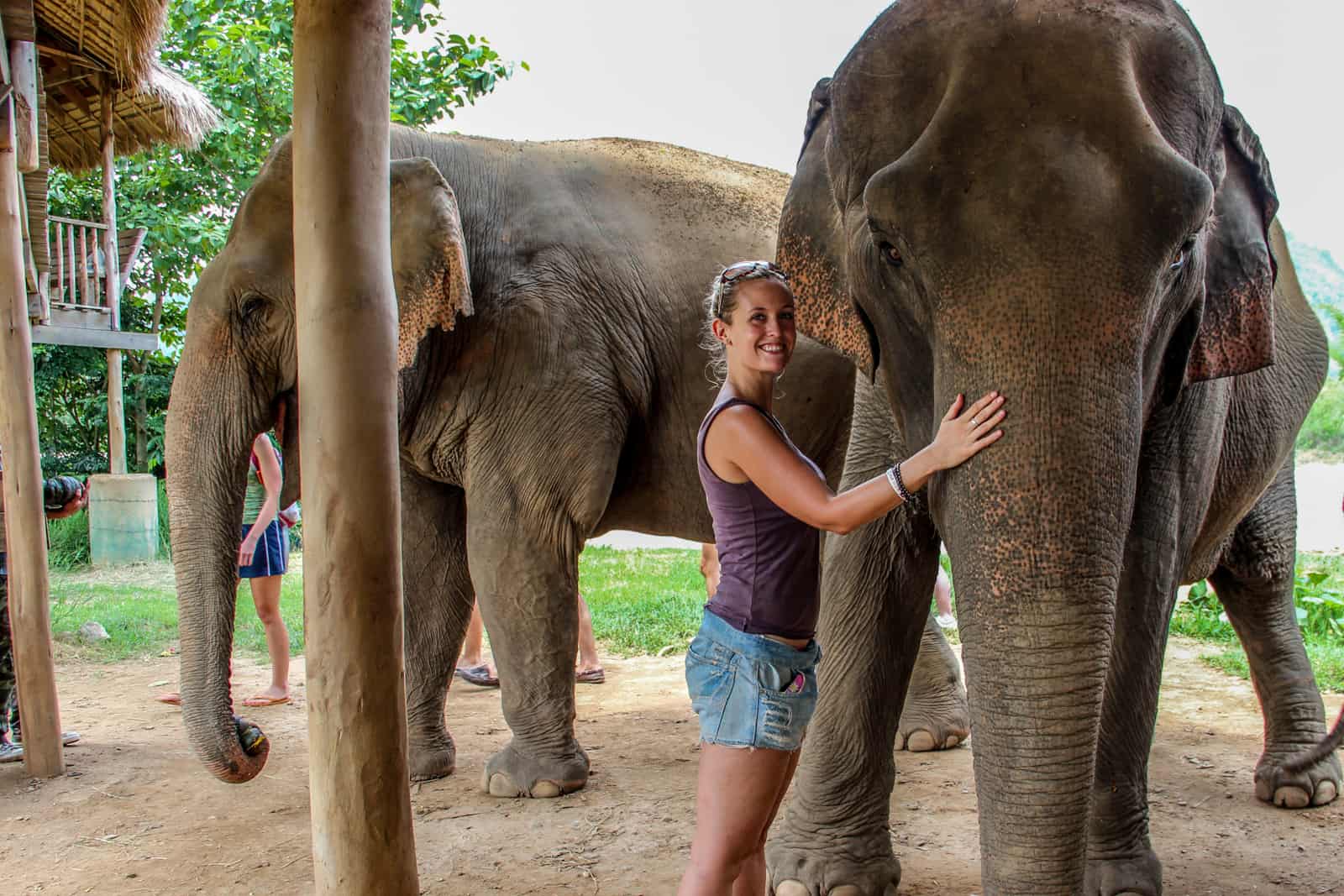 I’m a responsible traveller and do my best to adhere to best practices and highlight topical issues regarding community and conservation in tourism. I aim to practice what I preach; dedicate time to long-term volunteering and projects close to my heart; support local people and community enterprises, and be aware of how and where I spend my money. 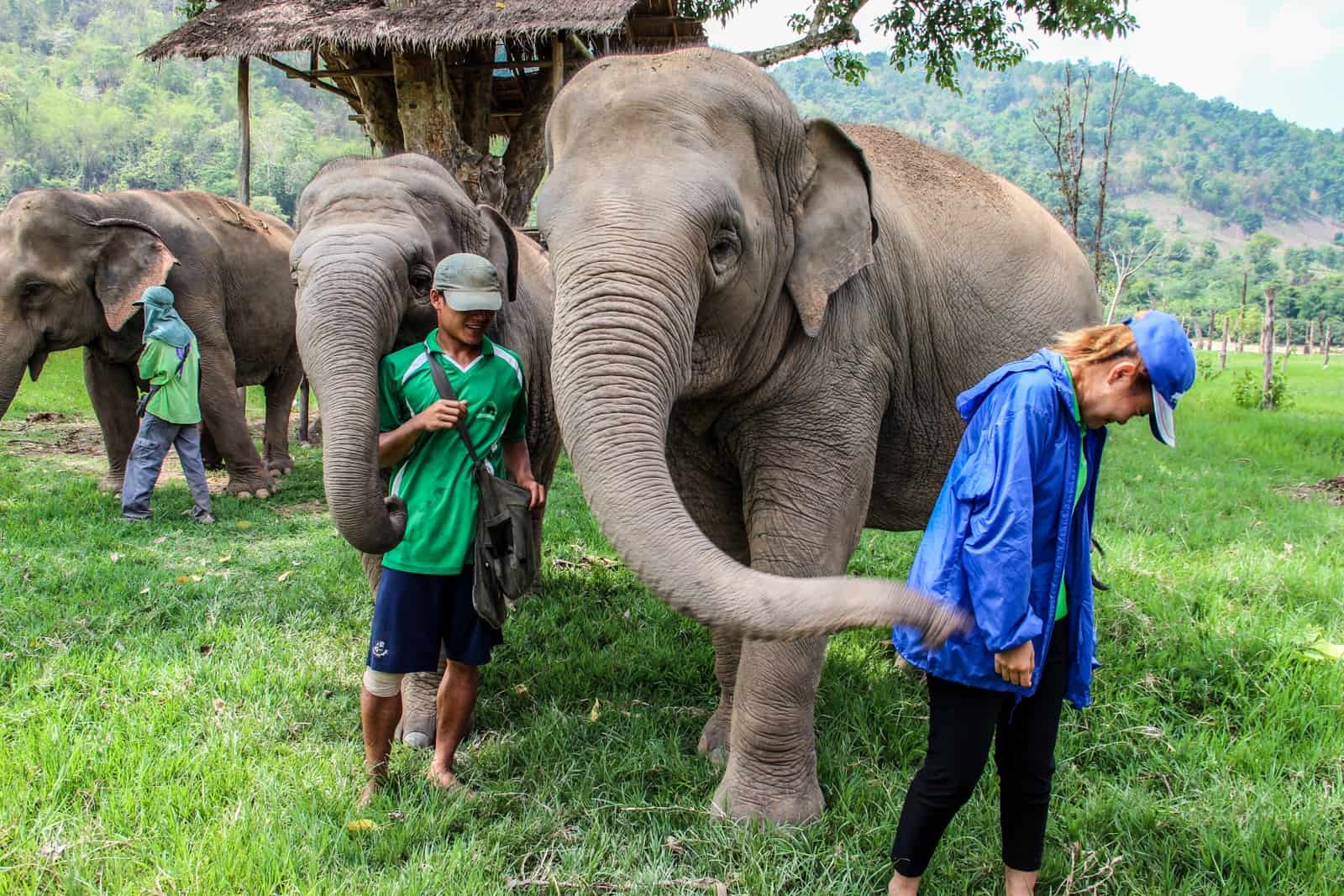 Getting so close to the elephants takes a bit of getting used to, but once you get the hang of it, it’s an incredibly humbling experience to have such close interaction with them for such a long time.

Even a neighbouring elephant camp has decided to try out the Elephant Nature Park’s concept of care and retire their female elephants from tourism treks.
Freedom. Say no to elephant riding in Thailand. 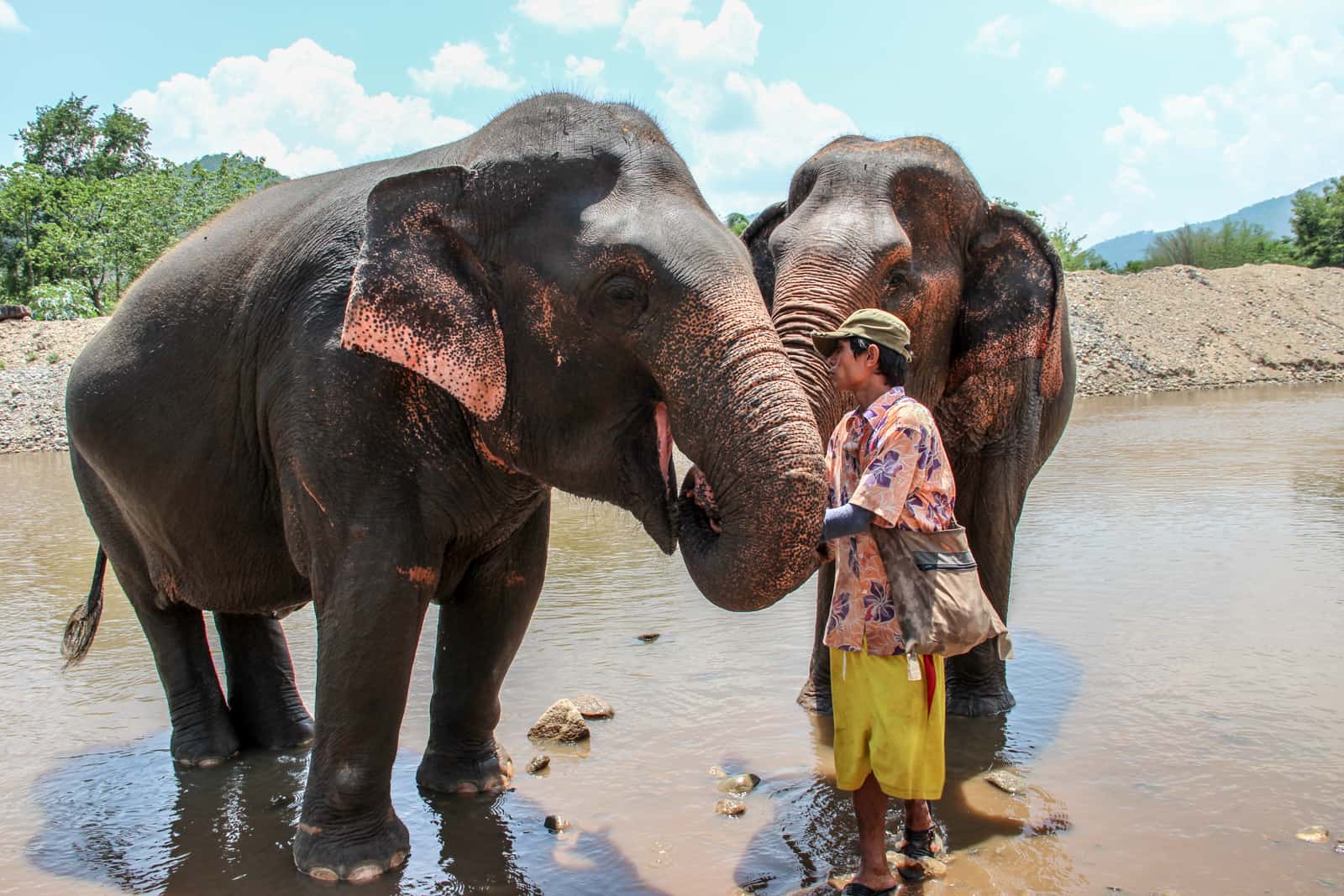 For more Borders of Adventure articles on best animal practice and conservation, read:

Placing a big chunk of fruit or a small bunch of bananas at the end of the elephant’s trunk, it’s in their mouth and swallowed quicker than you can reach into the basket for the next piece. The cheeky ones even find a way to outdo you, swooping their trucks into the empty food basket to hoover up every last bit.
In 1989 logging was banned in Thailand, putting working elephants out of a job. Thailand sold many elephants to neighbouring countries such as Burma, and those elephants left were seen as pests. The population of elephants in Thailand quickly declined, but those that remained were left with one legal option – working in tourism. Many elephants were (and still are) abandoned or left to die without it. 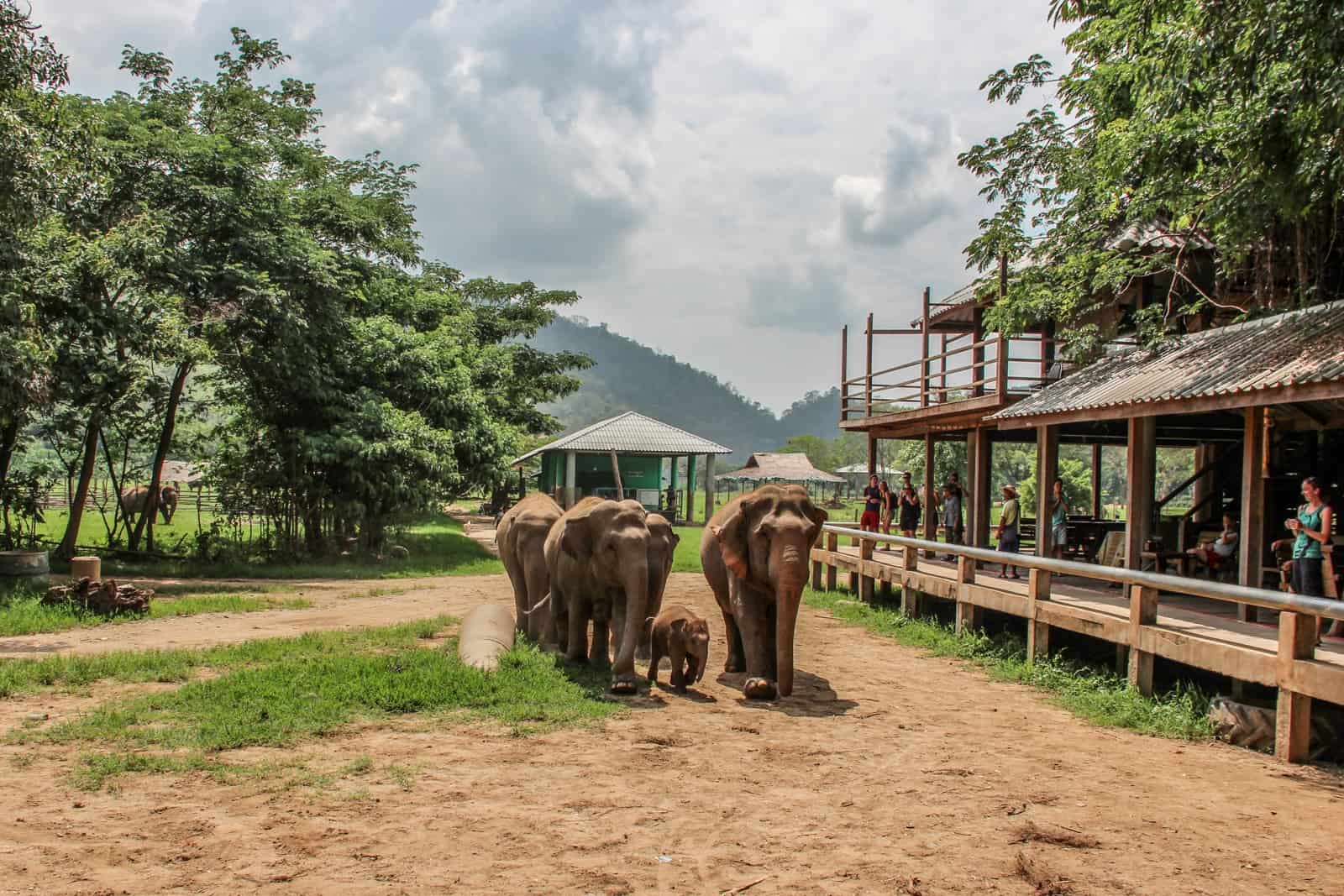 I listen to people respond that they will do it anyway because it’s the only means of interaction they have found available to them. But if you take away these cliché tourist experiences, it doesn’t mean you CAN’T have contact with these magnificent creatures.

You don’t have to ride or sit on an elephant to help bathe it.
Elephants were not made for humans. 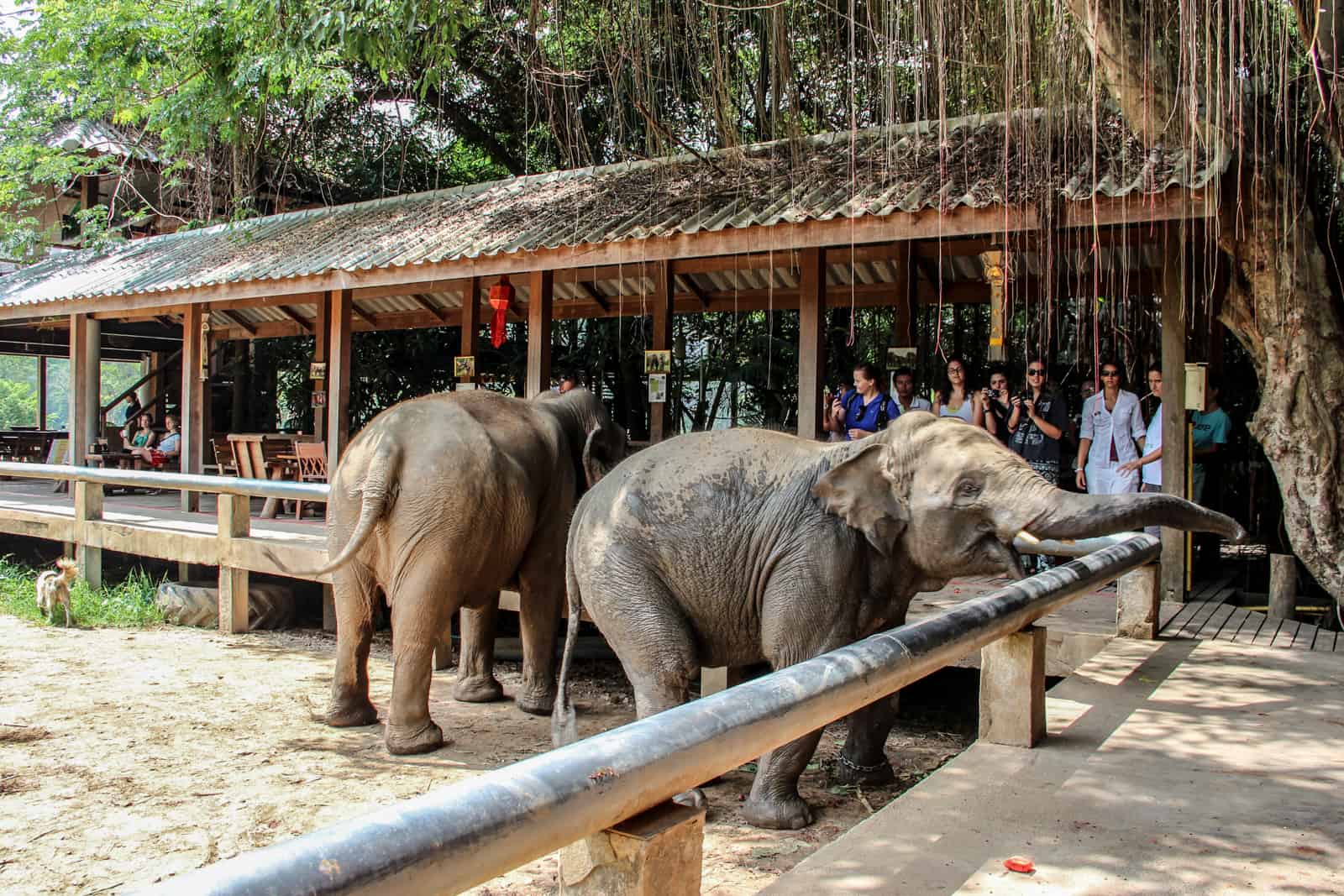 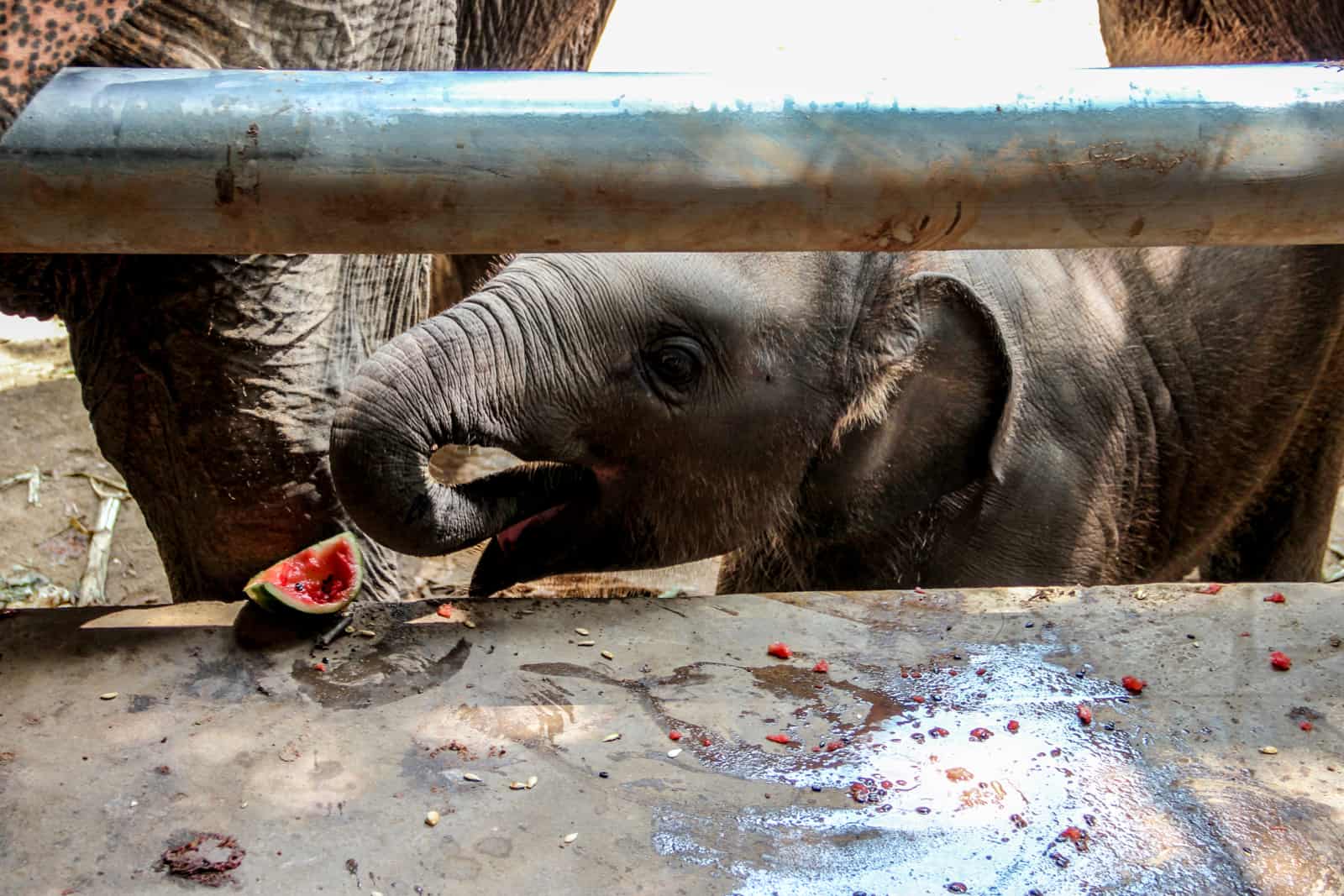 The elephants are cheeky, happy and eager to give hugs and sloppy, trunk-slurping kisses to their caretakers and visitors.

In Chiang Mai, I researched, collected promotional leaflets and looked at treks, tours and day trips from local providers. All offered itineraries that included riding elephants – precisely the kind of ill practice I was trying to avoid. 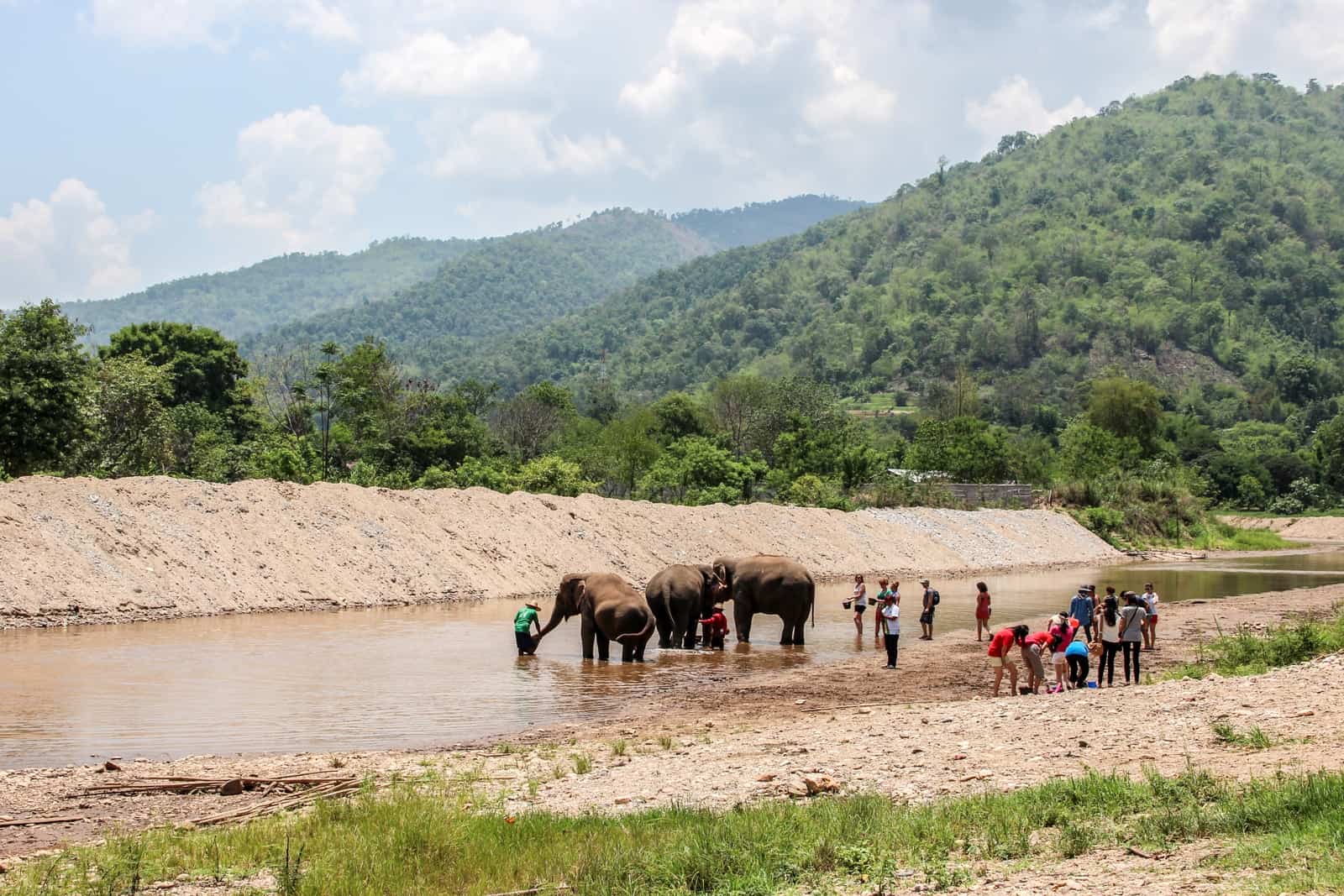 Elephant tourism in Thailand exists because there is still a high demand for travellers looking for places to ride and bathe with elephants for entertainment. This exploitation of elephants began following the changes in Thailand’s logging industry, where elephants were the primary source of labour. 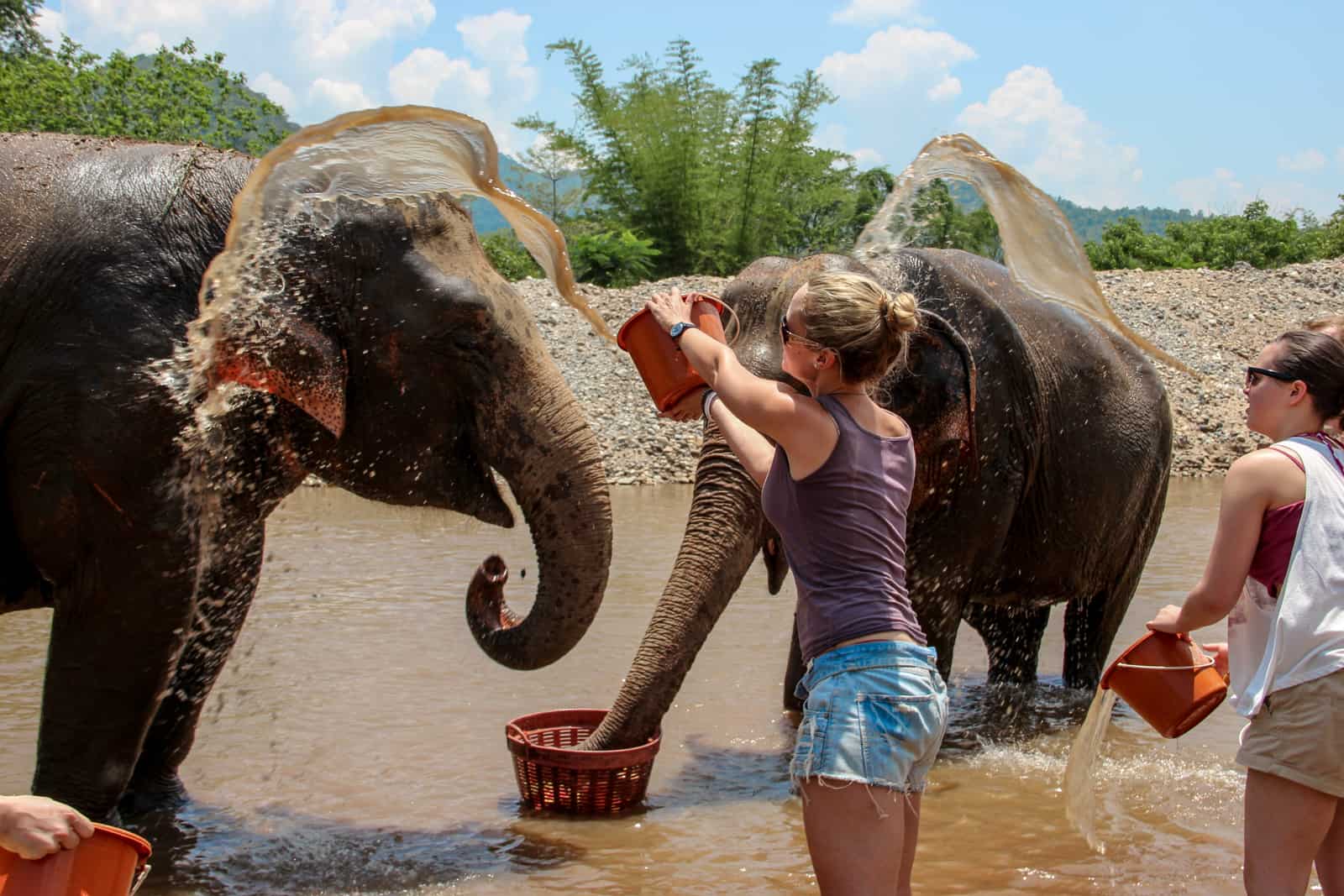 You immediately notice that there is no hitting, shouting, or the use of tools from which inflict pain to force action. The park does not have forced breeding or the use of chains (something I have seen all too often at other parks). 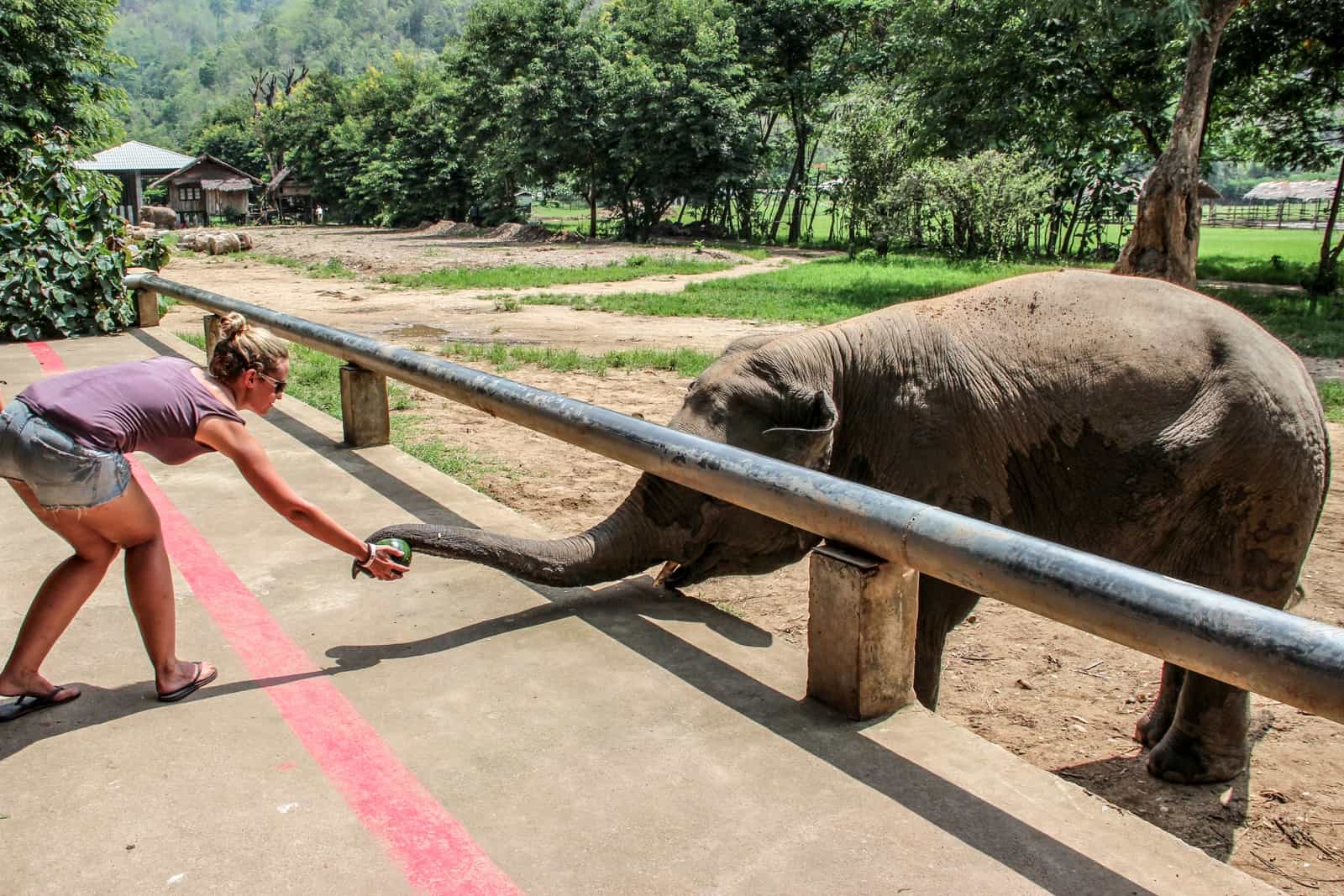 Education and awareness. The best kind of experience seeing elephants.

Why You Shouldn’t Ride Elephants in Thailand

Seeing elephants and getting close responsibly.
Only then did the sheer unhappiness of these creatures strike me. The realisation that while we humans pale compared to the size of an elephant, this kind of contact violates their freedom and makes them unhappy. I vowed never to engage in such practices ever again.
Do you think an elephant loves shooting water at you through its trunk while you jump around on its back while the mahout continues to hit it throughout the ‘performance’? Hell no! You certainly won’t be seeing that here – not even the caretakers climb on the animals!
Guides are with you at all times during your interactions with the elephants.
At the park, you spend the entire day interacting, observing and assisting with the feeding of the animals. As soon as you arrive, you are given a quick orientation tour and are straight out in the vast green 250 acres of landscape these elephants get to call home. 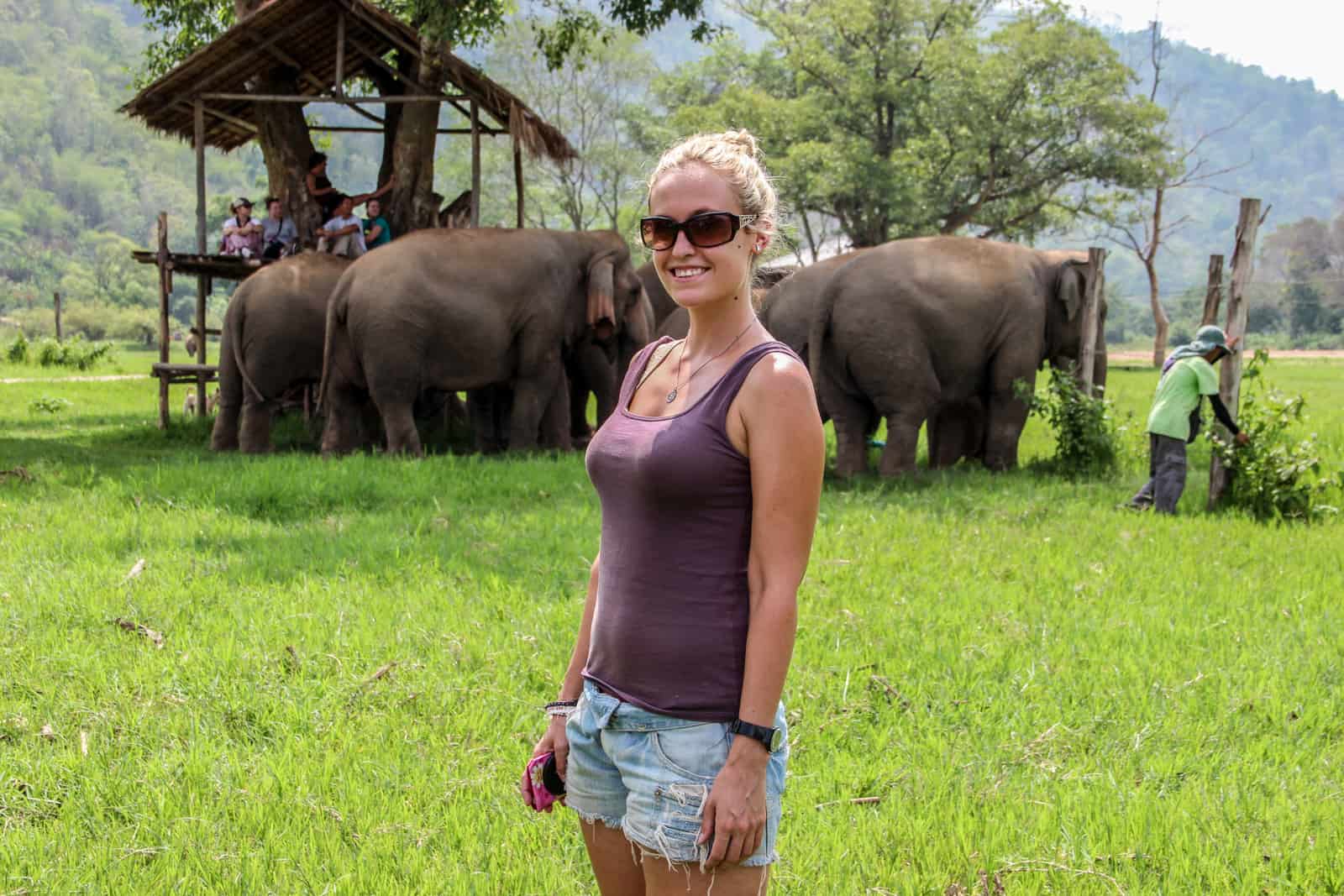 Life in 250 acres of landscape at Elephant Nature Park. 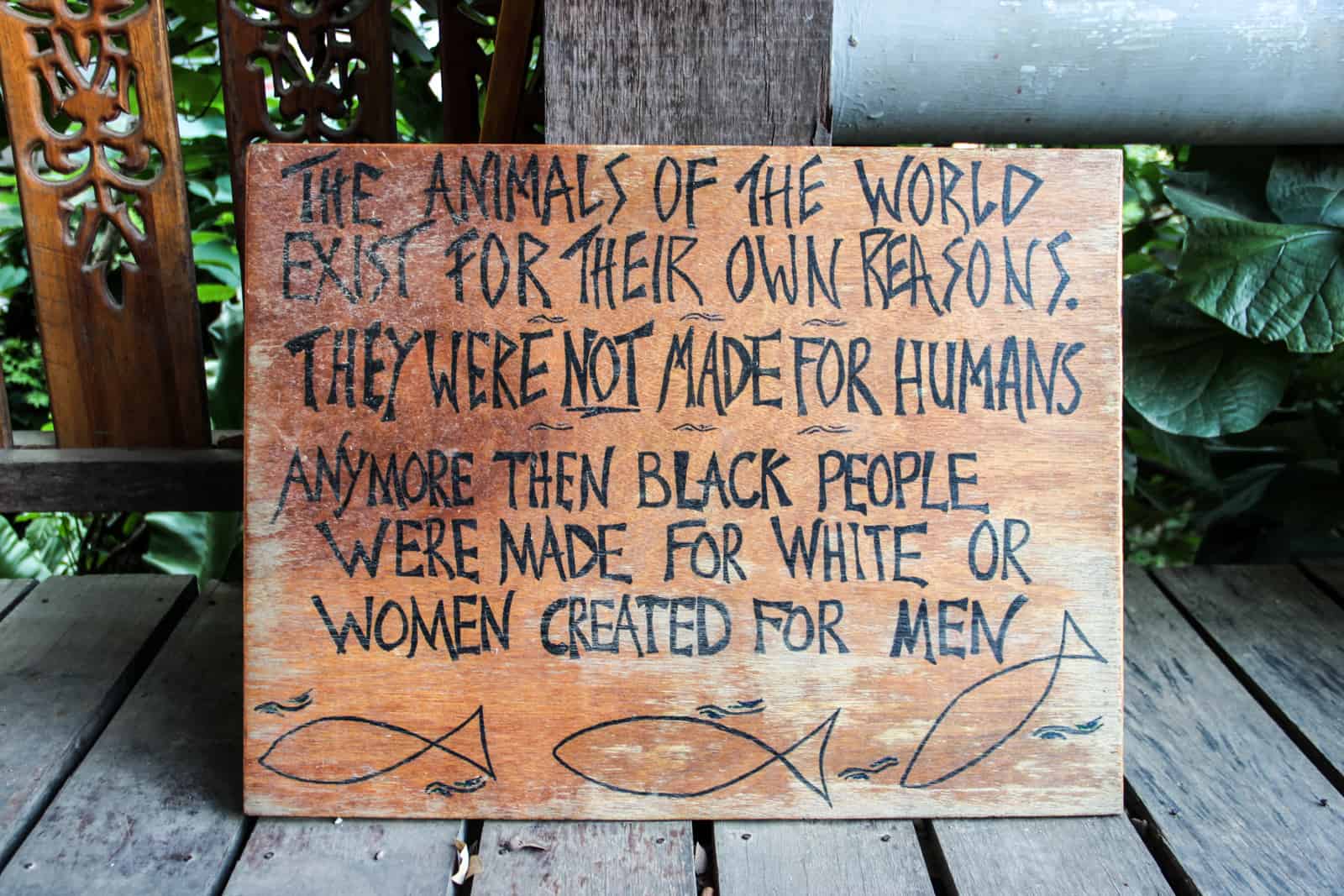 The elephants are tied up in a small cell-like structure for three days and nights, beaten and subjected to sleep deprivation and hunger to break their spirit and conform to demands. Except for the elephants born at the park, all bear the scars of this tragic past.

Except to work in tourism, elephants get subjected to a horrifying and abusive ‘training’ process called “the crush”. Living in cruel living conditions, shackled and beaten, the elephants suffer extreme psychological and psychical abuse as part of a method to get them to submit to humans and basic commands. 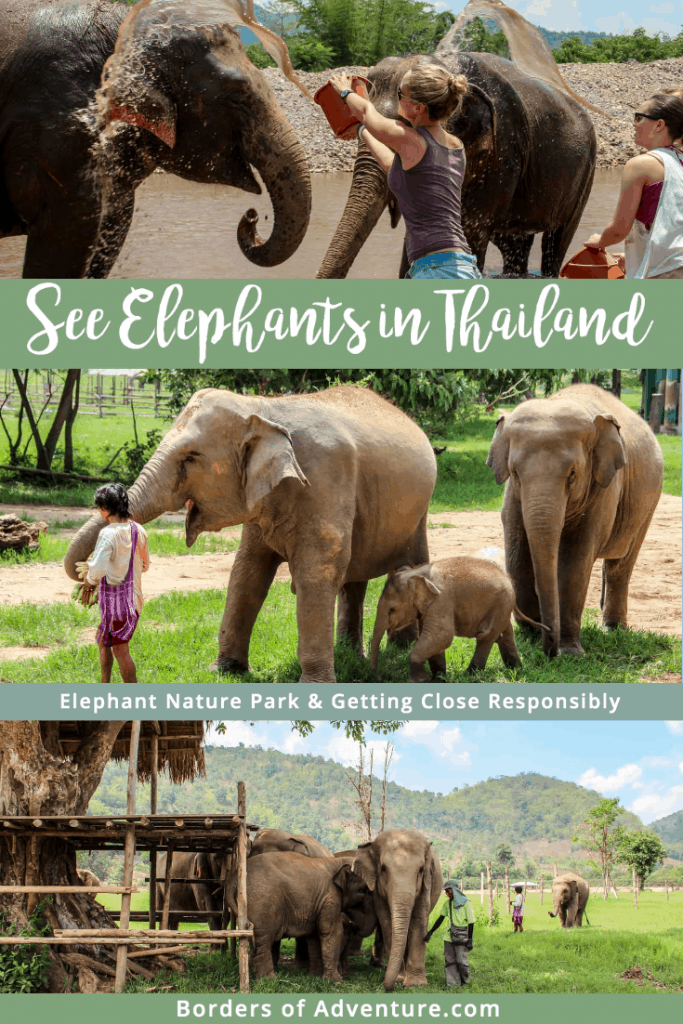 Only half of the Thai elephant population is considered endangered – and that’s the wild ones. The rest, per Thai traditions, are seen as livestock or ‘domesticated’ and are therefore not protected. But I’m also guilty. While I never visit poorly run zoos, join baited cage dives with animals or give money for a picture with a dancing monkey, I have engaged in harmful tourism practice when it comes to the treatment of elephants in Thailand and Asia generally.
The elephants arrive at the feeding station.