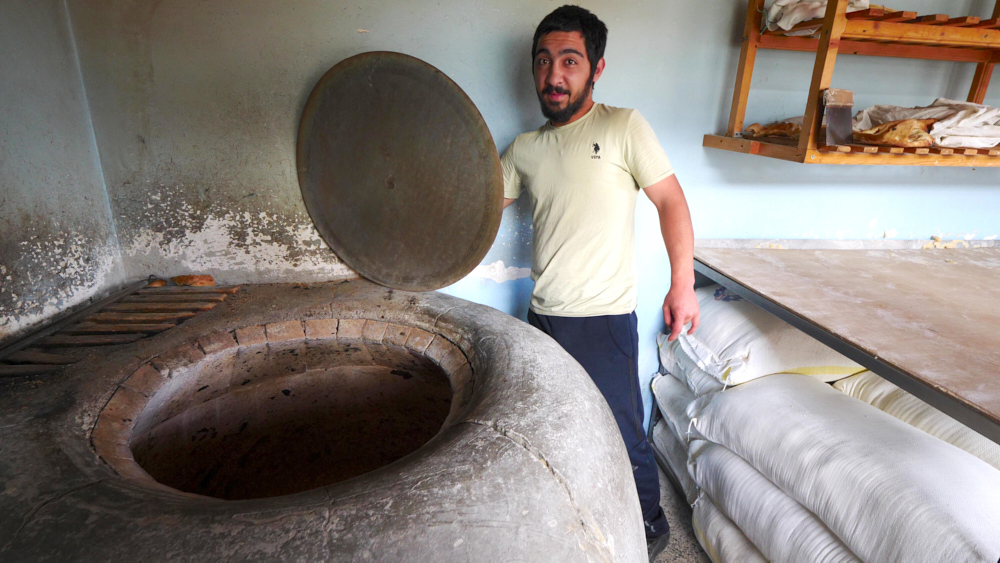 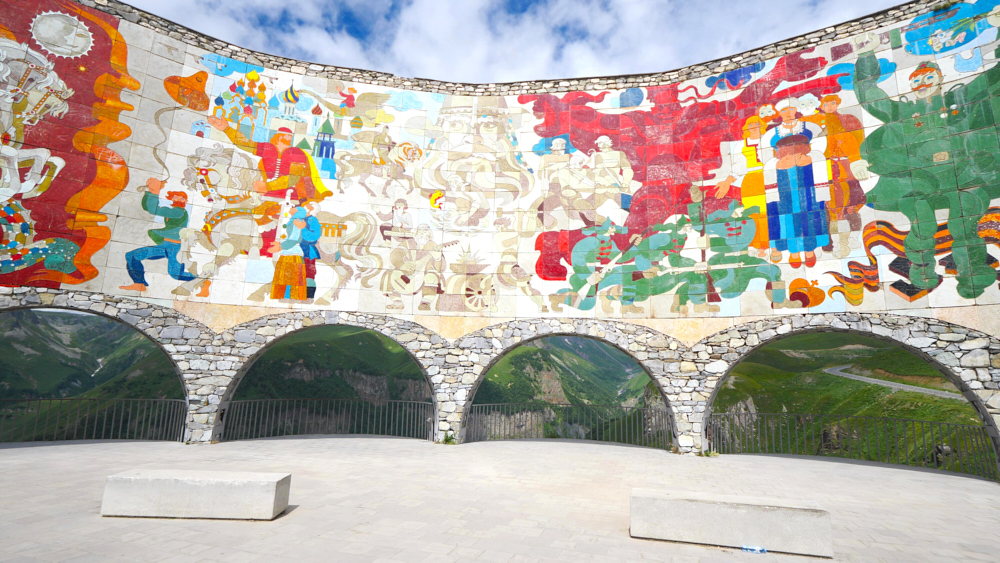 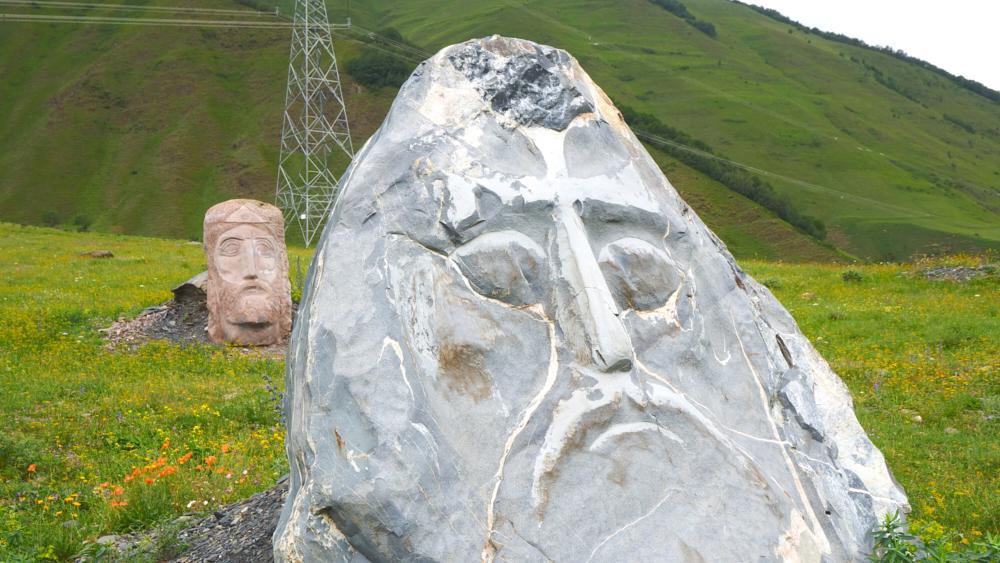 The first location of note is the Gigantic Sculptures or Gigantic Heads of Sno. These odd-looking stone heads pockmark a field along the main road and bring to mind the enigmatic moai of Easter Island. But these heads are a lot younger. They are the brainchild of local sculptor Merab Piranishvili, who envisioned an open-air museum filled with the stone heads of prominent Georgian writers, poets, and artists.
NOTE: If you need to check the visa requirements of a particular country, click here. To apply for a visa, find up-to-date visa information for different countries, or calculate the cost of a particular visa, click here!
At a nearby spot, we also bought some salty and creamy mountain cheese for 9 GEL, or roughly USD. We enjoyed them with some Turkish coffee at Coffee Corner next to the Kasbegi National Park visitors center. It was an excellent and flavorful way to start our day! 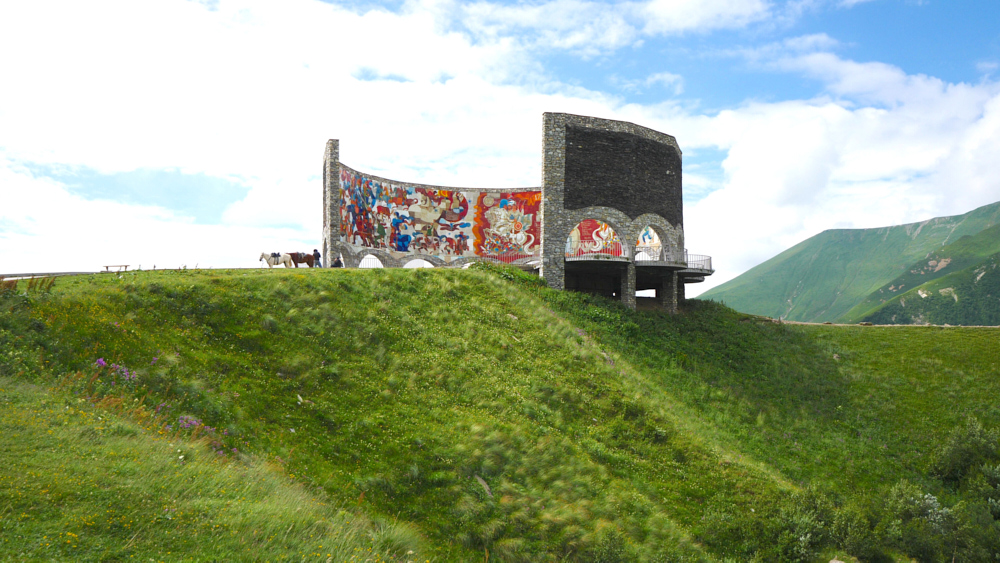 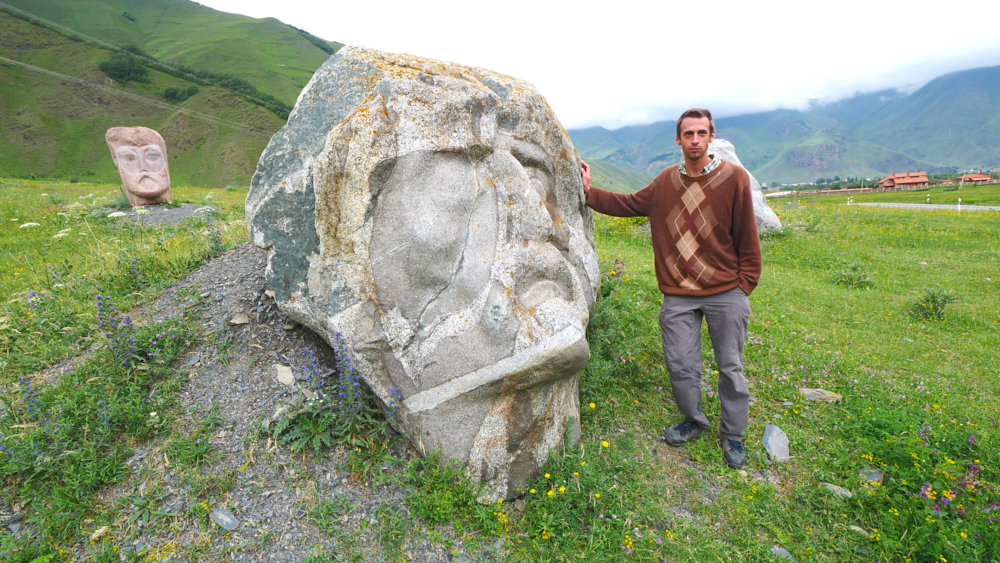 In total, I enjoyed five types of khinkali: beef and pork, potato, garlic, mushroom, and lamb. I adored the beef and pork, but as someone who loves the gaminess of lamb, it was hard to beat that one! It was so juicy. I also liked the pierogi-shaped garlic khinkali, which was very unique.

Inside the Church of the Mother of God are frescoes from the same time period. The Soviets whitewashed the walls, covering and destroying many of the frescoes. Also, other frescoes were damaged or destroyed by a fire in the 18th century. However, some were able to be restored. They’re quite beautiful and include depictions of Jesus Christ, various saints, and even Hell. Because of that, it’s among my favorite things to do in Kasbegi, Georgia! 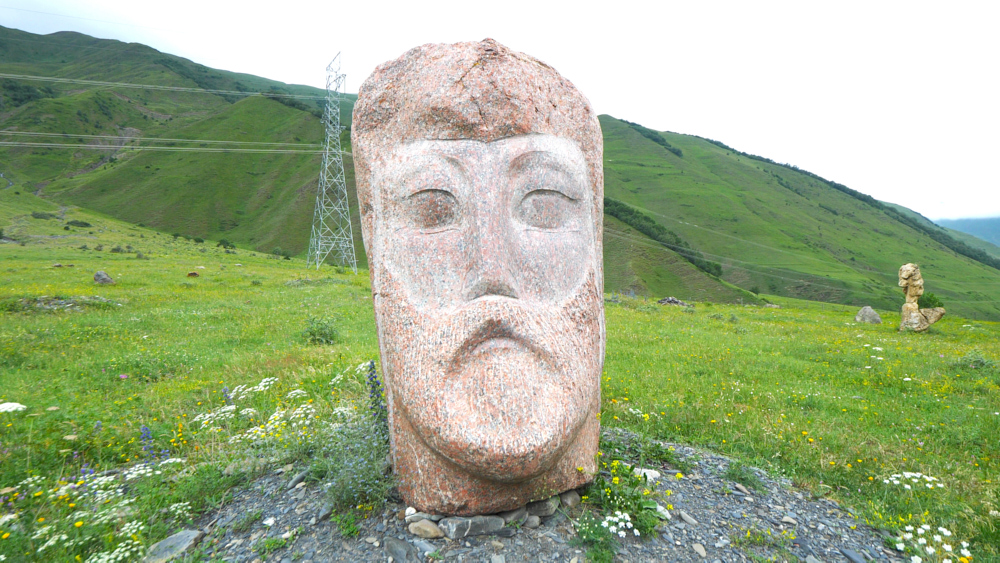 You can reach the church in a couple of different ways. By car is the easiest and quickest, as there’s a new road that spirals its way up the hill. But the more scenic and memorable is via a 60-90-minute hike from Stepantsminda.
Also, you can’t leave the church without taking some time to admire the view of Kasbegi in the distance. From the hilltop, you can see the town nestled in the valley far below. The gorgeous view alone is among the top things to do in Kasbegi, Georgia! 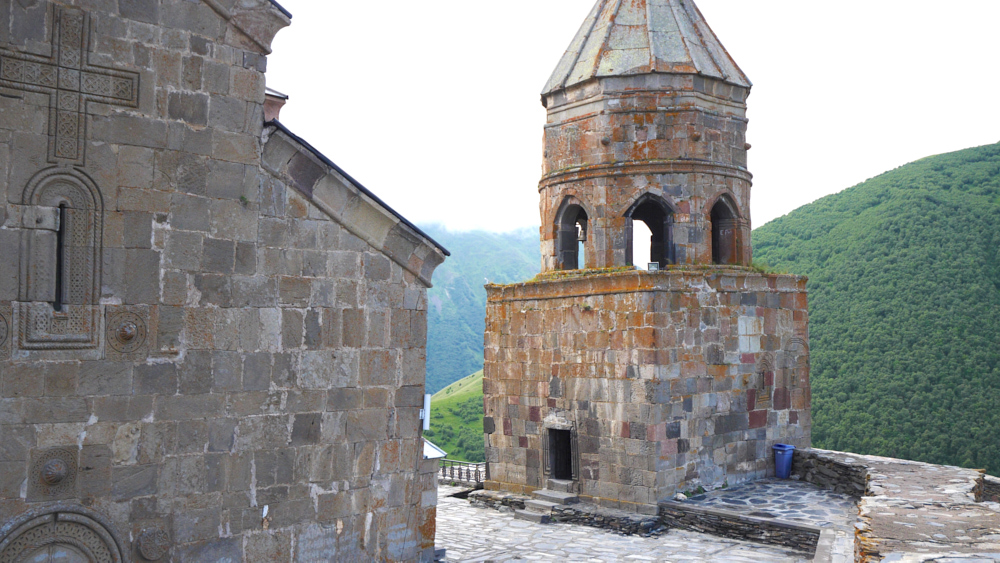 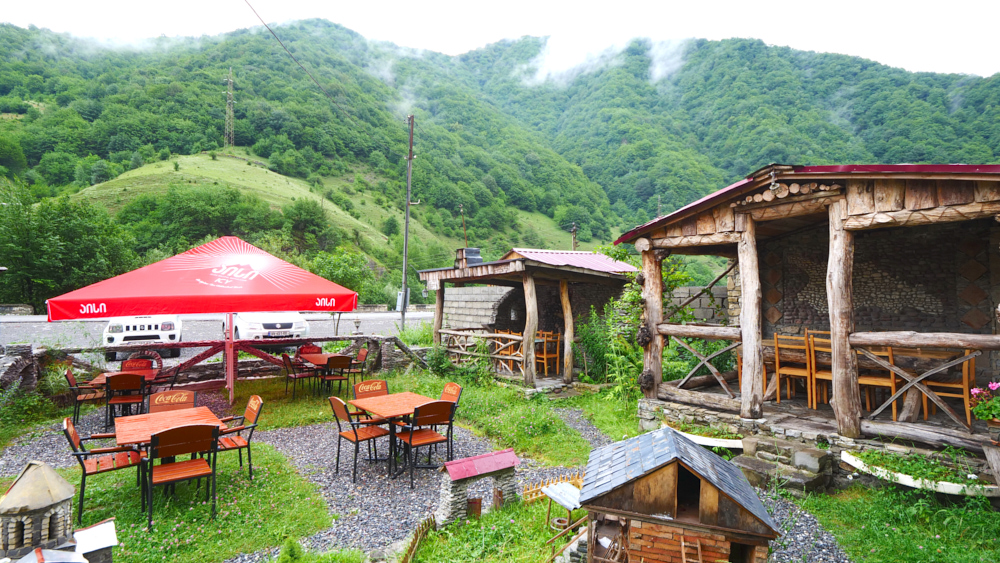 Visit the Birthplace of Khinkali

Travelers looking to explore some of the region’s history should start off at Ananuri. This old fortress stands along the Aragvi River and overlooks the shores of Lake Schinvali in the Dusheti Municipality. The oldest tower within this fortified castle dates back to the 14th century. Meanwhile, its two churches were built in the 17th and 18th centuries, respectively.
Finally, if you’re on a time crunch, it’s possible to explore this corner of northeastern Georgia in just 24 hours. During that time, I recommend staying at Alpenhaus Hotel in Kasbegi. It’s a beautiful, rustic 3-story hotel with twelve rooms and a restaurant. 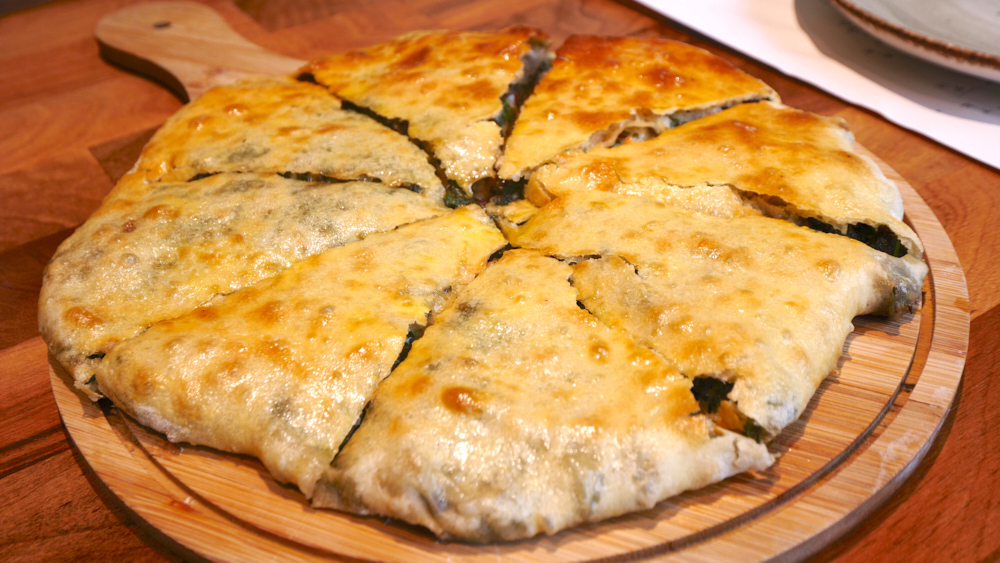 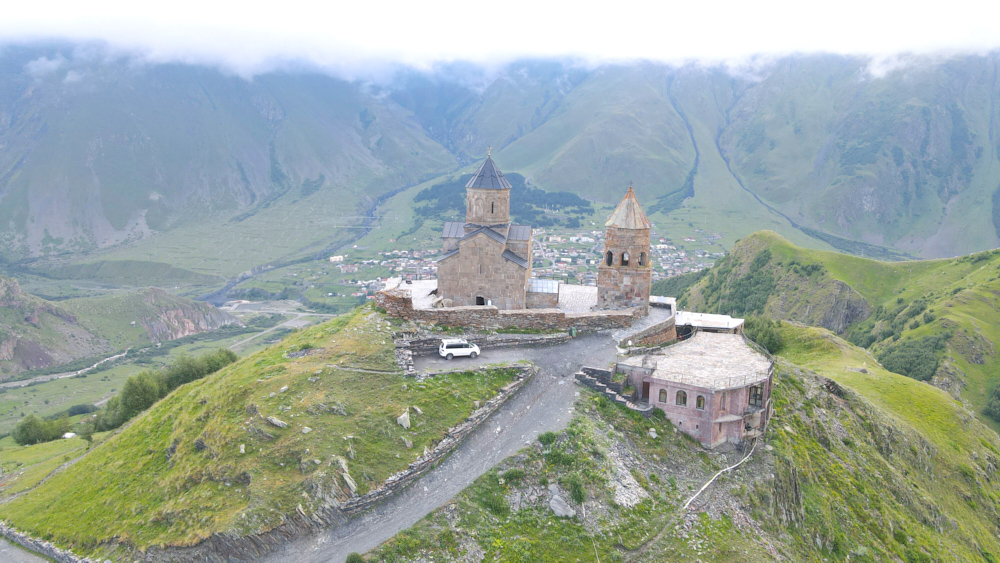 A twelve-minute drive along E117/ს3 and the Sno-Akhaltsikhe-Juta road will take you through a lush valley to the historic village of Sno. This village has a few notable sites and is also famous for its crisp and delicious water! 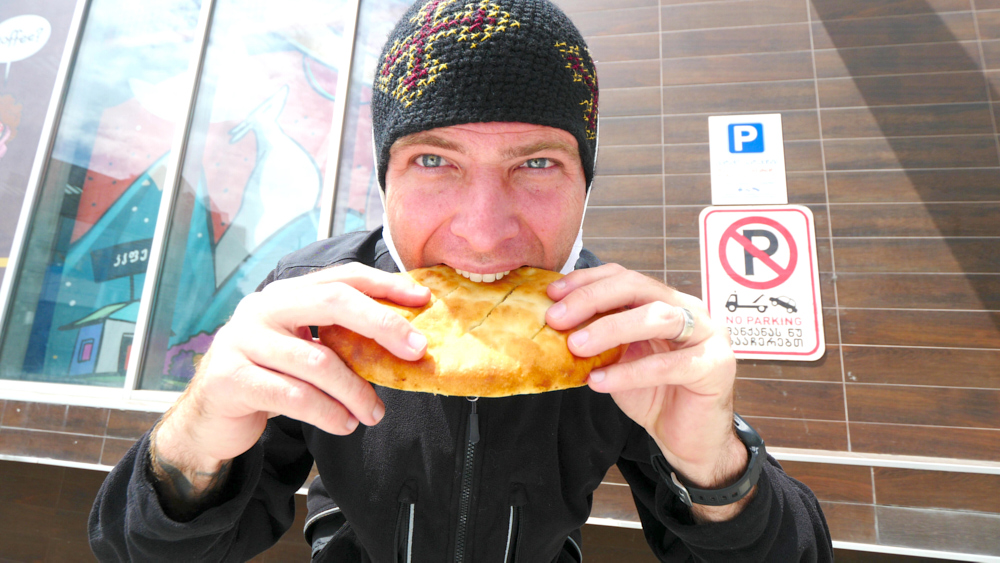 Similarly, the decor is very alpine, and you have your choice of three styles of rooms: a double, a triple, and a queen. For example, my room offered a queen-sized bed and a marvelous view of the mountains, including Mount Kazbeg. Also, at their bar, you can enjoy some chacha or cherry juice with the owners or fellow guests.
Today, Stepantsminda is among the most popular stops along the Georgian Military Highway. As a result, tourism has blossomed in the past two decades, transforming the sleepy village into a bona fide tourist destination. It’s especially popular among hikers and mountaineers looking to scale Mount Kazbek, a beautiful and misty mountain looming over the town.

Because of its location in the mountains, I highly recommend packing extra sweaters. I explored the region for roughly 24 hours with my friend Tim from Friendly GE in August of 2021. But even though it was deep in the summer months, it was still chilly!
The church’s location made it an ideal place to hide treasures during dangerous times, but the church itself is also stunning. The massive stones that make up its exterior are covered in stunning carvings. The inside of the church is also very dark and filled with candles and icons. Photography and filming are prohibited inside, and a strict dress code also must be followed inside. Men must wear long pants, while women must cover their heads. Thankfully, both are offered to visitors at the entrance. 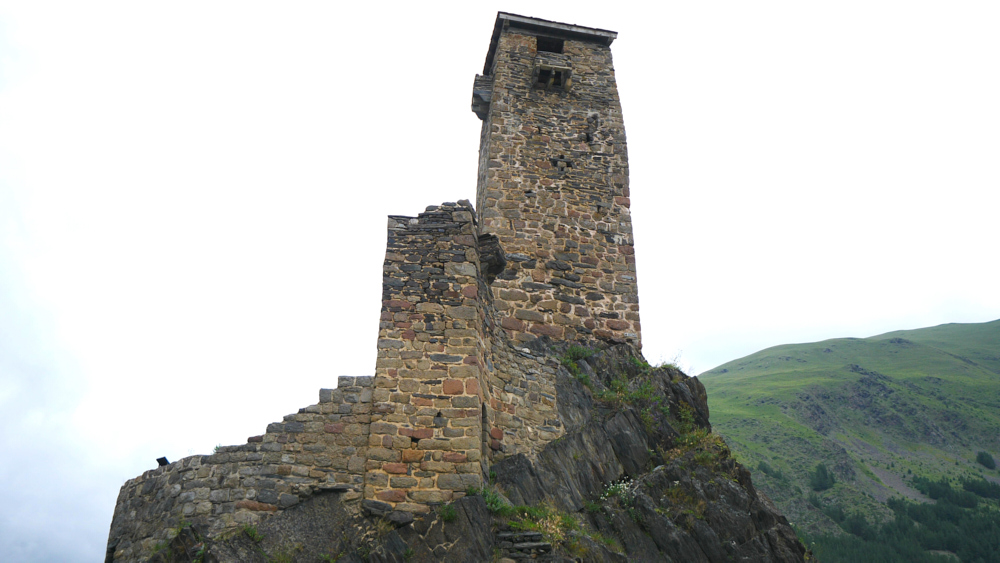 The outer walls of the 17th-century Church of the Mother of God are adorned with ornate carvings of figures, large crosses, and grapevines. The grapevines are a popular symbol throughout Georgia, as the country has been known for its winemaking culture for thousands of years.
Tucked away in the mountains of the Mtskheta-Mtianeti region in northeastern Georgia is the townlet of Stepantsminda. Formerly known as (and more commonly known as) Kasbegi or Kazbegi, this settlement is located along the Georgian Military Highway. This route winds its way through the Caucasus, linking Georgia to Russia just 12 kilometers to the north. And while this region is a bit off the beaten path, there are still plenty of things to do in Kasbegi, Georgia. 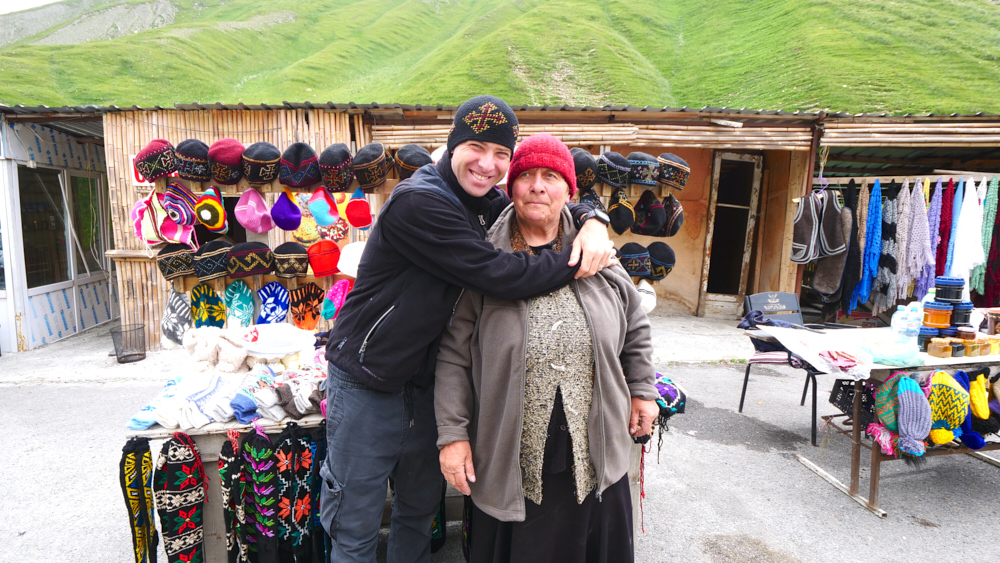 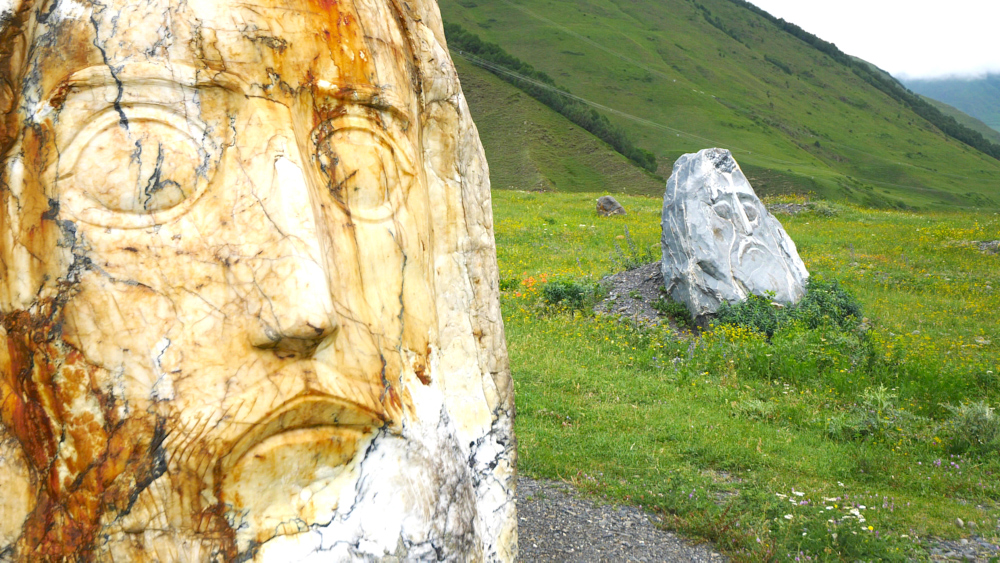 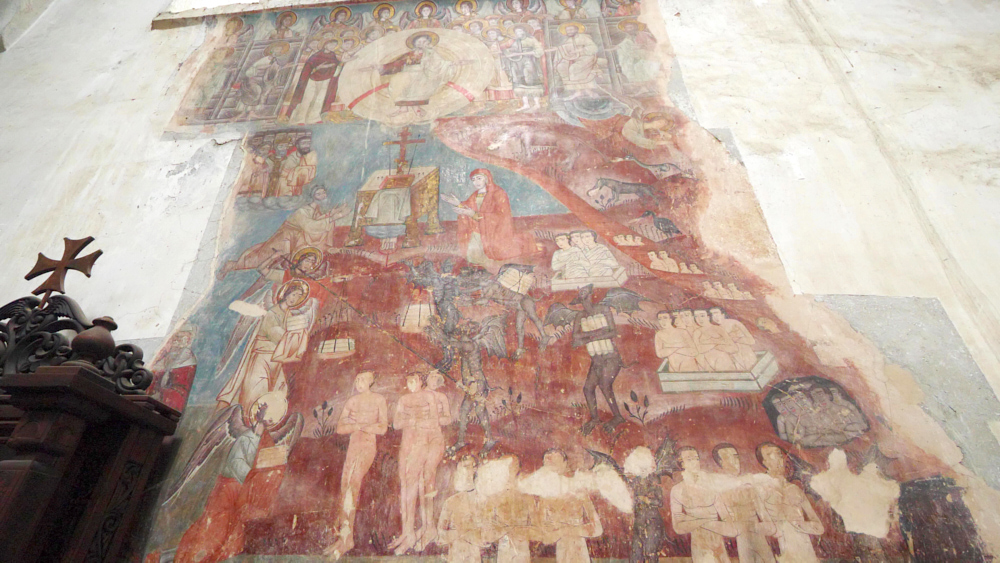 Grab a Quick Breakfast in Kasbegi 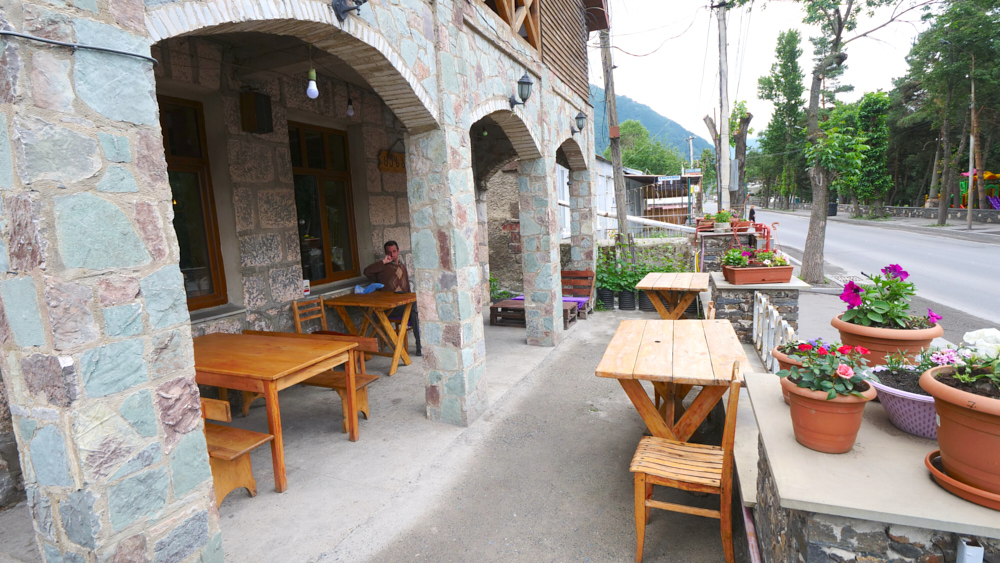 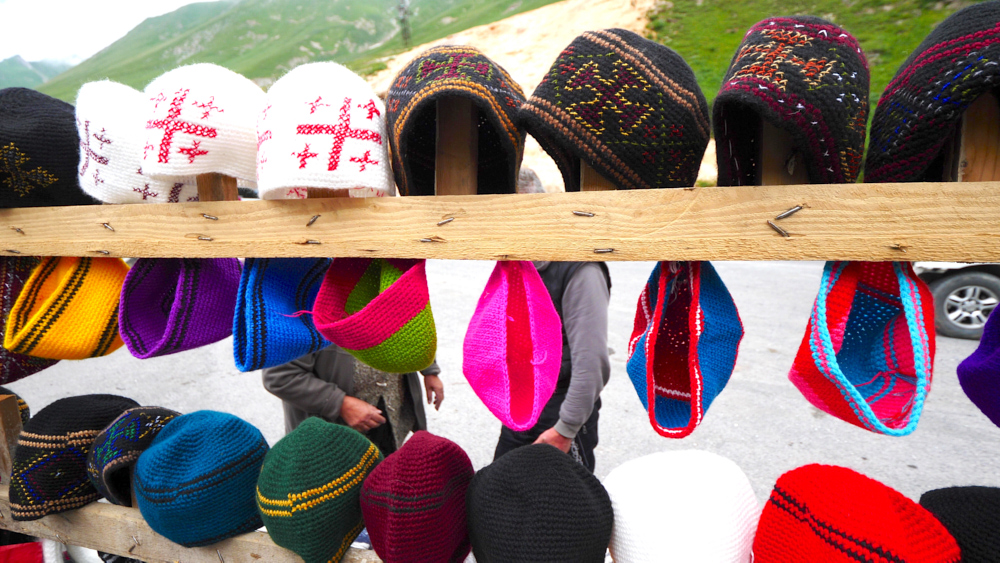 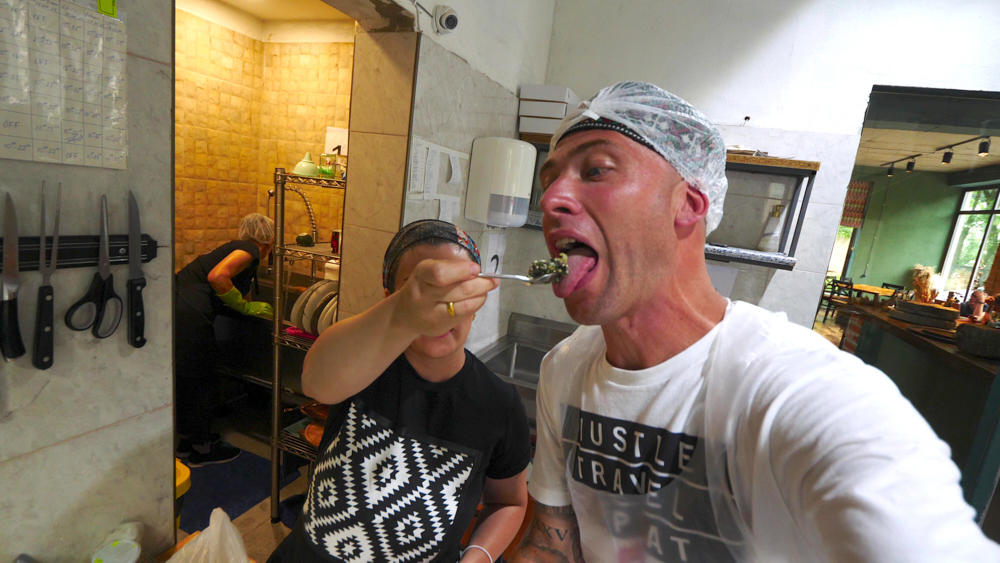 The monument stands on the edge of a stunning gorge at the Gudauri View Point, where you can enjoy an unparalleled look at your surroundings. If you’re more adventurous, they also offer horseback riding, ATVing, and paragliding!

Check out the Top Things to Do in Tbilisi, Georgia

Explore the Village of Sno

Easily one of the top things to do in Kasbegi, Georgia is visiting Holy Trinity Church. Also known as Gergeti Trinity Church and Tsminda Sameba Church, this 14th-century cross-cupola church stands atop a steep hill in the shadow of Mount Kazbek. It also stands on the remains of an ancient pagan temple.
The heads are fun and quirky and also come in a variety of colors and styles. They’re all incredibly detailed and reminded me of ancient heads I’d seen in Turkey. If you like what you see, there’s also a donation box for the sculptor nearby. In short, It’s easily one of the most unique things you can do in Kasbegi, Georgia!
I enjoyed it with an Osettian beet top and cheese pie, which was almost like an herbal stuffed pizza. The earthy flavor mixed with the cheese and beets was an unbeatable combination. Likewise, the khinkali and pie paired extremely well with a Black Lion American Pale Ale!
Once you reach Gudauri, I recommend visiting Smart Supermarket to grab a quick lunch. Their bakery sells lots of different breads and pies, but I suggest the lobiani. This crispy, fluffy pie comes stuffed with a spicy and garlicky bean paste and will only set you back GEL 3/! 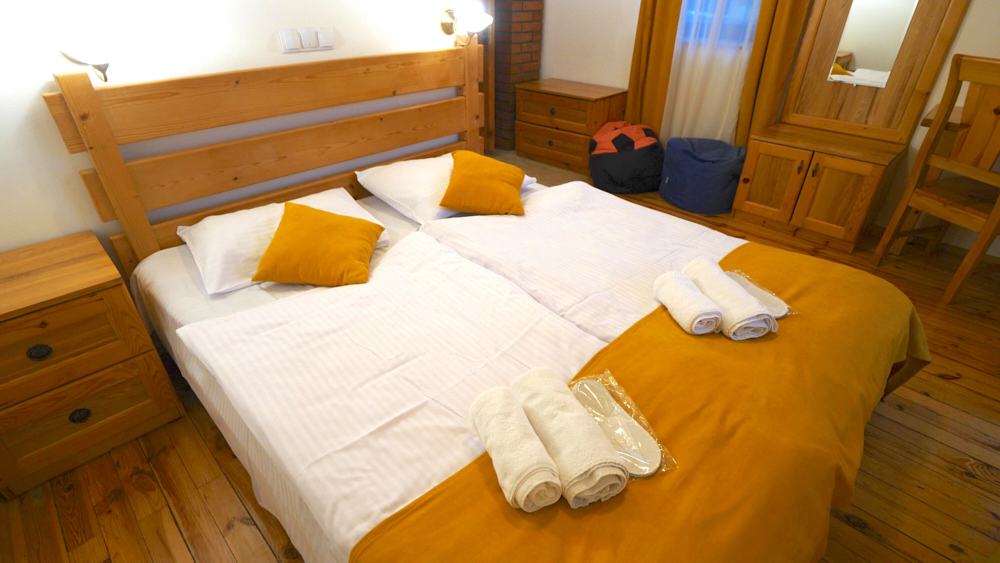 One of the top dishes in Georgia is khinkali. This pleated soup dumpling’s origins can be traced back to the Mongols of Central and Eastern Asia. They can contain a variety of fillings, including beef, pork, lamb, potatoes, and cheese. It is said that these savory morsels were invented in the nearby town of Pasanauri. The best place in Pasanauri to try them is a rustic but modern eatery called Guda Restaurant. 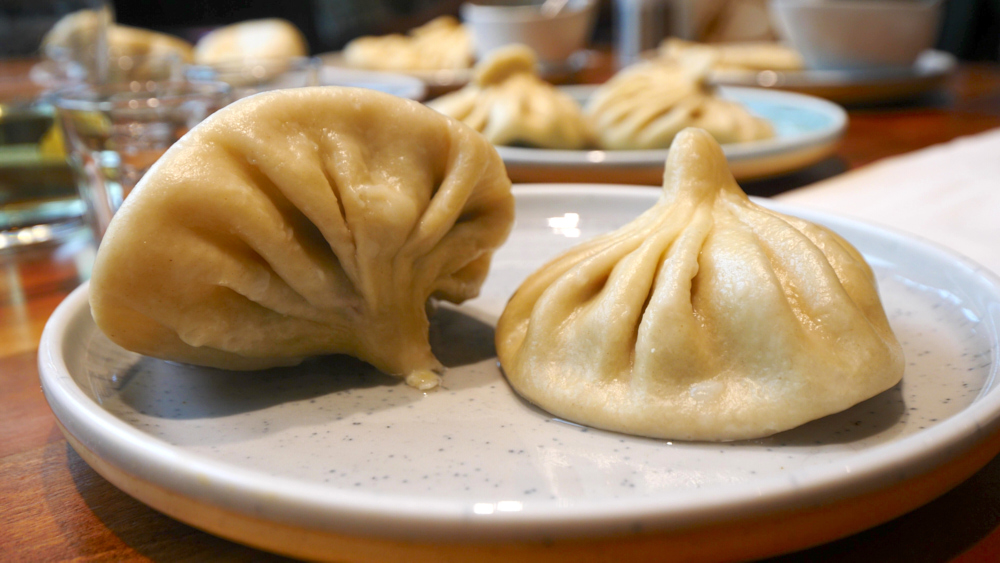 In conclusion, the sites around Kasbegi, Georgia, are among some of the most unique you’ll experience in the country. Every step here is an adventure that takes you deep into Georgia’s history, culture, or cuisine. I also couldn’t get enough of this place and its friendly people, who made me feel welcomed at every turn. Huge thanks also go out to my boy Tim for making it such a memorable experience for me. Book a trip today to experience the top things to do in Kasbegi, Georgia for yourself!

Make the Drive to Gudauri 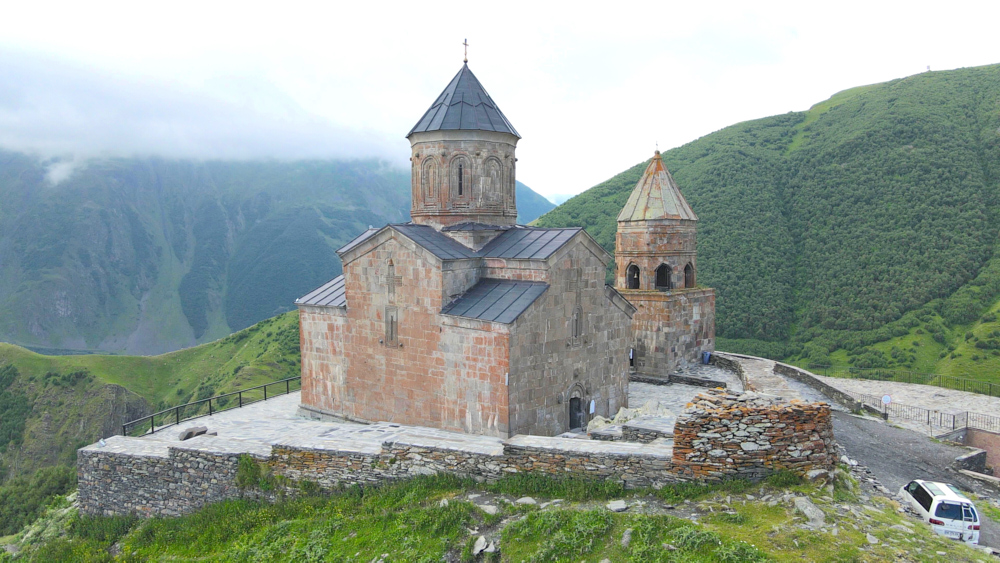 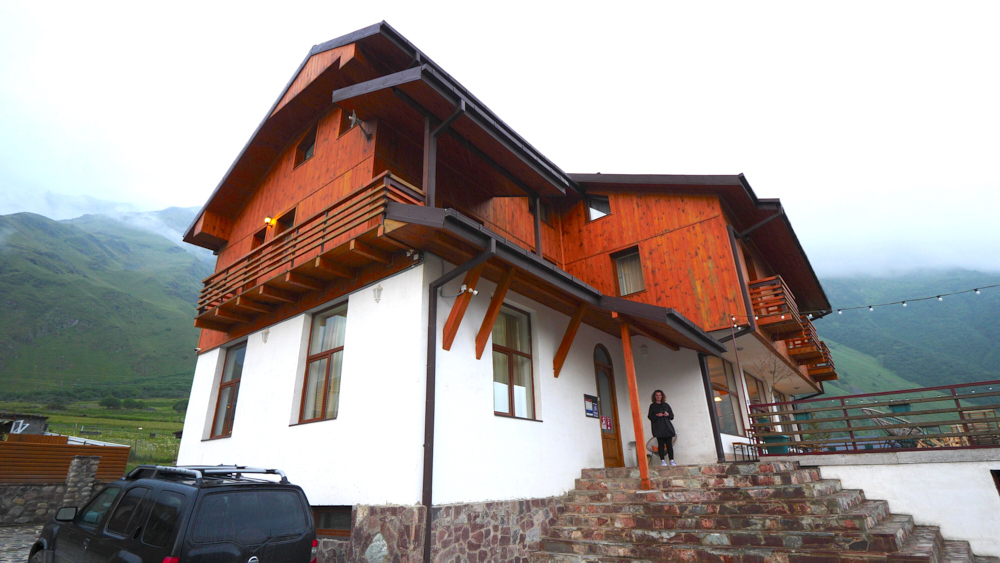 Making khinkali is somewhat of an artform in Georgia. For instance, the perfect khinkali has 19 pleats. I was also told that having less or more is considered unprofessional. The end result is a beautifully plump and pillowy dumpling that’s ready to be boiled. As I watched the cooks prepare the khinkali, one of them fed me a spoonful of the cheesy and herbal filling, which whetted my appetite for more! 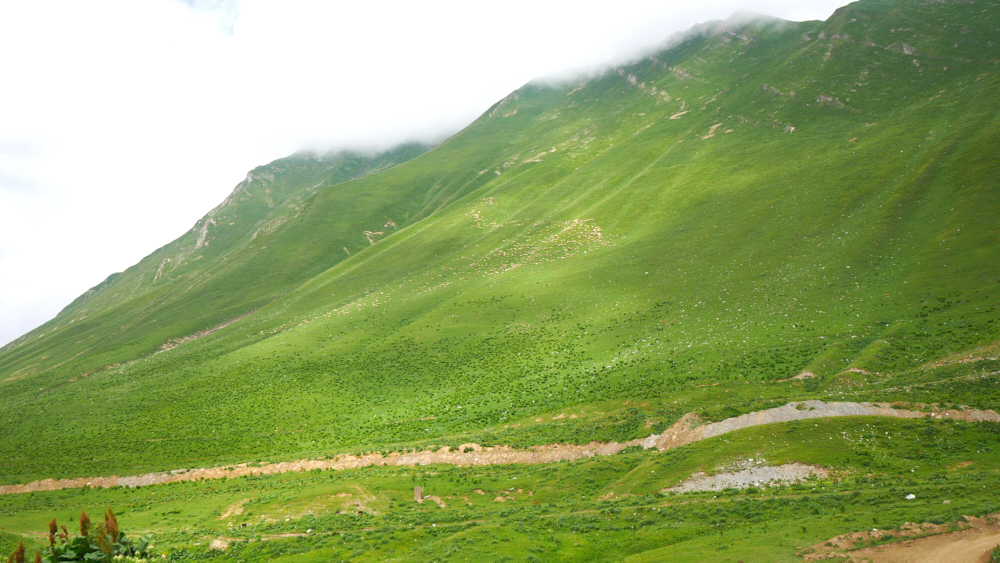 While Kasbegi regularly attracts nature lovers, the surrounding area is just as rich in culture and history. These are the top things to do in and around Kasbegi, Georgia.
Lastly, the other main site in town is Sno Castle. This partially-ruined medieval castle is inaccessible, but can be viewed from the ground. Its most prominent feature is its watchtower, which stands atop a craggy rock next to the Snostskali River. Villagers would defend Sno by dropping items on invaders from the tower’s windows! 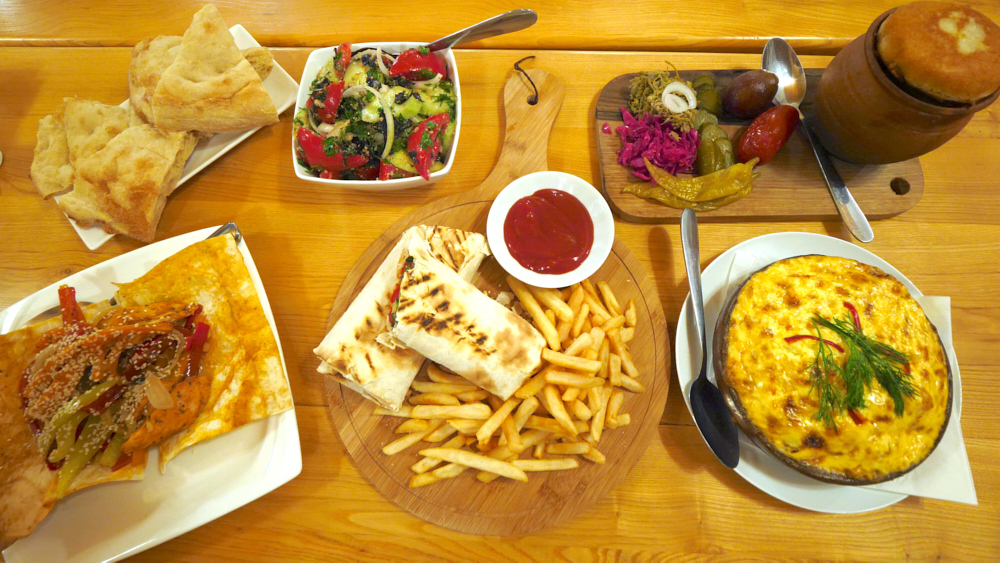 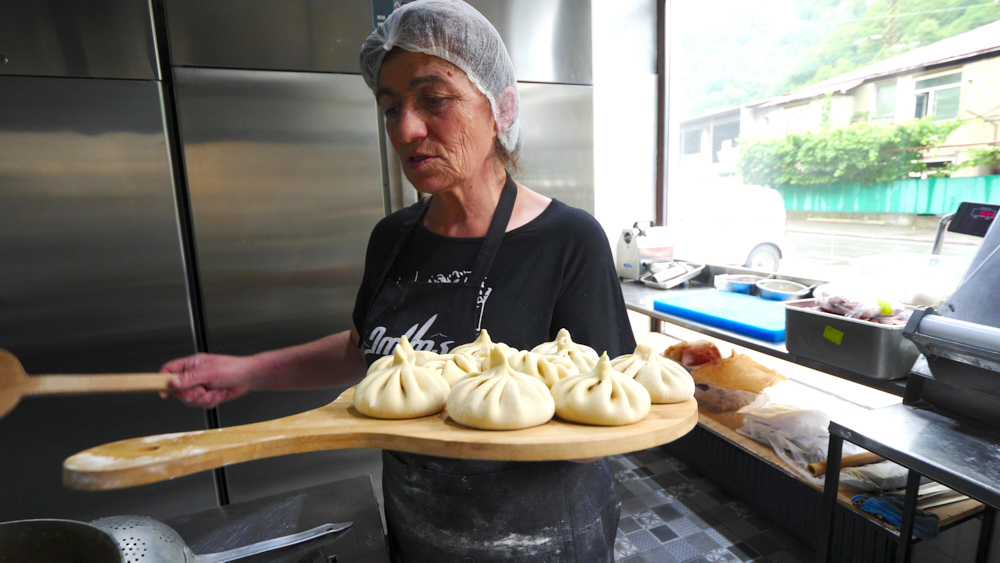 Near the town of Ganisi, you’ll find another market of vendors selling clothing, some delicious chestnut honey, and fruit. Also, just a stone’s throw from the market is the Russia-Georgia Friendship Monument. This colorful monument depicts the history between the two countries and dates back to 1983. Seeing it is one of the top things to do in Kasbegi, Georgia! 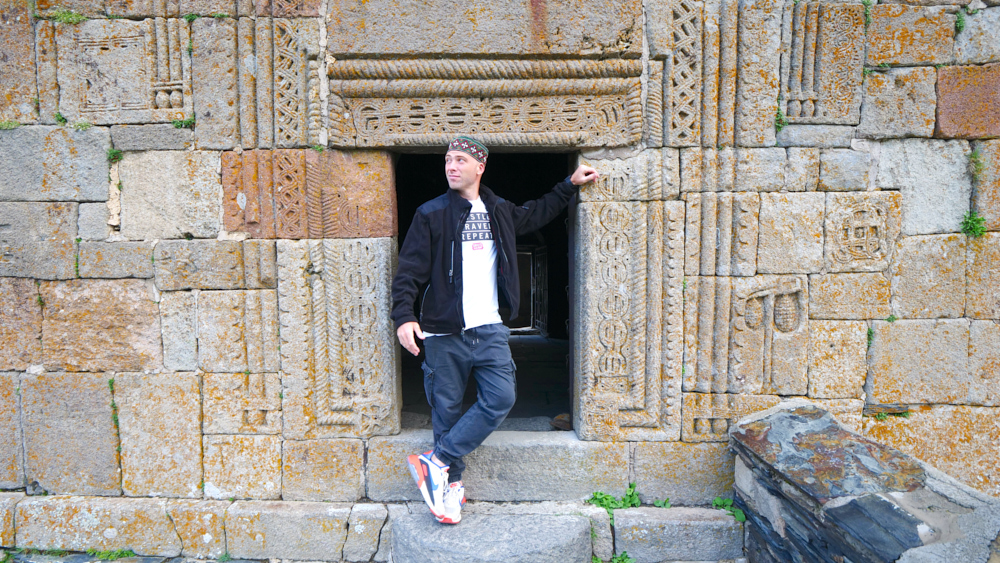 Check out my VIDEO: The Birthplace of Khinkali!! Making Georgian Soup Dumplings in Kasbegi, Georgia 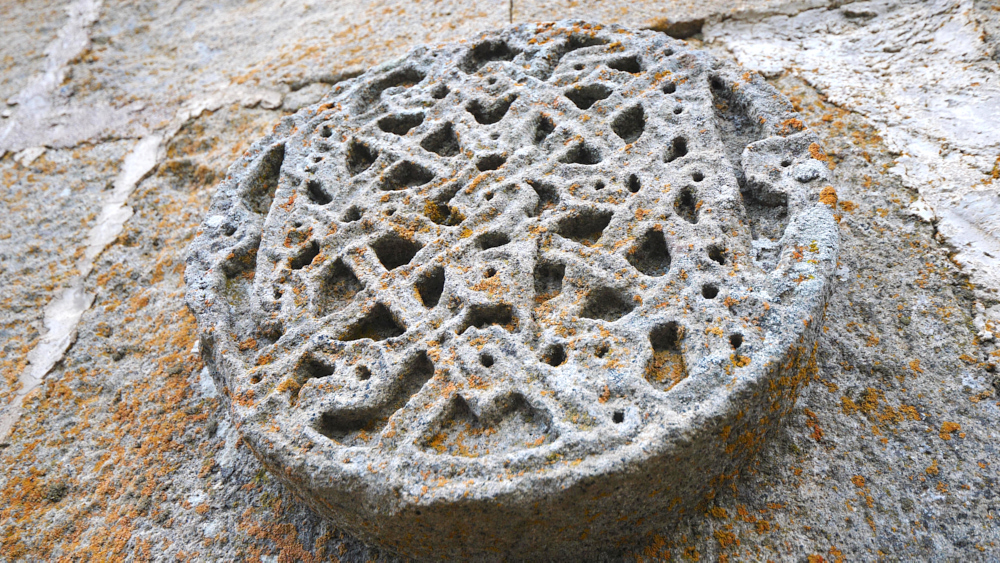 At the time that I visited Kasbegi, many of the local businesses were closed, but Tim and I were still able to explore a bit. One of the few open spots was an eatery where we met a man making tonis puri, a crispy, smoky bread made inside a clay tone oven. 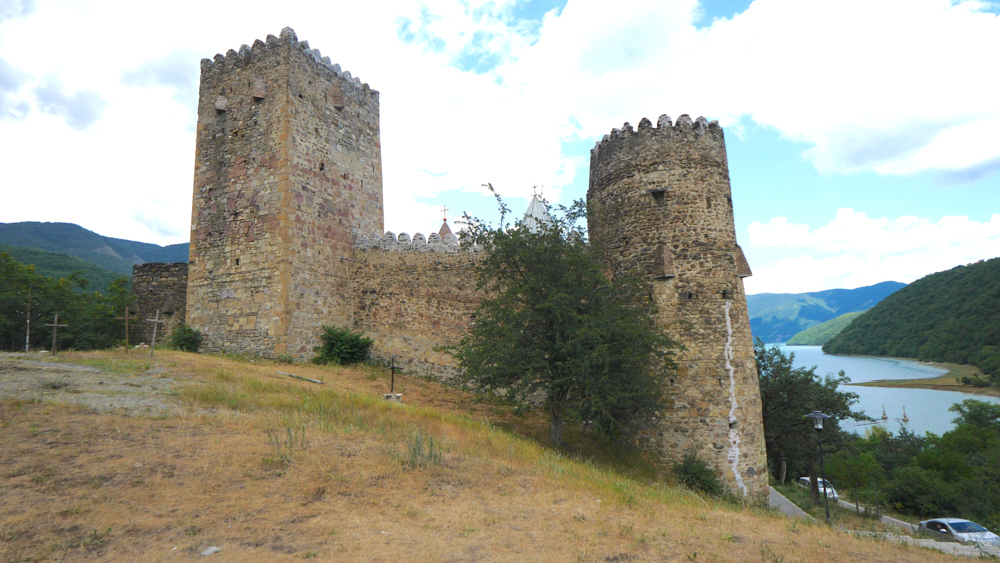 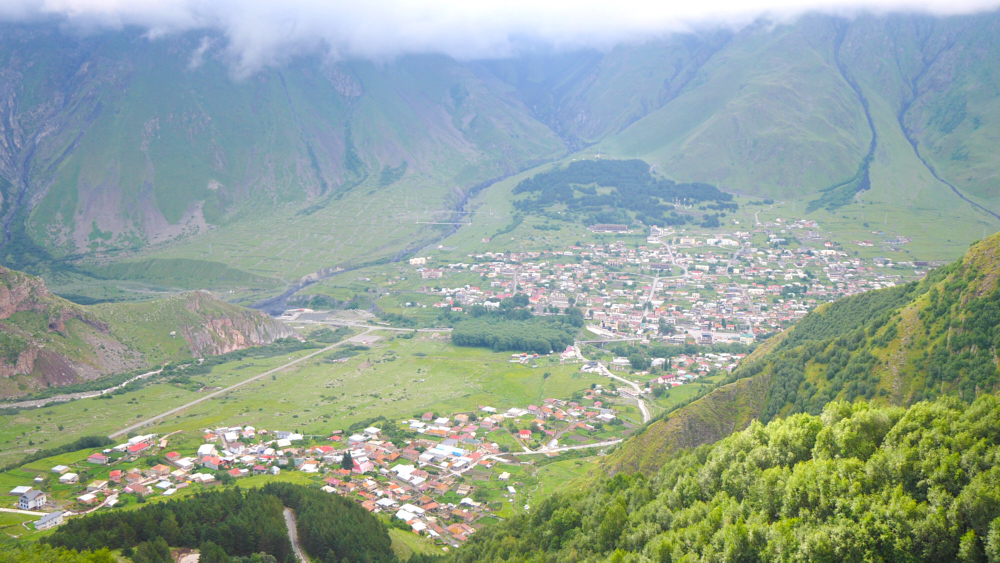 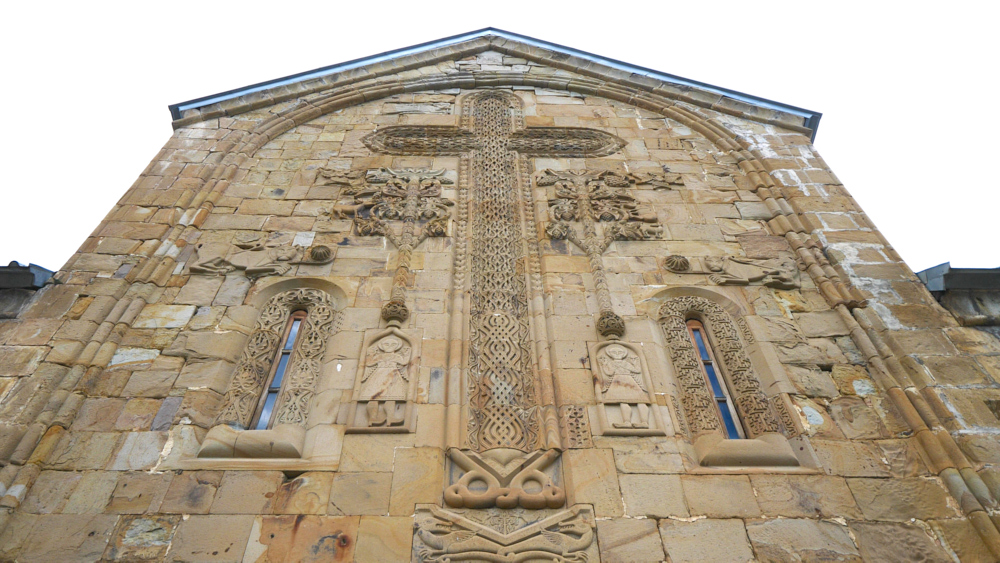 I loved the dinner I enjoyed there with Tim. The creamy and spicy lobio, or bean stew, was unbelievable and contained some crunchy walnuts. I also liked the mchadi (fried corn patty), tomato and cucumber salad, chicken wrap, creamy tava, and the chicken fajita. Each dish also contained walnuts, which are a staple in Georgian cuisine!

Firstly, not far from Sno is a mineral water spring, where mineral deposits have stained the rocks red. Nearby is a small market made up of handicraft vendors who sell handmade wool scarves and hats. The hats are only GEL 30/ USD each and are perfect if you don’t have one to keep you warm!
The drive from Sno to Gudauri is especially scenic, with dramatic, lush landscapes hugging the sides of the road. If you’re lucky, you may get to see little white specks traversing the mountainsides—shepherds herding their sheep!
The name Stepantsminda translates to “Saint Stephan,” a Georgian Orthodox monk who built a hermitage where the town now stands. In the early 19th century, people in the town and surrounding area resisted as Russia expanded its empire into Georgia. However, the local lord suppressed the locals’ revolt and became an officer in the Russian Army. He adopted the surname Kazbegi, which the town was also referred to as under his rule. The town’s name officially changed to Kazbegi under Soviet rule in 1925 but switched back to Stepantsminda in 2006.