Skip to content
Arriving at Maya Bay from the other side of the island.

Imagine over 200 boats and 5,000 people a day visiting Maya Bay and the consequences of the surge of interest and bad tourism practice. Coastline erosion and the destruction of coral reefs from boats docking and shoreline swimming.
Before Maya Bay closed, over 200 boats and 5,000 people visited the famed beach every day.
And when you found a moment where the coast was clear, you could stand there and imagine – if only for a few seconds – the pure, immaculate beauty this once was.
The emerald blue water no longer contained the sparkling mysteries of its submerged beauty but was flanked with a row of longboats floating idly. At the same time, the sands rapidly become covered with a scattering of feet, and the air fills with nothing but uncontrolled mayhem and the screams of boat captains.
Our boat to Maya Bay was too large to dock directly on the shoreline. Instead, we anchored a few meters further around the island, where we had to swim through the surge of waves to reach the spider-web of rope constructed to help pull ourselves in and up into this stunning hideaway. 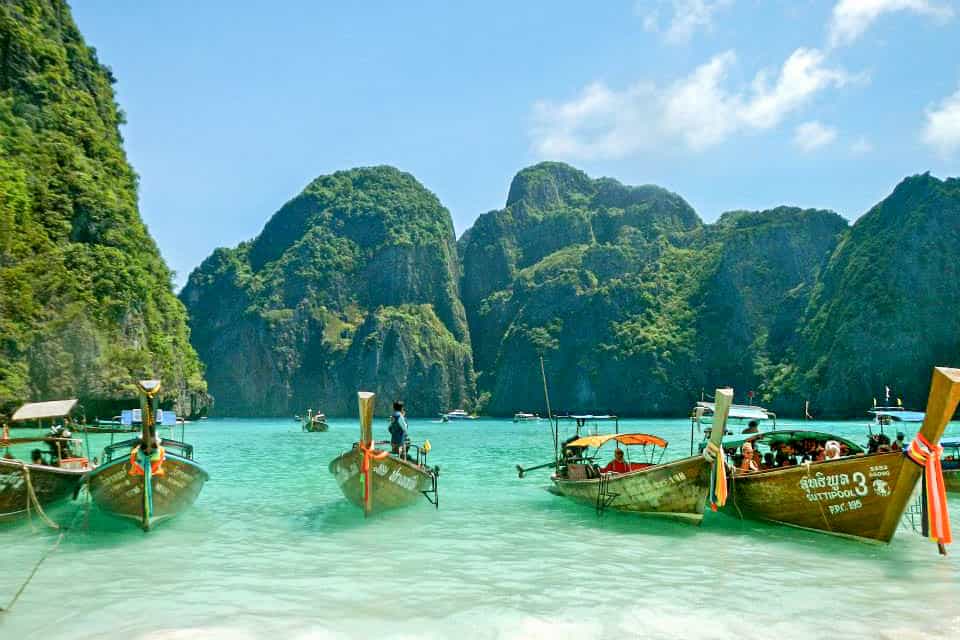 Maya Bay found global fame as the film set for The Beach – a blockbuster screenplay based on Alex Garland’s novel of the same name. A story I too wanted to seek out as a traveller, despite knowing the consequences that its fame had brought.

The beach movie identified the joys of a secluded haven. In reality, the ‘beach from the beach’ became a victim of its fame, with the closing of Maya Bay in 2018 highlighting the imploding nature of over-tourism.
Garbage and sunscreen polluted the water, destroying a huge part of the ecosystem that makes this area so naturally stunning.
All from a tourist drive that stemmed from a single question from most visitors to Koh Phi Phi: “Where’s the beach?”. 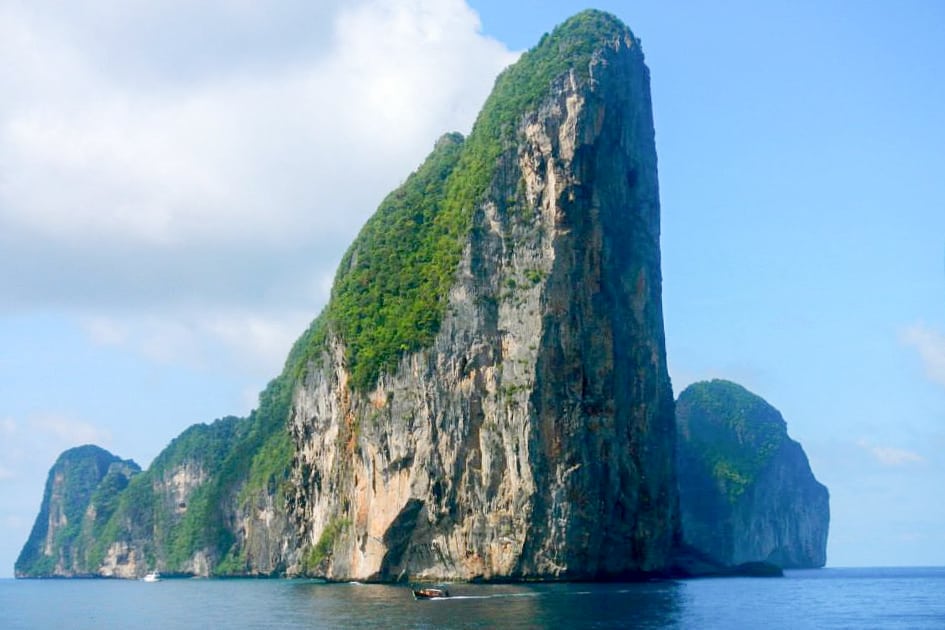 What Happened to Maya Bay?

“You fish, swim, eat, laze around, and everyone’s so friendly. It’s such simple stuff, but… If I could stop the world and restart life, put the clock back, I think I’d restart it like this. For everyone.” – Alex Garland, The Beach.
Before Maya Bay reopened, there was little infrastructure to deal with the footfall of people passing through Koh Phi Phi Leh island to get to the beach. 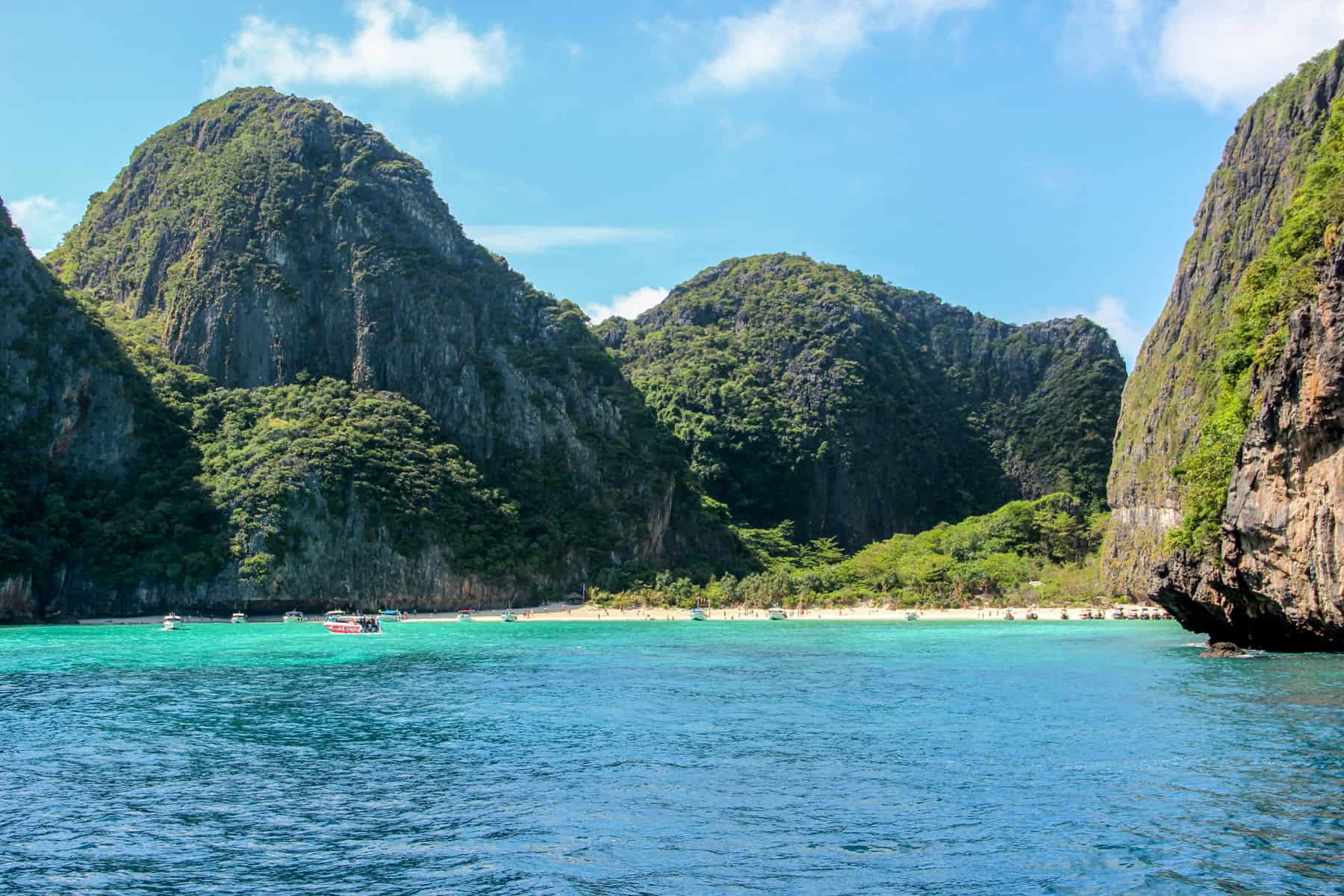 READ MORE: A Quick Guide to the Best Thailand Islands to Explore.

Overcrowding at Maya Bay and the destruction of the environment eventually led to its closure in 2018.
The hundreds of boats that arrived at Maya Bay every day dropped off tourists who multiplied by the dozens as the wooden vessels floated in. An intense build-up of crowds would push past you in excited curiosity, as if they were expecting Leonardo DiCaprio to jump off the cliff ridge shouting, “I’ve found it!”. Except everyone had found it.
Here’s to a regenerative future for Maya Bay and the positive footprint we can make when we revisit Thailand’s world-famous beach.
Imagine a stunning beach cove located 30 minutes away from a populated island. A cove whose crystal blue waters are almost glowing, the sand silky soft under your feet, the surrounding cliff faces beautifully dominant in a protective hug and where the surrounding choppy waters protect the enclave from human invaders.
Welcome to Maya Bay on Ko Phi Phi Leh, a pocket of paradise on the coastline of Koh Phi Phi Leh island – the smaller sister island of Thailand’s sun, surf and snorkel haven of Koh Phi Phi.
Heavily marketed as a single trip or as a small part of an all-day boat cruise around the islands, the popularity of Maya Bay will never, ever dwindle. Especially now that Maya Bay’s reopening puts it firmly back on the sightseeing circuit.
For many, the trip to Maya Bay was all about trying hard to get their best snap on Thailand’s most famous bay. Many were completely unaware of where they were, what spectacle of nature they were standing in. This scenario, to me, was what summed up the Maya Bay setting perfectly. The chance to get that bucket list picture, and nothing else. 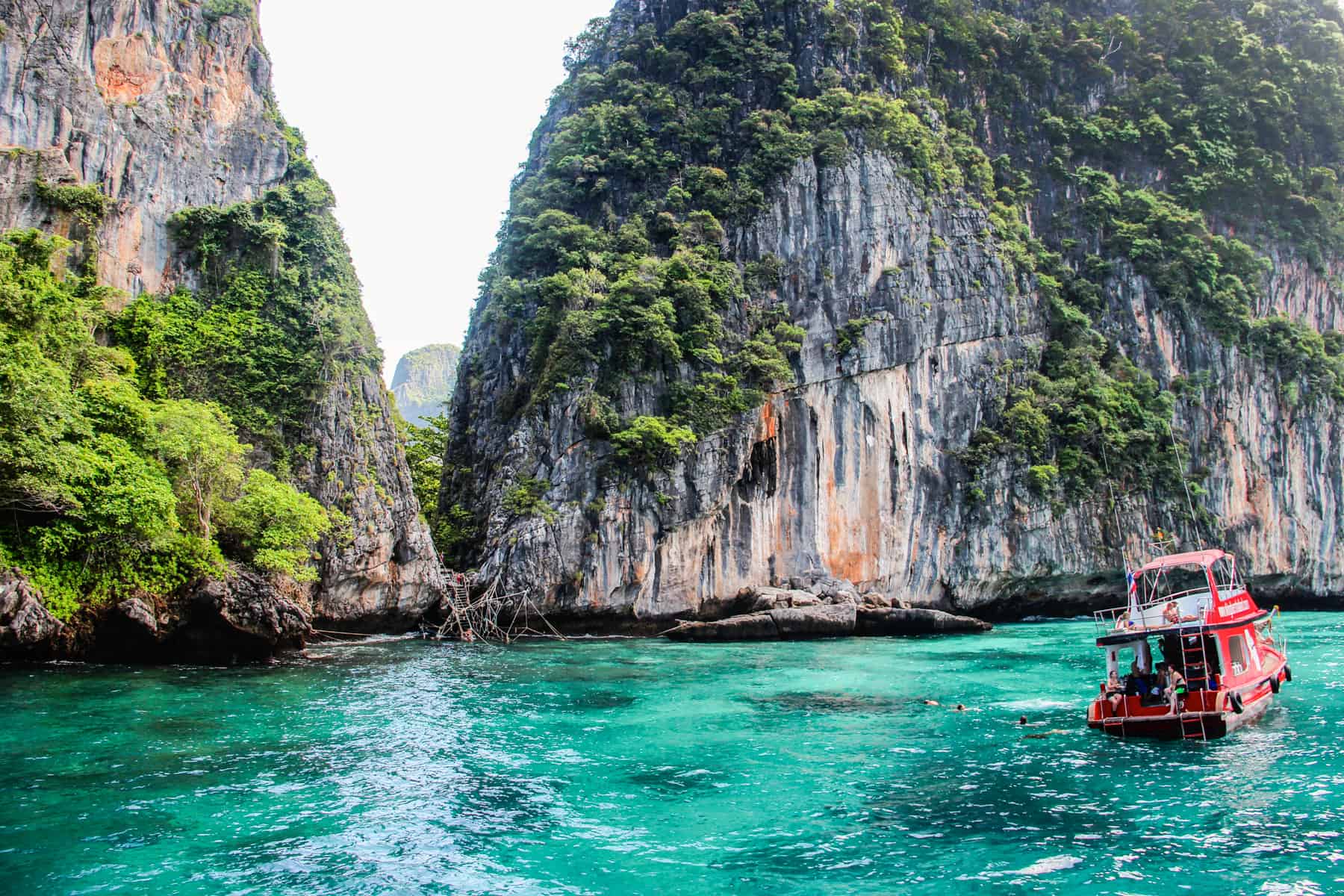 Some boats would dock on the other side of Maya Bay, where visitors would have to scramble to land. 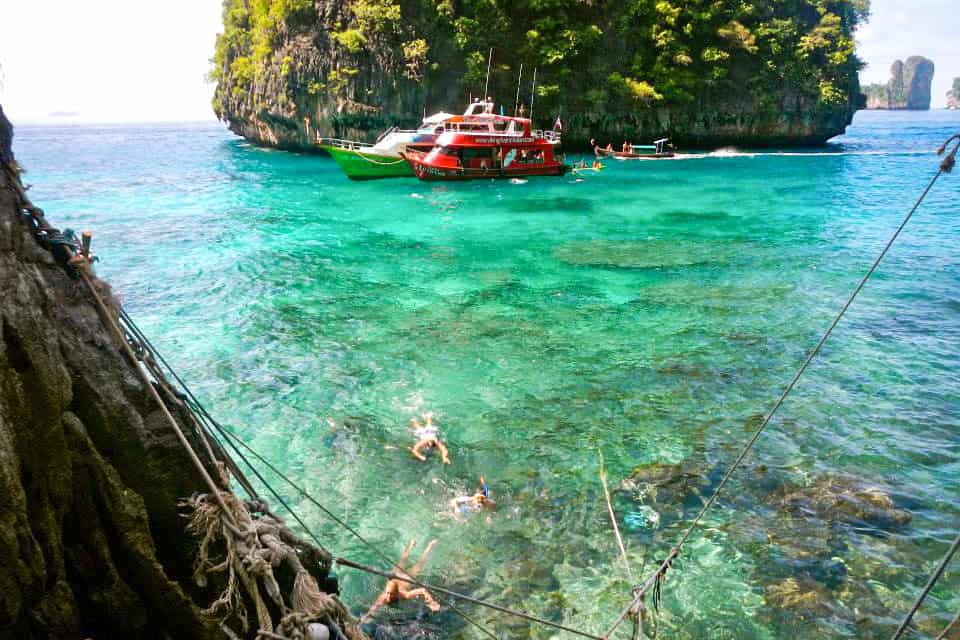 As Maya Bay reopens, new rules are now in place, with responsible measures to regenerate the environment.

The magnificent and once secluded Maya Bay at Koh Phi Phi Leh, Thailand
Those tranquil scenes from the Beach movie immediately shattered on dry land. I never expected to get lucky visiting Maya Bay in its undiscovered, immaculate form. Besides, I was just the same as every other tourist landing there, impacting the landscape with every trudge through the jungle and swim in the sea. 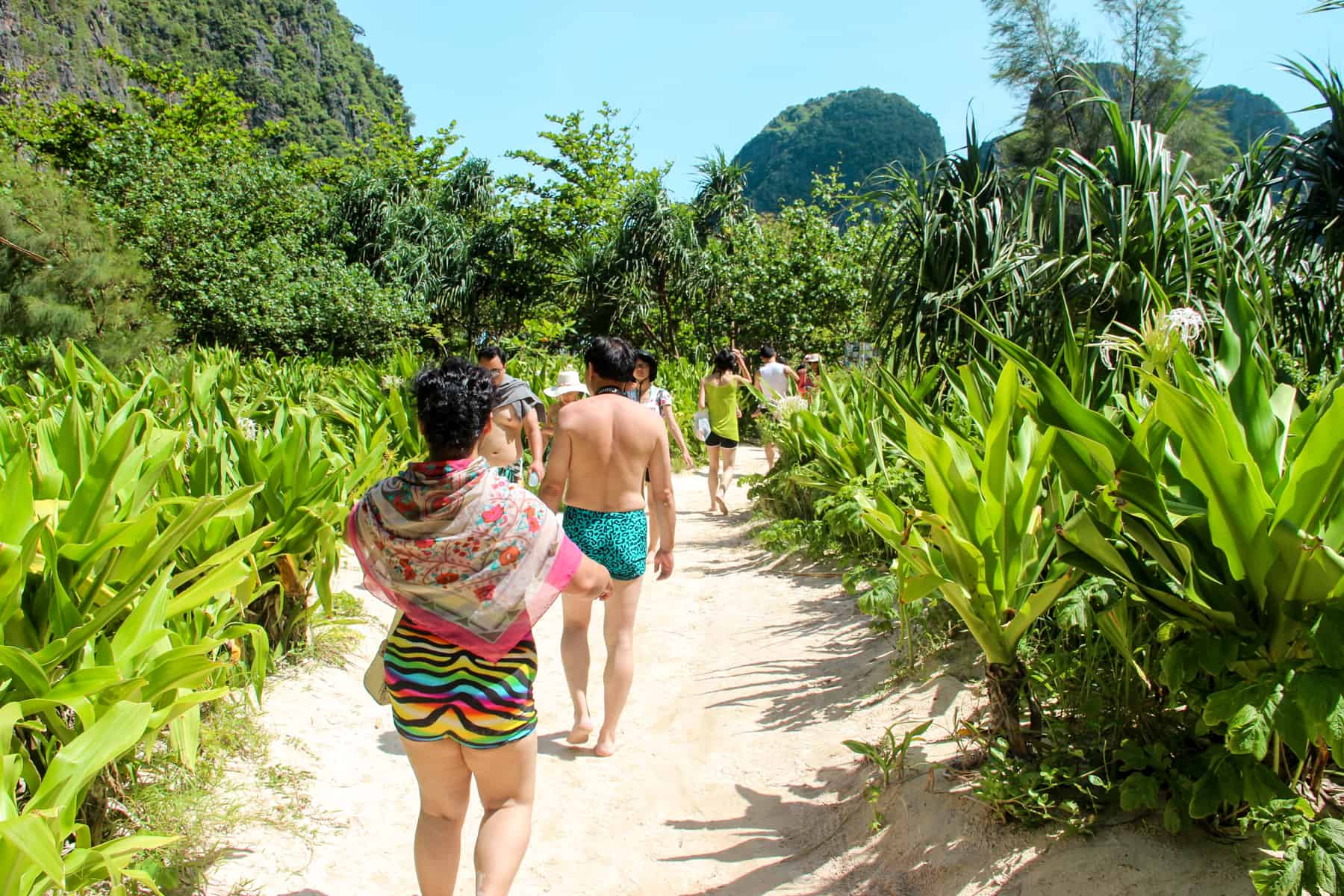 However, the most famous beach in Thailand reopened to the public on 1st January 2022, with new measures in place to protect it. 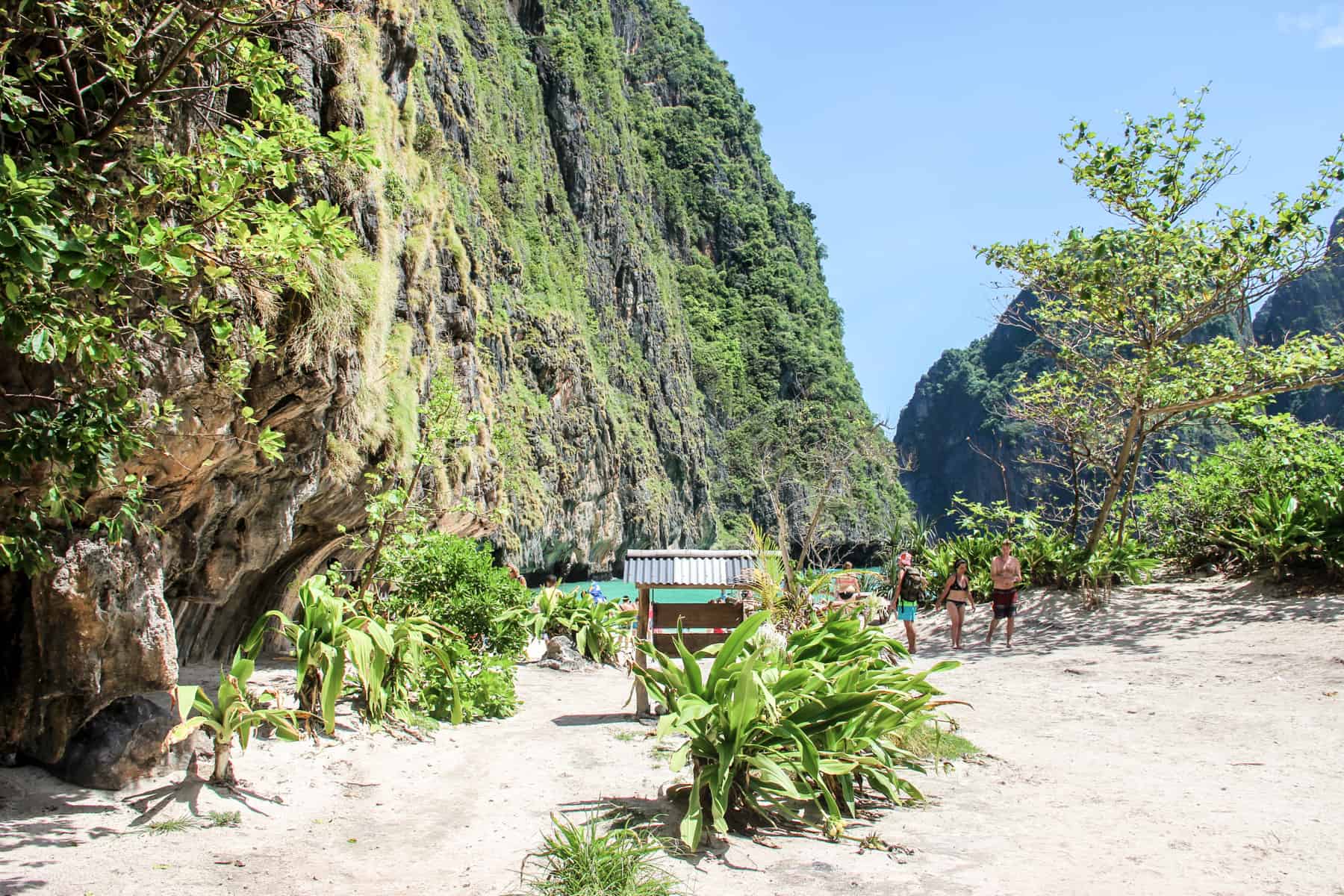 It was incredible, yet ruined, spectacular but over-crowded; it was almost impossible to see Maya Bay in its natural state unless you were fortunate many years ago. 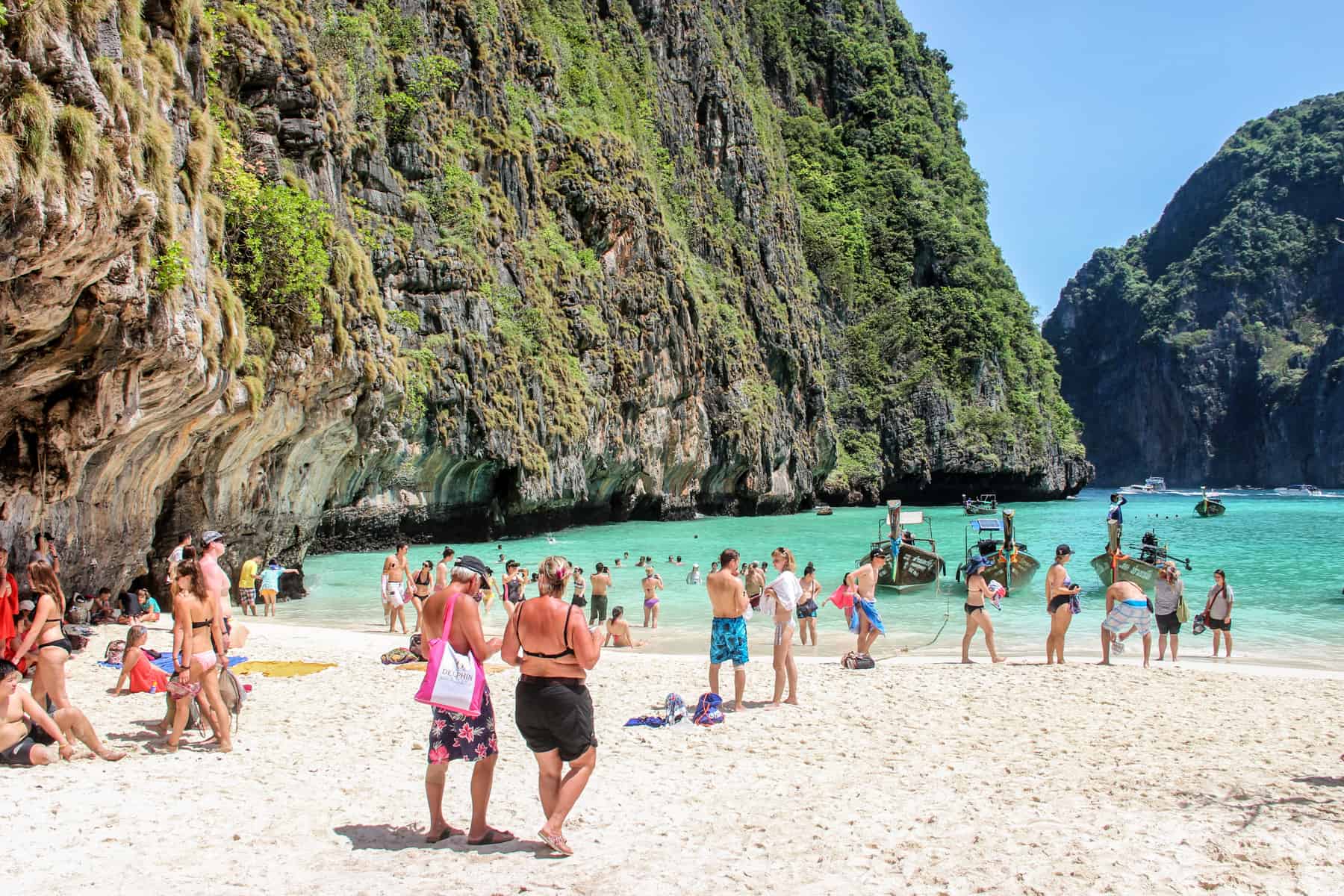 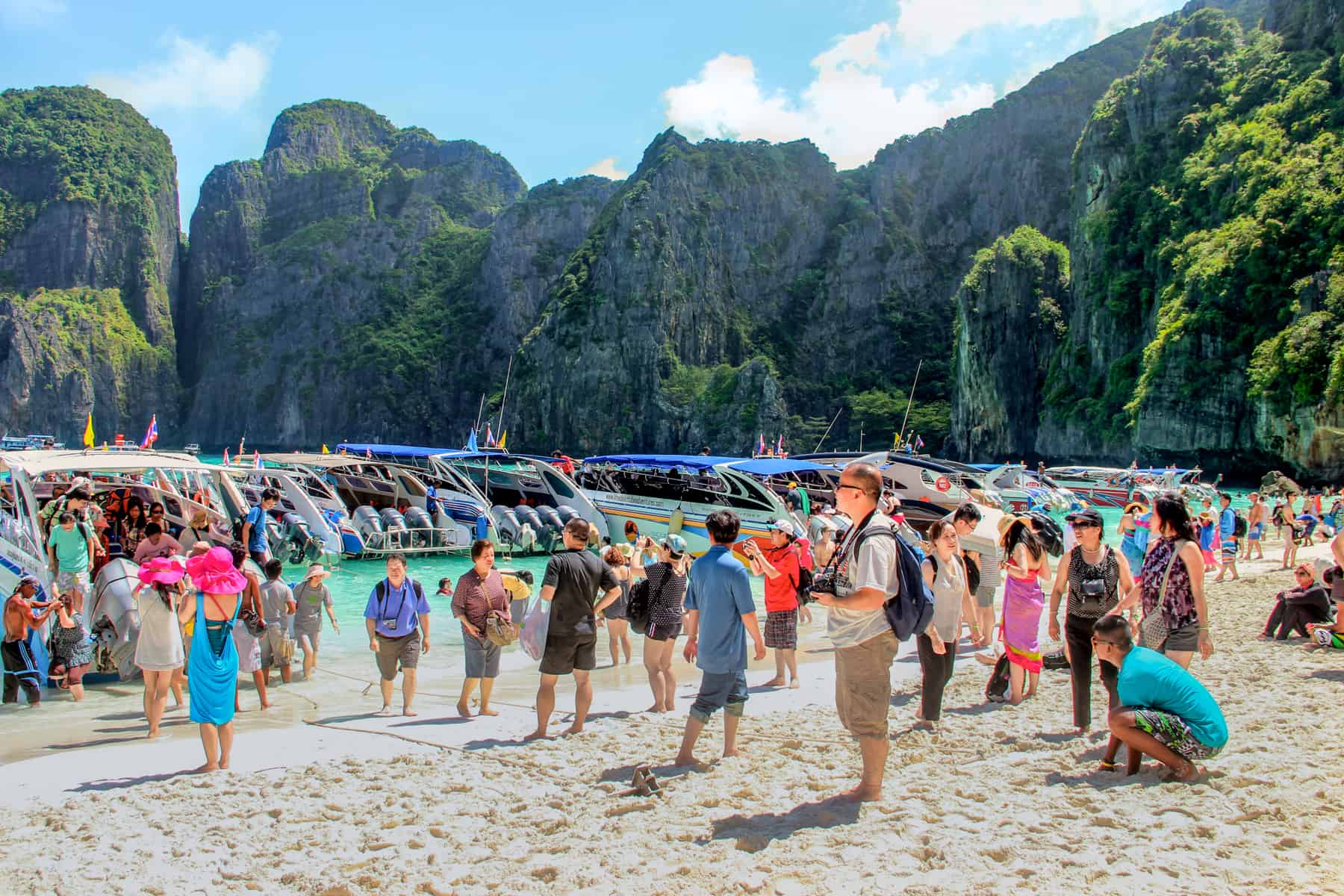 Before Maya Bay closed for nearly four years, there was no limit on visitor numbers.

Travellers swim to the hideout of Maya Bay the Beach on Koh Phi Phi Leh island. 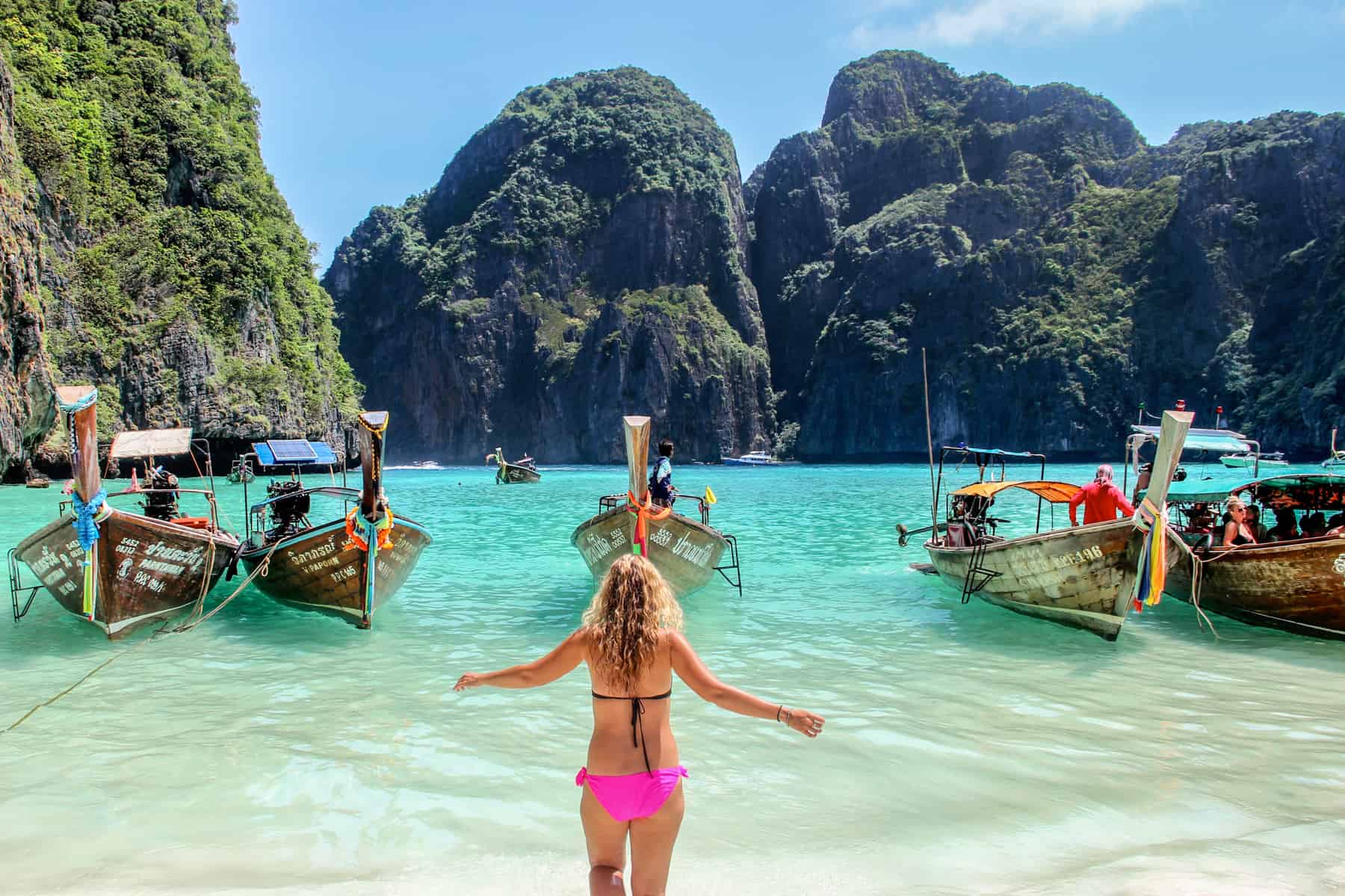 Where was The Beach filmed? In the once pristine enclave of Maya Bay – a secluded beach cove close to Koh Phi Phi island in Thailand. Here’s how over-tourism caused its near four-year closure and what new measures are in place for Maya Bay’s reopening and long-term protection.

New Rules for the Reopening of Maya Bay

In three and a half years of closure, experts have had time to replant trees to help limit coastal erosion and replant coral to revive sea life in the waters. To avoid losing this revitalisation and revert to the previous eco-disaster, new rules for Maya Bay visits have been imposed by local authorities to ensure the best environmental practice is in place for the coming tourist footfall.

The shoreline of Maya Bay prior to 2018. 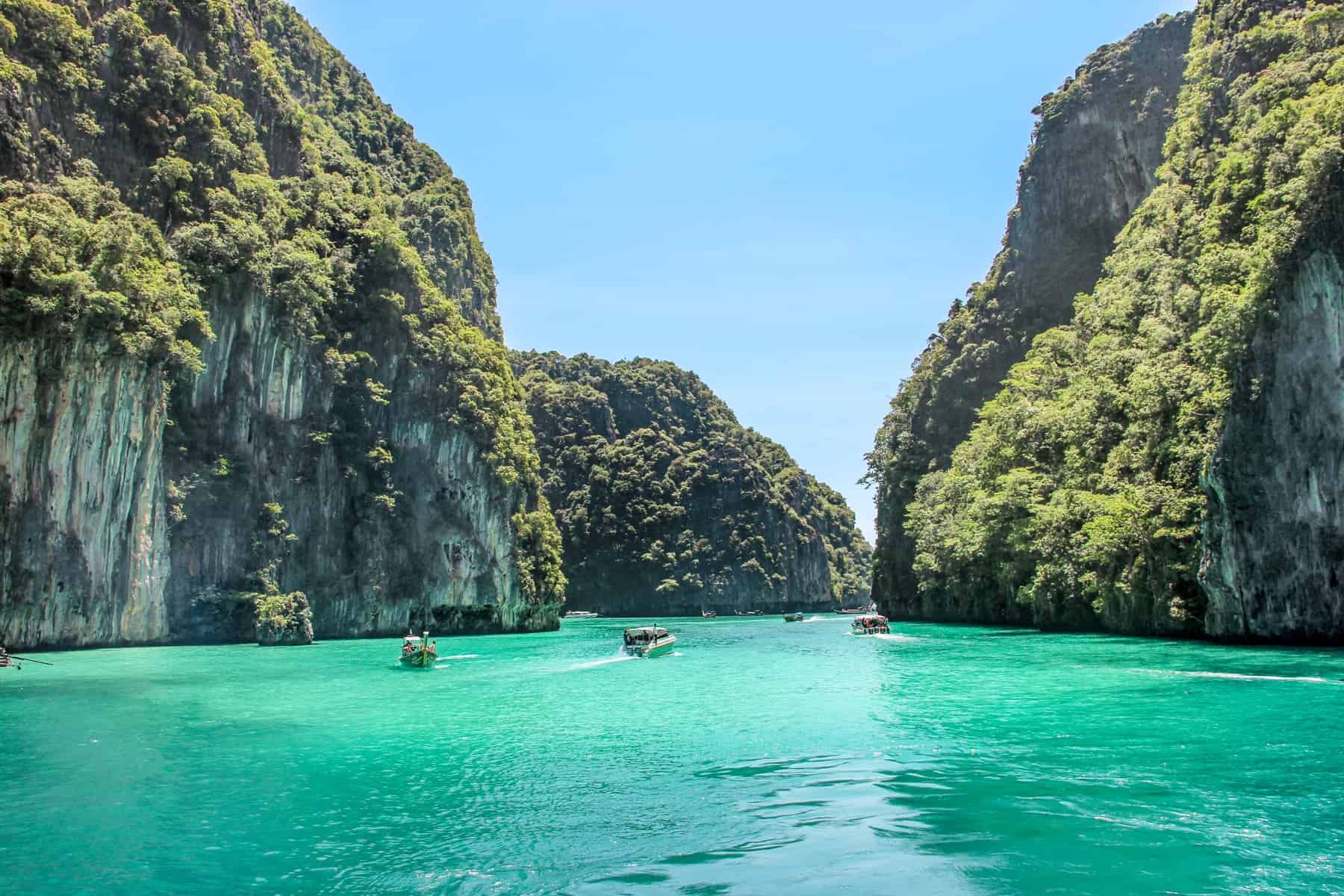 Visiting The Beach movie location may not be the paradise you think. It was initially closed in June-September 2018 to allow its coral reefs and environment to recover from over-tourism. Then, Thailand’s Department of National Parks, Wildlife and Plant Conservation announced in October that it would remain closed indefinitely to allow the beach and ecosystem to recover.

Travel to Maya Bay was accessible via the advertised boat trips available to book on Koh Phi Phi. Half days trips to Koh Phi Phi Leh started from 400 Baht. All-day tours, which included a stop at “the beach from The Beach”, ranged from 700 Baht upwards.
It was disappointing at the same time as being expected, and a shame that tourist numbers were uncapped and uncontrolled back then.