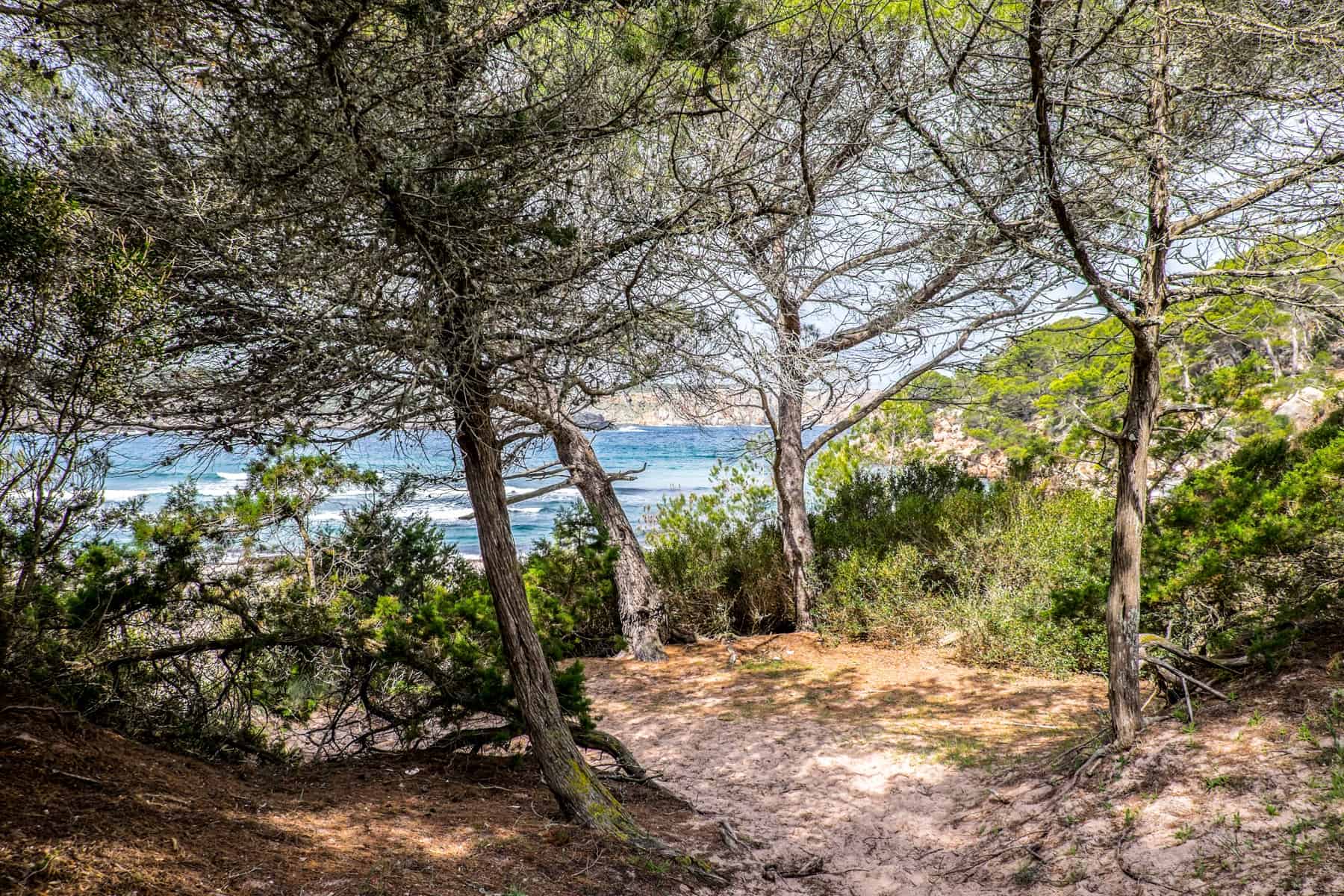 I found the most solace exploring this path by foot, where I could stop and really absorb the environment as it changed colour and texture. Menorca prides itself on being a slow destination and finding harmony with nature, with the Cami de Cavalls reflecting exactly this mindset.
There are 21 clearly marked cycle routes on the Cami de Cavalls and the loop itself attracts hardcore trail runners who take part in the 360º races annually. 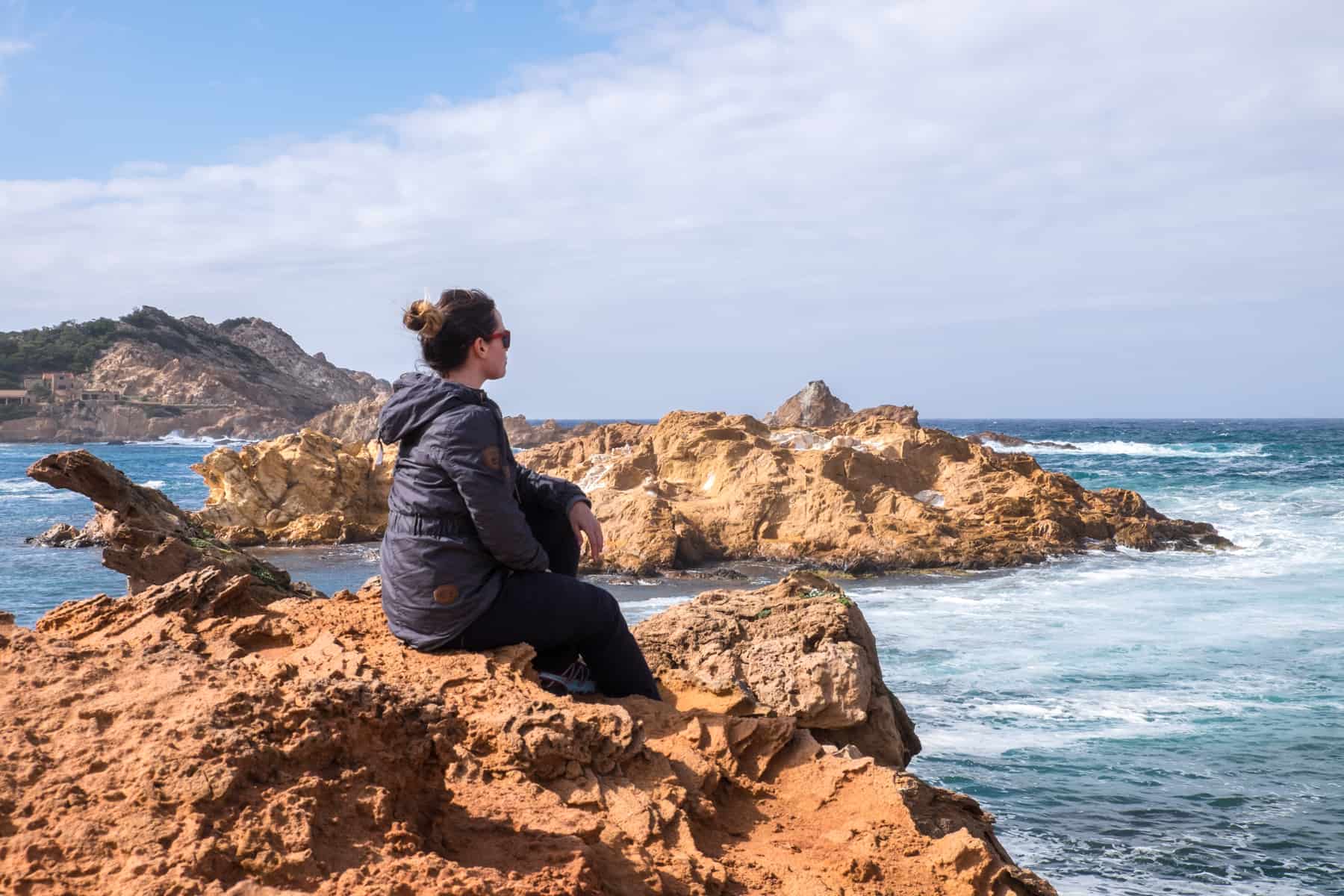 The appeal is a trail that conceals some of the most pristine landscapes in the Mediterranean – an island declared a ‘Biosphere Reserve’ by UNESCO. This sustainable loop swerves through multiple eco-systems, rugged coastlines that conceal 130 bays and coves, and a diverse landscape that changes from orange desert-like sands to dense woodland, wetlands to wave-crashing beaches, and flat paths to rugged cliff-tops.

Why the Cami de Cavalls Walk is Unique

Disclaimer: This post contains affiliate links to handpicked partners, including tours, gear and booking sites. If you click through or buy something via one of them, I may receive a small commission. This is at no extra cost to you and allows this site to keep running.
The Cami de Cavalls by bike 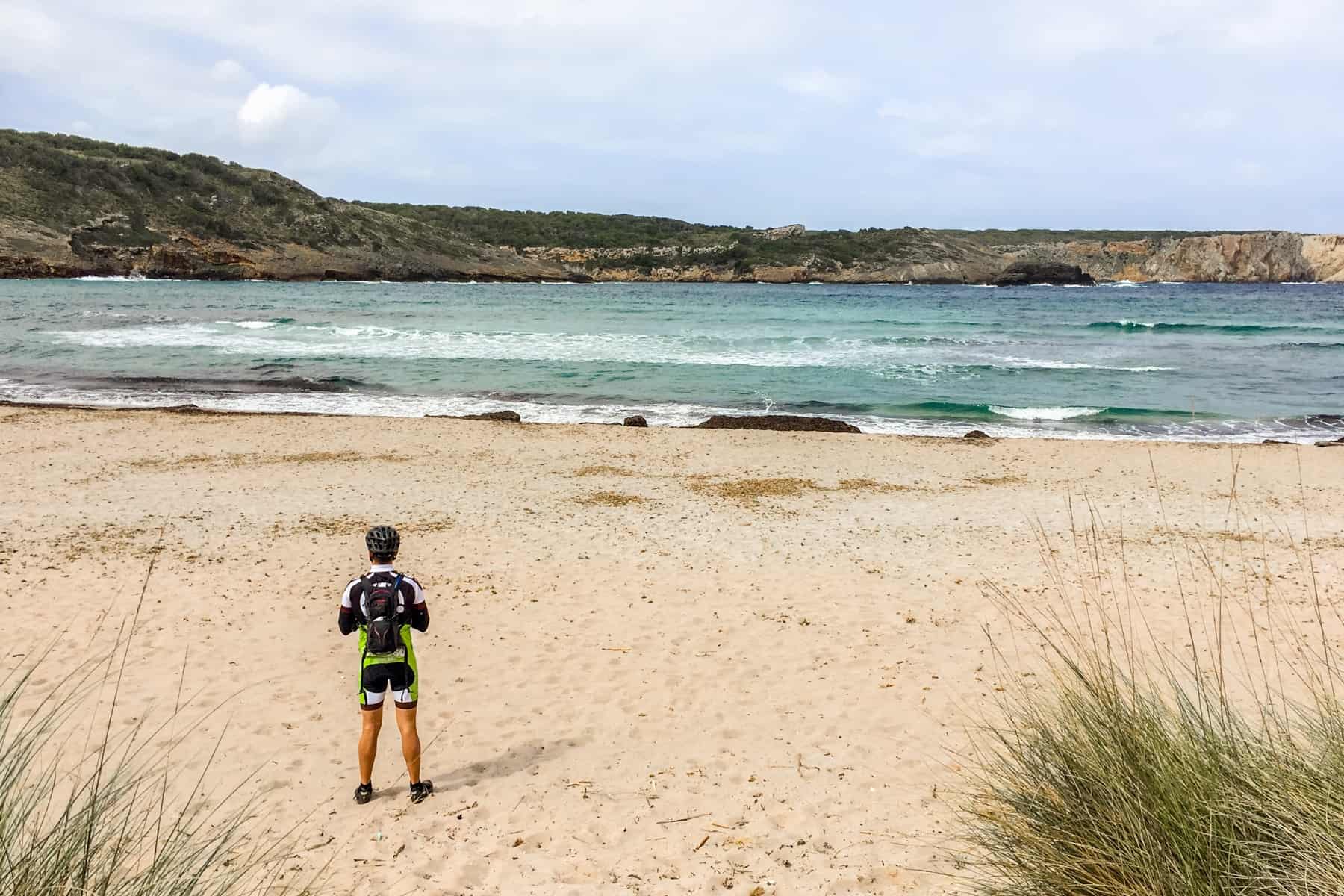 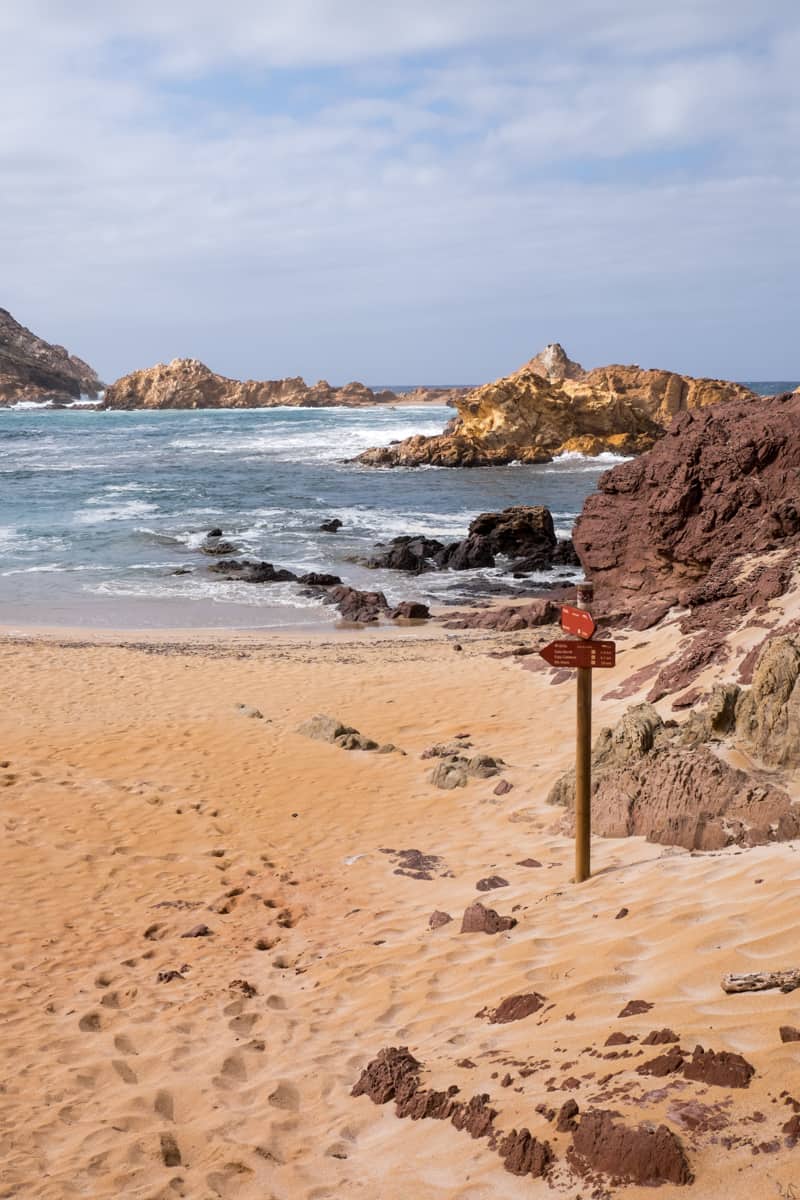 The meaning of Cami de Cavalls translates as the ‘Way of Horses’ – a name that is said to go back to the 14th century and the cavalleries (‘knights’) who were in charge of defending the island from pirates. Its use as a defence boundary was implemented on the island for centuries – with ancient watchtowers and trenches still intact – until parts of it fell to disuse in the 20th century.

http://www.camidecavalls360.com breaks down the hiking/trekking routes into 13 stages, with three different possibilities: entire tour (360º), northern half (180º N) or the southern half (180º S). You can start from either Maó or Ciutadella. I sampled parts of route 6 and 7.
The Camí de Cavalls by foot 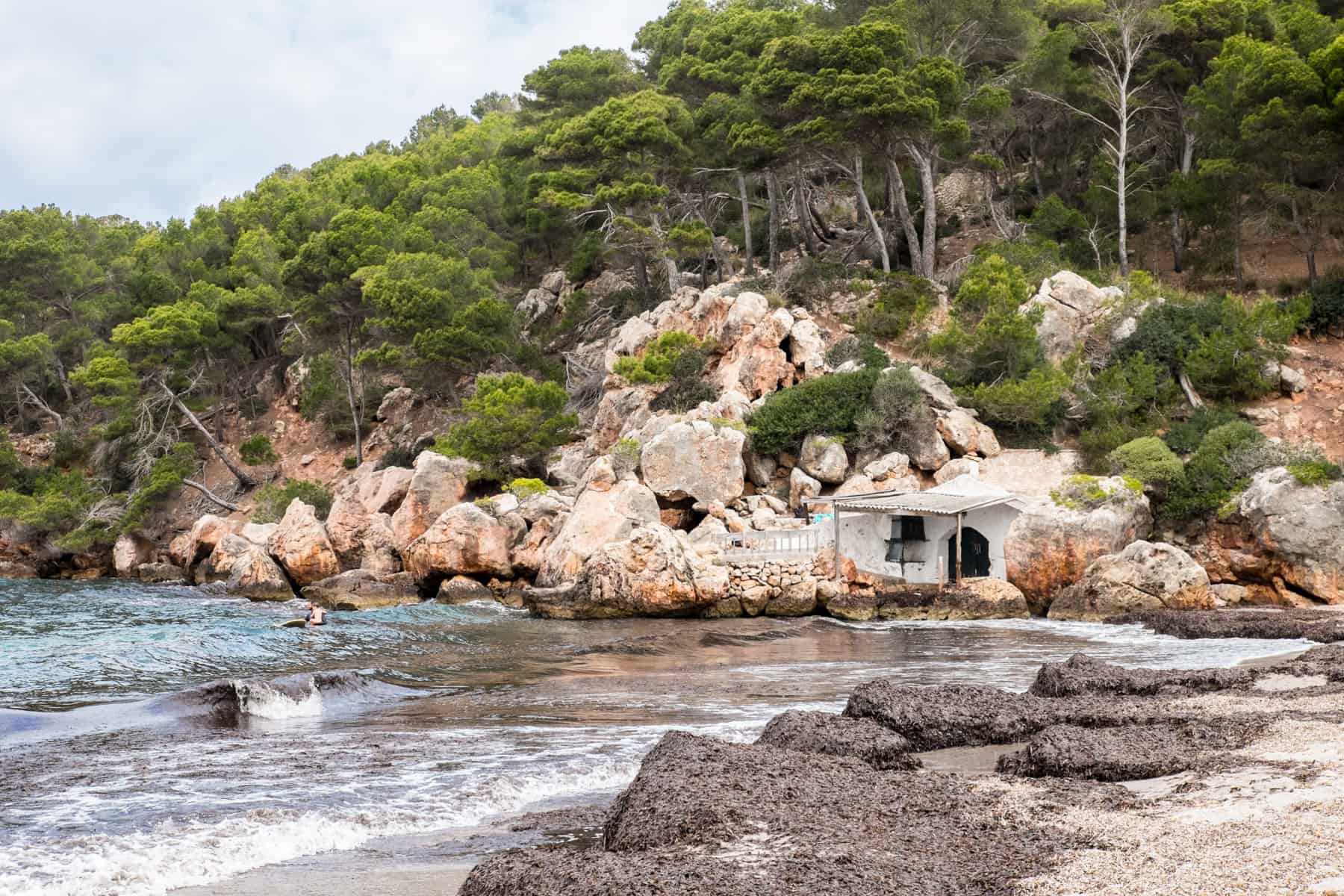 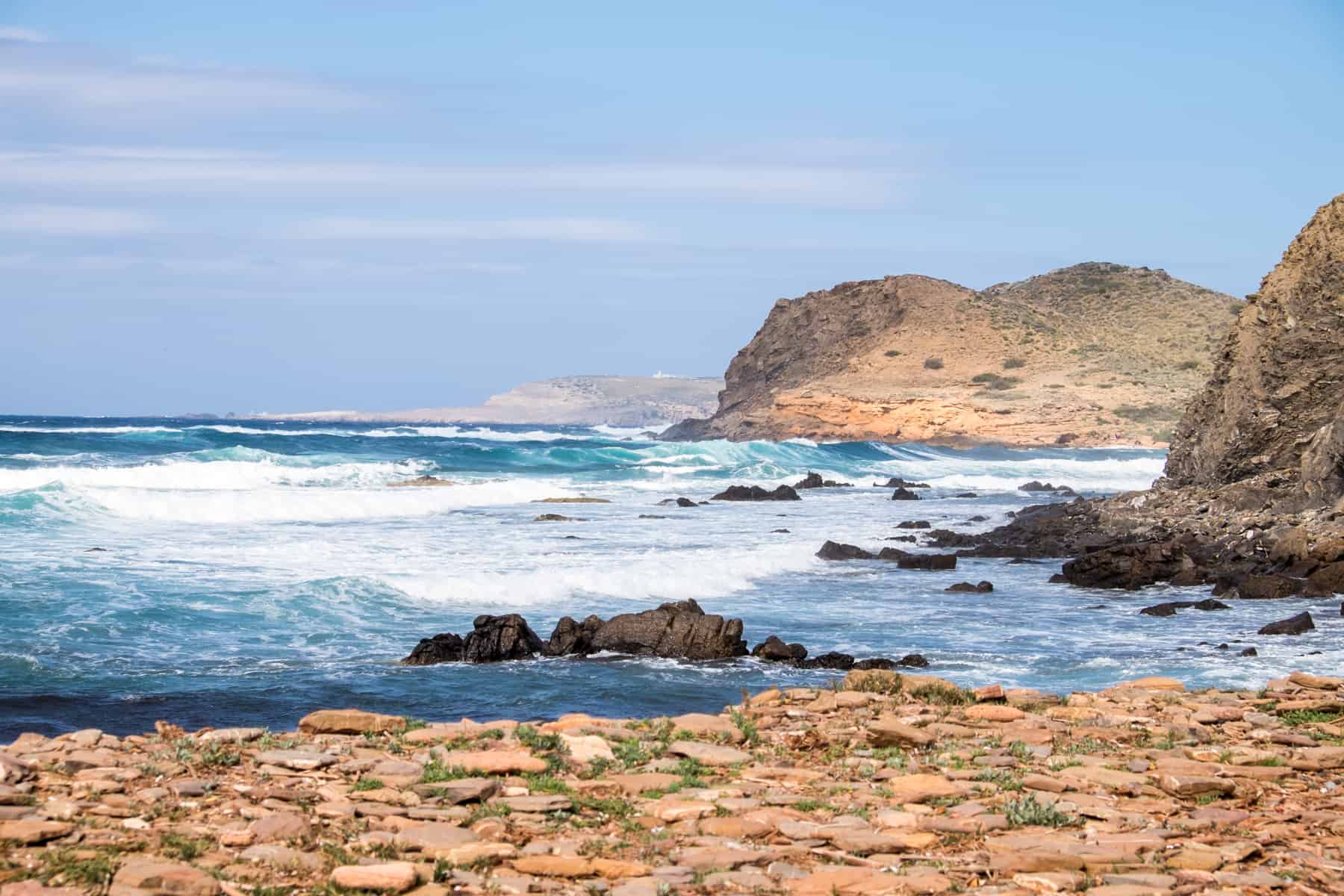 How long does the Cami de Cavalls take to complete? 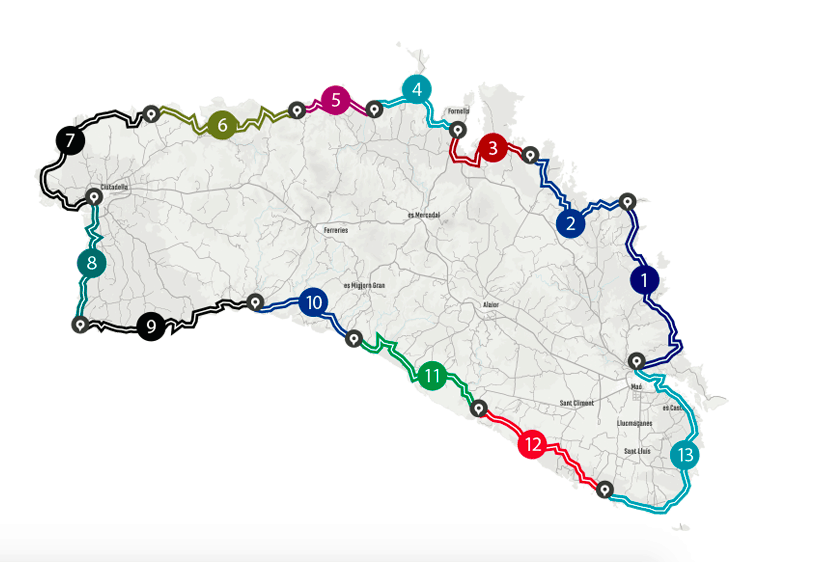 The Cami de Cavalls is split into a continuous loop made up of 13 sections or stages, giving visitors choice on how much to traverse and where.

How to see the Cami de Cavalls

Many choose to stay outside of the cities in Menorca along the southern coastline, or the stretches of coastline close to the city. 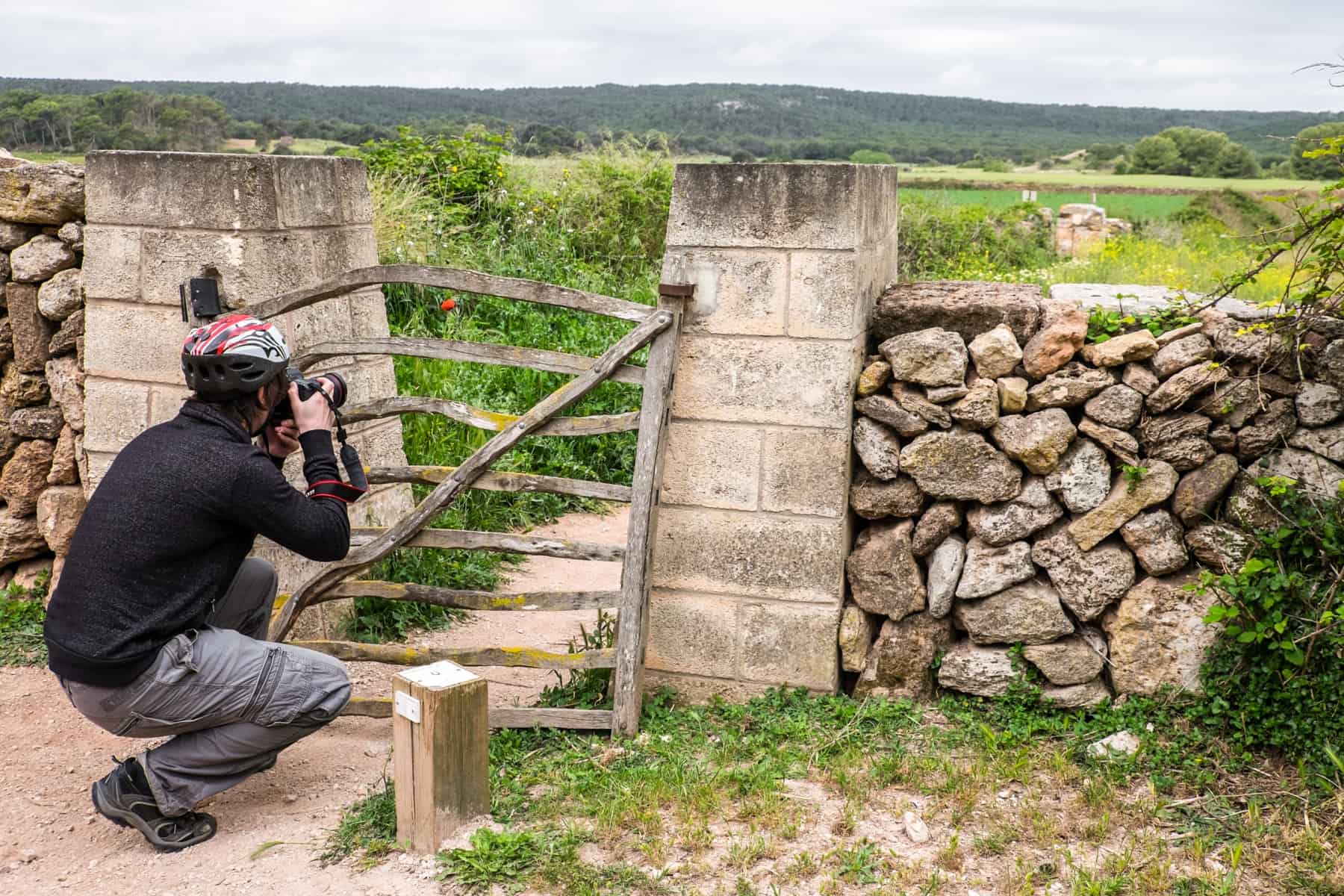 Every time we reached a wooden gate and fence – one of the trail’s other popular and famous markings – we knew we were on the right journey. You would pass over 100 of them, one approximately every 1.85km if you were to complete the entire route. 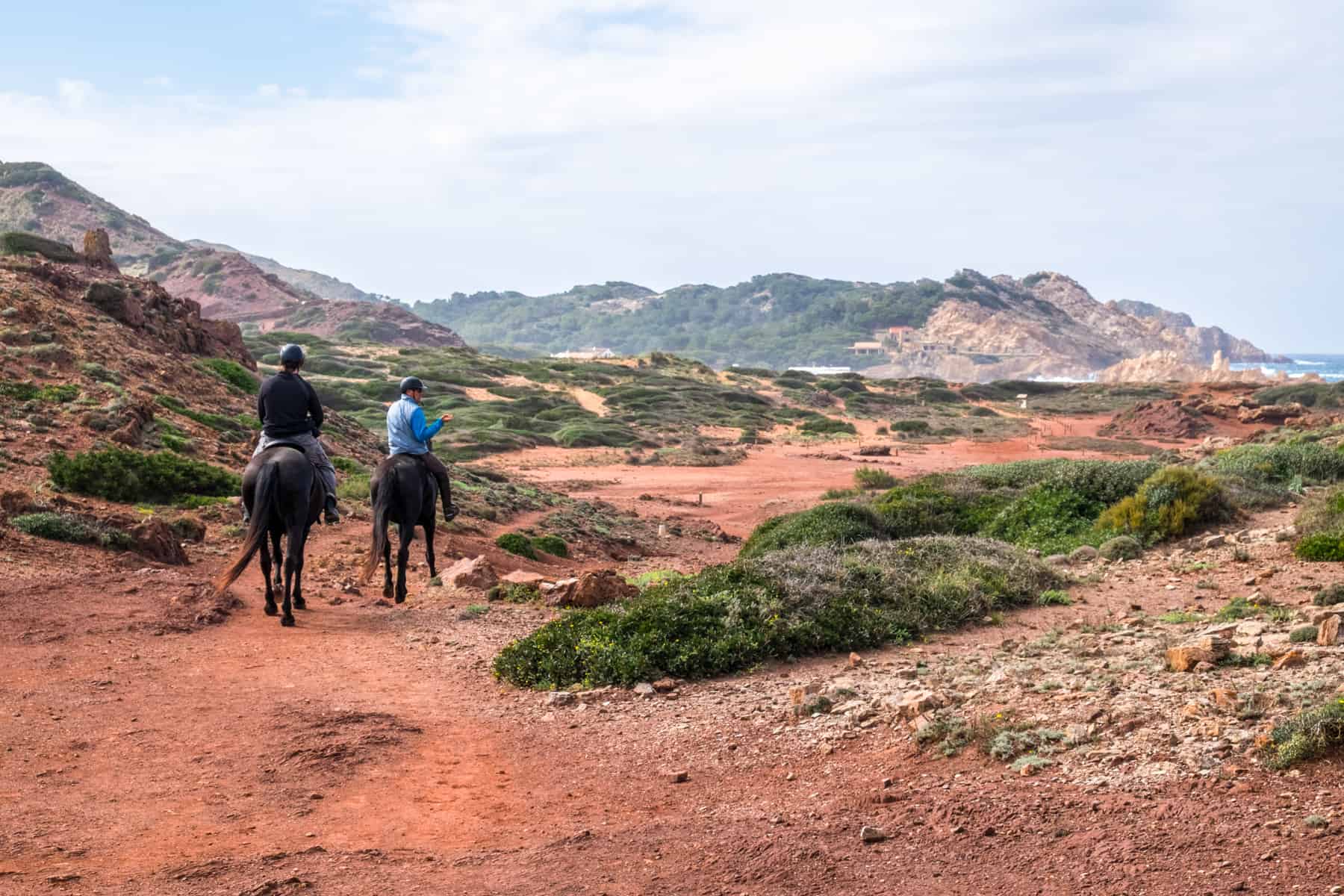 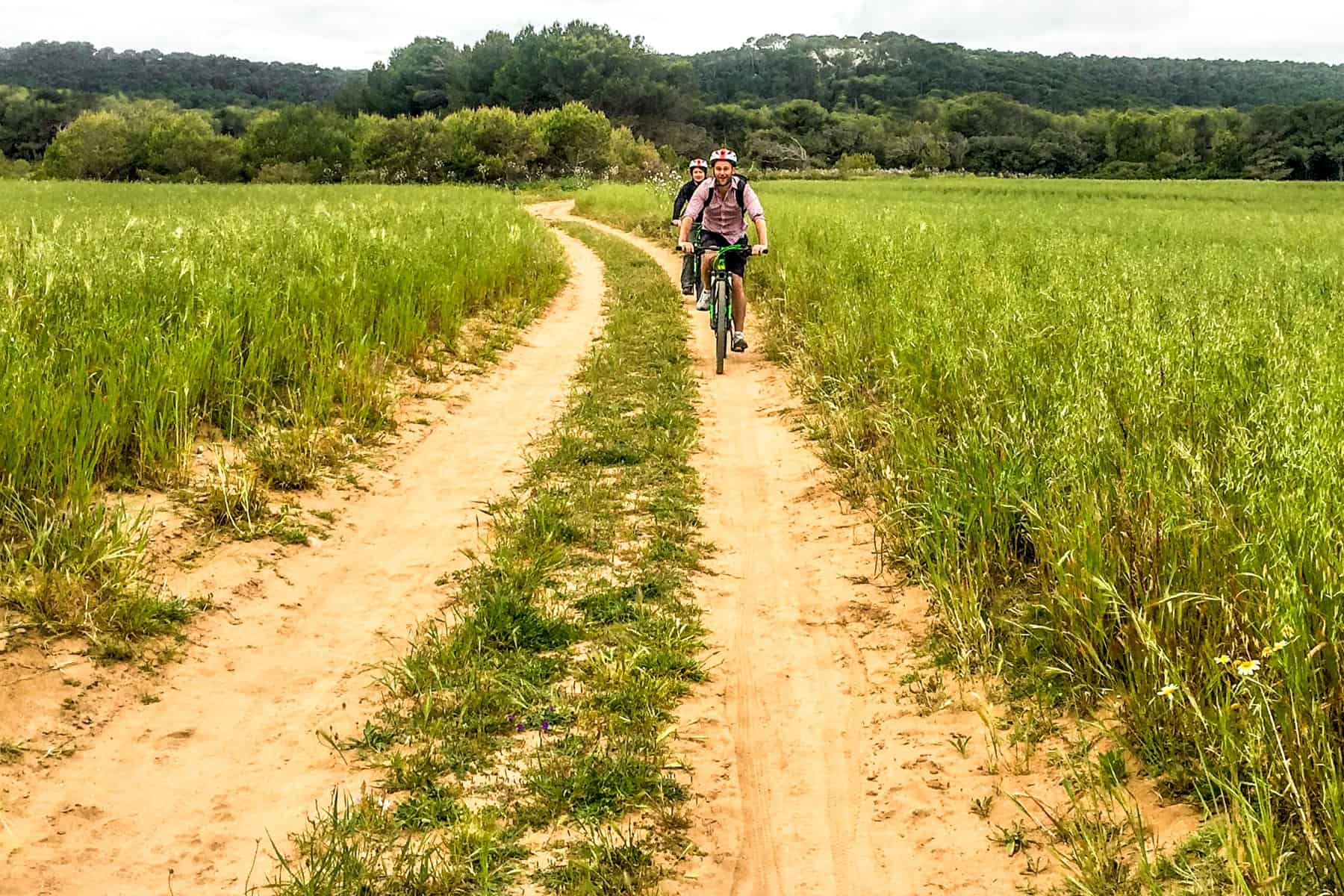 The Cami de Cavalls is completely off-limits to cars leaving it to be explored mainly via hiking, biking and horse riding.

I stayed in the Hotel Artiem Audax – An adult-only hotel, which sits on the nature reserve coastline of southern Cala Galdana Bay. 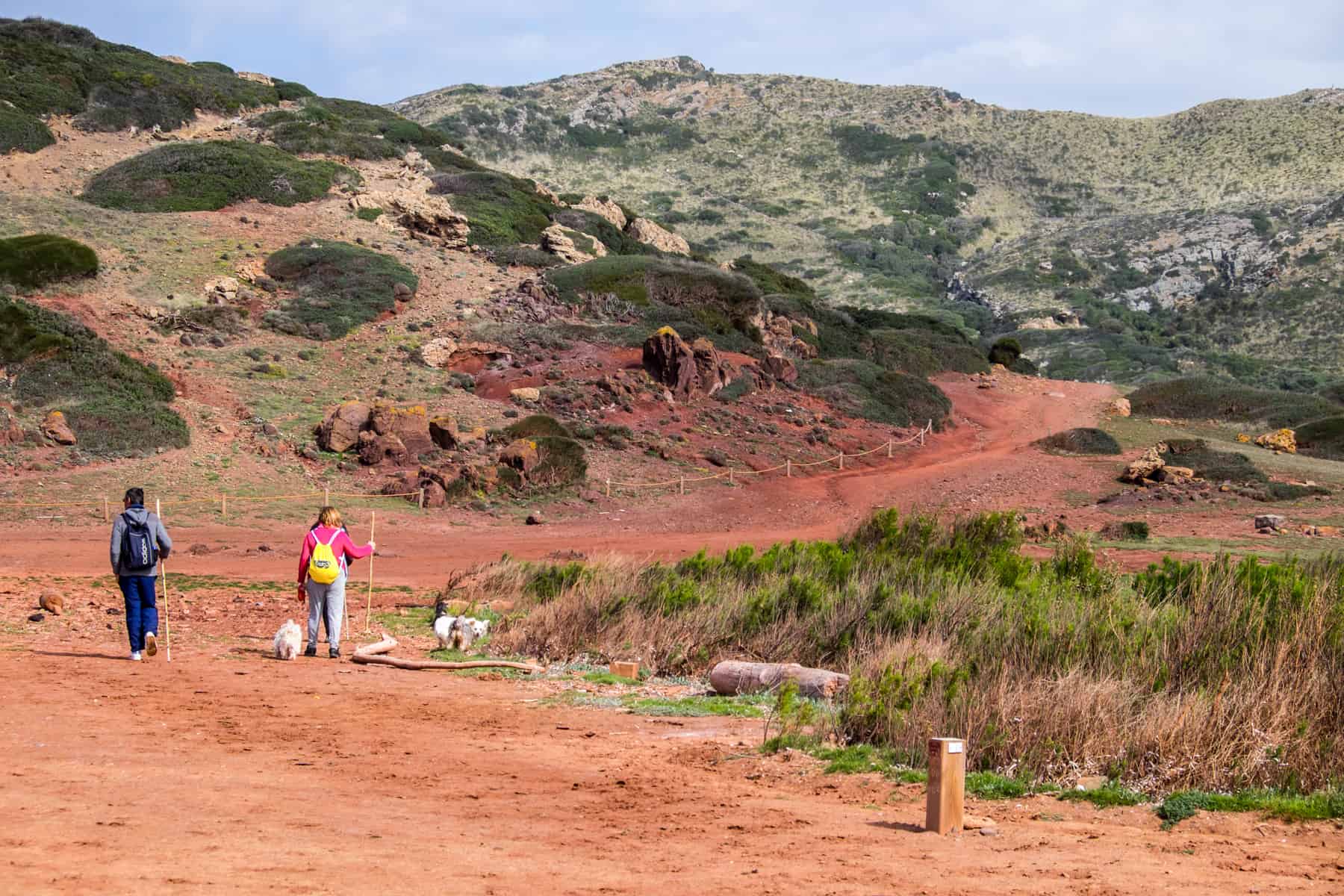 READ MORE: Things to Do in Menorca to See the Balearic Islands Differently
A pile of large golden rocks elevated high over a heart shaped beach in Menorca, Spain.
An island that has remained relatively unknown and untouched, in comparison to its well-established and famous Balearic neighbours, Ibiza and Majorca, Menorca attracts the more adventurous explorer and nature sports enthusiast.
The 14th century, farmland set Alcaufar Vell Hotel, the Marina Way holiday home near Cala Binibèquer Beach or the Insotel Punta Prima close to the quiet Punta Prima Beach are top choices on the western side of the island closer to Mahon.
Many sections of the Cami de Cavalls path remained closed for decades, with owners of property locking and gating their land. In the 1990s, under the protest of locals and with the help of the local authority, it was once again made completely accessible. 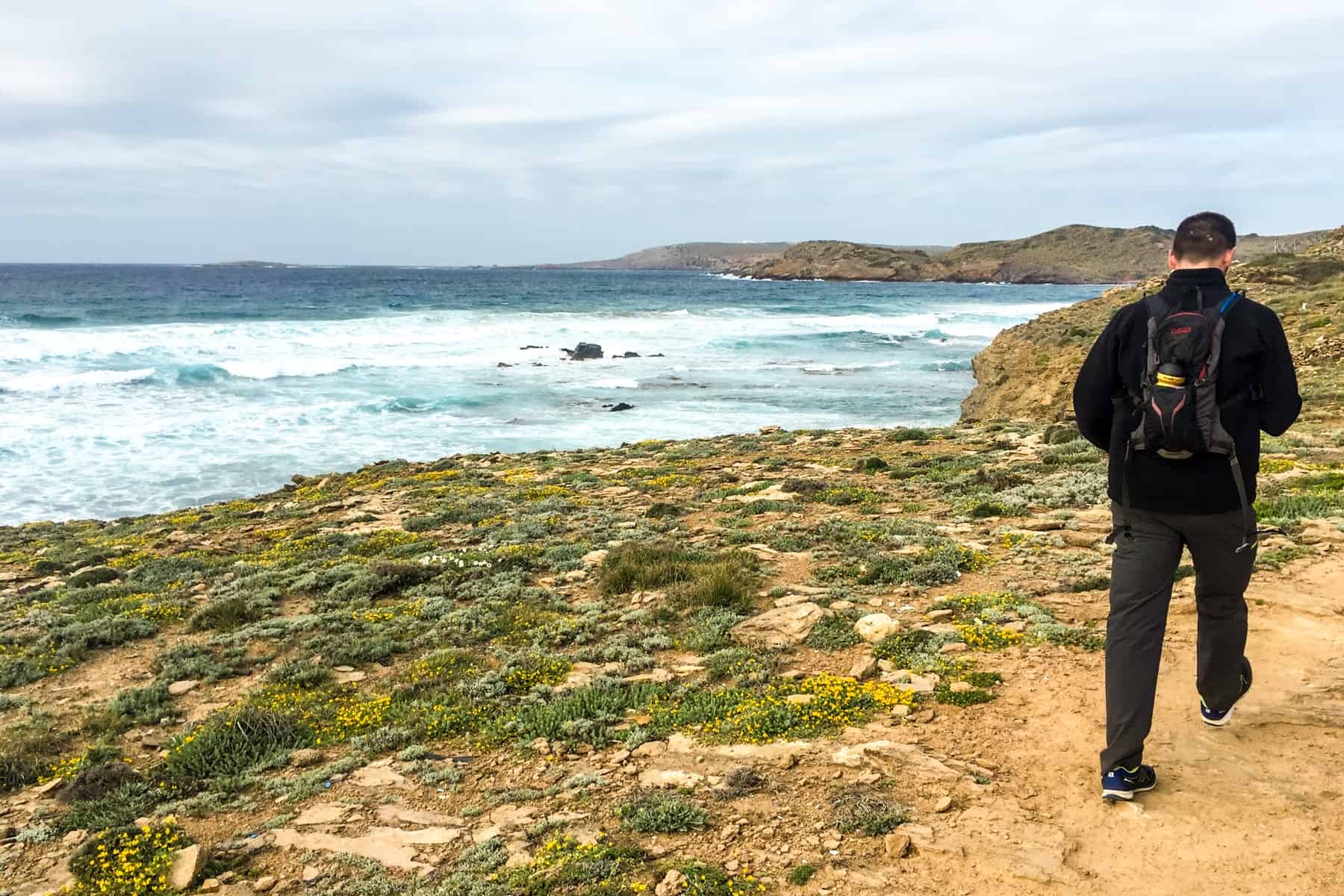 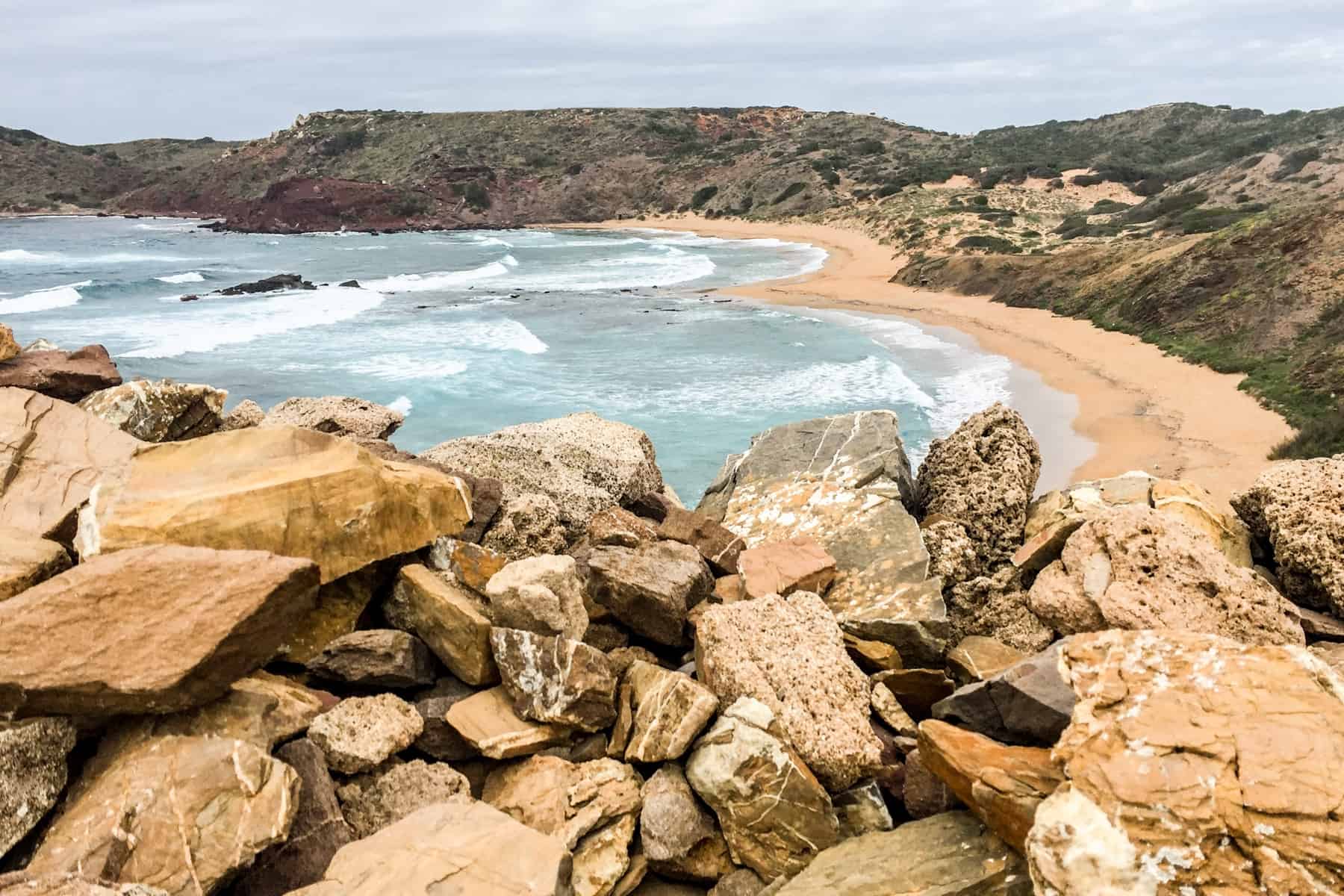 Our guide, Joan from Camí de Cavalls 360º said that such a journey would take around one week and that many people return to complete it more than once. Many people embark on one section per day, setting aside 10-14 days to complete the entire path comfortably.

Walking the Cami de Cavalls in Menorca, Spain is more than a ramble through nature, but a journey through history. Once an ancient military path built to protect Menorca from invaders, it is now a continuous nature trail that protects the environment and heritage of the island.
Two to five days on horseback covers a lot of ground, where you can ride the powerful and traditional Menorquín breed of horse from one of the many stables on the island and enjoy the path as it was originally used. 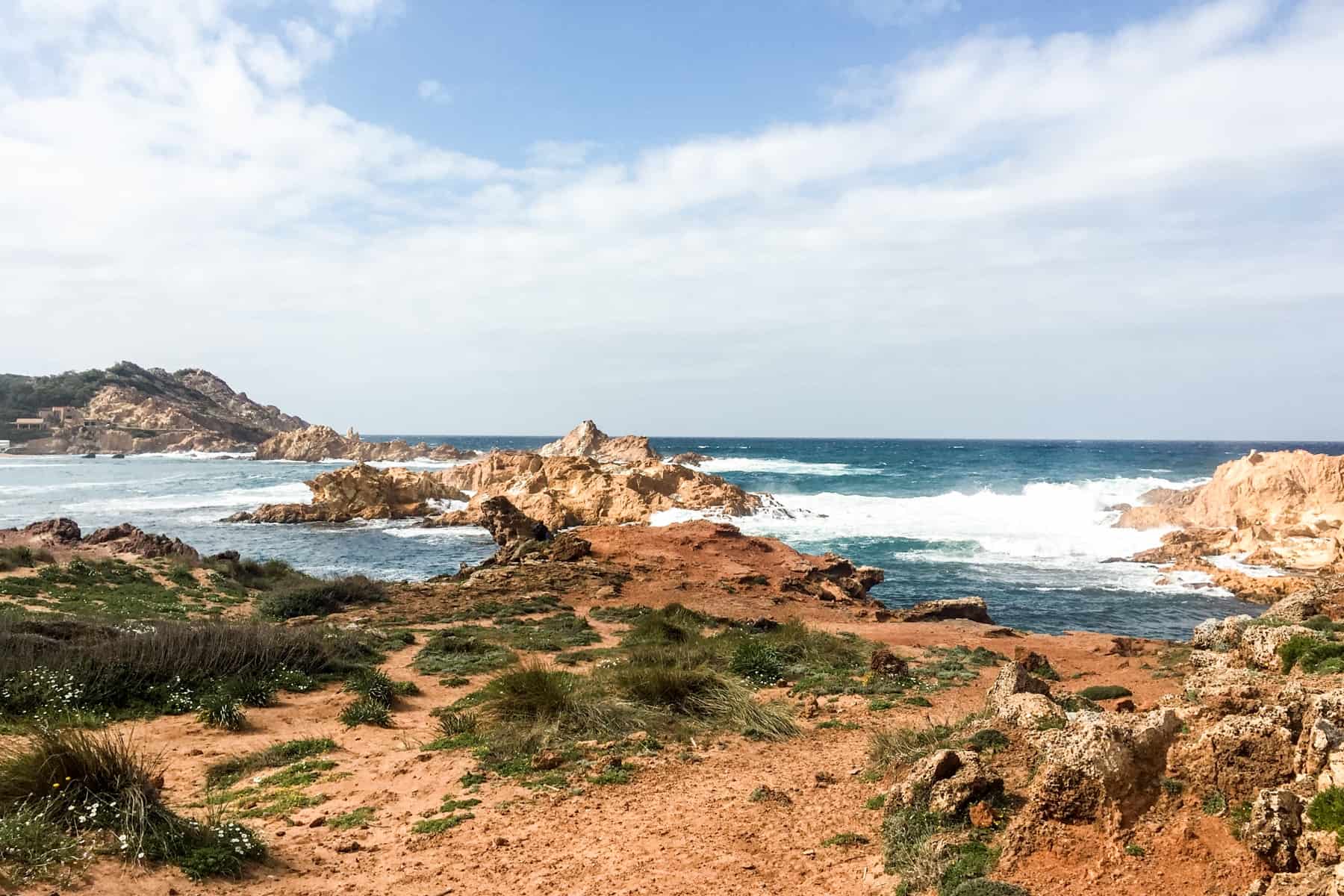 Things to Know About the Cami de Cavalls

Where to Stay in Menorca

We followed the wooden trail markers that line the route, stamped with the now-famous metal plaque with a picture of a horseshoe and the trail-marker number. Via bike and foot, they led to the woodland that concealed isolated beaches on the other side of leafy curtains, golden country roads that fed directly into dense green and hilly barren lands where not another soul could be seen.

Along the Southern Coastline

Casa Sa Posidonia, Posidonia Surf & Stay is a wonderful house close to the port of Ciutadella with various rooms, a rooftop pool and cool hangout areas. The main philosophy of the place is to encourage people to take to the water, so equipment hire (surf and paddleboarding) is available as are lessons.

The western side of Menorca: Near Ciutadella

The Cami de Cavalls on horseback

The Eastern side of Menorca: Near Mahon

For those wishing to be in Mahon, the relaxing Hotel ARTIEM Capri is just meters from Mahon Harbour and 7km from S’Albufera Nature Reserve.
Depending on what part of Menorca you are staying in, you can sample the sections close by and visit another part of the island to do the same. The sections of the path by Ciutadella and Mahon are more built up for the reason or being near Menorca’s main port towns.
The Cami de Cavalls once kept people away from Menorca in the name of its protection, but today the same path encourages people to stay and be a part of a sustainable method of its preservation. How many steps will you take in safeguarding the unique landscape of the island, held together by a single, circular trail?