The impressive architecture of the building and the courtyard add to the grandeur so it’s well worth popping in if you are in this hip area of Milano. More Info.
I’m kicking myself for not visiting this beautiful library on either of my visits to Prague. The Klementinum is one of the largest building complexes in Europe and the Baroque library bills itself as ‘the most beautiful library in the world’ and they might just be right.
To celebrate National Library Week I reached out to my Instagram community and asked them to share about the unique libraries in their hometowns as well as some of my favourites.

What I wasn’t expecting during my trip to Japan was to stumble upon a library designed by no less than the man behind the Tokyo 2020 Olympics Stadium, Kengo Kuma. 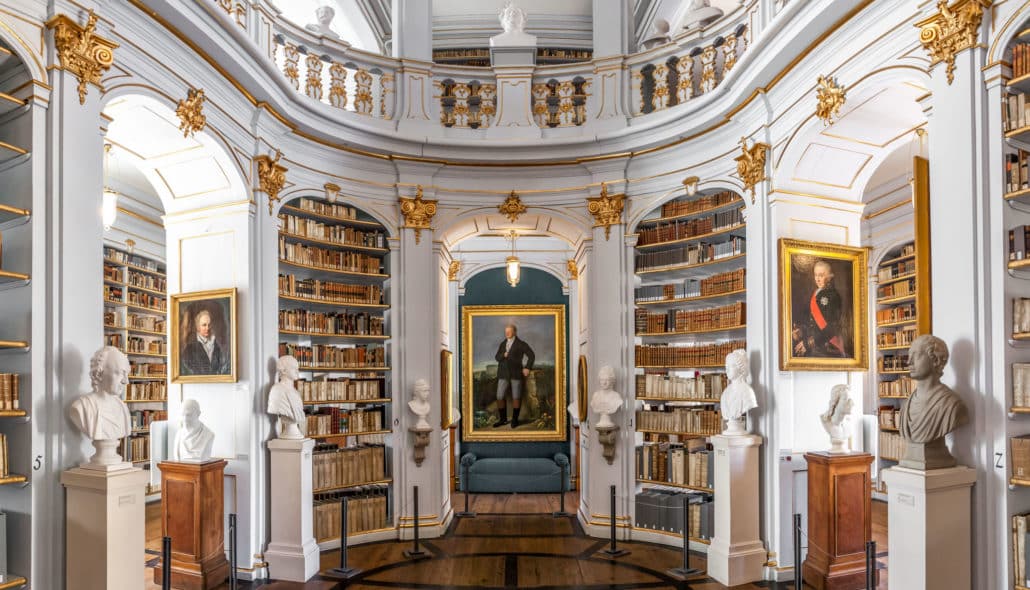 Located less than an hour from Lisbon by bus, the city of Mafra is quite compact, but the Mafra Palace dominates. This vast building is UNESCO listed, and with an entry for only €3 it’s a bargain.

There are some truly incredible libraries in the world. From ancient parchment collections to modern-architectural wonders, you can get as lost in the grandeur of many libraries as much as you can in the stories they contain.
One of the most famous libraries in the world and home to various talks and presentations, as well as its vast collection of books, The Public Library is a place for everyone to learn.
The collection boasts the ‘Silver Bible’, a 6th-century rare manuscript and map collection that is an exciting draw for visitors to this part of Uppsala, and the hand-written music notations by none other than Mozart himself. More info.
Tragically the library had a fire in 2004 that destroyed much of its decoration and books but through a dedicated restorative team around 60,000 volumes and the grand interior were restored. 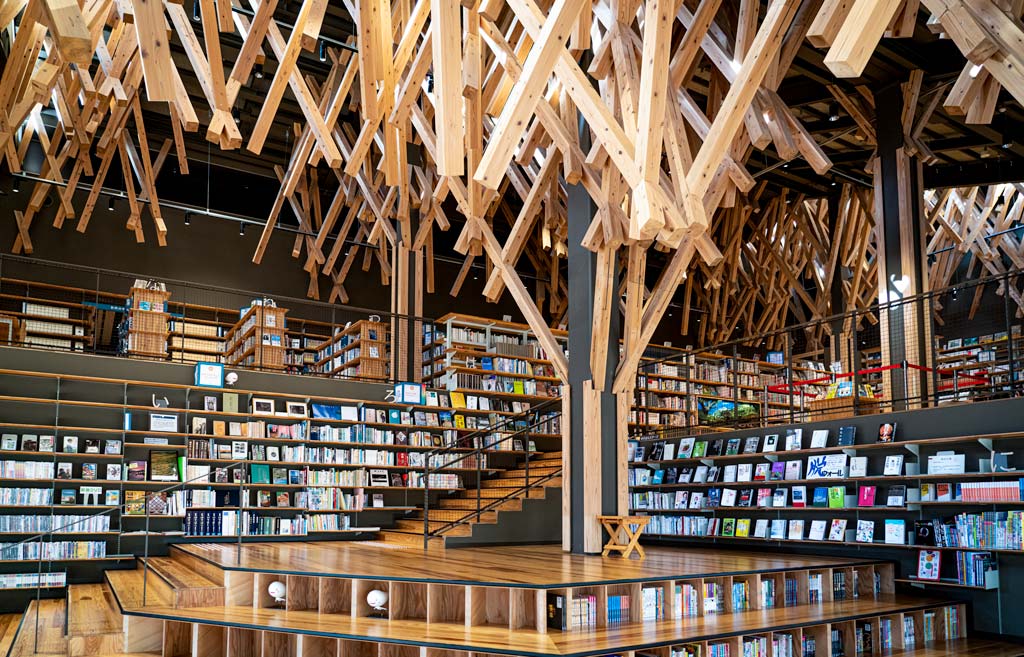 Inside, its well-placed staircases and leading lines make for more than the perfect Instagram shot, they make a great place to settle into your favourite novel. With a nod to how public libraries should be open to all, on the four sides of the hall you can find the word Library in German, English, Arabic, and Korean. More Info.
When it was converted into a book store, the theatre seats were removed and replaced with shelving for the collection and now you can browse the store, find a snug corner to read in or if you are lucky, you can enjoy the live piano music when being played. More info.

Thanks to Ade on Instagram for the recommendation.
One of my favourite discoveries so far in Portugal is the Mafra Palace.
Opened in 2011 the ultra-modern, white lines of the 40-metre high public library room in Stuttgart is a sharp contrast to the ornate finishings of its sister in Weimar. From the outside, this box-shaped building really comes alive at night with the glowing light from each of its large square windows.

Now part of the University of Manchester it’s pretty much a real-life Hogwarts studying room and one of the highlights of any visit to the city. More info.
Libraries have always have always been a special place for me. The opportunity to read, study and learn in a peaceful environment, and for free, is something I believe everyone should have access to the world over. Since I started travelling, they have also become an ideal escape from homesickness and travel worries. Settling into a seat, grabbing a book, and losing myself in the pages has become my go-to travel reset.

I stumbled upon this library completely by accident in my favourite area of Milan, Brera, during my long weekend in Milan and Lake Como. 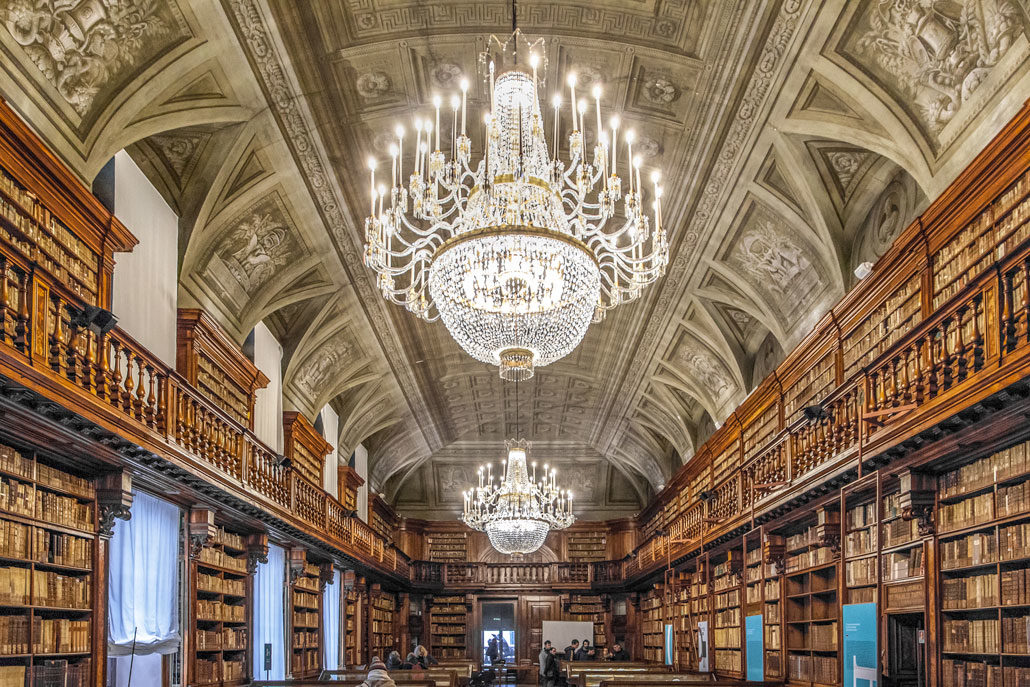 Read up more about reasons to visit Kochi, Japan

The building itself is actually late-Victorian, although against the backdrop of Manchester’s modern city you could easily assume it dates back later than 1900. Still open to the public, it was founded by the wife of John Rylands in his name and memory.
Thanks to Sarah on Instagram for this recommendation.
Guided tours take you through the grandeur of the library, with various astronomical clocks amongst the 20,000-strong book collection. The ceiling is a true masterpiece and it’s somewhere I can’t wait to see with my own eyes when I return. More Info.

You can wander through various rooms and halls throughout the palace, including visiting the Library. Sadly, at the time of my visit (Summer 2020), you were no longer allowed to walk through the Library, but I’m not sure if this is a temporary Coronavirus change, or permanent.
The 18th-century building is one of the most beautiful historic libraries in Europe and boasts more than 200,000 books in its imposing ‘long room’. It also houses the ‘Book of Kells’, a world-famous gospel manuscript dating back to the 9th century. More Info.
Thanks to Ana Rita on Instagram for this recommendation.

Ever since I saw a photo of John Rylands Library in Manchester I knew I had to visit and last month I finally got the chance to tour its impressive vaulted ceilings and hidden collections.

I stumbled upon this one by complete accident after exploring Helsinki Cathedral which is just across the road.
Not taken a library, but rather a bookshop, this grand building in Buenos Aires had to make the list. Originally a performing-arts venue when it opened in 1919, it is now one of the largest book stockists in South America.
Before sinking one too many Guinness’ in Dublin, I got in a slice of culture at Trinty College Library. Serving as the University of Dublin’s library, and the largest in the country, the dark-wood work, and shelves stacked with volumes is one of the coolest buildings to check out on a tour of the city. 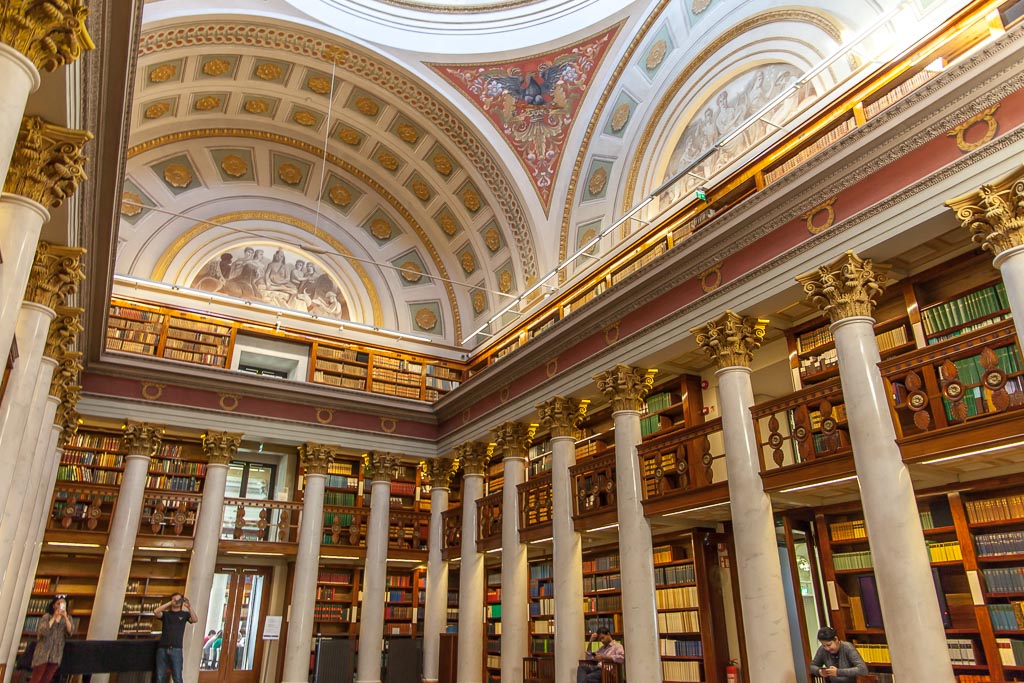 The towering dark wood bookshelves contrast against the ornate gold doorways making the main room breathtaking. The academic prison underneath is another extra to visit on your tour of the library. More info.
Located in the beautiful village of Yusuhara, made even more magnificent thanks to its forested mountain setting and buried electricity cables, rather than overhanging like much of the region, this picturesque library is a homage to the woodwork the renowned artists like to design with.

Got an amazing library worth travelling for near you? Leave it in the comments so I can keep building this list, thanks 🙂
Thanks to Rhianna on Instagram for the recommendation.
The library is part of the art institute in Milan and it is also open to visitors as a public library. One of the largest libraries in Italy its collections contains scientific, legal, and historic texts. What I loved about the library is the mix of historic elements alongside the modern computers and students at work which made it feel more alive than many of the historic libraries in Europe.

12. The National Library of Finland

The Helsinki University Library by Anttinen Oiva Architects has won awards for its white, futuristic curved ceilings but if you like your libraries served up with domed ceilings and intricate artwork, then the National Library of Finland is well worth popping your head into.
With over 50-million items, ranging from traditional books to digital media, the lovingly curated collection which has been built up over 150-years provides a peaceful respite from the buzz of the big apple. More info.

The town of Weimar in Germany is a designated UNESCO World Heritage Site thanks to its contribution to the arts and as an intellectual centre in the early 1800s.
With a range of modern study literature and early classics including theatre and a dedicated Hebrew collection, the main draw for visitors to Oxford is the architecture of the building itself. You are able to visit Lincon College as a small group during stipulated visitor hours. More info.
A converted church, the Lincoln College Library in Oxford is now a beautiful University study space. The 18th-century All Saints Church only re-opened as a library in 1975 while retaining the grandeur of its former life.

Mafra Palace dates back to 1717 when construction began and was completed in 1755 by the Royal Family. It’s one of the countless beautiful palaces we have in the country, many of which are open to the public and a dream to wander around.
Mixing clean-white bookshelves with chandeliers, this grand building which completed construction in 1841 is a gem. In the reading rooms, height wins, from tall windows to tall columns, it’s an open space perfect for flicking through a few chapters. In the main hall though, home to some 5-million books, you’ll be blown away by the light colours and imposing light pieces. 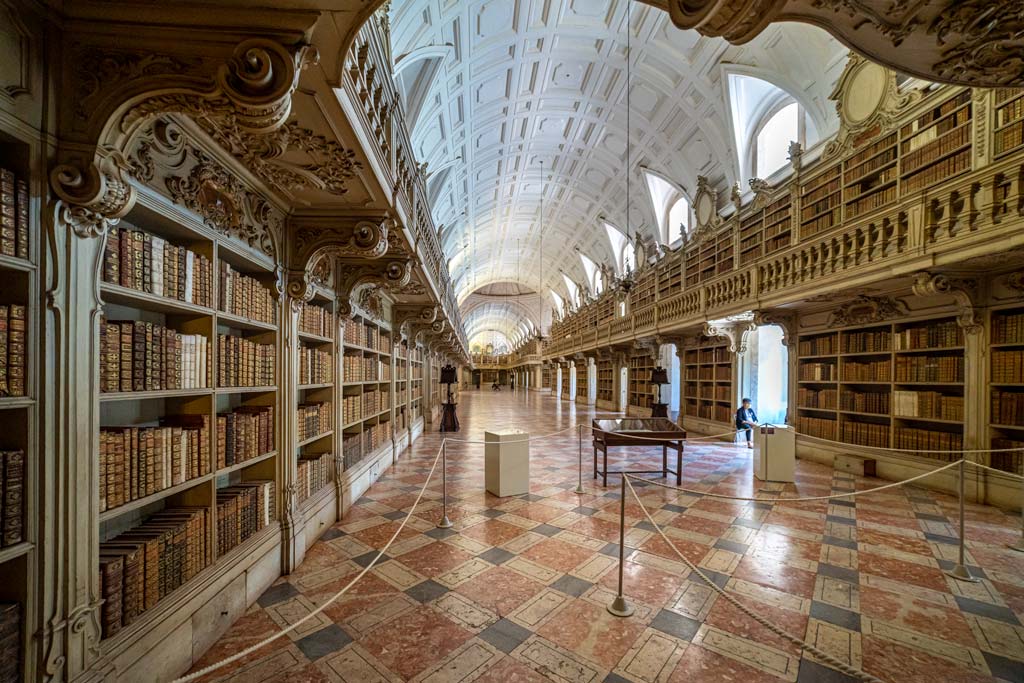 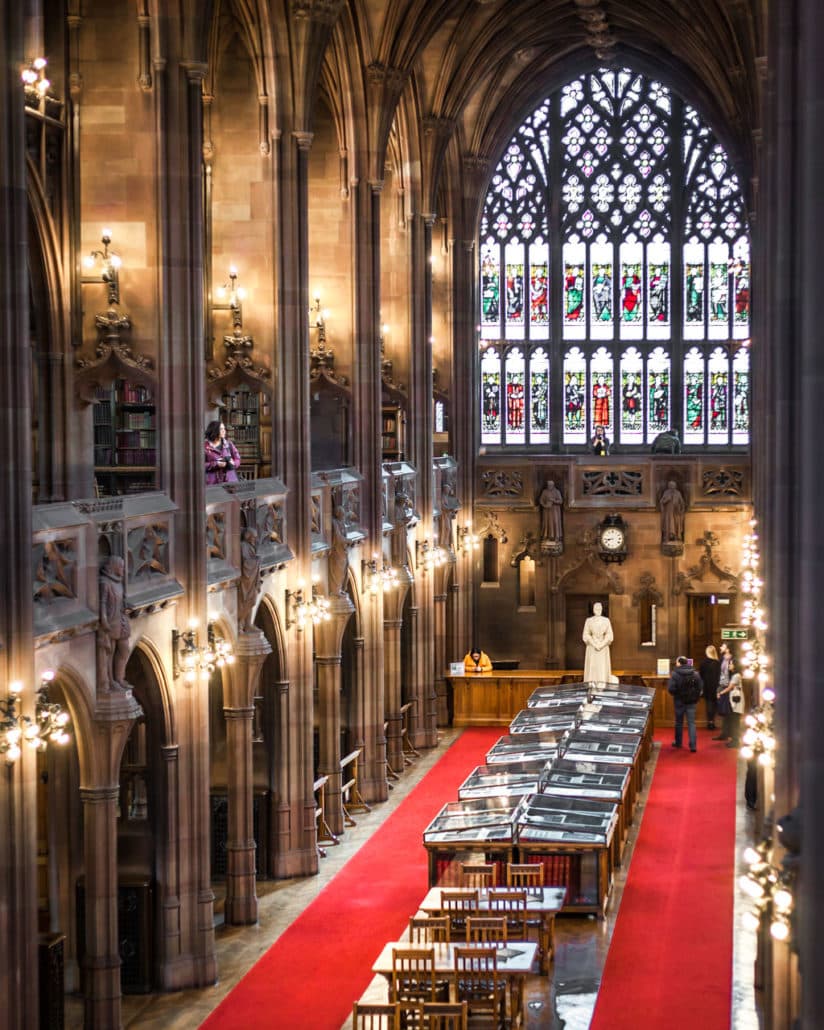