Visit in partnership with the Tourism Recovery Programme
Ready with a bucket of suitable dredged mud, David quickly layers it onto the fertile lands before slicing it into perfect cubes with a rake. With expert procession, he adds a seedling into each individual cube in this section of land, which will grow lettuce. Across the different Chinampas, hundreds of other seedlings were sprouting or already developed. From beetroot and spinach to cilantro and medicinal herbs, countless species were grown here in the ‘Garden of Mexico City.
In a country where so much of the tourism funds head straight to the beach, and from there, much more heads back to international tour companies, it’s clear to see why Mayra is so passionate about connecting travellers directly with the locals. Sure, they might not be classically-trained tour guides, but who else is better to teach you about an ancient farming method than those who do it each day, or to take you into a local Indigenous community than a woman who has spent more than a decade forming those bonds.
In fact, prior to the pandemic, Mayra and Manos a la Tierra hadn’t even considered international tourism at all. They had domestic visitors and some 17,000 volunteers who would support their projects all around the country – from river-servicing projects in Whacca alongside the indigenous communities to collaborating with ethnic groups in Jalisco to raise the profile of their natural plight – but involving travellers in the projects has been a relatively new concept.
‘Covid has made it very difficult the last two years to run these programmes, but now we start again. There have been fewer volunteers, and the restrictions made it harder for people to participate because of safety and security’.

‘Most tourism is on the beach, and many visitors miss the culture and beautiful inland places and communities we treasure’, she continued over coffee, eagerly sharing many of the other environmental projects across the country that she, and her team, are excited to start bringing travellers to visit. Although these ideas are new for the NGO, Marya’s background and studies were in sustainable tourism.
‘Still, we hope, as tourism recovers, we can continue to collaborate with the recovery fund, we can restart our work supporting important environmental issues and help the communities we have built those special relationships with,’ Mayra explains – as David leads us towards the farm-lands – highlighting just how devastating the pandemic has been not only for tourism but also for environmental and social projects as well.
As the traffic breaks and we leave the bustle of downtown Mexico City behind, the colourful trajineras boats of Xochimilco burst into view. Lined up in their hundreds, these crafts sit ready and waiting to whisk city-dwellers and tourists alike off on an afternoon of mariachi bands, ice-bucket cooled beers, and laid-back, good-time vibes.
While the NGO that Mayra founded some 15-years prior still stays true to its community and environmental pledges, fewer donations and funds, coupled with the pandemic, led Mayra to a nomination with the Tourism Recovery Programme, which hasn’t just injected cash into the operation but also opened the days to another realm of possibilities with tourism.

The programme, powered by TUI Care Foundation (the charity arm of the tour company), enpact (a Berlin-based organisation supporting entrepreneurs and their ecosystems) was implemented in cooperation with a German development agency (GIZ), under a commission by the German Federal Ministry for Economic Cooperation and Development (BMZ).
‘The Tourism Recovery Programme has supported us with some funds, especially mentoring for the tourism offering, promotion, capacity building, and marketing. The idea is their support will help us connect with other visitors from the United States and Europe’ Mayra states while passing me my umpteenth tortilla to douse in the rich and chocolatey mole sauce.
As David dredges the nutrient-rich mud from the small canals sounding the Chinampa – rectangular fertile lands floating on the lake bed – I learn how, after the revolution, peasants fought for ownership of this land to keep farming. Nowadays, it operates as a communal land system, where all of the farmers have a say, especially in recent times when selling the plots has become possible.
I, for one, am very excited to see how Manos a la Tierra translates their other environmental projects into authentic tourism experiences. Still, I have no doubt they will remain true to their roots as they do so. For a chance at an unrivalled look deep into the country’s culture, I suggest you take a look at their shiny new website or contact Mayra directly and make Manos a la Tierra a memorable part of your next Mexico trip. 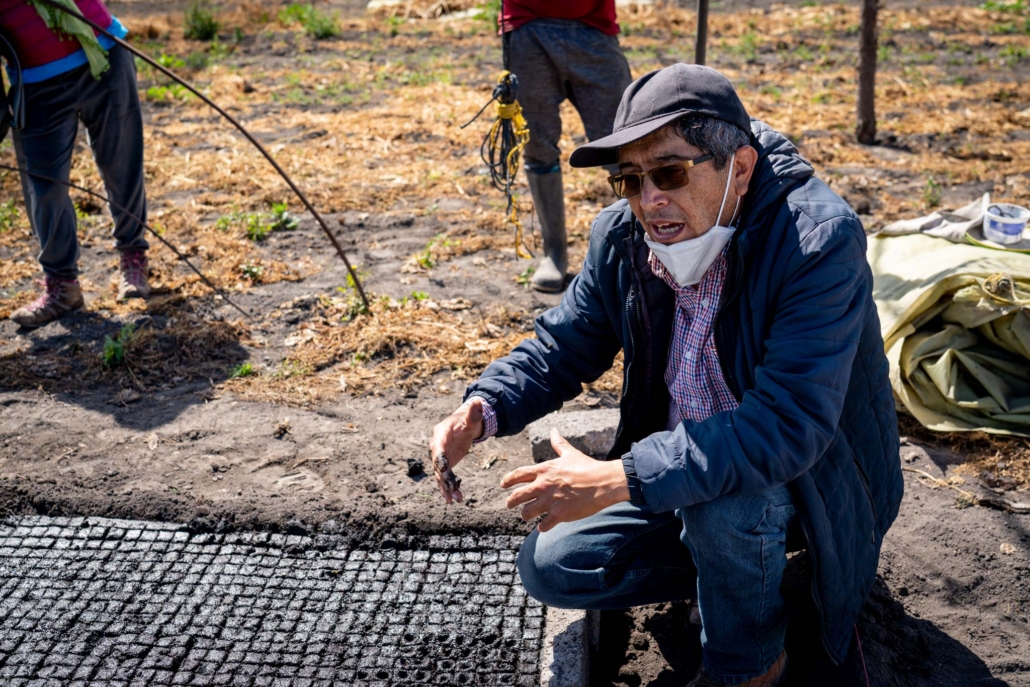 Here, inside the gates guarding the UNESCO listed zone of natural and cultural heritage, you’ll be greeted by the impressive chinampas agricultural system hailing from the Aztec period. The floating gardens are a collection of artificial floating islands where farming has flourished for centuries. 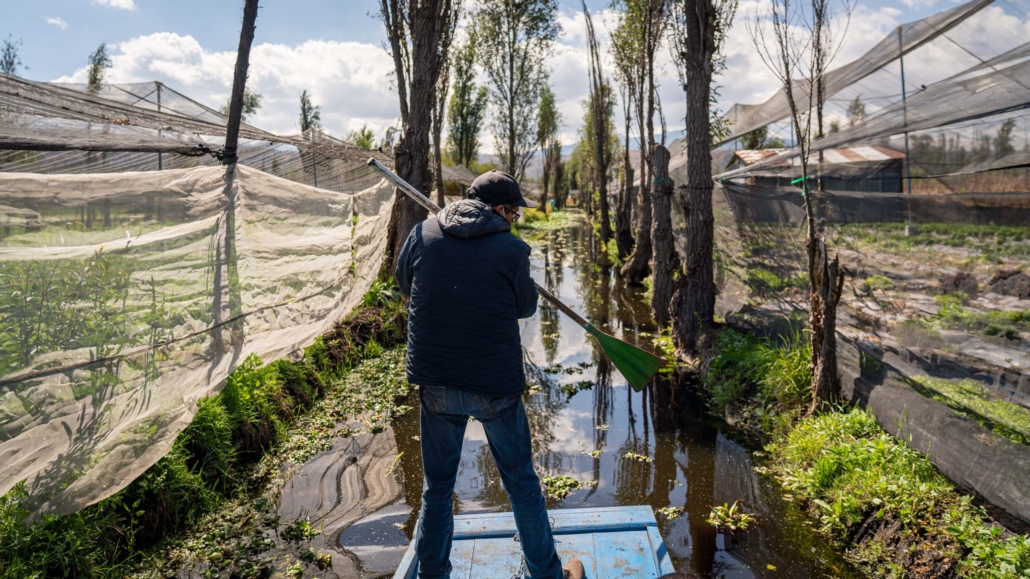 ‘Our idea is to connect tourists with nature and different cultures, so they can support our environmental projects while learning more about the local lands’ – Mayra Jiménez, the founder of Manos a la Tierra, had told me early that morning over a breakfast of chilaquiles, a spicy egg, tomato and tortilla dish in a Coyoacán cafe.
These edible plants would make their way onto tables and restaurants across the city, including the gastronomic neighbourhood of Roma. In contrast, other garden plants were destined for the famed flower market nearby – one of the largest and most prestigious in the country.

See all of Manos a la Tierra’s experiences on their website.
Unlike the rent-a-boat and jump onboard affair outside the gates, you’ll need to make arrangements to visit the protected area in advance. So few travellers currently spend time inside, I learnt I was the only visitor that would grace the waterways for the whole day. 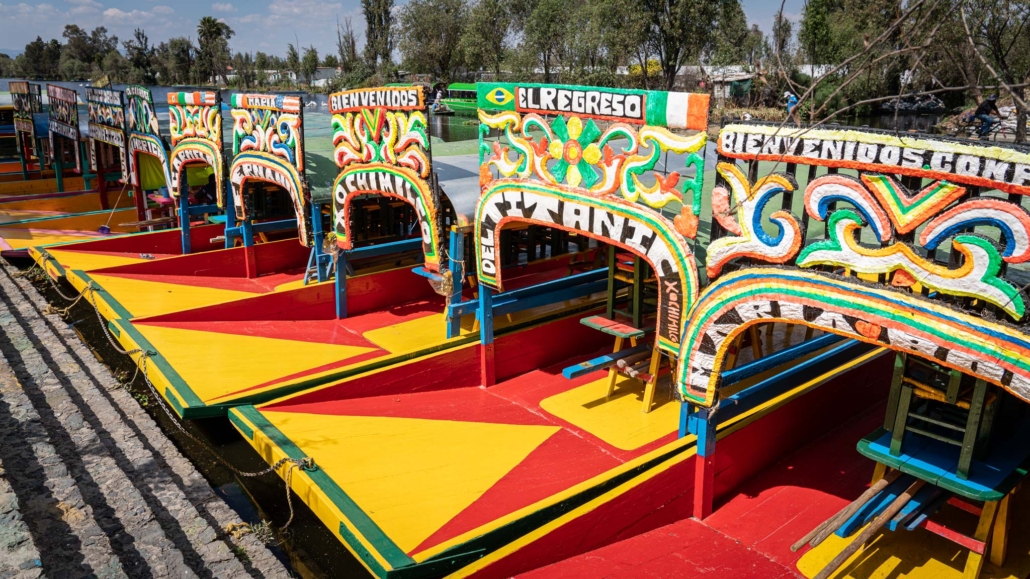 Inside the Natural Area of San Gregorio Atlapulco, somehow, this age-old farming technique has managed to survive – albeit slightly adapted to the modern-day, partly due to environmental changes. Manos a la Tierra has collaborated with Casa de la Chinampa for ten years on restoration projects here. Now, with additional tourism funds, they hope to turn their attention to reforestation and species conservation.
Leading us away from the wide-lakes and marshlands, where a project was underway to try and return endemic fish, including the Axolotl, a type of salamander known to regenerate the limbs, David shares his lifetime of knowledge as a Chinampero. His son, soon likely to follow in his footsteps, hangs on every word.
Alongside the expert training and support offered, an initial funds boost amounting to €9000 was supplied to over 100 nominated Mexican businesses by GIZ, supporting them to survive, and thrive, post-pandemic, using tourism as a catalyst for change.
However, we aren’t here to stop and join the waiting crowds for a morning of pre-lunch revellers. Instead, we continue a little further towards the traditional and more authentic reason these waterways exist: the Protected Natural Area of San Gregorio Atlapulco,

‘We really want to personalise our trips; for example, if people come with family and friends and want to stay many days, we can build them a special tour – alongside having group trips that guests can book’, Denis added, highlighting that their new website was currently being finalised and launching as part of their project work with the Tourism Recovery Programme.
Manos a la Tierra, an eco-tourism and volunteer agency that was founded some 15-years ago as an NGO, was my ticket and gateway to get behind the fence and into the sublime nature of the city’s most famed wetlands.
With migratory birds floating above before swooping down to the vast lagoons, it feels a world away from the buzz of activity on the other side, let alone the might of Mexico City, her skyscrapers still visible in the background.

Less than an hour later, I was shaking hands with David, a traditional Chianparo farmer. He, alongside our translator Denis, would guide and educate us on this fragile and frankly fascinating ecosystem. A place so rich in nutrients that, at one time, it had essentially fed the whole city.
As we sail down the serene and near-silent waterways on a much smaller, punting-style boat than outside the protected area, David hands me the oar, which is much more like a long wooden stick, and I take over. In the blissful moments that followed (except when I may have got us stuck in a floating plant), I listened to the birds tweeting, water lapping, and for a minute, completely forgot I was in Mexico City, one of the most populated metropolises in the world.

My visit to Mexico was in partnership with the Tourism Recovery Programme – you can learn more about how this fund and mentorship is supporting local businesses on the link, and find more information about the partners powering the programme on their websites: TUI Care Foundation and enpact.