Visit in partnership with the Tourism Recovery Programme
As we settled into our seats inside the newly-constructed wind-blocking farming structure, I had one obvious question I needed an answer to – what are Nopales?
‘We have been supported by a Tourism Recovery Programme in structuring our Nopal Route. We had deficiencies in marketing and how to make alliances with other collaborators – the financial support [from the programme] allowed us to improve our facilities. So we know we don’t need to fail due to the covid situation,’ he further clarified.
The ceremony was fascinating and conducted in an old language that even Alan didn’t fully understand. We turned four times to represent the four opposite corners of fire, wind, water and earth – with a shell, flame, fruit and water acting as each.

As I said my goodbyes to Rosa Maria, Alfonso’s sister who was driving the transfer home, she beckoned me back towards her. Sliding a bracelet from her wrist, she handed it to me.

Around us, local artists Diana Granados and Mayra Soto had their work hanging on the walls, as two dogs sat at my feet waiting for their turn. Judging by their bellies, they know what was coming their way.
‘A lot of these traditions and cultural acts were lost with the inquisition,’ Alan whispers to me as smoke lingered in the air and the call of a sea shell awoke nearby resting birds.
Then, a genius diced them up and started cooking with them. While touted for their various health benefits, including combating diabetes and lowering blood pressure, the research into the exact health benefits is ongoing. However, they are becoming far more common as food on supermarket shelves in Mexico and globally.
‘Something to remember us by,’ she smiled, further compounding my newfound belief that Mexico City was overflowing with the friendliest capital-dwellers I had ever met. And now, glancing at my right wrist as I write this article, it certainly brings me right back to that day – even from London’s grey, sky-rising tower infested background!

‘There is a lot of collaboration with our tours,’ Alan tells me before I jump back into my ride to the city, ‘We’re helping other small businesses, artists, and producers who previously relied on word of mouth. We are excited to start welcoming more international visitors to our tours and sharing our culinary heritage with them,’ he added, waving me off with his cheeky grin.
‘We had the idea to start these tours, to show the cultural and gastronomy importance of these plants for a while,’ he explained before taking another spoonful of chicharrón.
I’m here on a brand new day tour to learn all about the versatility of Nopales, especially their role in Mexican cuisine, and how this plant which wouldn’t look out of place in an arid desert, has become a cornerstone of the local economy and culinary scene.
Once inside Teuhtli, a local collective of artists commence a ritual ceremony, a way to say thank you to the powers for this earth and life.

Moments later and donned with protective gloves, I was let loose with a machete-like tool to help harvest our lunch. As Rosa, an expert farmer, showed me how to slice off the top of the Nopal plant, the tastiest part that also allows it to re-grow, I was in awe at the speed and precision I witnessed.

Some 20-years ago, this location was the most significant farmland of Nopales in the country, producing around 75% of the plant. Although now it has been relegated to second place, the rows and rows of cacti, which from afar could be mistaken for vineyards, spread out in every direction. With São Paulo mountain in the background, it was a blessed setting to spend a day learning another side of this seemingly never-ending city. 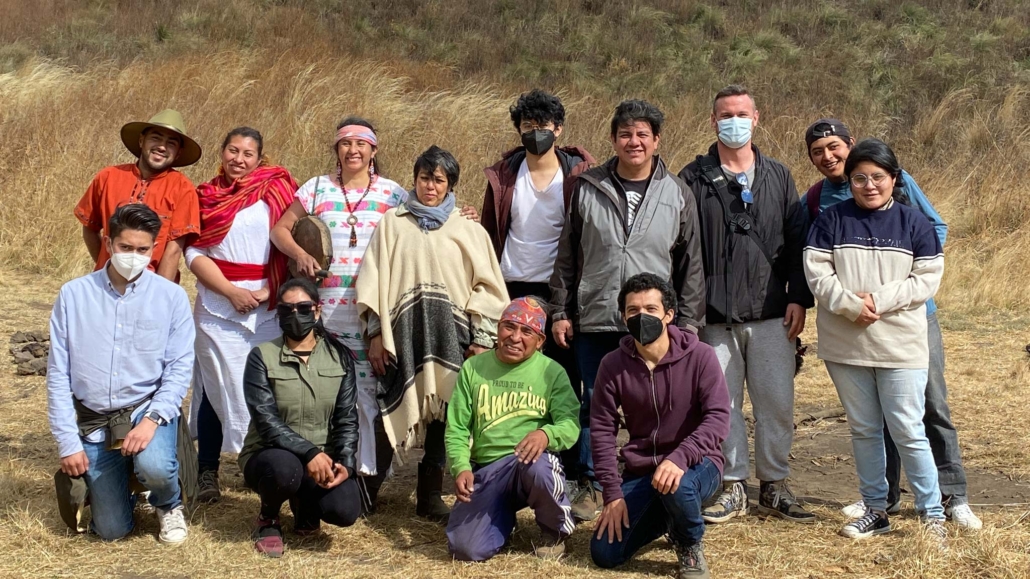 As it turned out, only around 15 types of cacti out of hundreds are actually used commercially, and their purposes have changed over the years. Nopales, for example, had historically (and, as I learned in Teotihuacan, still are) used as a type of glaze or dye, and a source of traditional medicine.
Like many of the tourism businesses I was visiting during my trip to Mexico City, this was another that was operating with the ongoing support of The Tourism Recovery Programme. Set up at the start of the pandemic by TUI Care Foundation (the charity arm of TUI Holidays) and enpact (a Berlin-based organisation supporting entrepreneurs and their ecosystems), with the support of the German government, the project had not just injected cash into countless tourism businesses in various countries but also provided more important training, mentorship and up-skilling to help the companies grow in the (hopefully) post-pandemic tourism boom.

Devouring the many delicacies

‘You didn’t feel it’, Alan asked as we stepped back into the light, a visible shiver travelling down his spine. I hadn’t felt it, and in all honesty, I wasn’t sure I wanted to ask exactly what ‘it’ was.

Before long, we were all dining on dishes such as Chicharrones (pork and Nopales together in a mild green sauce), grilled Nopal stuffed with cheese, various salsa with a Nopal base, and tortillas stuffed with Nopals and meat – all washed down with fresh tamarind water.
For the final stop on our day trip, we detoured into San Pedro Actopan, a nearby village famed as the mole capital of Mexico – so important is the production of said sauce here, it has earned the destination of a barrio mágic (magic neighbourhood).
On the way back down from the farmlands, we stop to visit some caves linked with spirituality. Once a cave tunnel that had collapsed, they were renewed for rituals – both good and bad – although it seemed the night before our visit, the rituals had undoubtedly been of the latter type.

The scent of the sauce is nearly as delicious as the taste. As Magali Alvarado showed our group around the Don Louis Mole Factory, which her father founded, we learned all about the many ingredients – up to twenty-five – that are ground together to create this rich, spicy and slightly sweet sauce. Of course, free tastings were essentially mandatory!
Luckily, Alan Martínez, my young and friendly guide and translator, was on hand to answer and educate, as a local cacti expert placed a dozen different species on a bench in front of us and explained how each one varied.
Beyond the dense rows of Nopal plants (Prickly Pear Cactus) spreading out before me, the towers of downtown Mexico City rise in the distance. Somehow, we’re still in CDMX, yet as skilled farmers quickly slice chunks of Nopal like knife-wielding ninjas, it feels a far cry from the hubbub of the city’s downtown.
‘It was a recent idea to incorporate tourism. We showed some clients here and told them about the producers. Then we realised we could show the cultural and the gastronomy aspects, alongside the region’s identity to visitors’ he explained. Emphasising how much of the tourism to the north of the country is visitors from the United States, this would allow for an educational and fun day trip.

Spirituality inside an extinct volcano

Alfonso, the founder of this new Ruta Páak’am venture, sat beside me; and we started talking about the effects of the pandemic and why now seemed a good time to foray into tourism.

But wait, why is this called Ruta Páak’am and not Ruta Nopales? I ask Alan, confused by the tour company’s title? The answer was relatively straightforward. While Nopal is the modern-day word for the plant, the original Mayan name was Páak’am. 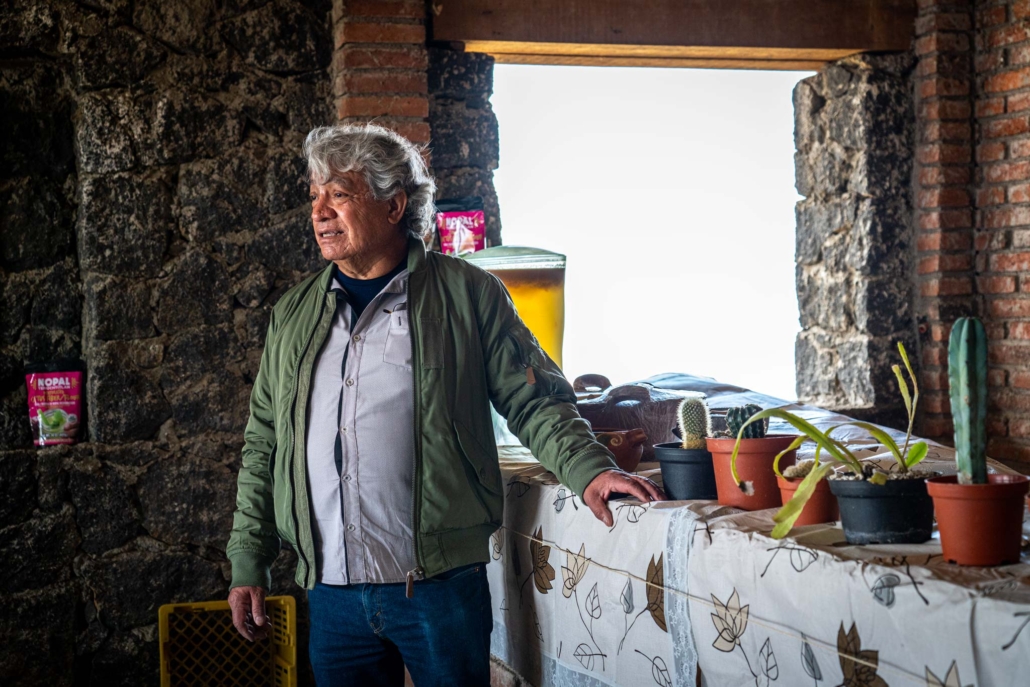 ‘If you ask me, the best flavoured Nopal is here in CDMX. Because of the elevation, the soil – it’s the best,’ Alan whispered to me as toast coated in a delicious passionfruit and Nopal jam was handed out.

Heading back towards the bustle of the city centre, I reflected on what an excellent new addition to CDMX’s tourist offering, the Ruta Páak’am, was. Small, locally-focused co-operatives, coming together to share their passions, rather than outsider guides capitalising on an opportunity.
While Rosa and I continued to slide the knife around the edges and pointed parts of the plant, so they were ready to cook, Alan told me more about their newly opened Ruta Páak’am tourism business.
While my attempt was somewhat clumsy, it still gained a little applause, perhaps more from politeness than skill. As I heard how a skilled farmer could not just slice but also prepare upwards of a thousand plants a day, I realised I was a long way off from a career change.
Of course, I knew they were a type of cactus – but were all cacti edible, how many cacti are there, and how come this one had found its way into so many of the country’s dishes?

A sweet and spicy finish

Returning from the fields with baskets full of freshly cut Nopals, we all set about together over the grill preparing a lunch feast, which would allow us to try many different plates with a cactus base. 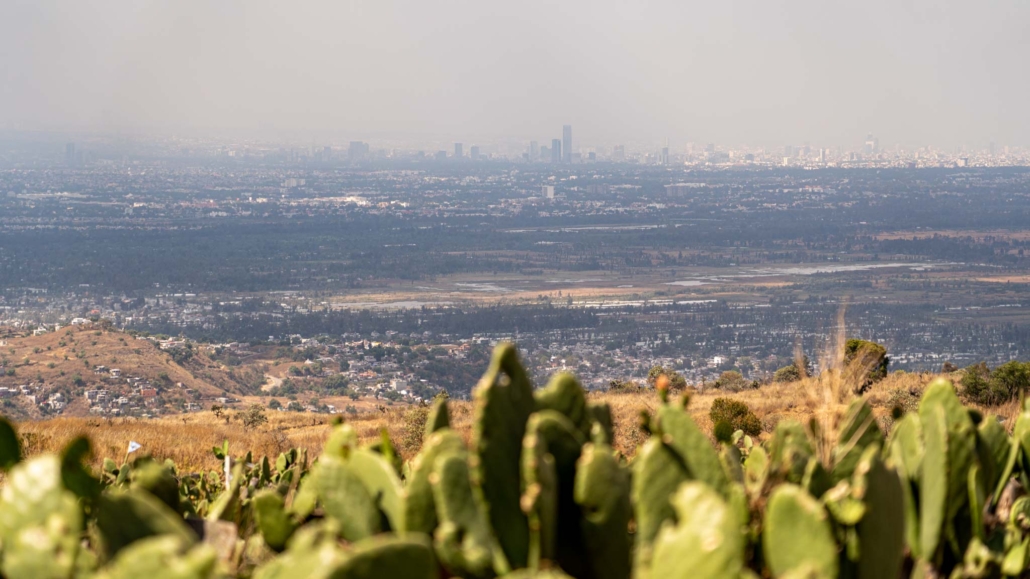 ‘Even us Mexicans don’t know all our foods, it’s very regional, so it’s good to learn,’ another traveller across from me chimes in, highlighting just how vast and varied the gastronomy of Mexico is between states. Even with Nopales, I learnt that it’s more common to eat them inside dishes in the north and centre, while in the north, the BBQ dishes reign supreme.
Discover and book the tour yourself on the Ruta Páak’am website. *Note: There are two options for this tour, one including the volcano hike and one without for those who may not wish, or be able, to do so. Contact Ruta Páak’am directly to find available dates and book your tour.

Amongst one of the largest Nopal farms in Mexico, and a substantial part of the local economy, the air was fresh, the breeze relaxing, and the verdant setting a welcome sight.
With the Nopal farms set up as a co-operative, everyone discussed the idea together of how they could harness tourism to not just share Nopal knowledge but also re-invest in community and ecological projects, such as turning organic waste into fertiliser, something they have started working on alongside local universities. 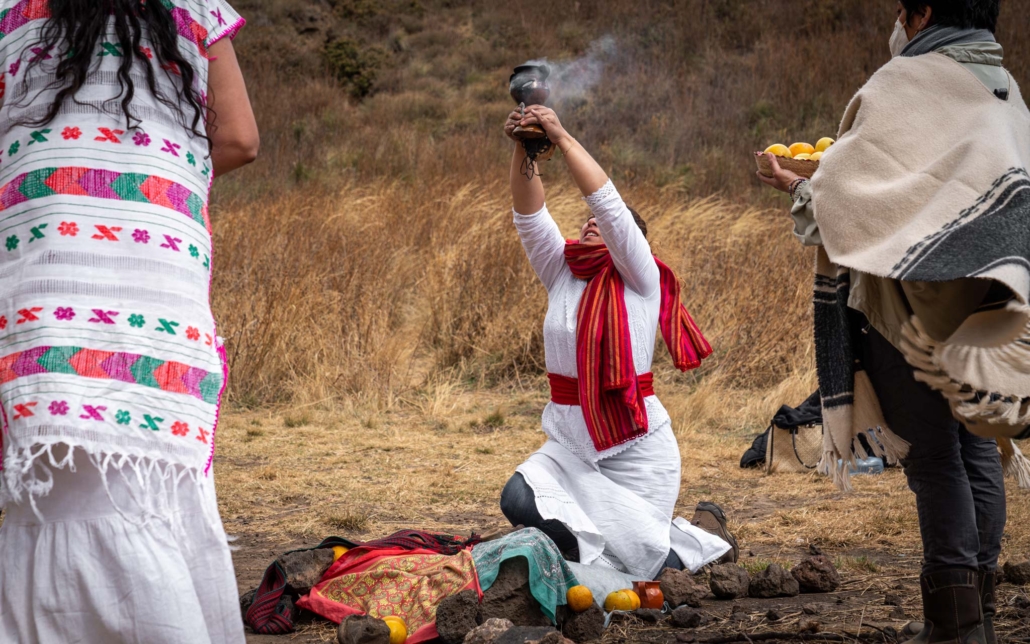 In a patterned outfit with a red fabric tie, the lady leading us signalled it was the last chant. We all silently paused before sharing what we were thankful for in these lush lands for a while.

My visit to Mexico was in partnership with the Tourism Recovery Programme – you can learn more about how this fund and mentorship is supporting local businesses on the link, and find more information about the partners powering the programme on their websites: TUI Care Foundation and enpact.