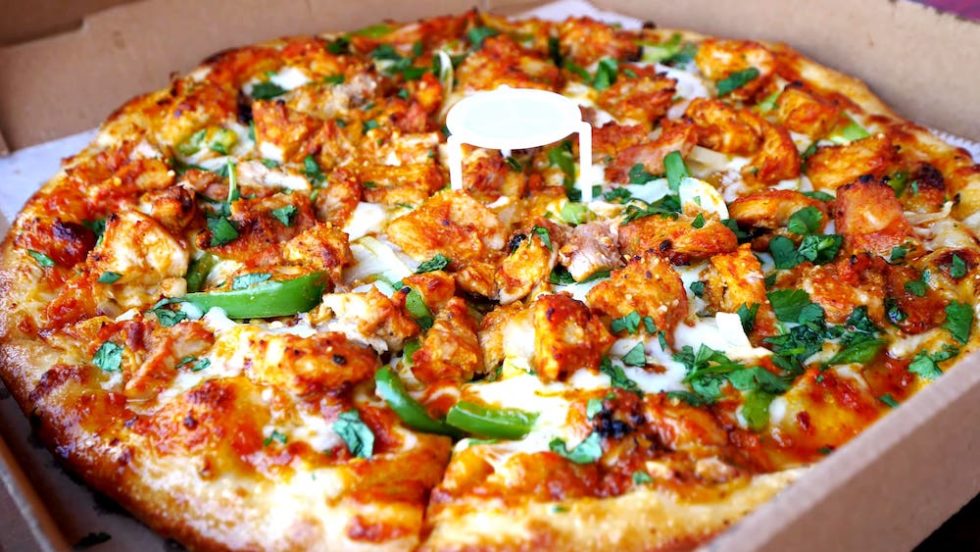 At our final spot, we headed to Tandoor Pizza and Desi Cuisine, where they make northern Indian food and Indian pizzas! There, we ordered a small, hot butter chicken pizza with green peppers. It was really spicy and contained arugula and was full of flavor!
I hope you liked coming with us on our eating Indian food for 24 hours adventure in Sunrise, Florida! If you did, please give this video a thumbs up and leave a comment below. Also, please subscribe to my YouTube channel and click the notification bell so you don’t miss any of my travel/food adventures from around the world!
Then, we had the chicken biryani with our hands. It was amazing. I love eating with my hands and mixing the other curries into it. Finally, we finished with a creamy rasmalai with saffron and some gulab jamun. They’re both super sweet!
What an incredible day of eating Indian food for 24 hours in Sunrise, Florida! Huge thanks to my boy Patrick for joining me on this adventure. I had a blast teaching him all about the wonders of Indian cuisine!
In the kitchen, Yash hooked us up. They use whole wheat rotis in their tacos and have a mix of veg and non-veg dishes. They have dishes like chicken tikka masala, chicken curry, butter chicken, chicken biryani, rice, naan, channa masala, palak paneer, and shrimp Madras. We also had three Indian craft beers!
We met my boy Carlos inside and watched them grill a dosa, which is a crepe made of fermented batter of lentils and rice. It’s served with different chutneys and a tomato-based vegetable soup called sambar. Then, we also watched them grill some uttapam, which is a thicker pancake that contains lots of vegetables! 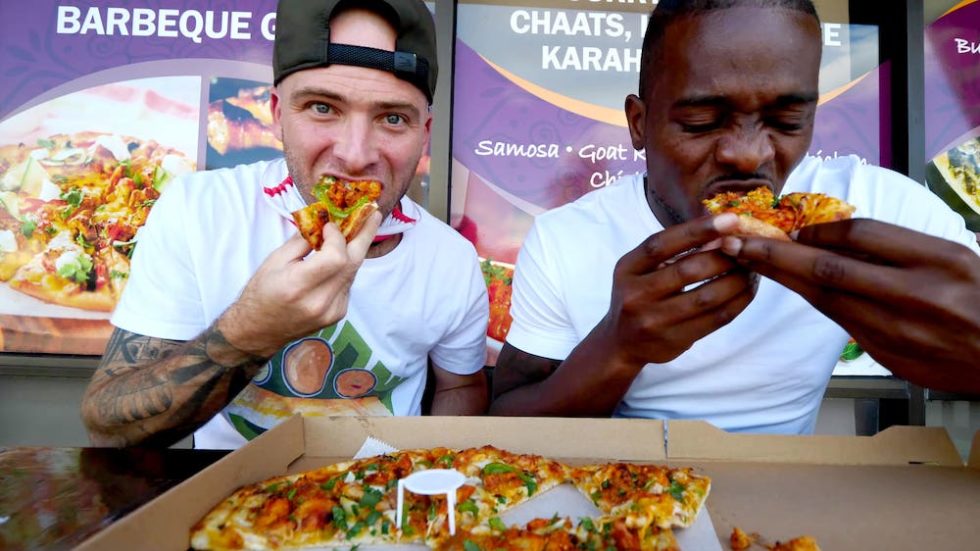 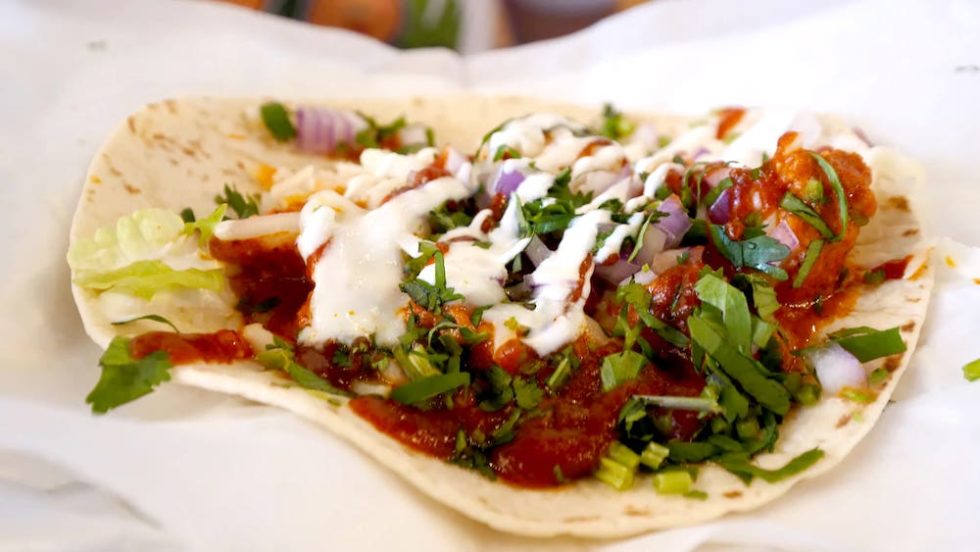 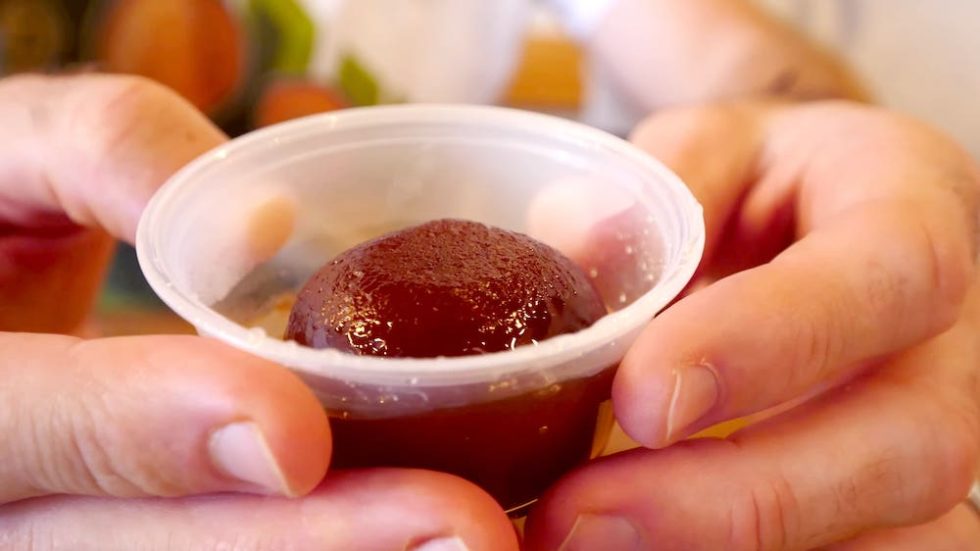 Sunrise is located roughly an hour north of Miami and is known for its Indian restaurants. Patrick and I were going to hit up three of them today, starting with a south Indian breakfast at Woodlands Veg Indian Cuisine. I couldn’t wait to have some dosas! 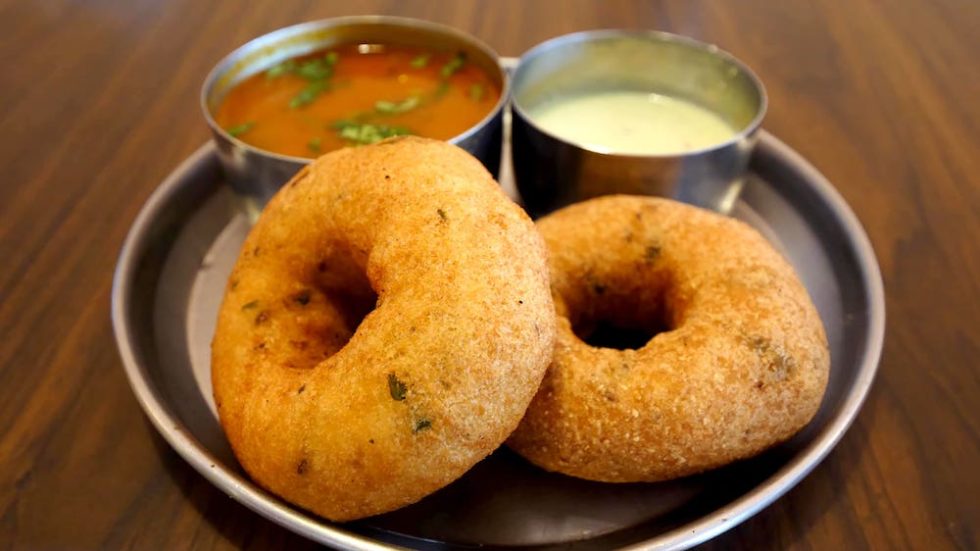 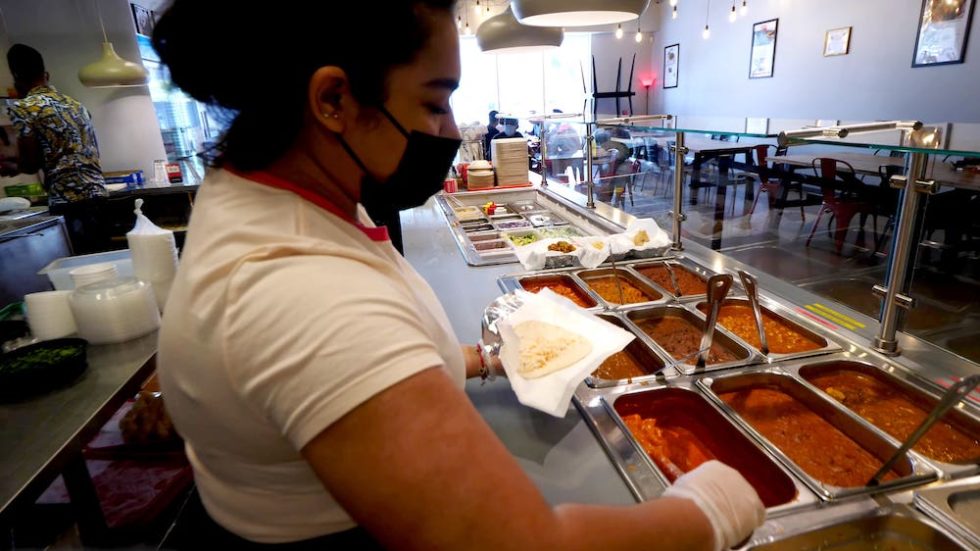 We started with cheese pakora, veg pakora, and aloo samosa, which came with mint chutney and a tamarind chutney. Both chutneys were sweet. The cheese pakora was like a Venezuelan cheese fritter, while the veg was great with the mint-chili chutney.
It’s less crispy but more complex! It’s my favorite way to start a morning and is full of flavors and amazing textures! Then, we finished with a mango lassi, which was a little thick and full of mango flavor! 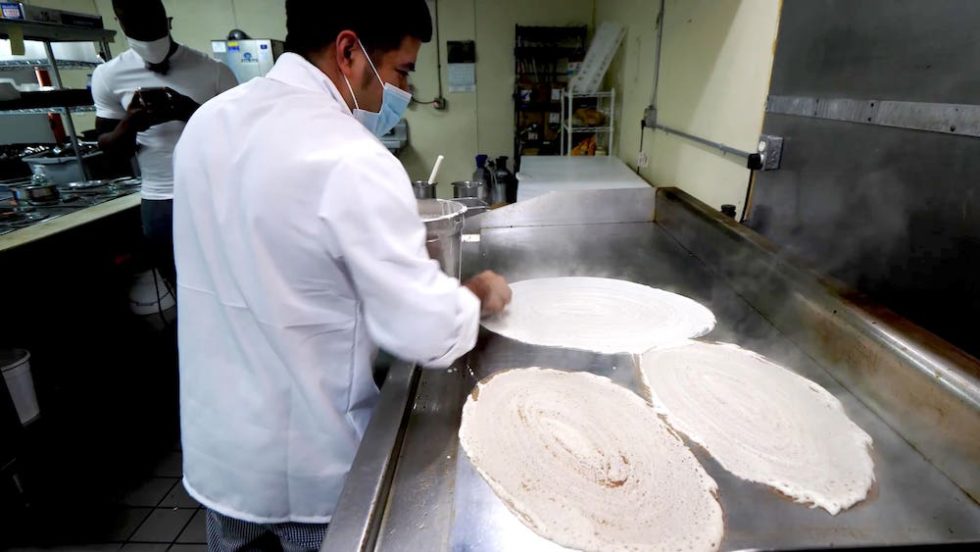 Then, we had the palak paneer, butter chicken, shrimp Madras, and chicken curry with the naan. The butter chicken was creamy, while the palak paneer was a creamy, thick spinach. I loved the succulent shrimp Madras and the light gravy on it.
[embedded content]
My chicken tikka masala taco with parsley, cheese, and onion was nice and spicy. It was my first Indian taco and I loved it! 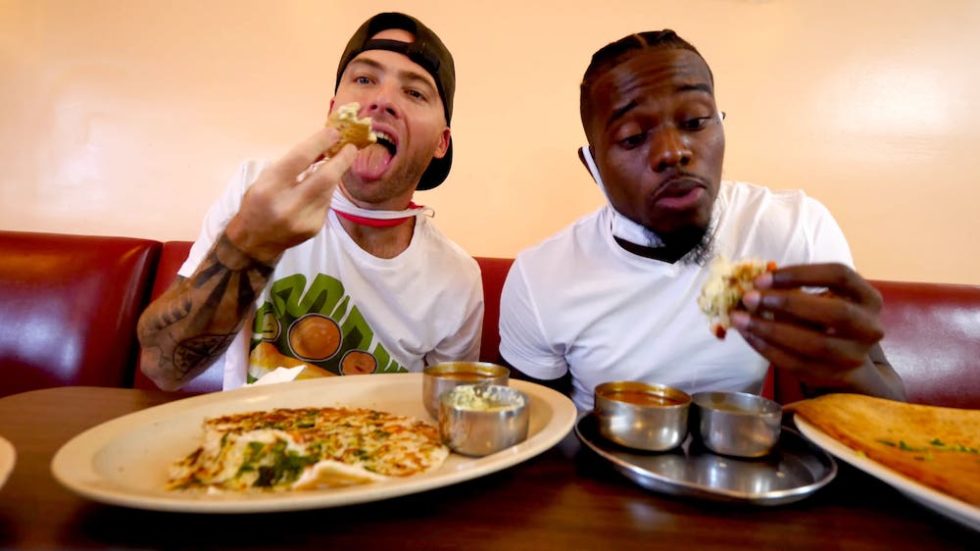 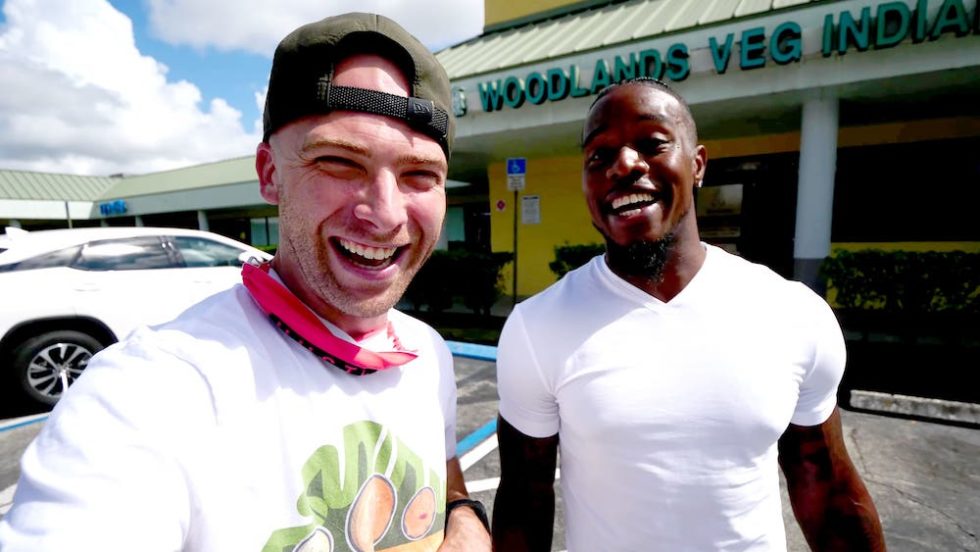 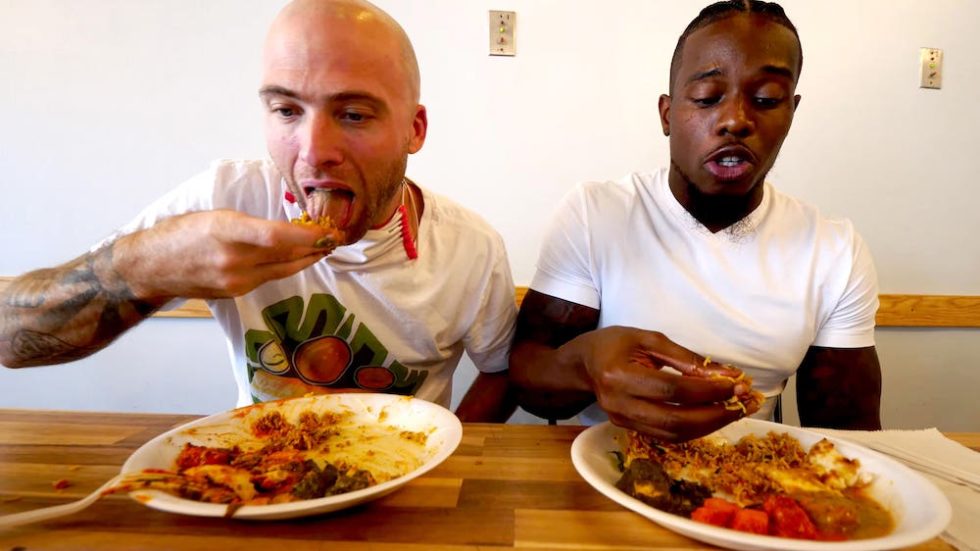 This was Patrick’s first time having a south Indian breakfast! Our dosas were paper thin. We also had my favorite chutney, coconut, as well as some vada, which is a savory doughnut. The vada is also salty and goes well with the coconut chutney and the tomato-rich sambar!
One of my favorite things to do when I’m at home in Miami is to eat nothing but Indian food for 24 hours straight in different cities around Florida. This time around, my eating Indian food adventure is taking place in Sunrise, Florida, and I’m being joined by my boy Patrick Blackwood! 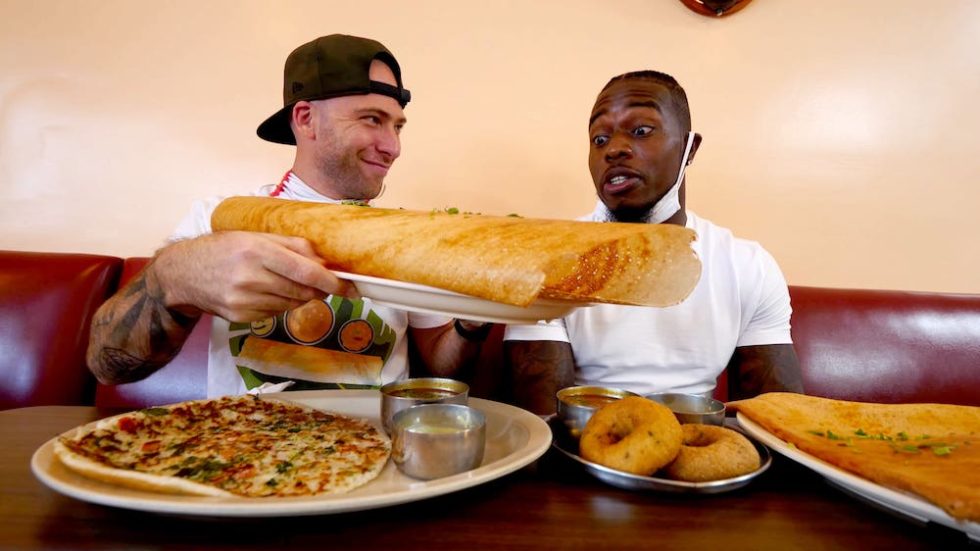 Then, we continued our eating Indian food for 24 hours adventure in Sunrise, Florida with our dosas! The masala dosa was both crispy and doughy and absorbed the flavor of the coconut chutney. The paper dosa was much crispier! Then, we jumped on the Mysore masala dosa, which contained aloo and a spice mixture.
Next, we drove over to Arun’s Indian Kichen location in Sunrise, AIK Taco Masala, for lunch. The owner, Yash, is a good friend of mine. You can order tacos and bowls or Indian entrees. The food here is more northern Indian!
Where have you been?