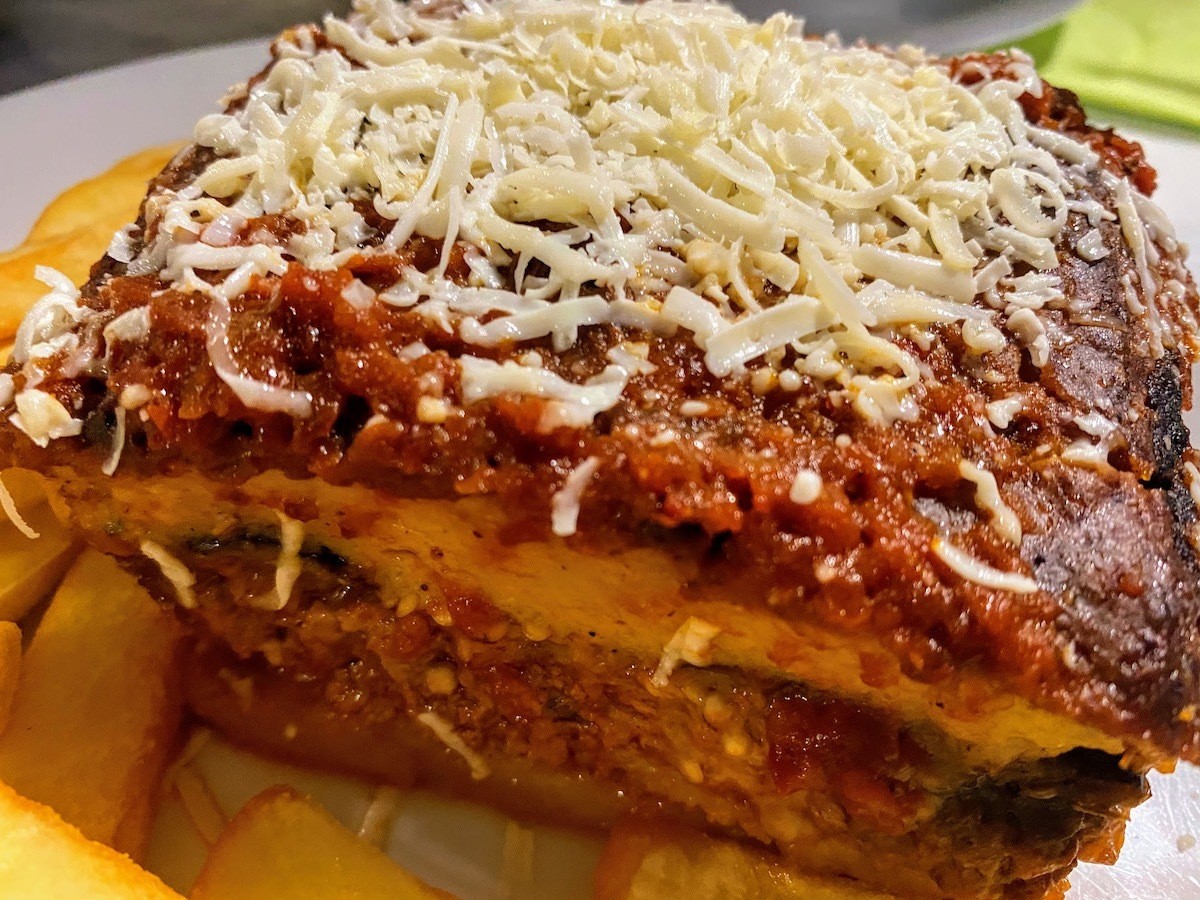 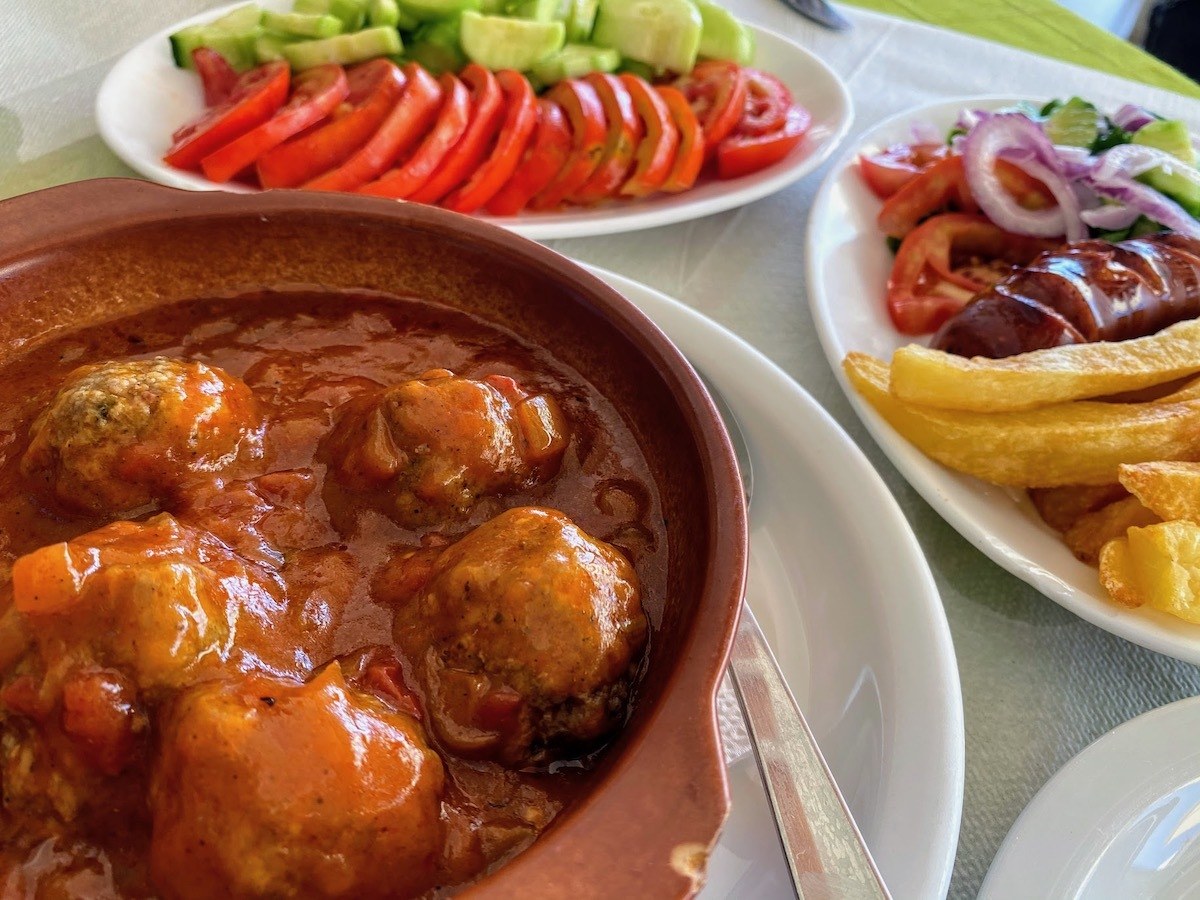 Vegetarians can eat very well in Greece. Traditional Greek food may be biased towards meat and fish, especially when it comes to main courses. However, vegetables play an important role in Greek cuisine so there is plenty on the menu for veggies. Typically, veggie food will be found on the meze, appetisers and side-dish sections of the menu (meze is Greek tapas). But don’t feel side-lined. Ordering a few of these dishes will give you a varied and substantial meal. I’ve included a few of the most popular Greek vegetarian dishes below.

Here are the best traditional Greek foods to try in Greece (or at your local Greek restaurant near home).

Yemista or Gemista means stuffed. What gets stuffed is up to the chef but tomatoes and peppers are the most popular options. Eggplant (aubergine) and zucchini (courgette) are other common summer stuffed vegetables. For the stuffing, expect fluffy white rice cooked with onions, garlic, and herbs such as parsley, mint and all-spice or cloves. The vegetables are then coated in olive-oil, to help the vegetables soften rather than dry as they bake. Traditionally, cheese has no part in Greek stuffed vegetables. If you decide to ‘go rouge’ and add it at home, good for you – just skip the aromatic herbs. Yemista is another great vegetarian choice in Greece but make sure minced beef isn’t in the dish since it’s a popular addition. This would usually be marked on the menu.

We’re not talking sardines in a can, coated in a tomato sauce; sardines in Greece are the real-deal – fresh from the sea, cooked and served whole. Sardines are a summer dish in Greece, served mostly in July and August. To taste the authentic flavours, look for them simply grilled with olive oil and lemon. Great served with fries for a Greek twist on fish and chips.

Is there vegetarian and vegan food in Greece?

It’s close to impossible to go to Greece and not try the Greek olive oil since it makes up the base of so many Greek dishes, but try it on its own with pita bread dipped in and you’ll start to understand why Greek food tastes so good. Add an order of Greek olives and you have the simplest most natural appetiser available in Greece. Kalamata and Crete produce some of the best olive oils in the world. And there is a wide variety of Greek olives to try – not just black and green. Look out for Kalamata, Halkadiki and Conservolea. Ask your waiter – they’ll be thrilled you’re interested.
I can’t finish this article without a mention of the main Greek drinks you have to try. Traditional and popular, work your way through this list:

If there was ever an example of the Mediterranean diet at its finest, it’s a bowl of Greek salad. Crisp lettuce leaves, juicy tomatoes, cucumber, sharp red onion and salty olives form the salad bed. The main ingredient – a slab of tangy, creamy feta cheese (and it often is a slab rather than cubes) is placed on top. Add salad vinegar and oodles of olive oil because, as one Greek chef told me – ‘Greek salad without olive oil is like sex without orgasm’. I’ll just leave that there and hope I’ve not ruined your salad too much.

What? More beef. I know. Sorry, Greek is a very meat-heavy country and this list of traditional Greek food wouldn’t be complete without kefteses on the menu. Greek meatballs are as they sound, meatballs, but unlike their Italian counterparts, are made from beef and sometimes pork mince flavoured with garlic, onion, parsley, oregano, red wine and a hint of mint. While they’re usually served as an appetiser alongside tzatziki and pita bread, you can easily turn them into an entree if you add a salad or rice.

I first tried lamb kleftiko on my very first visit to Greece and I still remember the richness of this divine dish. As with a lot of Greek food, all you need is the ingredients and time – the flavours do all of the work. Kelftiko is simply lamb shoulder, bell peppers, onions and potatoes, infused with olive oil, lemon and garlic. Slow-cooked in parchment paper, it’s not a quick dish but it’s worth the wait.

If I could only eat one Greek food for the rest of my life, it would be moussaka. Think of it like a greek lasagna where the beef is replaced with lamb, the pasta is replaced with sliced potatoes and grilled aubergines, and the flavours wander closer to oregano and cinnamon than the punchy basil of lasagna. A delicious béchamel sauce tops it off. Comfort food in every bit. Yes, even in the sunshine.

I need to get this out the way: I loathe zucchini (courgette in my native England), so it’s hard to write anything positive about it. But, in the interests of being objective, kolokithokeftedes, zucchini balls are very popular in Greece. It’s a traditional dish from Crete and what might save it is the fact the zucchini is grated, combined with onions, flavoured with parsley, mint and then bound with egg and feta cheese. Rolled into balls, the kolokithokeftedes are deep fried until crisp and golden. The result is a delicious veggie appetiser. Maybe I should try them. But first I need to learn how to pronounce it.

I always feel like I’m glowing when I return from Greece, and it’s not just the sun. From Greek yoghurt breakfasts to al fresco lunches of grilled meats, fish and lashings of olive oil, the Greek Mediterranean diet will leave you feeling in peak health. Sure, there are some indulgences to be had – I need saving from myself when I’m faced with spinach and feta pie or honey-soaked baklava – but the freshness of the Greek cuisine still shines through.

Weirdly, this is one of my least-loved Greek dishes. But it’s a great option for veggies in Greece. Dolmades are tender vine or greap leaves stuffed with rice that’s been spiked with lemon, dill, onion and parsley. Every family has their own recipe and comparing dolmades across restaurants is not a bad way to spend your time in Greece.

Sliced, stuffed and baked, papoutsakia, is a more substantial, meaty take on yemista’s stuffed vegetables. With yemistas, rice forms the filling, but with stuffed eggplant, minced beef in a tomato-based sauce replaces the rice. As if this tasty bake couldn’t get more delicious, the eggplant and beef are smothered in béchamel sauce, similar to pastistio, and placed in the oven until the whole thing oozes. I’m no carb counter but this seems like a lower carb alternative to lasagna if you’re looking for one.

I’m on a roll with the beef dishes but sofrito is a little different. Using thin slices of beef or veal, the meat is dusted with flour and slowly sautéed to bring out the flavours. This time, white wine is used to create a sauce and the underlying flavours are garlic, parsley and white wine vinegar. The dish originates from Corfu and is delicious served with Greek salad or fries or both.

That’s my guide to the best traditional Greek food to try in Greece or at home. Did I miss something? Let me know in the comments below. 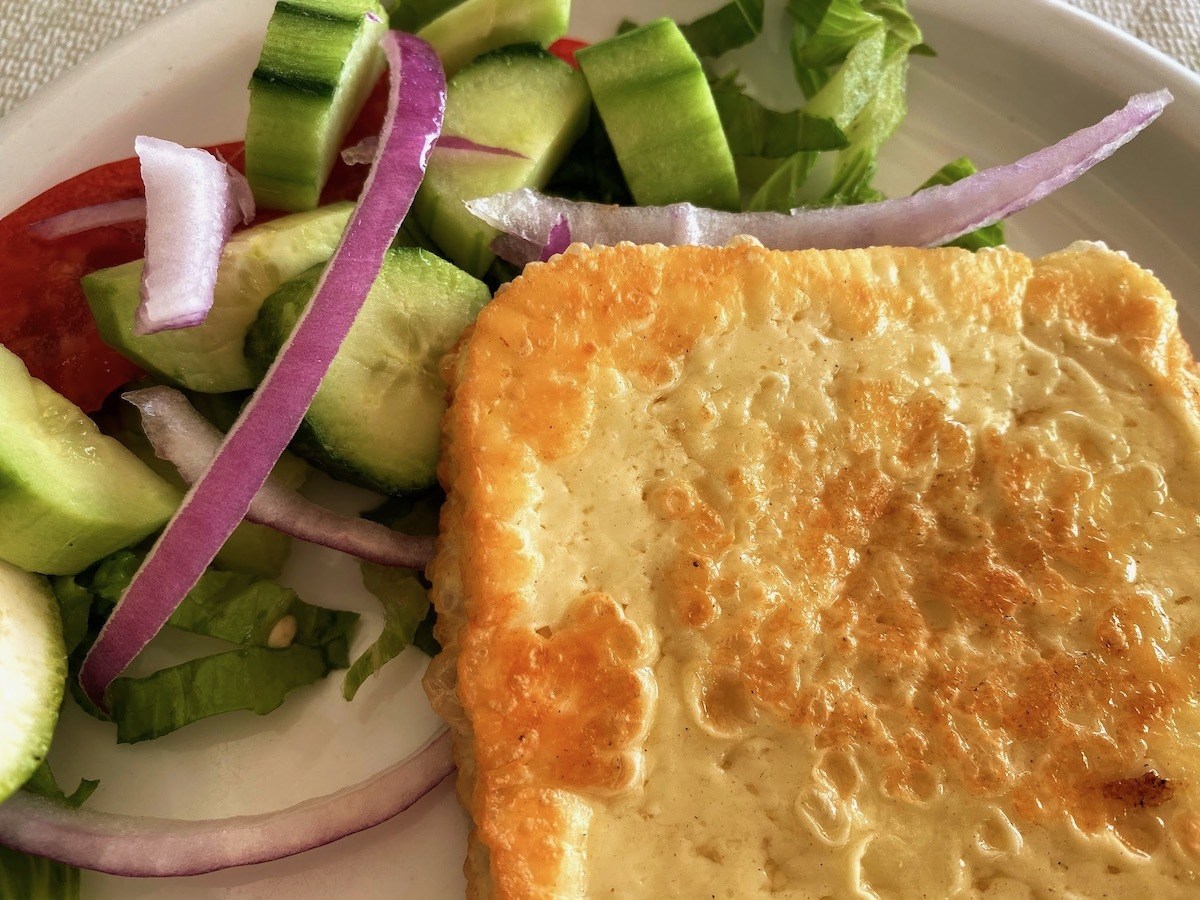 I have a weakness for pastry and cheese so I was always destined to love Spanakopita – a light filo pastry pie filled with feta cheese and spinach. Frankly, the addition of the spinach, which has a subtle flavour thanks to the feta, just makes me justify eating this Greek dish even more. It’s healthy, right? While it’s wonderful eaten hot, it’s also great to pack cold for a picnic on a warm summer’s day.

The ultimate street food, gyros is a magical on-the-go food invention. Comprising marinaded meat, salad, tzatziki and fried potatoes all wrapped in a pita bread, it’s all your food groups in one bite. The meat is usually cooked on a vertical rotisserie spike, and in Greece is typically chicken or pork. The salad is usually cucumber and tomato, and tzatziki is a garlicky yoghurt dip (see below).

I regularly knock up this dish at home. It’s quick, simple and packed with flavour, but tasting gigandes plaki in Greece or at a Greek restaurant is the real deal. The dish comprises butter beans baked in a garlic, onion and tomato sauce. It’s one of the heartier vegetarian dishes you can order in Greece. Just watch out, some restaurants add bacon for a smokey flavour. Tastes great, unless you’re veggie.

Another hearty dish, stifado is a rich beef stew with chunks of beef braised in red wine until they’re so tender they’ll melt in your mouth. Like many Greek stews, the dish is scented with onions – pearl shallots in the case of stifado. Garlic, cinnamon and nutmeg also put in an appearance. Rabbit was the traditional meat but beef is the more popular option in modern stifado.

Well, I had to include at least one dessert and, to be honest, I think this is the only Greek dessert you need – eat it once and you’ll be ordering it over and over. Baklava is a very simple dish of buttery layered phyllo pastry (filo) that’s scattered with nuts and drenched in honey syrup. There’s some debate over the origins of baklava though it’s widely agreed that it was created in ancient times in the Ottoman Empire. You’ll find the type of nuts vary depending where in Greece you order the dish and may be pistachios, walnuts or almonds, but the scent is always cinnamon and cloves. Try sharing a plate unless you have an ultra sweet tooth (and then quickly decide you actually want a plate all of your own). For the ultimate food-fuelled high, order it with a thick Greek coffee.

I’m putting souvlaki next because it’s so similar to gyros. Technically, souvlaki is grilled skewers of meat. Again, usually chicken and pork but you can find lamb, beef and even fish souvlaki. Since souvlaki is commonly served with tomato, cucumber, pita bread and tzatziki, I call it a posh-person’s gyros – the same dish, served on a plate. As a bonus, you might get fries or rice (or both) on the side. Souvlaki is nicer, IMO, since the meat isn’t ground and I do like a knife and fork for my food – it’s a ‘keep my dress clean’ kind of thing. 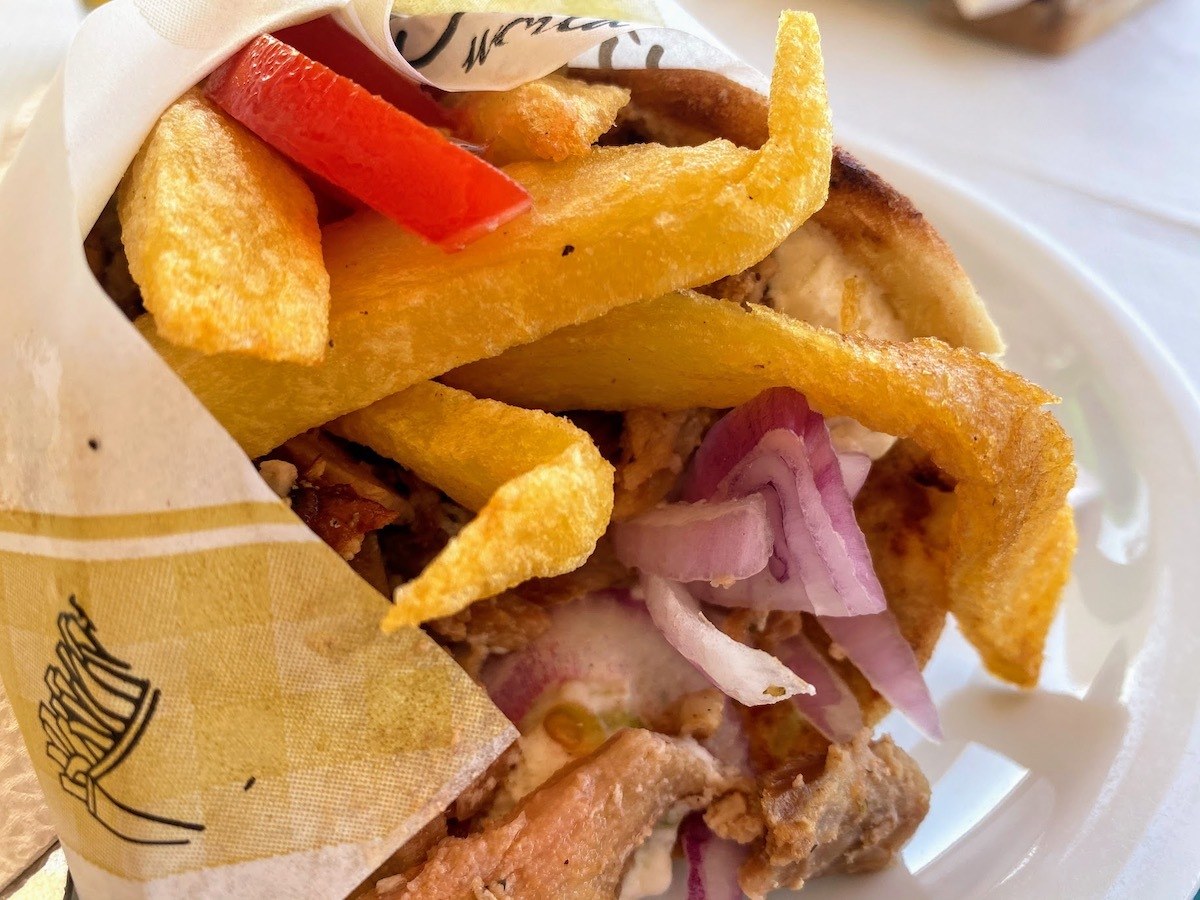 Known as ‘Greek lasagna’, pastitsio is a comforting dish that is a cross between Italian lasagna, a pasta bake and a moussaka. Instead of sheets of lasagna pasta, pastisio uses small tube-shaped pasta like penne or bucatini, which is coated in a meat and tomato sauce. However, the seasoning leans more towards the traditional moussaka flavours of oregano and cinnamon and all-spice rather than Italy’s basil. Finally, instead of the classic béchamel sauce spiked with parmesan, pastitsio’s creamy sauce is often topped with Greek cheeses like feta, goat’s cheese or halloumi. Bring your appetite and stretchy waistband.